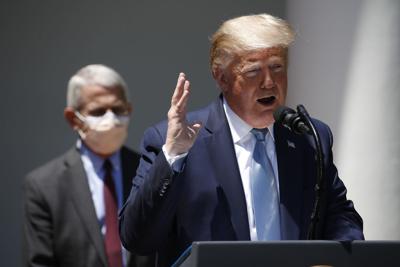 “Ask your doctor” are how all those TV ads for prescription medications go, along with the required scary warnings that in rare cases, your head may suddenly explode. Well, one patient who asked his doctor is Donald Trump, who “heard a lot of good stories” how hydroxychloroquine and zinc could ward off coronavirus.

The way Trump, a well-established liar, told it Monday, the White House physician said OK and wrote the prescription for him to take the pill daily. A week and a half later, so far, so good, says the huckster who calls himself president.

We trust the White House doc would only prescribe a drug he believes to be in the best interest of his patient. We pray there was no undue pressure from a man who’s called the drug a “game changer” as evidence to the contrary has mounted, including warnings from the FDA it presents serious risks to the human heart.

By touting the pill to millions, Trump now encourages countless people to besiege their doctors with pleas for their own prescriptions, leaving lupus and rheumatoid arthritis patients who truly need the now-scarce drug high and dry. Bad medicine indeed.

A far better use of Trump’s time would’ve been showing the world how easy it is to get tested for COVID. New York Gov. Andrew Cuomo did his nose test on TV Sunday. Monday, he reported back negative.

Trump says that he doesn’t like the nose test. Instead, he’s thumbing his nose at the experts again — with potentially fateful results.

OUR VIEW: Hagedorn has shown considerable independence in less than year on high court

Plain Talk: Thanks, anti-vaxxers, for my breakthrough COVID case

"What angers me is that we could be well beyond this seemingly endless crisis if as a nation we would have pulled together."

From lying about House Speaker Nancy Pelosi to distorting the conversation about race in America, Republican leaders lean into the politics of division.

Let me set the scene for you: It was about noon on a spectacularly hot day at Sun Prairie’s Renstone Park. The forecast had called for a high …

"The Legislature is spending the public’s money to keep the public from seeing these records, contrary to the wishes of the main person they concern."

Tutto Pasta on State Street cares deeply about the future of Madison. We support bus rapid transit (BRT), and agree that it has the potential …

Wisconsin gets an F in civics, US history -- Michael J. Petrilli and David Griffith

Wildfire situation may worsen this week