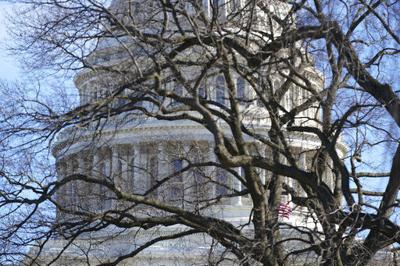 First, let’s be candid. President Donald Trump bears responsibility for the tragic events of Jan. 6. He lied to his supporters, insisted that his “sacred landslide” election was stolen, and suggested that Vice President Mike Pence should or even could reverse the outcome. He then dithered for hours as the vice president, the Congress and its employees were in mortal danger, castigating Pence as a coward.

Many of my colleagues carry a heavy share of blame as well, jumping into the fray for political advantage. And of course, those in the insurrectionist mob who chose to desecrate our seat of government, attack our police and embarrass our country must face the full force of the law.

In wake of this tragedy, failing the president’s resignation, a swift and strong censure from Congress is the most prudent path forward. Yet House Democrats refused our good-faith offer of censure. Instead, they have rushed to impeach the president even though any trial in the Senate would likely begin after he leaves office, and therefore it will not remove President Trump from office and is unlikely to prevent President Trump from holding office again. Many among their ranks, apparently including Speaker Nancy Pelosi, also believe Republican members of Congress who objected to the Electoral College vote deserve to be expelled from the body.

This is not wise. It will not advance the cause of justice. It will not restore our constitutional order. If anything, it will simply feed a cycle of enmity and polarization, which is already spiraling further out of control, chilling speech and silencing debate. We must break that cycle, whatever the cost to our own careers and however unsatisfying to our own sense of anger and outrage.

That cycle, fed by and feeding on mutual distrust and recrimination, did not start on Jan. 6. It did not begin with President Trump’s election. It is not likely to end soon. But if we act with prudence, we can at least begin to reverse course. We can work to rebuild rather than erode trust. We can step back from the ledge. Everyone in Congress, House and Senate, Republican and Democrat, should commit to that goal.

We do not know all the pertinent facts about Jan. 6, and we likely will not know them until well after President Trump has left office. We know that the president enflamed the crowd and encouraged them to march toward the Capitol in a show of resolve. But we also know that he did not tell them to lay violent siege to the Capitol.

That semantic distinction matters. Impeachment is a political tool, but its credibility with the public hinges on charges matching the facts. The fact that the president urged a peaceful march, however irresponsible in context, will make an 11th-hour impeachment for “Incitement to Insurrection” look partisan and pointless.

A second partisan impeachment will create more and not less cynicism among the American people. Done hastily, it will sow confusion and distrust. Delayed until summer, it will collapse. A second failed impeachment will dramatically empower, not diminish, President Trump.

This is not a time for such fruitless games. It is a time for honesty. We are here because America’s elected leaders have been lying to the American people. President Trump’s denials about the election may have been the most conspicuous of these lies, but he is not alone. Leaders of both sides have spent the last four years cashing in on temporary outrage.

The proverbial chickens have come home to roost. The American people do not trust us.

We need to earn back their trust. The American people demand accountability. They especially cry out for justice for Capitol Police Officer Brian Sicknick, who was beaten to death by members of the insurrectionist crowd.

To give them justice, let us start by telling the truth. Why was security at the Capitol so light? Why did it take so long to call out the National Guard? What happened to the chain of command? Did anyone in the White House speak to participants in the riot? If so, who and when and to what ends? What did the president say and do during the multi-hour gap between his speech and his tweets telling the rioters to go home? The American people want to know the real answers to these questions. They deserve to know.

Congress should empanel a special investigatory committee, with subpoena power, to establish and then publish the facts surrounding Jan. 6. The committee should have an equal number of Republicans and Democrats. Its meetings should be closed to the public and its members and staffers should commit to a gag order. Service on this committee must not be an opportunity for grandstanding.

If the special committee uncovers criminal wrongdoing, even if it involves President Trump, that information should be transmitted to the executive branch for appropriate prosecutions.

Doubtless, a thorough account of the events of Jan. 6 will also reveal acts of great bravery. We have already seen video of police officers putting themselves in great danger to protect us. We owe them all a debt of gratitude. The American people deserve to know those facts, too.

This will not be possible on the path of impeachment. The House has passed articles, but the Senate will likely acquit. Along the way we will get more grandstanding but little truth.

Even if the Senate were prepared to convict President Trump, disqualifying him from running for president a third time expresses a fundamental lack of faith in the American people. President Trump has lost my support — permanently. Yet this decision, ultimately, is up to the American public. Previous disqualifications prevented local corruption from infecting federal officeholding. That is a good and responsible use of the disqualification power. Yet if we, as a Congress, put special fetters on who can run for president, then we may as well just admit that we do not trust the American people to make a wise choice.

Perhaps that is what some of my colleagues believe. I do not. The American people want a Congress that works for them, not for retweets. They want legislators, not pundits. And they want to be told the truth. We all had a hand in creating the toxic environment that blew up on Jan. 6. We are going to have to work together to fix it.

I disagree with U.S. Rep. Mike Gallagher's column in last Sunday's newspaper, "Why I voted against impeachment."