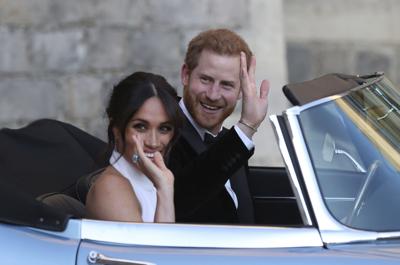 The last time we heard that Meghan, Duchess of Sussex, was in Chicago, it was just before her May 2018 wedding to Prince Harry. The former Meghan Markle, a Northwestern grad, was spotted at O’Hare International Airport in a White Sox baseball cap, apparently in town to complete her United Kingdom visa application.

Then, as the world knows, Meghan became royalty. She had a baby, Archie, who is seventh in the line of succession to the throne, right behind his dad. But we can’t say the couple lived happily ever after. They are struggling to cope with attacks by the aggressive British tabloid press and sound as if their castleactually, Frogmore Cottage in Windsor — is a prison.

Harry is fed up with life in Britain. He fantasizes about moving his family to Africa. Meghan seems despondent. “I have said for a long time to H., it’s not enough to just survive something, that’s not the point of life. You’ve got to thrive, you’ve got to feel happy,” she said in a new British television documentary., according to the Times of London.

Maybe it is time for a change of scenery. Since Meghan knows Chicago, and this city has been short on royalty since Michael Jordan and Oprah Winfrey left town, we thought we’d put it out there. Duke and Duchess, come experience some Midwestern hospitality.

To catch you up on the drama: Meghan is an American-born former actress from Los Angeles who studied theater and international relations in Evanston, graduating from NU in 2003. She spent years in Hollywood and might have thought she was as preparedas any outsider to enter the glamorous, gilded world of the British monarchy. After all, celebrity culture is big business on both sides of the pond.

Turns out there’s a reason people left Britain for the colonies centuries ago. The social and political atmosphere in London can be unbearable. Harry complained from the start of his relationship with Meghan that she was being harassed by social media trolls and abused in commentary pieces that smacked of sexism and racism. He sued two tabloids for alleged phone hacking. She sued another for allegedly publishing a private letter to her father. They’ve been attacked for going on vacation by private jet and spending $3 million to refurbish their home. Harry sued and won after a paparazzi agency flew a helicopter over their previous Cotswolds home, taking photos of their living quarters.

The paparazzi incident is a sad clue to the couple’s troubles. Harry acknowledges being haunted by the death of his mother, Diana, Princess of Wales, who was killed in a 1997 car accident in Paris as her speeding vehicle was chased by photographers. In a recent statement, Harry said: “I lost my mother, and now I watch my wife falling victim to the same powerful forces.”

The British public seems split on the plight of Harry and Meghan. There’s a lot of clucking that members of the monarchy should recognize that extreme wealth and privilege come at the cost of being objects of fascination. But there’s sympathy, too, for a newly married couple who are hurting. She’s an outsider adjusting to life as a symbol in a foreign culture; he’s traumatized by the death of his mom.

The pair plan to take six weeks off from royal duties for “family time” and may head to Los Angeles for Thanksgiving. That sounds like a good idea. They should come to Chicago, too. Maybe shop for a condo. Sure, Chicago has a vigorous media, but we’re too focused on the city budget crisis and the collapse of the Bears to obsess over one more young family moving to Logan Squareor the West Loop.

Meghan and Harry, you are royally invited.

There’s something special going on at the nexus of conservation, agriculture and the food supply chain in America, and the rest of us would do well to learn about cooperation and collaboration from those working in that space.

To allow a merger to go forward between Dean Foods and DFA is to endorse the crooked dealings of these food industry giants who routinely seek to profit for the few at the expense of the many.