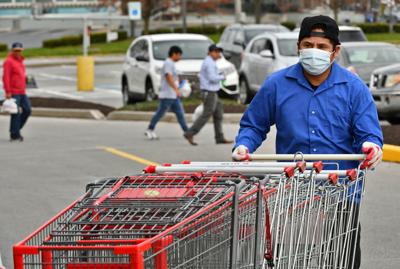 The sentiment of hoping for a day where Wisconsin was more normal again goes much wider than just that group. Many in that broader group, however, were astute enough to stay home until it’s safer for the health of all of us to go out.

But one massive barrier prevents Wisconsin and, for that matter, anywhere from reopening.

We need more testing. The medical professionals have told us time and time again it is not wise to go back to “normal” until we have the capacity to test far more people. We also need to be able to trace those who have been infected with the novel coronavirus, and who they may have come in contact with.

We’ve barely tested more than 5 million people nationally, and the daily numbers are still a small portion of what we actually need. Recently, Dr. Anthony Fauci said we need to, at minimum, double testing capacity. Others have said we need to triple it.

And yet the federal government response from the Trump administration has been pathetic.

When Gov. Tony Evers asked the Federal Emergency Management Agency (FEMA) for supplies on March 26 and 28, we waited nearly four weeks to get our first swabs directly from them. The Centers for Disease Control and Prevention got us about 5% of the plastic tips we requested, less than 1% of the reagents we requested to run tests, and about 25% of one type of test kit. Most of the governor’s request for testing supplies went officially unanswered.

You can’t reopen a state or a nation safely without getting more testing, and that means testing beyond just those showing symptoms.

So what has to happen?

Well, first, we need the president to order more U.S. companies via the Defense Production Act to produce what we need for testing now. Unfortunately, as a nation we’ve relied on China for the production of too many goods. We need to start producing items domestically again in the United States.

Second, we need a central management of testing supplies, as well as reagents and personal protective equipment. That should be FEMA, but they’ve been relegated to making sure the private sector has some supplies to sell state by state. That’s not enough. That’s not even a real response.

And third, we need to take advantage of the biotechnological companies across the country that can step up to make the very goods and supplies we need, such as Promega and Exact Sciences have in Wisconsin.

Promega is making reagents that are required to run tests. And Exact Sciences is performing the COVID-19 tests here in Wisconsin.

That may be one of the brightest spots. How many companies could so quickly run a large number of tests? Well, Exact Sciences has converted its capacity to run colorectal cancer screening tests to run COVID-19 tests. And it has seriously upped its game to the point it could be running 60,000 tests a week for Wisconsin alone, today. At full capacity, it could run 120,000 tests a week.

We in Wisconsin need to take full advantage of this ingenuity. As we struggle to perform tests in the low thousands daily with the limited supplies we have in our state, they are able to perform a much more robust number — the very type of numbers we need to reopen more safely.

The governor also could order more targeted testing in our nursing homes and assisted living centers, for our front-line personnel caring for and protecting us, and for the variety of our state health care systems to test more routinely than just for people exhibiting symptoms. To help manage this expansion, we must also use the state Department of Administration more effectively to help coordinate the increased level of activity with testing.

It is my hope that the partnership between Wisconsin and Exact Sciences will grow very quickly to fill the gap that the Trump administration has created. It is unconscionable how poorly this entire pandemic has been handled by President Donald Trump. We in Wisconsin can go a very different direction if we use our local resources to their maximum capacity, and that will allow us not just to reopen more quickly, but serve as a model for the nation.

Bill McCoshen: How we get Downtown Madison back

Strong communities start with a strong downtown. The Downtown Madison website calls Downtown the heart of the city. “Where State Street meets …

John Nichols: Robin Vos is threatened by something he’s unfamiliar with: democracy

Joel Jacobsen is what legislative careerists like Vos fear the most: an appealing opponent who offers voters a credible alternative to the crass political gamesmanship of a dangerously out-of-touch incumbent.

John Nichols: Why Tom Nelson is launching a 2022 U.S. Senate bid before the 2020 campaign is finished

"It's never too early to do the right thing and fight back. In fact, we've waited too long," Nelson says.

Jessie Opoien: Don't take Wisconsin — or the future of the nation — for granted

The question before us is not a policy quibble; it is a choice that will determine the trajectory of the nation — or, as Biden would say, the soul of the nation.

Previous leaders have recognized the power in words that can soothe anxieties or rally a nation during times of grief and disaster. Not this president.

Plain Talk: If Wisconsin's Legislature were a business, Republicans would've already been fired

The only way this unfair and unaccountable grip on Wisconsin's state government will change is if the people decide enough is enough, safe gerrymandered districts or not.

Laura Lane: Let's debunk arguments on why Wisconsin can't get rid of coal

Burning coal costs us. It is responsible for one third of carbon emissions and pollutes our air and water. Renewable energy moves Wisconsin forward.