Llewellyn King: The energy executive and the homeless -- sleeping on concrete
Share this 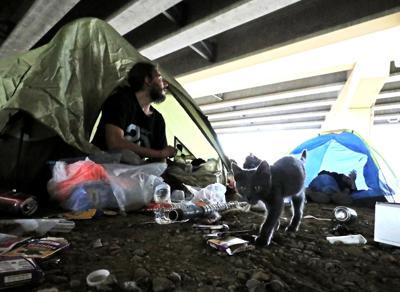 It starts the day when all the support systems — fragile as they often are — fail. When there is no home to go to, no bed to sleep in, no meal to eat, no toilet to use, no place to wash even a face — just the hard, cold and often wet streets that offer no succor. The hospitality of a concrete sidewalk is scant.

That is what faces 4 million luckless children each year in the United States, according to Renee Trincanello, chief executive officer of Covenant House Florida, which operates shelters in Fort Lauderdale and Orlando. Once they hit the streets, they are vulnerable to every horror that can happen to a child, including sex trafficking. “They also are used by drug dealers to inculcate a habit,” Trincanello told me.

In the United States, homelessness is at a crisis point. Cities are clogged with the homeless from coast to coast. If you travel a lot, as I do, you are aware of how homelessness is at its most conspicuous where there is prosperity — a byproduct of high rents in cities like San Francisco, Austin, New York and Boston. (And Madison. Read the Wisconsin State Journal’s special report at go.madison.com/homeless-Wisconsin.)

Very close to the Capitol in Washington, around Union Station, the homeless sleep on the sidewalks, sometimes with the barest needs met by charities — needs like a sleeping bag, if they have been identified and are lucky. Train stations are a mecca for the homeless because they have public toilets and offer warmth. But Union Station has removed most of its seating to keep out the homeless.

To draw attention to the misery and extreme danger of children sleeping in the streets, and to raise money, Covenant House branches in the United States, Canada and Latin America organize sleep outs. Once a year, executives like my friend Jan Vrins, managing director and leader of Navigant’s global energy practice, takes a sleeping bag, puts it on top of a cardboard box and gets a hard night’s rest on a parking lot pavement.

Vrins says, “It isn’t fun to sleep in a concrete parking lot on a carton box with a sleeping bag. But the time we spend with these youths before we sleep out is wonderful. First, we have dinner with them and have sessions where they share their stories.” Afterward, the children are safely tucked up in the shelter and the adults repair to the parking lot.

In every case, Vrins says, something has happened to them. “Their families have broken up, sometimes because of addiction; there have been storms, as in Puerto Rico, and they end up in the shelters. So, climate change is leading to more kids on the street,” he says.

Vrins says that he was introduced to Covenant House by an executive from Florida Power & Light. “That was 11 years ago, and I got hooked,” he says. Now he is Covenant House Florida’s vice chairman.

Trincanello, who is married with two daughters, has spent her career with Covenant House. She told me that her father wanted her to be a lawyer, so she pushed back and became a social worker.

If you sign up to sleep out with Covenant House, whether it is in chilly Toronto or as, as Vrins notes, more benign Florida, you will join some of the cream of America’s executive talent from Accenture and Black Rock, to Cisco, KPMG and other companies. In fact, prominent companies field “teams.”

Vrins, who is married with two sons, heads the Navigant team. Each sleeper is expected to raise $1,000 for Covenant House. This year, he laid down on the concrete in Fort Lauderdale on Nov. 26. He says 130 people slept out there and raised $270,000.

From your letters to the editor: "Our Republican legislators were sleeping safe and warm in their beds last week while homeless parents had to…

A native of the Netherlands, Vrins is one of those gregarious people who puts his arms around you with his smile. He speaks with passion and love of the homeless children in their crises. Trincanello, who I have not met, has a voice as warm as a winter hearth. I can imagine it melting fear in a scared child. Together they do work that is not a molecule short of noble.

King is executive producer and host of “White House Chronicle” on PBS: llewellynking1@gmail.com. He wrote this for InsideSources.com.