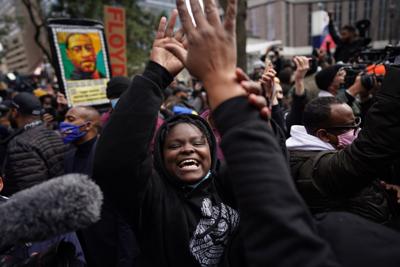 I sat there trying to remember how to breathe.

I suspect I had that in common with people — particularly African-American people — all over the country. Didn’t we all hold our breath as we awaited the verdict in the trial of Derek Chauvin?

Then that verdict was read. The former Minneapolis police officer was found guilty on all three counts in the death of George Floyd and was promptly handcuffed and led off to jail. On television, people shouted and prayed, cranking their fists toward heaven. I just sat there, trying to remember how lungs are supposed to work.

And thinking that justice — real justice — shouldn’t be this difficult. In a nation that was not broken along seams of race, a nation where you could trust the police to actually protect and serve no matter the color of your skin, Chauvin’s conviction would have been a foregone conclusion. But in this nation, it was anything but. That’s why I forgot to breathe. And why, after the verdict, what I felt was less exultation than simply relief.

An American court did right by an African-American man. For a change.

You might, if you are innocent or ignorant of American history, wonder what the fuss is about. After all, the evidence of Chauvin’s crime was compelling and overwhelming, cellphone video that showed him kneeling on the neck of a handcuffed and unresisting man for 9½ minutes while Floyd pleaded and cried. Bystanders begged Chauvin to stop and he faced them with an expression of malevolent nonchalance as if to convey that he was in charge here — his badge gave him that authority — and he would do with this black body what he pleased. As indeed, he did.

So you may, in innocence or ignorance, wonder how there could have been any doubt of this outcome. But see, they also had pictures in 1930 when Thomas Shipp and Abram Smith were killed in Marion, Indiana. They had pictures of Rubin Stacy in Fort Lauderdale in 1935. They had confessions of kidnapping when Emmett Till was murdered in 1955, had video when Rodney King was beaten to pieces in 1991. More video when Tamir Rice was shot in 2014. And Philando Castile in 2016. And Terence Crutcher, also in 2016. And no one was ever held accountable for any of those killings — or for literally thousands just like them.

Point being, nothing is new about compelling, overwhelming evidence. But such evidence has seldom been a match for America’s refusal to know or its stubborn disregard of Black lives.

So what was different this time?

Maybe it’s that this video was particularly excruciating. Maybe it was recognition that the eyes of the world were on us. Whatever it was, it led to a verdict for which we can only be grateful.

But did it lead to change? Did something heavy just shift in the psyche of a nation? Will African Americans henceforth know a new form of justice, one that is not spotty or hit and miss, but that, in the words of the prophet Amos, rolls down like waters?

If would be nice to believe that. But if one is not innocent or ignorant of America, one cannot help but recall all the times belief has gone begging, all the times promise has lied. One is tempered by memory of Trayvon, Breonna and so many others who never knew justice.

Maybe that sounds cynical to you. But these last years have been traumatizing and, besides, I am a Black man in America.

So I’m also sitting here trying to remember how to hope.

"To me, Mahoney was the example of what law enforcement in the 21st Century needs to be about."

Many workers won't return to old jobs after COVID

Many workers won't return to old jobs after COVID