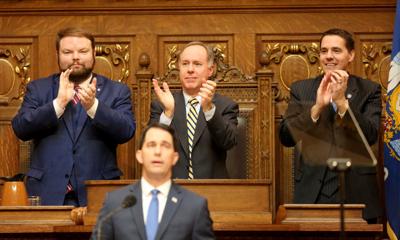 This is no way to run a state government.

Proposals to alter elections, taxes, transportation funding, health coverage and more in Wisconsin were unveiled late Friday by a lame-duck, Republican-run statehouse. Public hearings could be held Monday, with votes in the Senate and Assembly as soon as Tuesday.

That’s not a transparent or thoughtful process, to say the least. Big changes to state law affecting Wisconsin citizens should be debated out in the open, with time for the public to digest the implications.

Lame-duck sessions are notoriously fraught with partisan scheming. This includes the time eight years ago when Democrats lost control of the statehouse. They tried to quickly adopt expensive union contracts before Republicans assumed power. The blatant attempt to undermine the will of voters and thwart the incoming governor blew up in their faces when Democrats couldn’t muster enough votes for the contracts.

Today’s Republicans will say they’re just doing what Democrats tried to do to them. But the Republicans should learn from the Democrats’ mistakes rather than repeating and outdoing them. The Democrats embarrassed and hurt their party eight years ago. And the same scorn is sure to befall the GOP if it goes even further in snubbing voters now.

When voters elected Evers and other Democrats for every statewide office Nov. 6, they didn’t intend for the losing side to ignore their decisions. Yet that’s what’s happening as Republicans — who relied on gerrymandering to help keep control of the Legislature — are rushing to advance troubling proposals that could have many unintended consequences.

The good news is the Legislature appears to lack enough votes for a big-government bailout of a Kimberly-Clark paper plant in the Fox Valley. That would have cost state taxpayers $100 million to save just a few hundred jobs, when the real challenge in Wisconsin is filling open positions.

With that bill in trouble, Republican leaders have pivoted to more partisan priorities. They’re proposing moving the date of the 2020 presidential primary from April up to March. The change would give conservative state Supreme Court Justice Daniel Kelly a better chance at winning the April election if Democratic voters are no longer turning out in large numbers to pick a Democratic nominee for president.

But clerks across the state have understandably objected to the extra work, cost and complication from what would be three statewide votes in just three months in early 2020.

The public should view such blatant scheming with scorn. Wisconsin believes in a deliberate and fair process of passing laws that respects voters. Speeding sketchy bills to the governor’s desk during a lame-duck session violates the public trust.

OUR VIEW: The exiting governor should nix Legislature's lame attempt at sneaking bills past voters