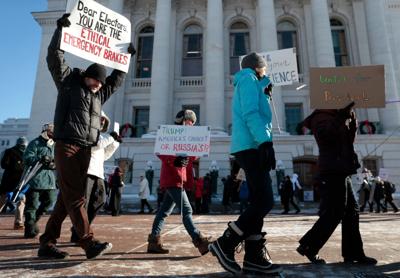 Let’s squarely face an ugly possibility: President Donald Trump could get elected a second time without winning the popular vote. Indeed, according to most experts, that’s the only way he could be reelected.

This would surely prompt another chorus of calls to scrap the Electoral College. I think that would be a mistake.

I say that even as I acknowledge that Trump has undermined the Electoral College’s legitimacy — not because he owes his election to it, but because of how he has behaved since taking office.

One of the Electoral College’s purposes is to broaden the president’s mandate and agenda by forcing candidates to appeal to different parts of the country and not just rack up votes in one region or a handful of states. But previous presidents who didn’t win the popular vote made a point of reaching out, once in office, beyond the coalition that elected them and at least pretending to lead the whole country.

Trump went a different way, effectively putting his thumb in the eye of the majority that didn’t vote for him.

But that’s not an argument for getting rid of the Electoral College, nor does it address the reasons people are mistakenly focusing on it.

The first problem with its elimination is purely pragmatic. Electing presidents via popular vote would be a logistical disaster, rendering every recount a national recount. Moreover, eliminating the Electoral College would require a wholesale revision of the Constitution. That process would almost surely fail, and it would certainly be ugly.

Reasonable reformers understand this, which is why they propose a national compact by which states agree to direct their electors to vote in accordance with the national popular vote.

That would be better than outright repeal, partly because if the compact backfired, it could be easily reversed. But popular elections would still raise problems. Candidates would be incentivized to rack up huge majorities among their bases. An outright majority of votes could be gotten simply with populist appeals to a handful of large, highly urbanized states. If you’re a pure-democracy fetishist, that may sound fine. But how would it lessen polarization?

Indeed, I think polarization, not love of democracy, is what’s driving antipathy for the Electoral College. Prior to 2016, there was a period when Democrats boasted of their “Blue Wall,” which gave them an Electoral College advantage. But once Trump crashed through the wall, many of the same people suddenly declared the Electoral College to be a white supremacist vestige of slavery. (It isn’t.)

For complicated reasons all fueled by polarization, voters, parties and politicians increasingly act as if we live in a parliamentary democracy, casting ballots for a party more than a candidate. Presidential contenders encourage this by insinuating, or stating outright, that winning an election is all that’s required to implement their agenda.

Partisan legislators — and they are nearly all partisans now — vote in near lockstep with their president when they’re of the same party and in lockstep opposition when they’re not.

Our constitutional system wasn’t designed for this dysfunction. The federal system of checks and balances was intended to foster stability and compromise while protecting the rights of political minorities and, crucially, individual liberty. If you really think government should only be answerable to the immediate desires of 50 percent plus one of voters, why have a Bill of Rights?

Such considerations are swept away when voters, parties and political institutions have neither the interest nor the capacity to honor them.

The growing anger at the Electoral College comes from the desire — and expectation — that all your political desires should be fulfilled without constraints simply by voting.

But even parliamentary democracies don’t work this way. Despite all the rhetoric about the Electoral College being anachronistic, very few advanced democracies — and none in Western Europe — elect national leaders without some mediating process designed to filter out demagogues or the unfit. Such mechanisms are arguably more important in our system because we combine the head of state and the head of government in one person. From this perspective, one could argue the Electoral College isn’t too strong, but too weak.

Regardless, the Electoral College, like states themselves, is part of a system intended not so much to constrain democracy, but to channel it productively. Removing it — a major step toward nullifying states themselves — would further centralize government and fuel the disordered politics driving the foolish effort to abandon the Electoral College in the first place.