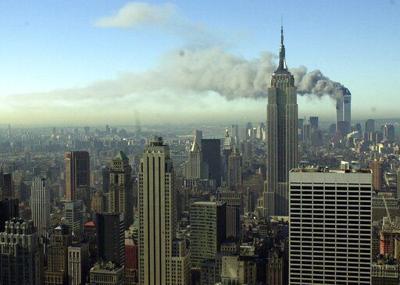 I got back to the U.S. from my honeymoon on Sept. 10, 2001. My wife went straight home to Washington, D.C, to start her new job at the Justice Department. I went to Washington state, where we’d gotten married, to retrieve our dog Cosmo, whom we’d left with family. I was in a hotel room in Pendleton, Oregon, when I saw the first reports of a plane hitting the World Trade Center. I used something called AOL Instant Messenger to tell my coworkers to turn on the TV.

Because my wife and I had dated for a long time, I used to say that the war on terror changed our daily lives more than getting married did. As weird as that sounds now, in some ways it was true. The Washington we returned to had changed. My wife’s new job as the attorney general’s chief speechwriter at the dawn of the war on terror was a bracing new chapter for us both. And politics, particularly conservative politics — my beat, for want of a better term — transformed almost overnight.

I was editor of National Review Online back then, and even though I’d been traveling when the controversy broke out, it fell to me to “fire” Ann Coulter from National Review (which largely amounted to dropping her column). Outraged by airports clogged by security lines, she wrote: “It is preposterous to assume every passenger is a potential crazed homicidal maniac. We know who the homicidal maniacs are. They are the ones cheering and dancing right now. We should invade their countries, kill their leaders and convert them to Christianity.”

While this beating of the war drum was too much even for us, the rhythm of the next decade often echoed this tune. A flood of books both serious and silly poured forth about the war on terror, the imminent arrival of a new cold war or world war, and the “generational” struggle with Islam and Islamists that would define our future and our children’s future.

Two decades later, it seems like the past is a foreign country, and not just for the 1 in 4 Americans who weren’t even alive on 9/11.

We always see yesterday through the prism of today. As historian R.G. Collingwood put it, “Every new generation must rewrite history in its own way.” For instance, after 9/11, the dates that defined the past shriveled. The Bolshevik Revolution of 1917 and the end of the Cold War in 1989 shrank, while 1932 (the founding of Saudi Arabia) and 1979 (the founding of revolutionary Iran) seemed larger in the rearview.

Similarly, we can look back on the excesses of the war on terror and see our reflection there. Many on the left greeted the crisis more as an opportunity to find fault with America than as an opportunity to unify against a common foe. Before the bogeyman of “systemic racism,” there was “Islamophobia” and the vaunted anti-Muslim backlash. While prejudice against Muslims certainly and regrettably increased, it’s worth noting that hate crimes against American Jews outnumbered those against Muslims throughout the war on terror. I’m not sure that’s worth celebrating, but America arguably being the safest place in the world to be a Jew certainly is.

Regardless, from the liberal hysteria about the Patriot Act’s supposedly tyrannical assault on libraries to the right’s wild fantasies that America was surrendering to Sharia law, the terror war now looks like our current culture war by other means.

In the early years, fretting over the threat to free speech posed by the war on terror was a left-wing obsession. Ward Churchill, who called the victims of 9/11 “Little Eichmanns,” was a martyr to free expression. Dissent, we were told, was the highest form of patriotism. When Barack Obama became president, dissent lost its patriotic glow for the liberals who wanted a heckler’s veto against those who would “provoke” jihadists with irresponsible expression such as cartoons or films mocking Muhammad or asinine own-the-libs stunts like Koran-burning. And of course, Donald Trump did, for a moment, put some teeth into the anti-Muslim backlash when he tried to ban all Muslims from entering the country.

Wherever you come down on the specific controversies, it’s hard not be filled with regret and a little embarrassment over the solipsistic tendency of American politics to turn every issue into a stand-in for mutual partisan animosity. Even more depressing is the realization that the last 20 years have left us less prepared for the next 9/11 in the ways that matter most. Of course, the next 9/11 will look different, but the reaction probably won’t.