Jonah Goldberg: Nostalgia is the ace up Joe Biden’s sleeve
Share this 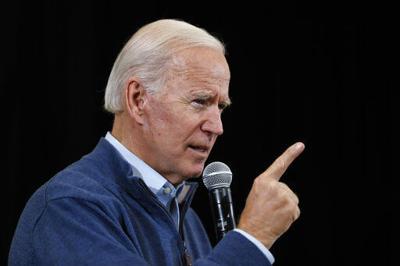 I like the word malarkey, consarn it. It’s the bee’s knees. Sure, the youngsters might say, “OK, Boomer” on hearing Joe Biden utter the word, but if you think he’s all wet for using it, you can take your phonus bolonus and tell it to Sweeney.

Biden has never really been my cup of tea. A bit of flimflam has always seemed to be behind that gigglemug of his. And for a guy who uses the word malarkey more than any politician since the 19th century — and has now emblazoned the slogan “no malarkey” on his campaign bus — he’s peddled a lot of it over the years. But he remains popular among a lot of Democrats for the same reason people like the word malarkey: nostalgia, which can be a powerful force in an election.

While I’m prone to nostalgia myself, I’m fairly immune to Biden nostalgia. So are the hep cats of Twitter and Instagram, who have an outsized role in the Democratic primary process. Most of the Twitterati weren’t even twinkles in their father’s eye when Biden first ran for the Senate, and it’s no surprise they don’t get his appeal.

But if Donald Trump taught us anything, it should be that the opinions of smarty pants don’t amount to a hill of beans compared with the opinions of voters. Trump’s “Make America Great Again” campaign was soaked with balderdash. He promised to balance the budget, cut taxes, spend wildly and save money in the process. He promised to fix the economy by putting China in its place and bringing back manufacturing. For nostalgic Republican voters, though, Trump’s vision evoked just the sort of mythical past they aspired to inhabit one day. And it was a plus that Trump caused the self-righteous press to huff and puff their outrage as they declared him incapable of victory.

Biden benefits from a similar dynamic. The handicappers keep fitting him for a pine overcoat, but the voters haven’t gotten the memo.

As Bloomberg columnist Ramesh Ponnuru writes, “The only thing Joe Biden has had going for him in this race is Democratic primary voters.” Biden has flubbed debates and failed to convince wealthy members of his party to open their wallets. But despite a barrage of negative press, he remains popular with a lot of voters, particularly older ones.

Nostalgia is Biden’s trump card. For some voters, it’s not nostalgia for the good old days of the 1950s or the 1920s but for the Obama years — which is why Biden mentions Obama like a verbal punctuation mark. But the former vice president also appeals to a deeper nostalgia.

For moderate voters who think things have gone haywire under Trump, Biden represents a kind of return to normalcy, to a time when partisan politics weren’t quite as lethal. He may be as prone to malapropisms and misstatements as Trump, but his folksy fumbling is a known quantity, a relic from a more predictable time.

Don't skimp on protecting the 2020 elections

Biden is also reassuring to Democratic voters who still think they’re good liberals in the tradition of FDR, LBJ and Clinton, and who honestly think their party is veering off the rails. They’re the voters who aren’t interested in who’s tweeting what or what’s trending in search engines, and there are a lot of them. A recent pre-obituary of the Kamala Harris campaign in The New York Times noted that many of the younger members of her team thought Twitter was the best place to figure out what voters really care about.

This doesn’t mean everything is copacetic for Biden. But he’s doing better than the wiseacres seem to think. He’s up 11 points over the field nationally, nine in Nevada and 19 in South Carolina. In New Hampshire and Iowa he’s slipped considerably and is now running in fourth place. But it’s still easy to imagine he could win in those states or pull off a close second. Bill Clinton came in second in New Hampshire in 1992 and, thanks to his gift for tooting his own horn, was dubbed “The Comeback Kid.”

If Hoosier moppet Pete Buttigieg wins in Iowa and Sen. Elizabeth Warren wins in New Hampshire as a “favorite daughter” from neighboring Massachusetts, that wouldn’t be ideal for Biden. But if he were to come in second in both places, which doesn’t seem unlikely, he could still be rolling in clover, and that’s no malarkey.

On this week's political podcast, Milfred and Hands analyze the latest high-profile exchange between Wisconsin's senior U.S. senator and Chuck Todd, host of NBC's "Meet the Press." It leads to a gotcha moment, in which Todd confronts Johnson about his partisan motivations.

Goldberg is editor-in-chief of The Dispatch and the host of The Remnant podcast: goldbergcolumn@gmail.com and @JonahDispatch.

Esther Cepeda: It's going to take a lot more than Mr. and Mrs. Nice Guy to beat Trump