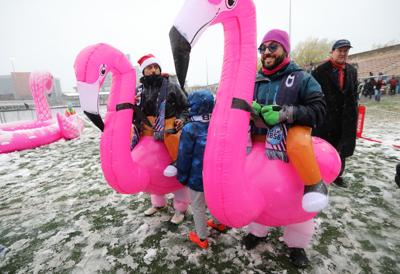 The first time I saw the dome of Wisconsin’s Capitol, I was informed that — way at the tippy-top — there was a lady with a badger on her head.

It wasn’t a joke. The gilded bronze statue is named “Wisconsin,” symbolizing the state motto “Forward.” She’s 15 feet, 5 inches tall, weighs over 3 tons and holds a globe with an eagle perched on it in her left hand and a badger, the state animal, on top of her helmet.

Just like the rest of Madison, which is a city I knew only because an internet acquaintance turned me on to Forward Madison FC, the town’s third-division pro soccer league. With its gorgeous uniforms and quirky social media presence, I got sucked into a fan vortex so strong that soon I was making long weekly trips from the northwestern suburbs of Chicago to Madison, home of the Flamingos.

The promise of a new life in a different place, with new people to love, made this Chicago girl flee suburban Illinois to peek behind Wisconsin’s so-called Cheddar Curtain.

It’s not that I needed to find out how good cheese curds taste (far better than their cringey name implies) but because my new home was either going to be Chicago, Los Angeles or Madison — and Madison won. Hands-down, no contest.

My youngest graduated from high school last year and, at that time, I leaned in to Chicago. I started trekking in from the ‘burbs (where I’d fled 18 years prior so that I’d have a snowball’s chance at a home with a backyard and a decent school system for my babies). I loved to go to the concerts, comedy shows, podcast tapings, fan cub meetups, magic classes and other cultural events that make the Windy City so special.

But I found street congestion that was 20 years’ worth of worse than it had been when I left for the suburbs in 1999. And neighborhoods that had once been solidly working class (read: affordable) were completely gentrified and unlivable, unless you had tons of money to plow into rent or a sky-high mortgage.

The media business in Chicago was on its knees, as it continues to be, and teaching gigs at Chicago Public Schools promised to be heartbreakers.

In short, Chicago didn’t have much to offer someone living a modest life and looking at retirement as the next major passage. Meanwhile, the state of Illinois, just like its biggest city, was losing people like me at an astonishing rate.

Most people who left were in the ultra-desirable age bracket of 20-34, but the greatest increase of people leaving were those 65 and older (almost 50% more between 2014 to 2018), trailed closely by 50- to 64-year-olds. And these people were more often middle- and high-income than low-income.

Reasons cited were job- and housing-related. The state’s financial situation surely also had a role to play. Truthinaccounting.org recently gave the state an “F” grade after an analysis of the latest available audited financial reports found that every state taxpayer would have to kick in $52,000 to bail Illinois out of a debt burden of $226 billion, mostly due to underfunded pension obligations.

“This report shows that Illinois went into the coronavirus pandemic with bad fiscal health, and it will probably come out of the crisis even worse,” truthinaccounting.org’s analysis said.

The state is well-known for being corrupt — six Illinois governors have been charged with crimes, four were convicted, and Rod Blagojevich was the first to be impeached and removed from office, yet he recently got a pass from President Donald Trump. And the city of Chicago has its own reputation for corruption.

But it was Chicago’s celebrated neighborhoods that made me sad every time I went into town.

The march of progress has made old tracts unaffordable and terribly bland, with the same chain pharmacies, coffee shops and fast food places replacing all the spots that had given the city so much character. Oh well.

My move to Madison isn’t the only journey I’m on right now. After 10 years of working as a syndicated columnist, I’ve decided to strike out to new pastures, and am so grateful to all of my readers for your constant interest and support. I’ll miss you, but you won’t have to look too far to find me online. And: Madison isn’t called Mad City for nothing. Come visit me some time. There are plenty of dive bars and gritty restaurants — and a golden lady with a badger on her head will be here to greet you.

Cepeda, who lives in Madison, has worked as a teacher and writes for the Washington Post: estherjcepeda@washpost.com and @estherjcepeda.