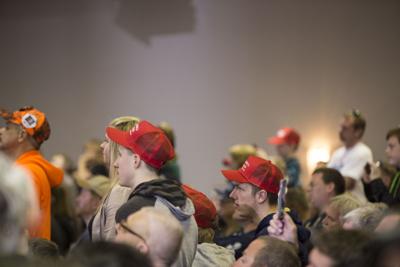 Republicans, unlike Democrats, are good at branding.

Translation: America was “Great” when women, people of color and poor people stayed in their place, didn’t complain too much and didn’t “demand” livable wages, access to equal opportunity employment and affordable housing.

It’s an easy message. And when worn on a hat or t-shirt, “Make American Great Again” employs the power color red and instantly evokes the political leanings of the wearer. Related imagery when you think of Republicans: American flags, bald eagles and military jets. Baseball, mom and apple pie.

These simple totems of patriotism become easy ammunition with which to skewer others, setting up a showdown pitting one part of the country (a “them”) against another (an “us”).

It’s easier to talk in simple sound bytes that way — “death panels,” “immigrant invaders,” “fake news,” etc. — reinforcing the Republican suspicion that America would be great again if only certain types of people would simply shut up.

As new bugbears go, the three-word “critical race theory” has a nice ring to it for the right. It has a patina of danger to it. What kinds of theories come out of being critical of race in our society?

The kind that might make parents have to explain to their young children why the beautiful myth of America as the land of freedom, opportunity and equality falls apart pretty quickly unless you’re white and have some social capital to spend on attempting to live the dream.

Listen, I get it. No one wants to have a super thorny conversation with their kids about why a lot of the wealth of our nation came from exploiting the people who lived in North America before the “pilgrims” showed up and by enslaving people who never intended to be relocated here.

How we get from that original sin to today — a time when some would rather pretend that there are no lingering aftereffects from a nation exploiting people based on the color of their skin — is a dialogue very few want to get into.

It’s all just a lot at about 6:30 p.m. when everyone is getting home and is starting to clamor for dinner, help with homework or a ride somewhere else.

The legal scholars who gave critical race theory life describe “a collection of activists and scholars interested in studying and transforming the relationship among race, racism, and power.”

Of course two Wisconsin Republicans — Assembly Speaker Robin Vos, R-Rochester, and gubernatorial candidate and former Lt. Gov. Rebecca Kleefisch, who graduated from UW-Madison in 1997 — are all upset that a mandatory training video simply mentions critical race theory. The university provides the video as part of its efforts to prevent campus sexual violence.

I’m not going to stick my neck out for any massive institution’s cobbled-together training video on the thorny topic of sexual safety for students and staff — it might be awful.

But, seriously: Boo-hoo if it upsets white people to face a fact or two about how their neighbors are kept from pursuing life, liberty and happiness because of the color of their skin.

White people, it shouldn’t be a big deal to admit your life is better in this country simply because you have the power that comes with visibly belonging to the dominant group of the nation.

The crux of this matter is that a whole lot of people of color on the left want to convince white people that life did not become more just and equitable for non-whites after the signing of the Voting Rights Act of 1965 and the Fair Housing Act of 1968 (even though that legislation clearly advanced the cause of equality).

It is understandable that, generally, people don’t want to talk about any of this — not with each other, not at all. Even white allies blanche at engaging in such conversations. It’s awkward to attempt to reckon with things that happened hundreds of years ago and don’t feel like they have any real impact on your life today. It’s all a real downer.

Esther J. Cepeda: You can't 'tell' who is hungry and who isn't

In my world, the dismantling of landmark legislation that keeps the least educated and resourced out of the voting booth is underway in many states with large concentrations of people of color.

But what is an encroaching threat to my own ability to vote (remember those pictures of people of color standing in long lines for hours to cast ballots during the worst of the COVID outbreak?) is merely a bummer if you’re white.

People of color understand that the power and resource imbalance between whites and themselves in the United States is a sensitive subject for everyone. Still, though, we want it to be acknowledged.

People of all races and ethnicities feel and experience racism. Why can’t we learn to talk about it using a shared vocabulary?

Here’s the answer: The Blue Team of Democrats, always trying to stuff a diverse constituency into a big, messy tent, always gets beaten by the Red Team of Republicans.

It’s because the Red Team is simply better at using quick, simple language to push big, simple ideas about what they stand for and against. And they have the advantage of delivering their message to a mostly homogenous group of people who are interested in holding onto their station in life.

Team Blue needs a unifying vision, snappier language and the will to lean into messaging that can find the through-line between “us” and “them.” The theme is there, but it needs to be made explicit through way, way better branding.