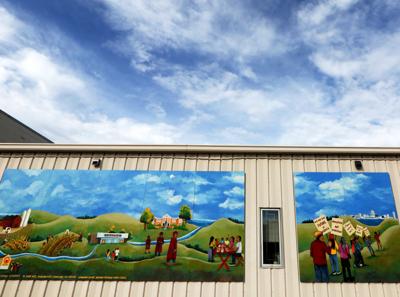 For so long I complained about what a joke “Hispanic Heritage Month“ usually is. But after four years of being half-worried that Donald Trump would cancel it, it’s sort of a relief to see it roll back around.

Hispanic Heritage Month started out as Hispanic Heritage Week by Lyndon B. Johnson in 1968. Johnson, who taught Mexican farm laborers’ children on the border long before ascending to the presidency, would be disappointed to learn that, though Hispanic/Latino/Latinx children make up 27% of all public school students, most public schools do an absolutely terrible job of celebrating that heritage.

I’ve been in schools that made no mention of Hispanic Heritage Month, and others where it was a mere morning announcement. It’s a “month” that just hasn’t trickled down into schools and classrooms the way Black History Month has.

While it still represents a small sample size, I’ve been in all kinds of schools in the Midwest for the past two decades. My observation is that instead of using the month to normalize the idea that, as this year’s presidential proclamation reads, “Hispanic heritage is American heritage,” it is just as ignored as Hispanics’ long history of making this country great to begin with.

Hispanic Heritage Month was expanded from a week to cover a month’s worth of time by President Ronald Reagan in 1988. You can imagine it was a sort of “thank you,” since Latinos were pivotal in ensuring Reagan won reelection. To this day, Republicans and other conservatives love to quote Reagan saying, “Hispanics are already Republican, they just don’t know it yet.“

But the one thing I do love is that, because Hispanic Heritage Month is a federally recognized observance, there is lots of great data to dive into.

That’s a change! Look around, and you’ll see us. We’re here and we’re not the “minority group” we used to be, nor are we the terrifying demographic tsunami that the 2000 Census predicted.

Hispanics are not even a “we” any more than white people are all of a “community” that shares cultural similarities. “We,” like any other demographic group, have more in common with people from our own socio-economic status, seeking out others who are similarly either highly educated or who clock into a shift to work with their hands.

I would enjoy hitting you over the head with statistical data for hours on end, but a perfect composite of Latinos will never emerge are because we are all different.

Sure, we’re mostly U.S.-born, mostly at least partially from Mexico (but with other Latin American countries increasing their numbers). But we don’t all speak Spanish. We don’t all go to church on Sundays.

Esther J. Cepeda: Where are the people who look like me?

Hispanic Heritage Month runs from mid-September to mid-October because several Latin American countries celebrate their independence within that time period, so it’s kind of a hard timeframe for most people to keep up with. But if you could, for the next few weeks, engage with Hispanic Heritage Month in any way whatsoever, I promise you won’t be bored.

You could read a book written by a Latino author, watch a Netflix documentary about anything Latinx (Netflix, just as many other entertainment outlets, have curated lists of TV shows and movies) or go to a cultural event in your community — lots of colorful national dance demonstrations are on display at this time of the year.

Better yet, ask your Latina waitress her name, look a lawn care professional in the eye and say “Howdy,” or thank someone who is providing you a service you wouldn’t have done for yourself during the COVID shutdowns — essential workers were likelier to be Hispanic and black, remember.

Just whatever you do, don’t ignore Hispanic Heritage Month. It’s not a perfect spotlight on the creativity and energy Latinos bring to this country’s evolution. But it is, I’m now prepared to say, much better than no recognition at all.

See her latest columns below:

Esther J. Cepeda: We all have our blindspots when it comes to race

Few issues are more contentious than what children learn in school.

This new exhibit will get you floating above NYC

This new exhibit will get you floating above NYC