Become a Member
Read Today's E-edition
Share This
Dan Frei: No easy answers for Madison cop on this gun call
0 Comments
Share this 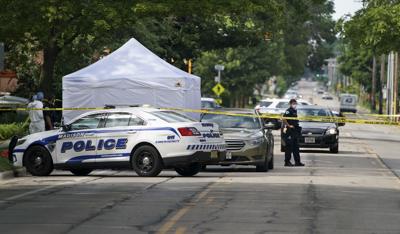 I was parked last Sunday in the driveway of the Culver’s restaurant on Northport Drive in Madison. Just being visible helps to slow drivers.

Suddenly, alert tones sounded in my police car, signifying a call involving weapons. The call was in the parking lot of an apartment complex about 150 yards away. I was on the scene maybe 30 seconds after the call was dispatched. The only information was that I was responding to “a gang of people with guns.”

What happened next helps illustrate the state of policing today.

I parked and started to walk toward three vehicles in the center of the lot and maybe 15 or more people moving around. As I walked toward the group, a female started screaming at me to “do something.” But she would not help me understand what was happening or who might be armed. She only yelled that someone pointed a gun at her adult son.

I was the only officer there, having been so close when the call came in, and because few officers actually patrol each of the city’s geographical area, despite what the politicians say.

So I don’t know who might have guns. I have someone yelling at me, others getting into cars, and others moving around. No one is actively shooting, as far as I can tell. I can’t see anyone shot. Prior to my shift starting, I know three or four separate incidents that day involved shots fired, and we are now getting daily calls where people are shooting at each other.

The female and her adult son are basically accusing me of being a coward because I am not “stopping” those who had the guns, though no one is calm enough to tell me who they are. One male starts telling me fairly calmly that the male with the gun is driving away in a car, and I report the description of that car. Even he is saying I need to “go get them,” though I’m still the only officer there and can’t honestly tell what is going on other than someone reportedly had a gun and possibly pointed it at someone.

Our current policy states that we cannot pursue a vehicle unless we have information strongly suggesting the people in it pose a “continuing threat” of violence beyond what might have occurred already. Without information as to what happened, we have to let the vehicle go if it refuses to stop.

I’m borderline in violation of Madison Police Department policy for even having walked up alone without backup. Our policy might allow me to, if I provide justification for why I felt it was necessary to approach without backup (such as the possibility of someone having been shot or someone about to be shot if I don’t act). This policy is in place not only for officer safety, but also due to concerns from the community that a lone officer might use more force than if multiple officers were present.

Those concerns have some validity, but don’t fully appreciate the fluid situations we encounter. And those on the scene are yelling at me to do something.

No officer wants to stay in the car or just watch from a distance. What if someone is hurt or being hurt? And what if the “bad guys” get away. This is very serious and dangerous behavior. It leads people to feel victimized and potentially scared for their lives. It leads to retaliation and a view that, “If the police won’t deal with it, we will.”

It’s behavior that can’t be tolerated, and too often this is ignored in the media. People correctly expect police to try to catch those accused of doing harm. If legislators don’t want me to arrest them, they should tell me when I should just let people go.

So what do I do? One option from training and experience, when confronting a group of people with a possible weapon, would be to confront everyone at gunpoint and direct them to the ground until more officers could arrive. We could safely determine who was armed and what was going on.

Some would be right. They were just with the suspect or suspects. Some would be the actual “bad guys,” but shockingly the “bad guys” almost never take responsibility for what they just did.

The second option is to observe — unless someone is actively being seriously harmed or presents a threat that is too dangerous to just observe, such as pointing a gun.

Either way, potential danger is posed to all. One officer (or even a few) can’t adequately control more than a small number of people unless they allow us to pull our guns. And if others in the crowd are armed or try to interfere with officers or start being violent, things can quickly escalate.

So in the end, no one was happy. I do the best with what I can. I hope no one gets hurt. I hope I don’t get hurt, and that I don’t have to hurt anyone.

By the way, we are seeking more officers like we currently have — highly educated, quality individuals with exceptional character who want to help people.

Frei is on the board of the Madison Professional Police Officers Association.

Roger Stone is an infamously execrable force in American politics. Perhaps his only saving grace is that he’s not a hypocrite about it.