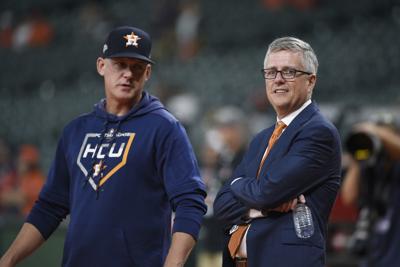 Most of us know that hollow feeling that comes when we realize our sports heroes aren’t so heroic — when our favorite slugger is caught doping; when a Texas sports icon has to surrender his Tour de France titles; when a hustling, hard-working switch hitter admits to gambling on his own team; when one of the world’s greatest golfers turns out to also be one of the world’s most smutty sexters; when a brash, young rebounder declares, against all evidence from his jersey sales, that he is not a role model.

And yet, we also know the power of sports to inspire virtues like a strong work ethic, the pride of accomplishment, loyalty to teammates, a growth mindset and a commitment to fair play. It’s for these virtues that athletics maintains an outsize impact on our culture, and fashion so many of the heroes our children look up to. So it’s in defense of these values that the Houston Astros have a responsibility to respond to the latest scandal by doing the right thing.

On Monday, they made a start. Astros owner Jim Crane fired team manager A.J. Hinch and General Manager Jeff Luhnow for allowing their team to steal signs from opponents. The cheating happened by way of an outfield camera and a secret monitor installed in the Astros’ home dugout during the 2017 and 2018 seasons. Pitch signs would be relayed from the dugout to the player at bat by banging on a trash can. When Major League Baseball Commissioner Rob Manfred announced the discipline Monday, he also suggested even more severe punishment might be coming for former Boston Red Sox manager Alex Cora. The Red Sox announced Tuesday that they had “mutually agreed to part ways” with Cora.

The Astros won the World Series in 2017 with Cora as bench coach. The Red Sox won the World Series in 2018 in Cora’s first year as manager. An investigation into the Boston team is ongoing. As yet, Manfred said, there is no evidence that signs were stolen during the 2018 playoffs. Besides losing their manager and GM, the Astros were fined $5 million and made to forfeit two draft picks.

It would be overstating to assert that Houston and Boston won World Series titles because of this scheme. Sign-stealing is an advantage but not an all-powerful one. And sign-stealing is not, itself, illegal. If a runner on second base can decipher a catcher’s signals, he isn’t breaking any rules. What made the Astros’ scheme cheating was its asymmetric nature. The dugout video monitor gave the home team an advantage its visitors didn’t have. And this must be said, too: Hinch and Luhnow didn’t appear to have any hand in creating the scheme. Their mistake was in letting it continue once they learned of it. ...

To add to the drama, remember that this is the same Astros organization that first denied reports of profane remarks from assistant GM Brandon Taubman directed at female reporters during last year’s American League Championship Series, and then backtracked and fired him. Taubman is suspended for the 2020 season.

All of this brings us to the lessons we might salvage from what The Associated Press has called “U.S. sports’ largest scandal since the New England Patriots’ ‘Spygate.’”

First, fairness matters. It isn’t naive or childish to insist on fair play; it’s honorable. ... “This is the big leagues” should not be code for “It’s OK to cheat here because there is lots of money at stake.” We aren’t in favor of a lifetime ban for Hinch, Luhnow, Cora or Taubman. But we won’t be endorsing any of them to fill slots on the Rangers’ staff anytime soon. And we think other teams should also keep their distance.

And second, gestures matter. There is room for growth, for correction, for second chances. In fact, those are the very lessons sports teaches us. But to learn from loss, we have to admit loss.

The Astros should come clean about the extent that sign-stealing contributed to their World Series win, which, it’s worth noting, took seven games to achieve. And if MLB decides to strip them of their title or qualify it with one of those all-too-familiar asterisks, Houston should make a symbolic gesture to show it has learned from its mistakes. Giving Dodger Stadium a World Series banner would do the trick.

Wherever the Astros go from here, it shouldn’t be into hiding, arguing or shifting blame. The virtues of athletic competition are worth defending, and we’ve had quite enough of fallen sports heroes.

Baseball has been the background music of my life. Now, thanks to the Houston Astros and their sign-stealing cheat, I’m humming a different tune.