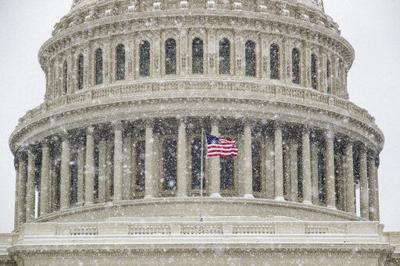 “Nuance doesn’t sell as well in America,” Noah said in an interview with CBS. “Nuance means you can’t just take a stand and fight the other person. Nuance means we have to talk a little bit more. And until the American political system can find a way to represent the nuance that exists within America, you are going to create this false impression that there is This or That.”

In a nation sharply divided by ideology, it is easier for many of us to embrace absolutes over nuances. Unfortunately, we do it at our national peril.

Political protest and debate are cherished and essential elements of a functioning democracy. A society that views nearly every issue as your team vs. my team is proving to be more and more difficult in an increasingly polarized nation.

And the list of polarizing issues is inexhaustible — masks and COVID-19; immigration policy; gun safety vs. gun owners’ rights; and the increasingly dangerous perception that stridence for racial justice is the same as advocating racial violence or special preferences.

These aren’t one and the same, and rhetoric that conflates issues distracts from dealing with the core of the problem, which in the case of protests are the issues that drove demonstrators to the streets.

Neither is right. Most people, including the majority of peaceful protesters, are against destroying property and resorting to violence. And, all of us should favor recognizing and respecting the civil rights of all people and the rights of people to peacefully protest for those rights.

Another example of this binary division can be found in a new Dallas Morning News/University of Texas at Tyler survey conducted in late August and early September. Just 15% of Democrats support deploying the military in response to protests, compared with 70% of Republicans. On the use of tear gas and rubber bullets against confrontational protesters, 26% of Democrats asked in the survey supported those tactics versus an overwhelming 82% of Republicans.

Common sense should tell us that there are few absolutes in life. To pretend so edges out what this nation needs the most at this time — critical reasoning and interpretation that leaves room to decipher complicated realities and reach solutions. However, when difficult situations are reduced to my right position and your wrong position, conflict and gridlock are inevitable since there is no leeway for a third way.

Failing to address the nuances of complex ideas enables reflexive groupthink. Instead of justice and progress, gridlock, frustration and incivility become the order of the day and reforming the system to better protect basic civil rights for all gets swept away in the chaos.

The death of Justice Ginsburg has changed everything about the 2020 election.

The rush to judgement, Feingold said, should be resisted by senators because of the threat it poses not merely with regard to this one seat, but to the future of the judicial selection process.

John Nichols: GOP positions on the wrong side of history

Wisconsin Republicans take a cue from Donald Trump in defending the Confederate flag.

Masood Akhtar: Why do Blacks pay the highest price?

Hats off to the board for recognizing a need to do all it can to include everyone in the treasures that are Dane County's public parks.

Realizing this fall’s event needed to be virtual, we brainstormed timely questions to build our program around and landed on the local effects of the coronavirus pandemic, the Black Lives Matter protests, climate change and of course the election.

While it’s not likely that Donald Trump’s apologists will be similarly dispatched to a watery grave, they will ultimately be held culpable for his toxic actions.

Facts have nothing to do with what this president says.

Kaleem Caire: It's long past time for UW-Madison to hire a Black athletic director

I am done with accepting white folks' excuses about why the status quo that almost exclusively benefits them remains firmly intact.