Dairy Innovation Hub should stay in state budget
Share this 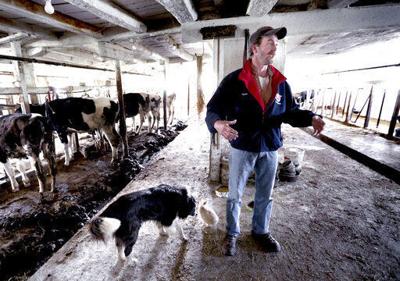 With farm exports and income down, Wisconsin has more reason than ever to invest in the future of its dairy industry, including an innovation hub across three state campuses.

The $81 billion state budget the Republican-run Legislature is approving this week includes $8.8 million for research on dairy farming at UW-Madison, UW-Platteville and UW-River Falls. Democratic Gov. Tony Evers is expected to — and should — issue partial vetoes to improve the Republican-proposed budget. But he should leave the Dairy Innovation Hub intact.

The University of Wisconsin System isn’t getting the investment it needs. Republican lawmakers have increased university spending in their proposed budget by $66.5 million — about half as much as the $127 million Democratic Gov. Tony Evers had proposed. UW System President Ray Cross described the Legislature’s lower-than-expected investment as a “kick in the shin,” though he’s happier about building projects that lawmakers approved.

The Republican-shaped budget should have included more state money to offset a popular tuition freeze that’s held down the cost of higher education for Wisconsin families since 2013. During that time — and under Republican rule — Wisconsin’s per-pupil spending on higher education lagged behind all other states except Oklahoma, West Virginia and Mississippi.

But the Dairy Hub, a bright spot in the Republican budget, deserves attention and approval. The idea, which came out of a state summit two years ago, is to address industry challenges and stay ahead of global competition. Rep. Travis Tranel, R-Cuba City, and Sen. Howard Marklein, R-Spring Green, are key supporters.

Critics including many of his fellow Democrats claimed Tony Evers was too boring to be elected Wisconsin's governor. They were wrong. And at the recent Wisconsin Democratic Convention, he got his revenge: "Who's boring now?" he crowed, touting his veto pen as a powerful check on the Republican-run Legislature. On this week's "Center Stage" political podcast, Milfred and Hands play clips and comment on his recent convention speech, which reminds Milfred of the ending to "Revenge of the Nerds."

“The hub intends to attract the world’s best research talent to our state and provide the tools for making important new discoveries,” a coalition of farmers, cheesemakers and others wrote in a letter of support to lawmakers this week. “It will train industry leaders who will help transfer that new knowledge to farms, processing plants, watershed groups and beyond.”

More than dairy farmers would benefit from the research hub. It would seek new ways to improve the impact of farming on the environment, protect the health and welfare of cows, and enhance health and nutritional benefits for people.

Dairy farmers need profits, not handouts from the federal government. The research hub represents a smart investment in the future of farming that deserves bipartisan support at the statehouse.

On this week's "Center Stage" political podcast, Milfred and Hands "ooh" and "aah" at the fireworks erupting during final debate over the state budget, with Gov. Tony Evers signing -- and partially vetoing -- the state's two-year spending document this week. Assembly Speaker Robin Vos, R-Rochester, and state Sen. Tim Carpenter, D-Milwaukee, trade insults and joust over state policy and spending, with Milfred and Hands providing smart commentary from the sensible center of Wisconsin politics.

With Wisconsin exports down 40%, Congress should OK agreement

WASHINGTON — During a single visit to Asia, President Trump embraced not one, not two, but three dictators. He became the first American presi…

St. Louis Post-Dispatch: Trump’s trade war is devastating farmers. They should remember that in 2020