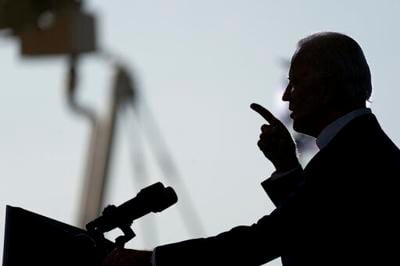 Perhaps it would come as no surprise that the person who likely coined the term “court-packing” vehemently opposed Franklin Roosevelt’s plan to expand the size of the U.S. Supreme Court. The term makes any such expansion sound odious, malign, corrupt. That’s probably what Edward Rumely — physician, newspaperman and rabid opponent of New Deal policies — intended.

No corruption is inherent in expanding the size of the nation’s highest court. The U.S. Constitution does not say how many justices should sit on the court, and its size varied in the nation’s early history. Expanding the court would require Congress to change the standard it set in place in 1869 — upending a long-standing tradition — but let’s remember that the 19th Amendment, which gave women the right to vote, eviscerated a far older tradition. Some traditions are best honored in their breach.

Nothing would be antidemocratic about the appointment of, say, 11 justices. But the term “court-packing” implies a trampling of democratic norms, an unconstitutional seizure of power. It suggests that Democrats are considering a coup.

That’s why Joe Biden and his allies should studiously avoid the term. Biden could learn little from the disgraced House Speaker Newt Gingrich, but one lesson is key: Don’t let the opposition define the terms of the debate.

For weeks, Biden and his running mate, California Sen. Kamala Harris, have badly bungled questions about whether they would support a plan to expand the number of justices on the nation’s highest court, a proposal gaining support among progressives as Senate Majority Leader Mitch McConnell, R-Ky., and his allies engage in their own version of court-packing. Biden and Harris have steadfastly refused to answer the question from reporters, which guaranteed that reporters would continue to ask.

More recently, Biden reiterated his reservations about expansion: “I’m no fan of court-packing,” he said. That’s a better response than silence — and a reminder of the position he took in the primaries: “I think it’s a bad idea. I think it will come back to bite us (Democrats),” he said in 2019.

The former vice president still believes in the hallowed traditions of comity and bipartisanship that marked American politics when he entered nearly a half-century ago, so his remarks were no surprise. Unfortunately, though, he used the term favored by his opponents: “court-packing.” Don’t do it, Joe. Don’t give them that.

Committed megalomaniac though he is, Gingrich doesn’t always get the credit he deserves for shredding the fabric of democracy, for polarizing our politics, for blowing up the bridges of bipartisanship. As a little-known backbencher from Georgia, he taught his fellow Republican members of Congress to describe their Democratic colleagues in the most disparaging terms: pro-communist, un-American, tyrannical. A Republican plan to give the rich another unfair advantage by abolishing the estate tax, which applies only to those wealthy enough to leave their heirs more than $5.5 million, gained popularity when Gingrich taught his caucus to label it a “death tax.”

Words matter. Labels sway beliefs. Branding an idea with negative-sounding descriptors primes voters to view that idea with suspicion. The Affordable Care Act was unpopular for years because Republicans successfully branded it as radical legislation, “rammed down the throats” of legislators and stuffed with awful provisions such as “death panels.” Only after Americans actually had years of experience with the ACA did it become popular.

Biden is right, however, to be cautious about expanding the size of the court. Progressives note that conservatives have spent decades and billions of dollars to build an ultraconservative majority on the bench with the assistance of McConnell and his allies. Nevertheless, the nation’s highest court has maintained a scintilla of respectability. If Democrats embark on a mission to expand its size, you can be sure that conservatives will spend billions more to find an advantage — turning the Supreme Court into an even more unstable font of partisanship.

Besides, Roosevelt won by losing. His threat of adding seats to the court got the attention of sitting justices, who found a way to enshrine his New Deal policies as perfectly constitutional. Perhaps the court of Chief Justice John Roberts will do likewise.

If it doesn’t — if it abolishes reproductive rights and destroys Obamacare and eviscerates voting rights — the nation will find itself in turmoil. And voters will demand a changed court.

Plain Talk: Wild West's vigilantism is back in vogue

I fret for the future of our country when we rationalize violence and mayhem — no matter which side it's coming from.

If they want to end it — which would be both reckless and unpopular — they should at least have the guts to take a vote and face the consequences with voters. Cheerleading while others fight the mandate in court is wasting crucial time when people are dying from COVID-19.

Wisconsin's own tax system is also loaded up with a collection of special-interest tax breaks that benefit the wealthy and big corporations in the state.

“The clerk’s office shouldn’t be partisan. It’s ridiculous to do it this way," said Alicia Leinberger, independent candidate for Vernon County Clerk. "Why should we have a Democratic or a Republican county clerk?”

Carrie Scherpelz: My mother was a member of the Hitler Youth. I fear the staying power of propaganda

Hitler was a master of both provocative and patriotic propaganda, and so is Donald Trump.