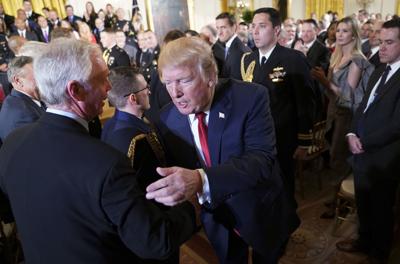 What am I to believe about the conservative political ethos and its much-ballyhooed respect for men and women in military uniform? What am I to believe now that defenders of President Donald Trump have decided to smear Lt. Col. Alexander Vindman — who was decorated for his service in Iraq — because his testimony in impeachment proceedings is damaging to the president?

Trump led the charge, tweeting that Vindman, who currently serves as director of European affairs for the National Security Council, is a “Never Trumper,” though there is no evidence of that. Fox News commentators busied themselves suggesting that Vindman is a “spy” guilty of “espionage.”

OUR VIEW: President is raiding funds for fighter wing in Madison, breaking promise that Mexico would pay

In fact, Vindman represents the quintessential story of an immigrant who has worked hard and made sacrifices to repay the country he loves. Vindman and his twin were just 3 years old when they fled Soviet Ukraine with their father and older brother. (All three boys later joined the U.S. Army.) That used to be the sort of story that American conservatives made speeches about, wove into their Independence Day festivities and insisted that Hollywood portray on the big screen.

Not anymore, it seems. Patriots, according to the current crop of conservatives, are those who obsequiously defend Trump.

Conservatives have fire-bombed their cathedral of long-held values and traditions, discarding the principles and erasing the platitudes that defined them for generations. Once upon a time — well, just a few short years ago — they viewed autocrats such as Vladimir Putin as dangerous rivals, threats to democratic movements throughout the world. But ever since Trump became engaged in a bromance with Putin, Russia’s intervention in U.S. elections hardly raises an eyebrow in conservative circles.

During the presidency of Barack Obama, Republicans were deeply worried, or so they said, about the budget deficit. Deficit hawks so hectored Obama that he settled for an economic stimulus package that didn’t do nearly enough to fight the lingering effects of the Great Recession. But the budget deficit is now nearly a trillion dollars, despite a relatively good economy, and the conservative deficit doomsayers have disappeared.

Then there is the constitutional intervention of impeachment, which Republicans took to with enthusiasm to try to oust Bill Clinton from office. Independent counsel Kenneth Starr unleashed a 453-page document filled with prurient details about Clinton’s sexual peccadilloes, insisting that the president’s adulterous affair and his prevarications on the subject merited impeachment.

But Starr has recently reversed himself. “Impeachment has become a terrible, terrible thorn in the side of the American democracy. ... Let’s at least have a reasoned and deliberate conversation about some lesser kind of response,” Starr said in an interview with conservative writer Byron York.

And, of course, there is the highly vaunted conservative religiosity, a churchiness that, according to right-wingers, shows their superior morality. It is certainly true that there is a strong connection between voters who attend church services regularly and those who support Trump. But there is precious little connection between the principles espoused in their pulpits and the values that permeate the New Testament. Dallas preacher Robert Jeffress, pastor of one of the nation’s largest Southern Baptist congregations, has predicted “a Civil War-like fracture” if Trump is impeached. Prince of Peace, anyone?

In 2016, it was surprising to see fundamentalist Christian leaders overwhelmingly endorse Trump, the thrice-married, adulterous TV game-show host who had publicly bragged about sexually assaulting women. It was also surprising to see Trump take little flak from Republicans for belittling John McCain, a war hero and long-serving Republican senator. But at this point — after so much hypocrisy, so many reversals and so little integrity — it’s no surprise to see Republicans abandon the Constitution and trample democratic principles in an effort to defend Trump.

It is now obvious that the current conservative movement is nothing but a power-grab, a huddle of revanchists who will do anything to remain in power, to preserve their stature in a nation whose demographics are swiftly turning against them. Theirs is a frantic effort to maintain the status quo, and their desperation is showing.

In recent days, columnist Cynthia Tucker said the GOP is running out of values, and columnist Dave Zweifel has asked where GOP fiscal concerns…

I appreciate that the State Journal makes an effort to present all sides of controversial issues.