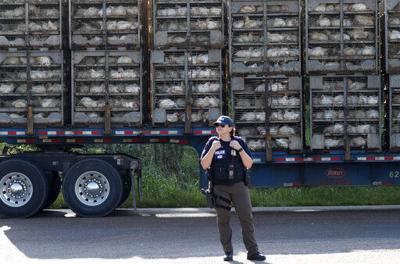 MOBILE, Ala. — Agents from Immigration and Customs Enforcement recently conducted massive raids on chicken processing plants in the state of Mississippi, detaining nearly 700 immigrant workers, many of whom entered the country illegally years ago. The raids, which spanned seven cities and targeted work sites owned by five different companies, were the largest single-state workplace enforcement action in the history of the agency, ICE bragged.

The ICE detentions left schoolchildren in tears, unsure where to go or what to do as their parents were hauled away. They devastated rural communities that had been revitalized by immigrants from Mexico, Guatemala and Honduras — immigrants who paid taxes, raised families, helped their neighbors. The raids terrorized legal immigrants already anxious after the mass shooting in El Paso, Texas.

But the raids were no more than an inconvenience for the managers and corporate officers of the poultry plants. Not a single corporate officer was arrested, not a single company owner targeted. Indeed, a few days after the raids, the plants were seeking to hire more workers to replace those scooped up and detained.

Don't skimp on protecting the 2020 elections

Federal authorities confirmed they have probable cause that all five companies knowingly hired illegal workers in violation of federal law.

Homeland Security Investigations agent Anthony Todd Williams Jr. said there is probable cause to believe the chicken plants in Mississippi intentionally hired, “for the purpose of commercial advantage or private financial gain,” undocumented workers who presented fraudulent documents, according to The Washington Post.

For decades, certain sectors of the economy — agriculture, construction and food processing among them — have relied on illegal labor. That’s because few U.S.-born workers are willing to take certain jobs at the prevailing wage. Chicken processing, for example, is hot, hand-crippling, soul-numbing work, but someone needs to do it if consumers are to enjoy their chicken nuggets. That’s why immigration authorities have frequently turned a blind eye to illegal labor.

Elsewhere in the criminal justice system, you may be charged with a felony simply for being in the company of someone who commits a serious crime. If, for example, you are riding in the car with a person transporting illegal narcotics in the trunk, you, too, may be charged — even if you had no idea the driver was carrying narcotics. But if you own or manage a company that hires workers without documents, you are very rarely subjected to prosecution.

If the United States were serious about curbing illegal immigration, the federal government would crack down on supervisors, corporate officers and company owners who hire illegal workers. Massive fines would act as a deterrent, but a jail sentence for a corporate bigwig would be even more effective.

After all, the immigrants who flee their strife-torn homelands seeking asylum in the United States must look for employment once they arrive here. Officials in the administration of President Donald Trump have discounted many asylum claims, insisting that migrants are merely seeking jobs, not safety. (That should serve as a reminder that the administration is merely posturing when it points the finger at immigrants who receive public assistance — a tiny minority.) If undocumented workers couldn’t get jobs, fewer would come.

If the United States were serious about curbing illegal immigration, states would require all employers — from giant companies to small lawn care services — to use the E-Verify system, an electronic database that immediately vets a worker’s legal status. But few states require it of all employers, and even fewer punish those found to be hiring illegally.

Take the president himself. According to published reports, the Trump Organization has relied on undocumented workers for years at its golf resorts. The Trump family fired those workers only after news media investigations made those hiring practices a matter of public record. Trump and his sons, of course, were not sanctioned.

Clearly, the Trump administration wants to punish only darker-skinned migrants and use them as a punching bag in the president’s re-election campaign. Among nativist conservatives, that’s always been the goal. As Swiss writer Max Frisch once noted, “We wanted workers, but we got people instead.” In the United States, we got brown people. Trump’s voters certainly don’t want that.