If a ruling allowing for the tally of late-arriving absentee ballots is upheld by the federal courts, the U.S. Postal Service is pledging that all ballot envelopes will include a postmark with a date so that local clerks can know for sure whether the ballots made it in by the deadline.

But if the USPS fails in that pledge, it will again be up to each clerk to decide whether to count ballots that arrive after Election Day without a postmark but within the court-determined six-day grace period.

With the coronavirus still raging, election officials are again seeing the kind of record numbers of absentee ballot requests they saw before the April 7 statewide election and presidential primary. And just as before that election, a federal court has decided that ballots that arrive at clerks’ offices within six days after Election Day can still be counted — as long as they are postmarked by Election Day, in this case, Nov. 3.

Absentee voting is expected to skyrocket in Wisconsin on Nov. 3. Here's how to do it

That is, assuming the extended deadline stands up in court. In a lawsuit filed by Democrats, a federal judge on Sept. 21 approved the six-day grace period and a federal appeals panel upheld it eight days later. On Wednesday, Republicans, who oppose the extension, asked that the full 7th U.S. Circuit Court of Appeals take up the case. If the full court upholds the extension or refuses to take the case, the Republican-controlled Legislature intends to appeal to the U.S. Supreme Court.

It wasn’t clear until the day before the April 7 election whether that election would even take place, with Democratic Gov. Tony Evers first postponing it until June because of the COVID-19 pandemic and then, hours later, the state Supreme Court ordering it to proceed. Such last-minute confusion was likely at least part of the reason behind the long lines at some polling places and the Postal Service’s inability to handle the glut of absentee ballots.

A post-election review by the Wisconsin Elections Commission turned up multiple problems with the Postal Service’s delivery of absentee ballots, including ballots lost or found abandoned in tubs, or repeatedly returned, unmarked, to one clerk’s office. Many ballot envelopes lacked postmarks or had ones that were illegible or didn’t include a date — making it nearly impossible for clerks to determine whether the ballots had been in the mail by Election Day, per the court’s order.

In a memo issued April 11 by the elections commission in response to some of the problems municipal clerks were seeing with mailed-in ballots, the commission referenced USPS guidelines that say “postmarks are not required for mailings bearing a permit, meter, or precanceled stamp for postage, nor to pieces with an indicia applied by various postage evidencing systems.”

Absentee ballot return envelopes are, by law, required to have pre-paid postage, meaning that under the USPS guidance, they don’t necessarily have to be postmarked with a date.

But USPS spokesman Robert Sheehan said the Postal Service’s policy now “is to postmark all ballots mailed by voters, whether they are pre-paid by election officials or mailed with a stamp affixed by the voter,” and all postmarks are to include a date.

Elections Commission spokesman Reid Magney said Wednesday that “postmarks are only necessary for ballots that arrive after Election Day” and that his agency “will be talking with USPS representatives about postmarks in the coming days and weeks as we develop guidance materials for clerks and voters.”

The commission doesn’t have data on how many absentee ballot envelopes were received without postmarks after the April 7 election, and it’s unclear whether clerks generally counted the ballots that came in those envelopes. State law and the commission do make clear, however, that whether to count them is under the purview of each local clerk.

In Madison in the six days after the April 7 election, the clerk’s office received 680 absentee ballots that arrived in envelopes without postmarks. All were included in vote totals after the Board of Canvassers reviewed each case. In general, the reasons for accepting them were that the ballots themselves had been dated by voters on or before Election Day and that they had been mailed from out of state or out of the country and thus took more time to arrive.

President Donald Trump won Wisconsin four years ago by less than 1% of the vote, and Republicans and supporters of Democrat Joe Biden are exploring every option for making sure their votes are counted this year. State and local election officials have repeatedly advised people voting absentee to get their ballots in as soon as possible.

Seeking to sow doubt about the integrity of the absentee voting process, President Donald Trump during a rough-and-tumble debate Tuesday claimed that ballots have been "dumped in rivers" and found in "creeks."

It's not entirely clear what he was talking about, but he might have been referring to a case in Outagamie County when on Sept. 21 the Sheriff's Office recovered three trays of mail, including "several" absentee ballots, from the side of the road and in a ditch along a highway in the town of Greenville.

According to a Sheriff's Office statement, the mail was in transit to the post office, and deputies turned it over to the U.S. Postal Inspection Service, which the fact-checking website Snopes said is conducting an investigation.

A local U.S. Postal Service spokesman and the Inspection Service were not able to provide more details on the case Thursday.

There is no evidence of widespread fraud or other major flaws in the absentee voting process.

President Donald Trump has canceled rallies planned for Saturday in two Wisconsin cities after the president tested positive for COVID-19. 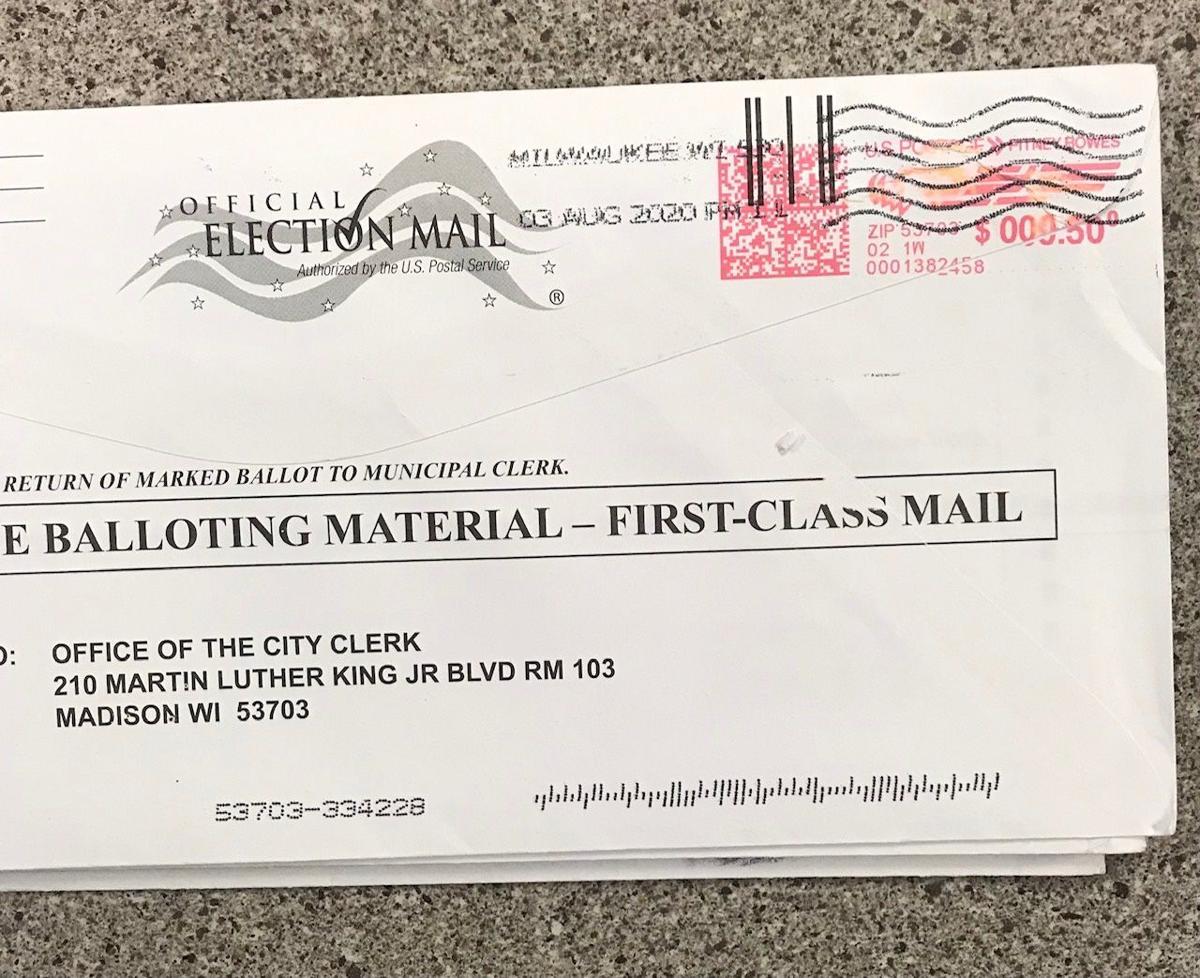 The U.S. Postal Service is promising absentee ballot return envelopes will have postmarks with dates, making it easier for municipal clerks to ensure they were in the mail by Election Day.