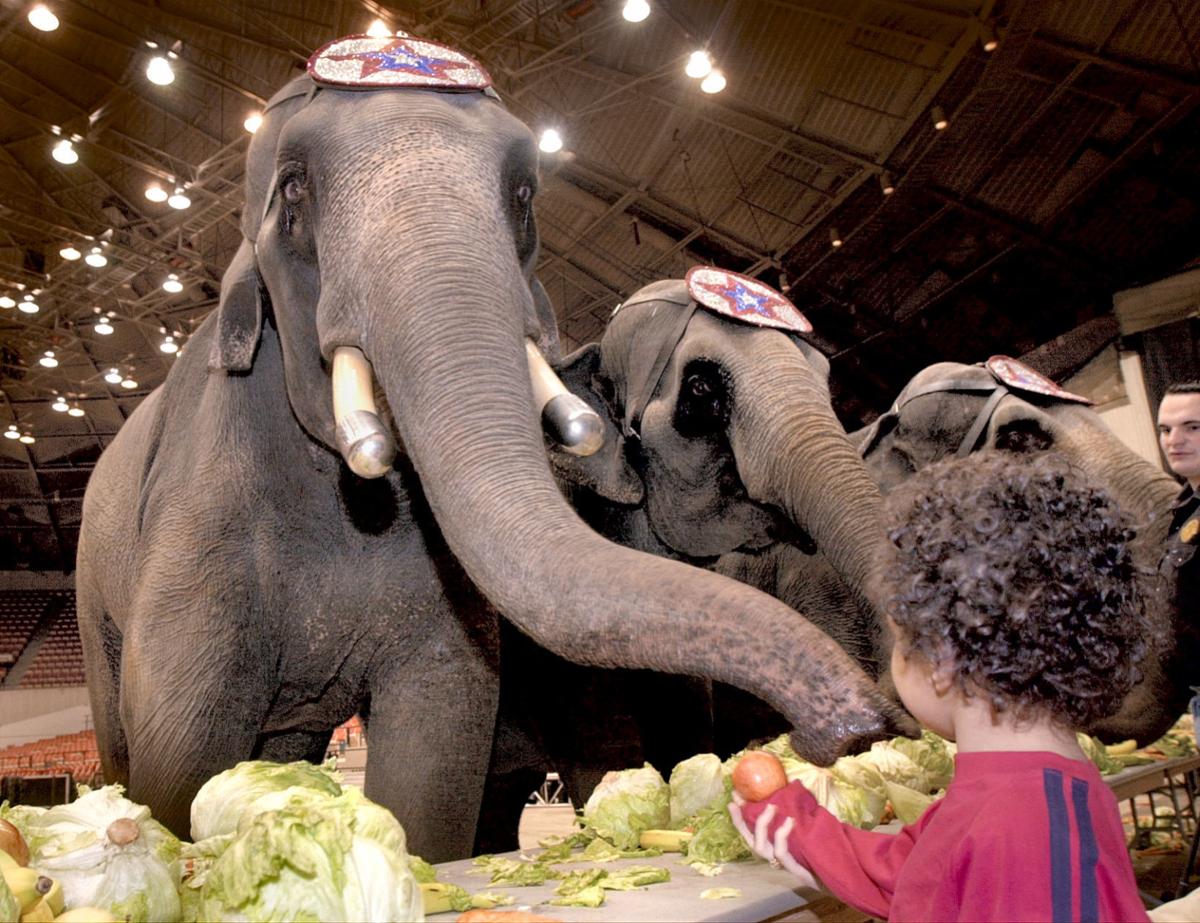 A child offers a circus elephant named Broadway Bo an apple during lunch at the  Dane County Coliseum in 2003. 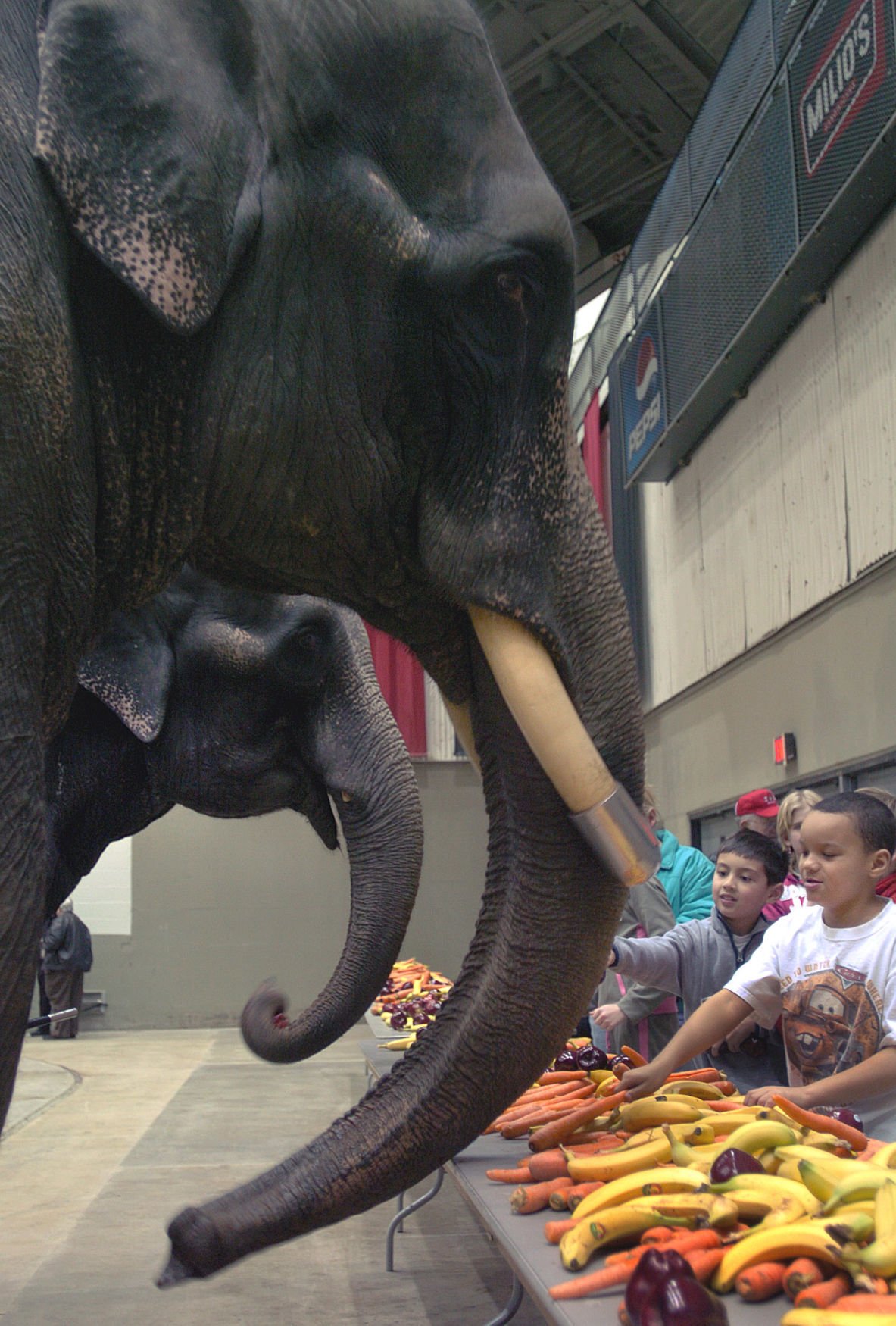 Children feed Bau, an elephant that performed at the Zor Shrine Circus in Madison in February 2007. 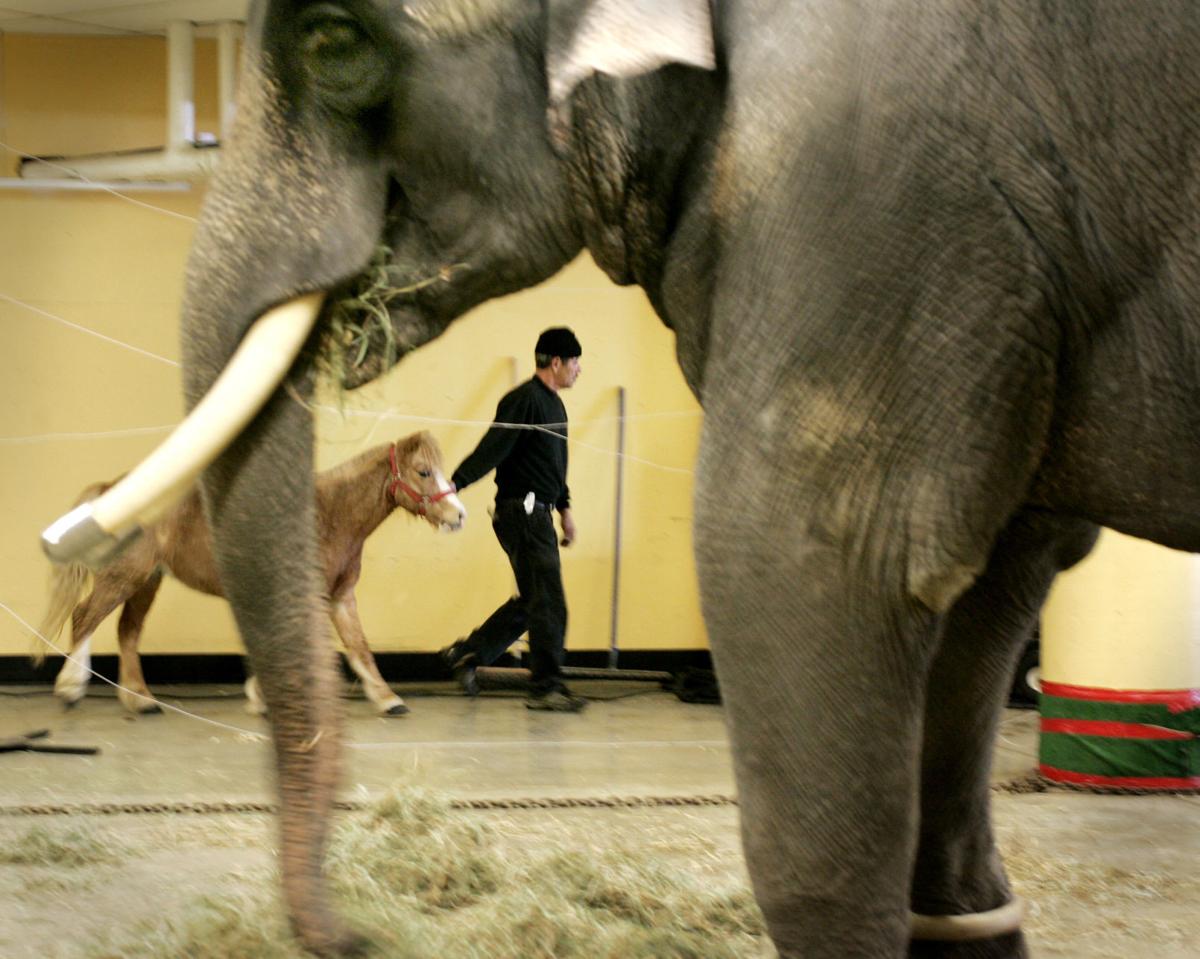 Bo, a 19-year-old Asian elephant, eats hay ahead of a performance at the Alliant Energy Center in 2005.

Elephants will perform at the Alliant Energy Center for the final time this weekend as a contract between the venue and the Zor Shrine Circus expires.

A new contract is in place to bring the circus back — without elephants — for the next five years, said Sharon Corrigan, interim director of the Alliant Energy Center.

The last performances of circus elephants in Dane County is cause for celebration among members of the Alliance for Animals, a local animal rights group.

“[This] will be the final year that sad, bullied elephants will be forced to do unnatural acts, walk around in circles so circus-goers can have their picture taken on a ‘wild’ animal, and endure the bright lights and loud music that is the opposite of their natural environment,” the group said in a statement.

For others, the shows Friday through Sunday will mark the end of an era. The Zor Shrine Circus has performed in Madison every year since the Alliant Energy Center opened in 1967, wowing many audience members with the largest land animals on Earth. Wisconsin’s storied history of circuses may also color area attitudes about animals in performances.

The Zor Shrine Circus will continue to tour with elephants in other cities.

Circus chairman John Thorstad said he isn’t worried about the quality of the circus without the animals, but acknowledged that the elephants have been one of the main attractions for many years.

“They will be sorely missed,” he said. “That’s the main reason a lot of people come, to have the chance to see elephants and to take a ride on one of them.”

There is some evidence to suggest the circus could suffer without elephants. In 2017, the famed Ringling Bros. and Barnum & Bailey Circus, part of which was founded in Baraboo, shut down after an 146-year run. Company executives cited declining ticket sales along with prolonged battles with animal rights groups and shifting public attitudes toward using animals as performers. The circus had experienced a dramatic drop in ticket sales after phasing out elephants the year before.

Bob Gorsuch, the Zor Shrine recorder, believes the traveling circus group responsible for putting on the show — Carden International Circus based in Springfield, Missouri — will find a way to fill the elephant-size hole in its performances here.

“I don’t think it’s going to make any difference,” Gorsuch said. “They put on a darn good circus and will continue to do so; they just won’t have the elephants. … They’ll continue to find new acts or some way to offset that loss, or at least that’s the hope and the plan.”

The circus plans to roll out animatronic animals and puppets and place greater emphasis on human acrobatics and other daredevil feats in the future, said Brett Carden, operator of Carden International Circus. He predicts nobody will notice the difference after a couple of years. Still, he encouraged “anybody and everybody to come out and see the elephants, because this is definitely the last time.”

The Alliance for Animals was one of the loudest voices calling on the Dane County Board to ban performances using elephants from all county facilities in 2012. Former 11th District Sup. Al Matano introduced such an ordinance, but the board modified it to accommodate a contract between Alliant Energy Center and the Zor Shrine Circus running through this year.

The modified ordinance banned new contracts with circuses and other performance groups that use elephants, ensuring that this year’s performances would be the last featuring the iconic animals.

At the time, Matano told the Wisconsin State Journal he would have liked the county to act more promptly against the use of elephants as entertainment attractions, but he accepted the compromise.

“We have eight years worth of circuses left, which is quite a few for a practice we’ve deemed inappropriate,” he said then. “But we’re moving in the right direction.”

The change has been a long time coming from an animal rights perspective, said Mary Telfer, former director of the Alliance for Animals.

“The animals are abused. That’s the bottom line,” she said. “Using them as entertainment is just plain cruel.”

In a YouTube video titled “Ban Circus Elephants in Dane County,” Alliance for Animals member Julie Grasso describes why using elephants as circus performers can be traumatizing for the animals.

“Some of the techniques used to train elephants in the circus are harsh,” she said. “There is a lot of documentation and footage that has come forward where elephants are taken away from their mothers as young babies. They’re chained up for days and days without food and water so they’re more compliant. They essentially break the spirit of the elephants. They use weapons such as bullhooks to poke at the elephants and hit them in sensitive areas — behind the ears, underneath the chin, behind their legs.”

Before the final show on Sunday, members of the Alliance for Animals and other local animal welfare advocates will gather for a protest outside the Alliant Energy Center.

“The protest will conclude with a celebratory toast for the elephants,” the group said in its statement. “May their lives be at least slightly improved.”

The Zor Shrine Circus, an annual fundraiser for the Shriners, will have several performances this weekend at the Alliant Energy Center. Tickets are available online at: zorshriners.com/circus

Coldest air of season has Wisconsin in deep freeze, but improving conditions ahead

Temperatures bottomed out well below zero Friday morning, but will rebound to the 30s over the weekend and the rest of February is looking good, according to forecasters.

Dane County is to be commended for passing a ban on performances with elephants at the Alliant Energy Center. Congratulations also to the cari…

A child offers a circus elephant named Broadway Bo an apple during lunch at the  Dane County Coliseum in 2003.

Children feed Bau, an elephant that performed at the Zor Shrine Circus in Madison in February 2007.

Bo, a 19-year-old Asian elephant, eats hay ahead of a performance at the Alliant Energy Center in 2005.