WINNECONNE — New flooring may be in order, but it’s unclear how long it will take for his calloused palms to heal.

Nathan Carroll is a push-up machine.

The exercise has taken a toll on his hands and created a worn spot on a section of his beige living room carpeting between his coffee table and 75-gallon fish tank filled with orange, well-fed goldfish.

By the time we arrived at his home at about 1:30 p.m. Thursday, Carroll had already recorded about 4,500 push-ups. And if it everything goes as he believes it will, Carroll will set the world record on June 13 for the number of push-ups in 365 consecutive days.

The divorced father of three hit 1 million push-ups on March 2, and on Wednesday blew past 1.4 million. Carroll’s sights are on getting to 1,500,231, one more than the record that has stood for nearly 32 years.

“I know I can do it as long as I stay healthy,” said Carroll, 45, shortly after ripping off three sets of 30 push-ups each. “It’s much more mental. An event like this, a challenge like this requires a lot of mental fortitude. Trying to think about 1.5 million push-ups over a year, the number’s just too big and it’s just too challenging. What I really focus on is what does my next hour look like and what do I need to to do in the next hour to accomplish the goal of the day.”

Carroll has clearly conquered the focus part of the deal. He’s also used a regimented routine, natural athletic ability and driving ambition, all in an effort to raise money for the Stephen Siller Tunnel to Towers Foundation’s Fallen First Responder Home program. The charity, named after a New York City firefighter who died on Sept. 11, 2001, pays off mortgages for the families of law enforcement officers and firefighters killed in the line of duty who leave behind young children.

Since 2014, the foundation has paid off the mortgages or provided housing for 250 families. That includes the mortgage for Mitchell Lundgaard, an Appleton firefighter who was shot and killed in 2019 while responding to a medical incident in the city’s downtown.

So far, Carroll’s “Push Through” campaign has raised over $37,000 for the foundation.

“We’re really anticipating that once he breaks the record that number will really go up,” said Trevor Tamsen, a Tunnel to Towers spokesperson. “We’re incredibly proud of him. He has pushed through injury, he’s pushed through COVID, he’s been doing this while working a full-time job and raising his kids. His dedication and commitment to the foundation, and his hustle delivering our message and being an ambassador, is incredible.”

A two-time Ironman competitor and long-distance runner, Carroll did 1 million push-ups in 2019 as a way to say thanks to law enforcement officers around the country. He did 5,000 push-ups during a 31-mile, 10-hour run in October during the Glacial Trail 50K in Greenbush and pumped out another 3,000 amid the 26-mile Jail Break Marathon in Wautoma in September.

Carroll has also taken breaks to do push-ups while mowing his lawn and shoveling snow. He has pushed them out in the balcony of his church, beneath the bleachers at sporting events and in his office at the Wisconsin Resource Center, a mental health facility in Oshkosh for prison inmates where he’s been employed the past 20 years as a social worker.

“They’re pretty supportive,” Carroll said. “Trying to balance this amount of push-ups with being a father and working full-time sometimes creates obstacles that you sometimes have to overcome. I try to weave my push-ups into my daily activity. To set aside time to do 4,000 push-ups is impossible. You have to really make it a priority and be willing to commit to it and embrace the fact that you have to weave that into your day.”

Every push-up is documented in a log book, and most are posted on his YouTube channel in time-lapse form. He also relies on witnesses to ensure accountability. Carroll has applied to Guinness World Records, which will collect video, personal verification letters and likely do interviews to verify his integrity.

Carroll grew up in Manawa, where he played high school football, basketball and baseball, and then spent seven years in the Marine Corps Reserves. He graduated from UW-Oshkosh in 2000. In March 2020, while recovering from a shoulder injury, Carroll raised $2,000 for personal protection equipment for local law enforcement by running 50 miles in 17 hours doing laps around his ranch-style home.

His lawn could use a mowing, and Carroll struggles to find time to ride the 2005 Harley-Davidson he inherited from his father, but he has a new smoker and has been experimenting with brisket, pizza and ribs. On occasion, there are breaks to grab an ice cream cone at The Well, a popular drive-in a few blocks away established in 1954 and known for its broasted chicken.

A U.S. flag is folded in a triangle and displayed in a box in the living room near where Carroll does the bulk of his push-ups. It was presented to Carroll’s family after his grandfather, a World War II vet who took part in the D-Day invasion, died a few years ago. Pictures of his children fill the walls, there are multiple electric guitars and two cats, Steamboat and Skunk, who occasionally make appearances in his YouTube videos. The log book sits open on the coffee table, where Carroll tallies his push-ups and double checks his math.

The daily routine for Carroll begins around 4 a.m. with stretching, breakfast and push-ups. His goal is to do 60 sets of 30 to 40 push-ups each before heading to work. He typically does them in three-set groupings with a five-minute break between each three sets. Push-ups continue in his office at work and then when he returns home. The most he’s done in a day is 7,000, but he has had to take up to five days off on two occasions time due to his nagging shoulder.

“But I’ve made that up,” Carroll said. “For the past five or six months I’ve felt pretty strong.”

Watch now: A helicopter lifts off on Mars and tears flow in Wisconsin

Ingenuity lifts off from the Martian surface with technology developed by a former Madison man.

The main severe weather risks are winds gusting to 60 mph, hail up to an inch in diameter, lightning and heavy rain, according to forecasters. 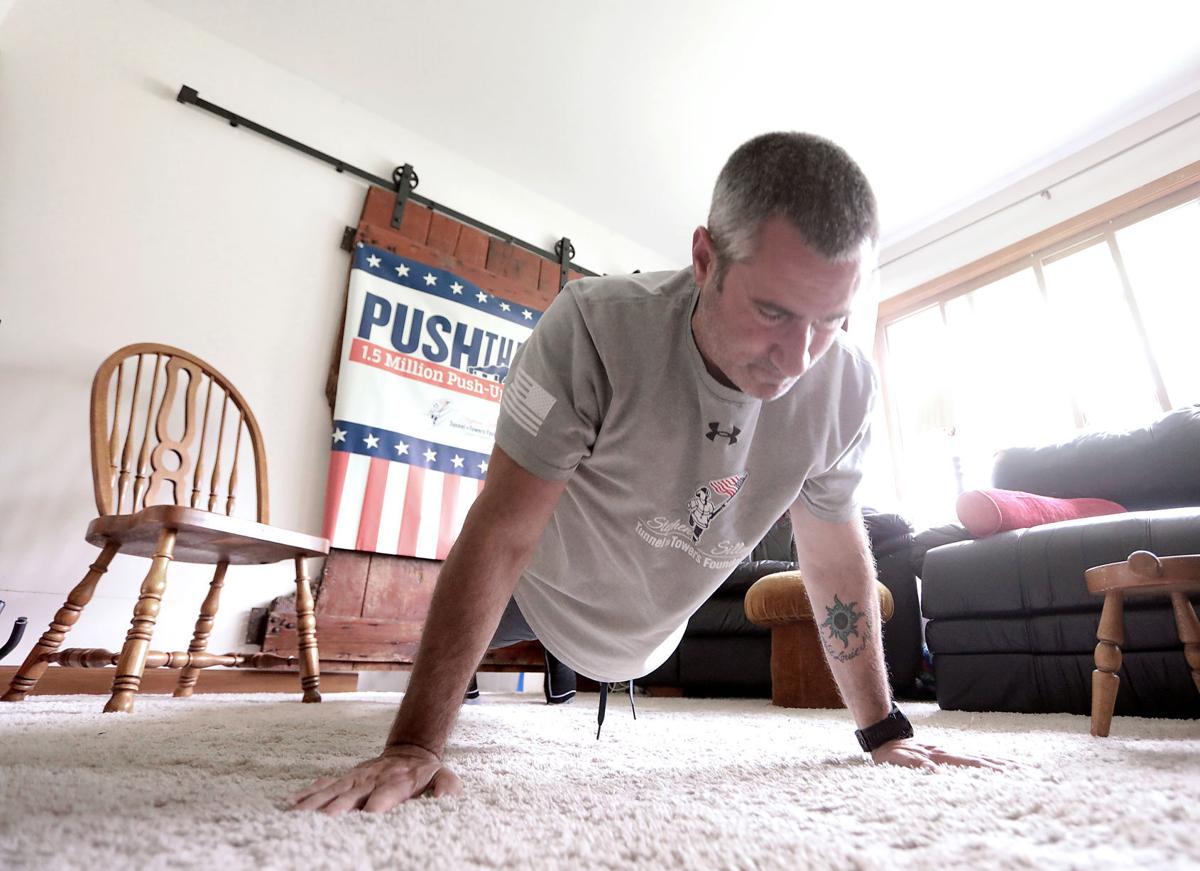 Nate Carroll continues his quest to hit a world record of just over 1.5 million push-ups in a year. The Winneconne social worker is raising funds for the Stephen Siller Tunnel to Towers Foundation, which pays off mortgages for the families of law enforcement officers, firefighters and other first responders killed in the line of duty. 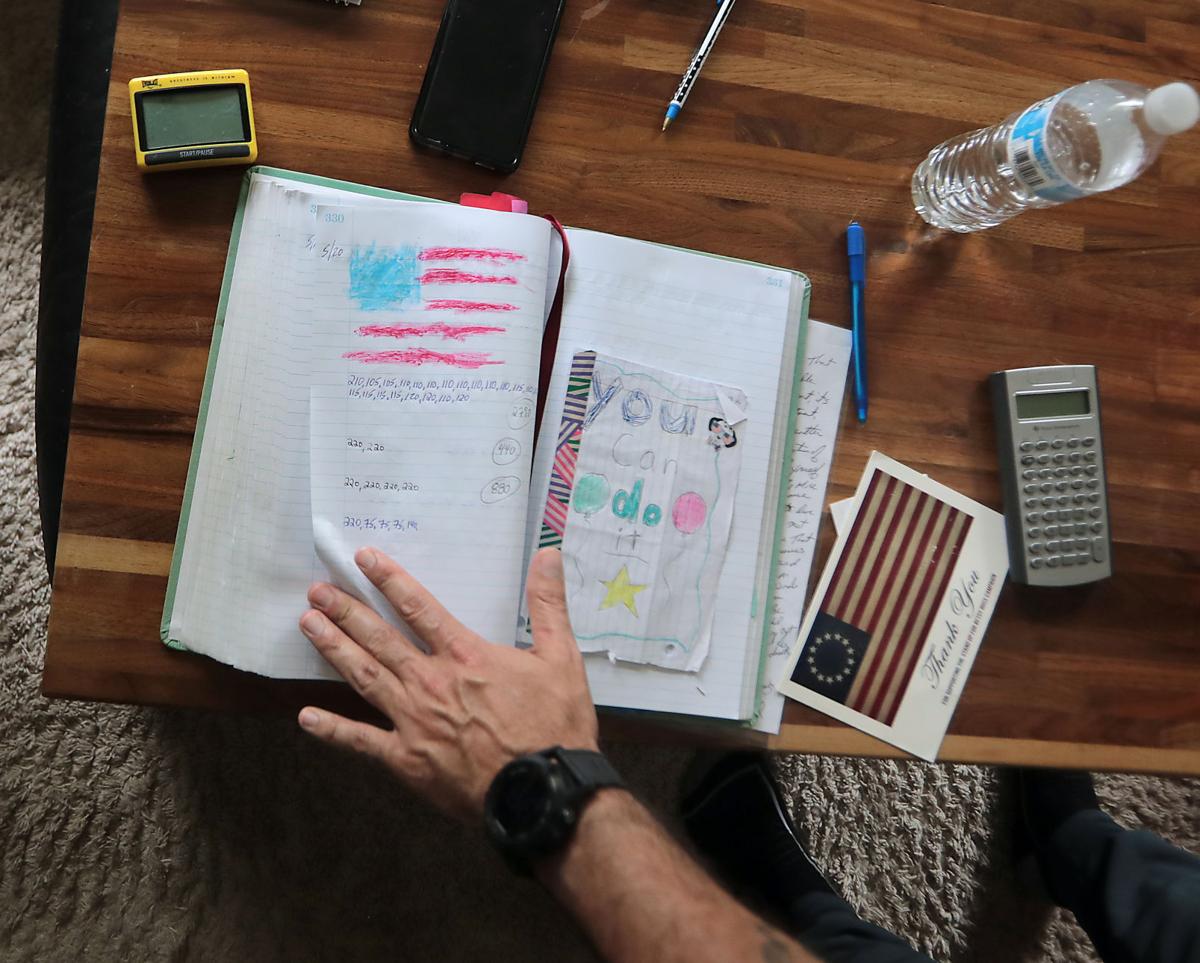 A log book, illustrated by his children, tracks Nate Carroll's daily push-up totals as Carroll continues his quest for a world record that has stood since 1989. 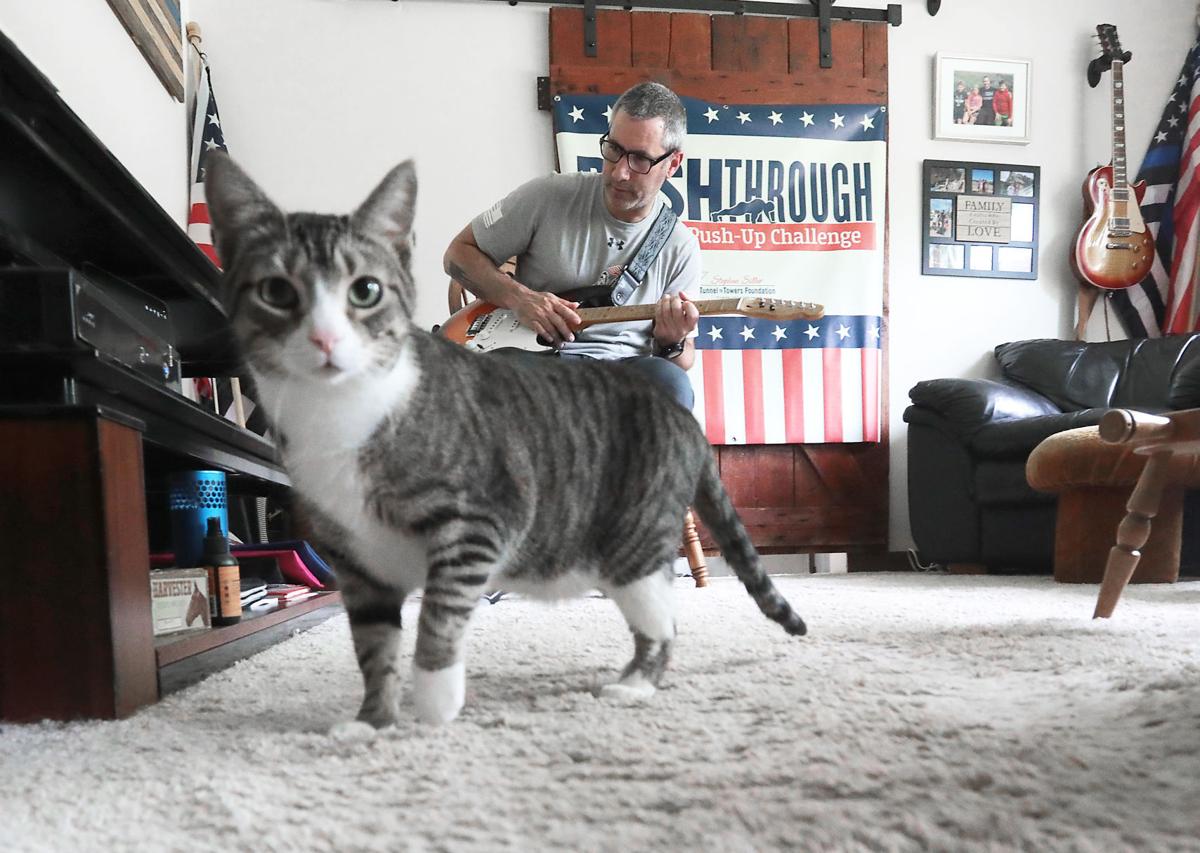 Nate Carroll performs the national anthem on electric guitar at his home in Winneconne during a break from doing push-ups. His cat, Steamboat, is more interested in the camera, but Carroll's efforts to set a new world record are raising thousands of dollars for a charity that pays off mortgages of fallen first responders. 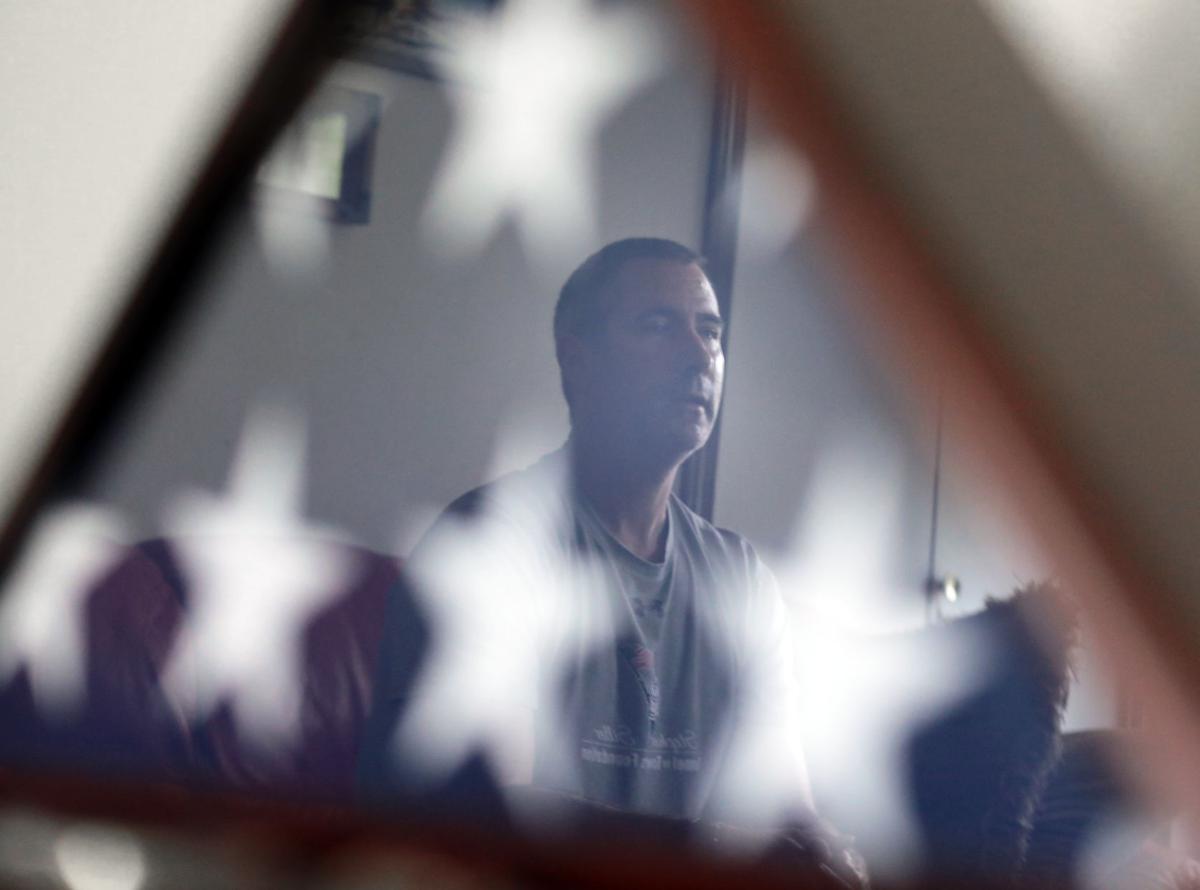 Nate Carroll is reflected in a U.S. flag memorial presented to his family after his grandfather, a World War II vet who took part in the D-Day invasion, died a few years ago. 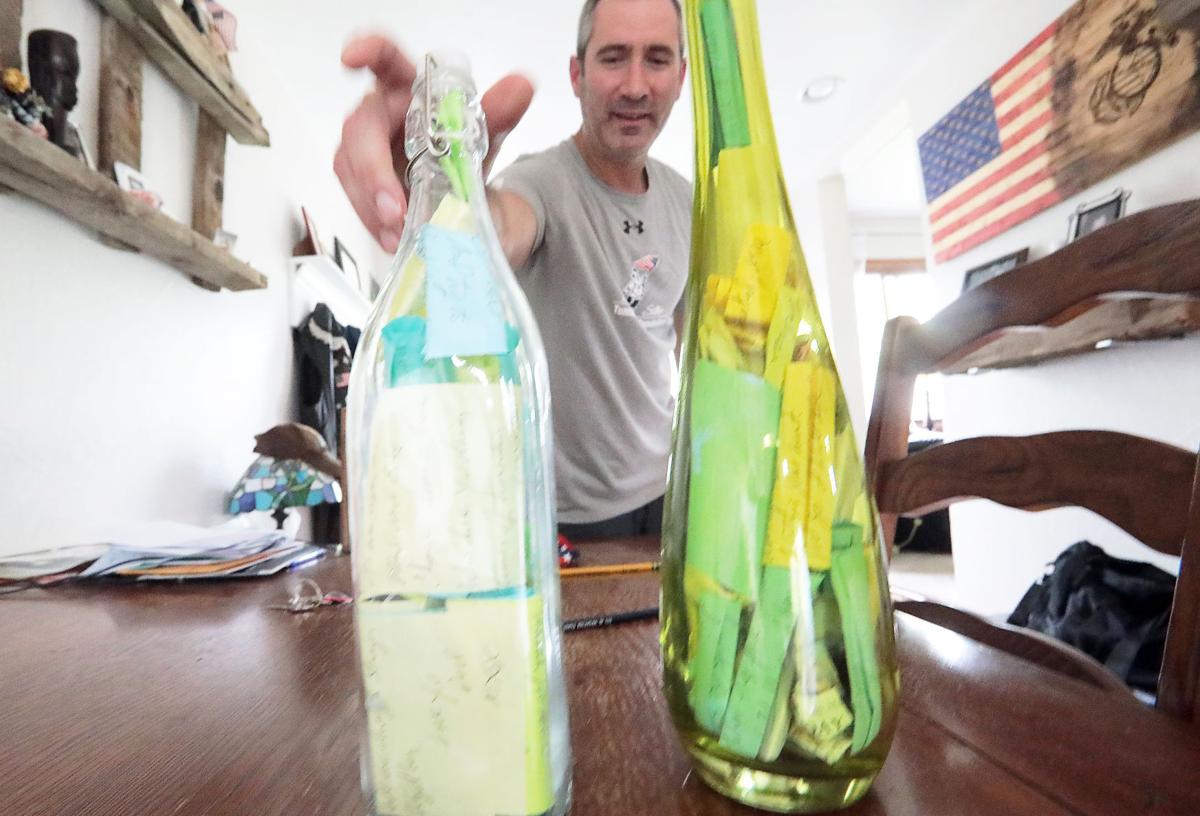 Family is important to Nate Carroll. These are a just a few of the many bottles he has that hold notes of encouragement and love he has written to his three children and saved over the years. 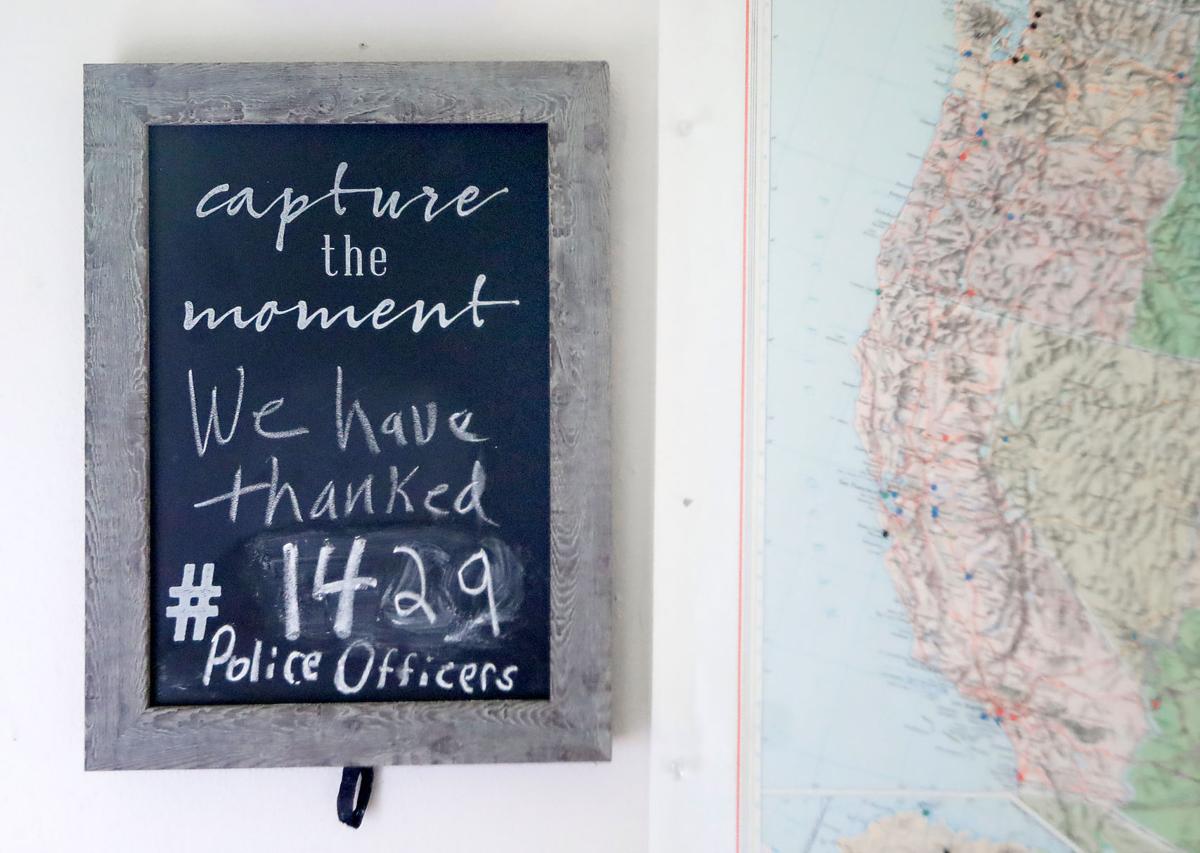 A sign adjacent to a map of the United States at Nate Carroll’s Winneconne home logs the number of times he and his family have thanked first responders and police officers. 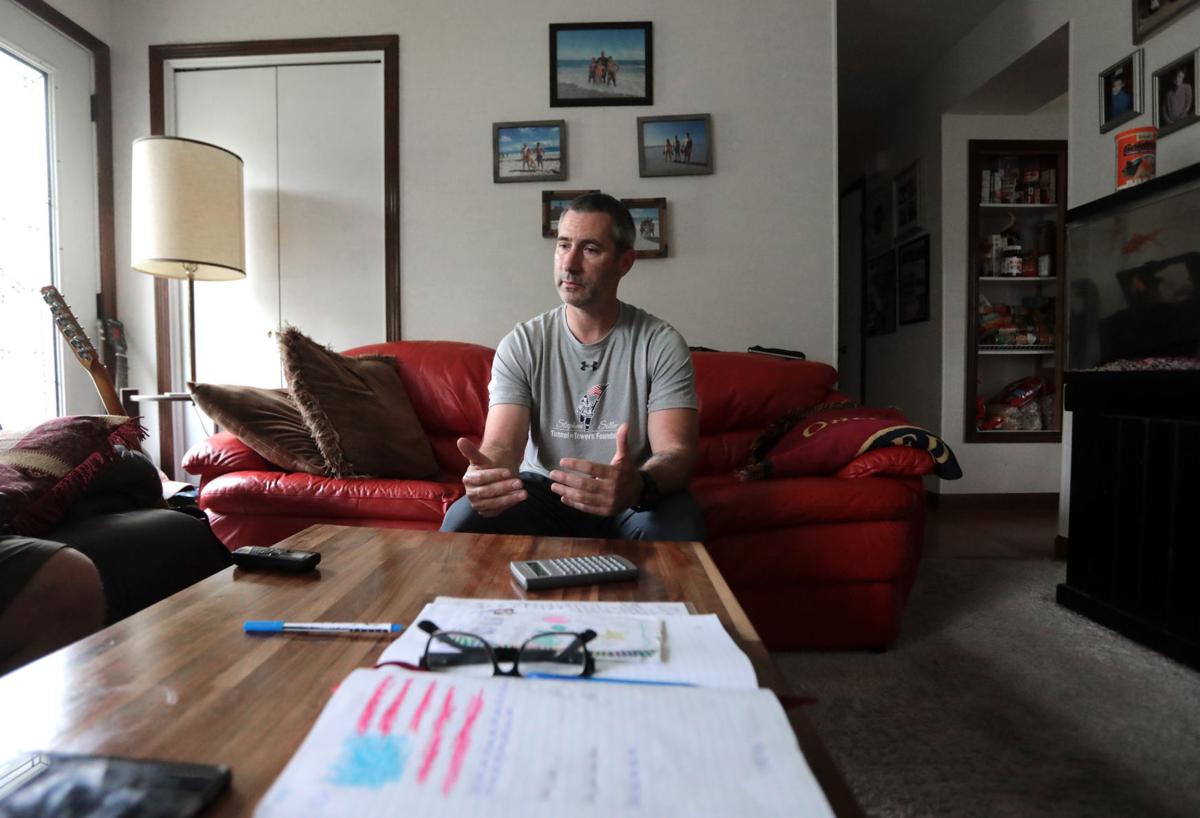 Nate Carroll's living room is where he does the bulk of his push-ups.