More than two years after a natural gas explosion leveled a section of Sun Prairie’s Downtown, a replica of a historic bell tower was installed Wednesday atop a building that was battered during the blast.

Just after sunrise, a team of workers from J.H. Findorff & Son construction company used chains and a crane to hoist the bell tower on top of the three-story tower base attached to the old city hall at 100 East Main St. Findorff created the feature in its shop and then transported it to Sun Prairie, where it fit like a puzzle piece.

Although the original bell tower was removed decades ago after it was destroyed in a fire, its replacement is a “nice story of recovery” for the downtown after the July 2018 explosion, said architect Douglas Pahl, a partner at Aro Eberle Architects, which worked on the restoration project.

“It’s great to see that building coming back to life,” Sun Prairie Community Development Director Scott Kugler said. “It’s been sitting in a damaged state for a while.”

At about 7 p.m. on July 10, 2018, gas from a main breached by construction workers was ignited by a still-unknown source, causing an explosion that killed Sun Prairie Fire Capt. Cory Barr as he was clearing people from the area, injured two other firefighters, flattened buildings and spread debris for blocks.

The old city hall building, located at the corner of East Main and South Bristol streets, was right on the edge of the blast radius. David Wilder, one of the building’s owners, said it was left with shattered windows, roof damage, split rafters, leaking pipes, destroyed cabinets and drywall that had been pulled off of the walls by the force of the blast.

“I’m sure it’s emotional for a lot of people,” said Nicole Plautz, a Sun Prairie resident and marketing representative for Findorff. “It’s nice to see this building still standing.”

Plautz said the building dates to 1895. Pahl said it used to house the police and fire station, the jail and city hall.

“I think it’s important,” Pahl said. “It’s meaningful to bring back a structure that was part of the original founding of the city.”

Wilder said he planned to complete some sort of restoration project on the building when he bought it in May 2018. Two months later when the building was damaged in the explosion, the need for repairs increased the urgency behind the project.

Wilder worked with the Sun Prairie Historical Museum to raise money, donating about half the funds himself, for a study to get the 100 and 200 blocks of East Main Street added to the National Register of Historic Places. That allowed him to secure tax credits to help pay for the restoration.

Flavors Wine Bar is the current tenant in the building, said Brian Wolfe, the building’s other owner. The wine bar, with eight wines on tap, is in the first floor. An event hall that can hold up to 125 people is on the upper floor.

The bell tower isn’t open to the public, nor does it have a bell — yet.

“With the right community support, and the right bell, we could get one back up there,” Wilder said.

Wolfe said he hopes the building will become a community gathering spot.

“I think this is a staple for the downtown. Quite frankly, it’s a landmark,” Wolfe said. “We wanted to do our due diligence in making sure that it was a building that you would see and you could be proud to have in the community.”

Here's a look at all of the news coverage of a massive gas explosion and fire on July 10, 2018, in downtown Sun Prairie that killed a firefighter, injured another and destroyed several buildings.

"The city's going to need to participate in funding," Mayor Paul Esser said, and while it's not a landowner, it's a "partner in the sense of getting things done."

Contractor in Sun Prairie explosion fined $25,000 for not calling before dig

The Public Service Commission will hold back-to-back sessions on June 14 to gather evidence on whether drilling company VC Tech violated state law when it failed to notify the state utility call center, known as Diggers Hotline, before starting work on July 10.

Dane County Circuit Judge Valerie Bailey-Rihn said it's too early in the lawsuits and there's not enough information to decide whether the lawsuits are barred by a legal doctrine called the Firefighter's Rule.

A ribbon is cut, the road will soon open but downtown Sun Prairie is not yet whole

Repairs are still ongoing while some business remain closed and others have relocated.

Heroic efforts by Sun Prairie's fire department prior to explosion shows off its training and professionalism, chief says.

The special night will raise funds and recognize those who responded to the recent explosion in Sun Prairie. That includes firefighter Cory Barr, who was killed.

Charges not off the table in Sun Prairie explosion; part of Main Street remains closed to traffic

Many downtown business owners have not had a chance to evaluate any potential losses and have not had access to their businesses.

The blast zone will remain off limits and is protected by temporary cyclone fencing.

A contractor hit a natural gas main causing a massive explosion that leveled the Barr House and set fire to Glass Nickel Pizza.

New boundary lines became necessary after the district overwhelmingly approved the construction of a second high school in April 2019. The School Board is expected to take up the topic Monday.

Some middle and high school students in Sun Prairie will get shuffled around to different schools within the district in fall 2022 because of the new map. 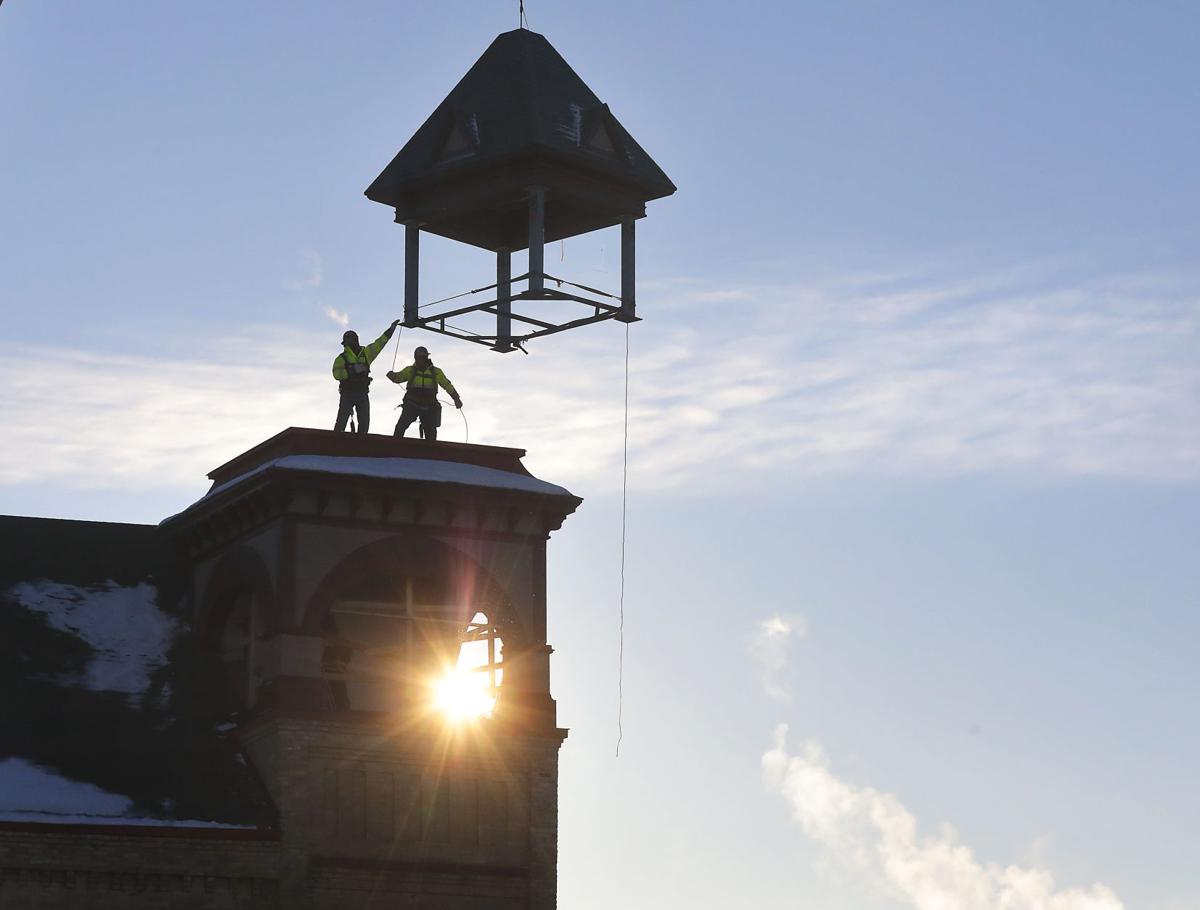 Workers with J.H. Findorff & Son lower a reconstructed bell tower atop the historic former city hall building in Sun Prairie on Wednesday, about 2½ years after an explosion leveled a section of the city's downtown. Destroyed by a fire decades ago, the bell tower was assembled off-site by the company, and its placement is part of a larger renovation of the 1890s-era building. 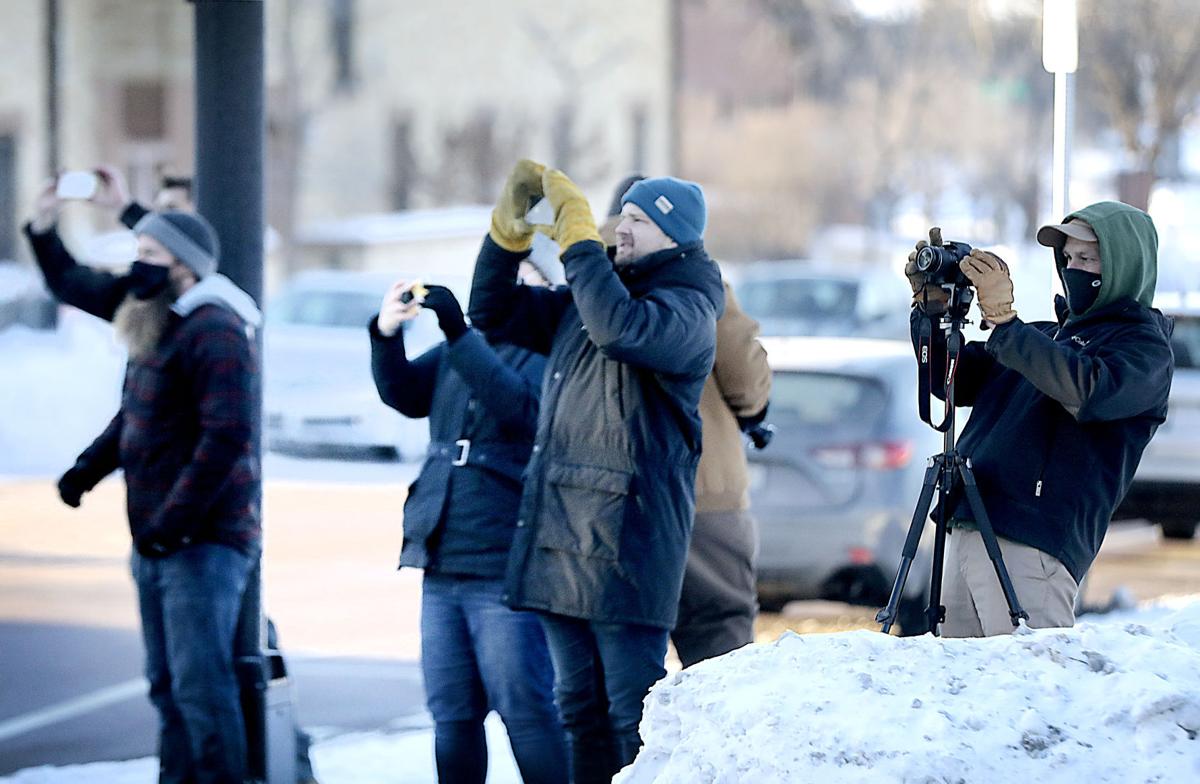 Bystanders watch at the corner of West Main and South Bristol streets as workers install the bell tower atop the former city hall building. The tower's revival is a symbol of restoration for Sun Prairie after the July 2018 explosion that destroyed a part of the block. The historic city hall building survived the blast, but sustained significant damage. 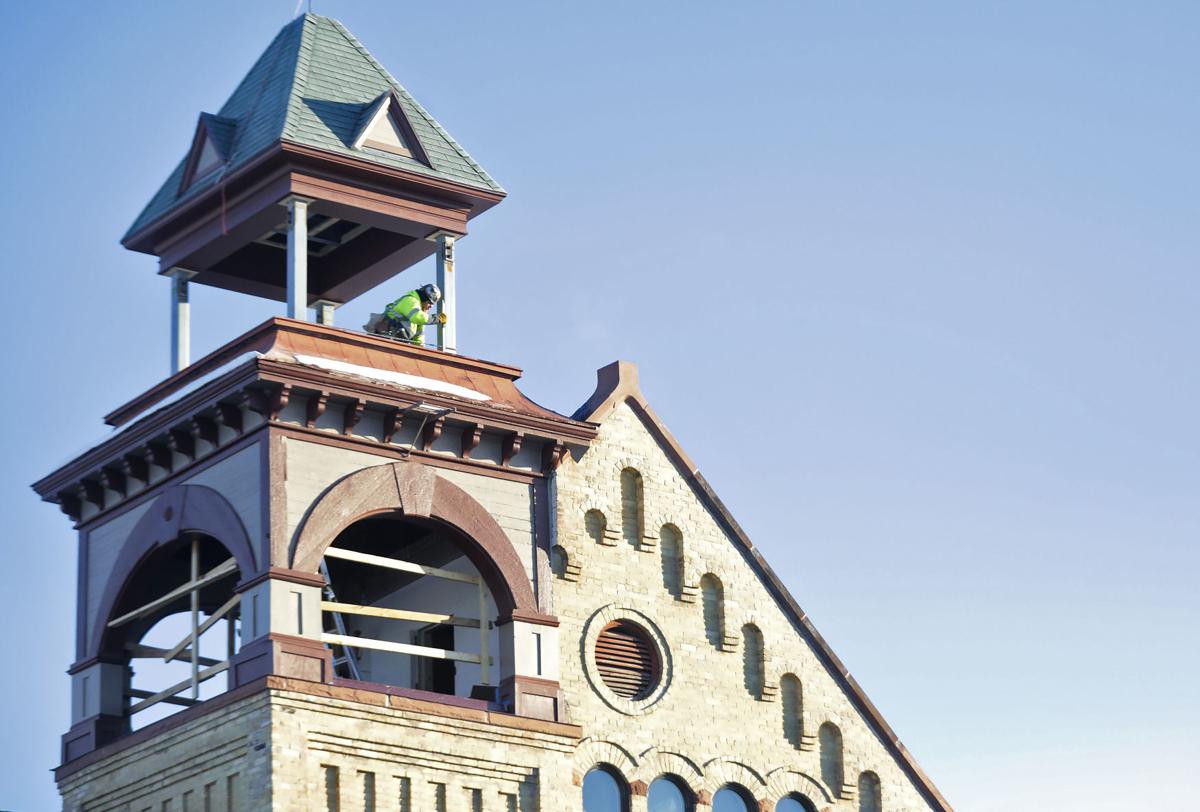 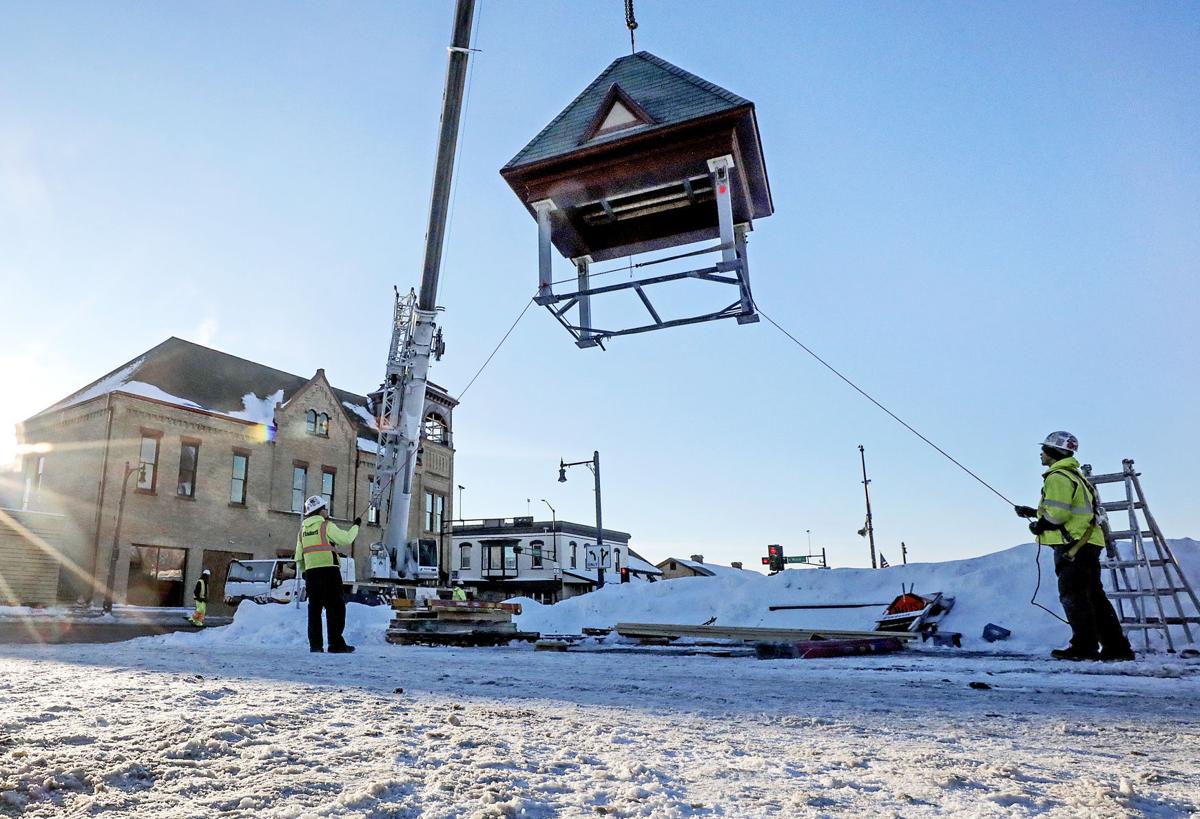 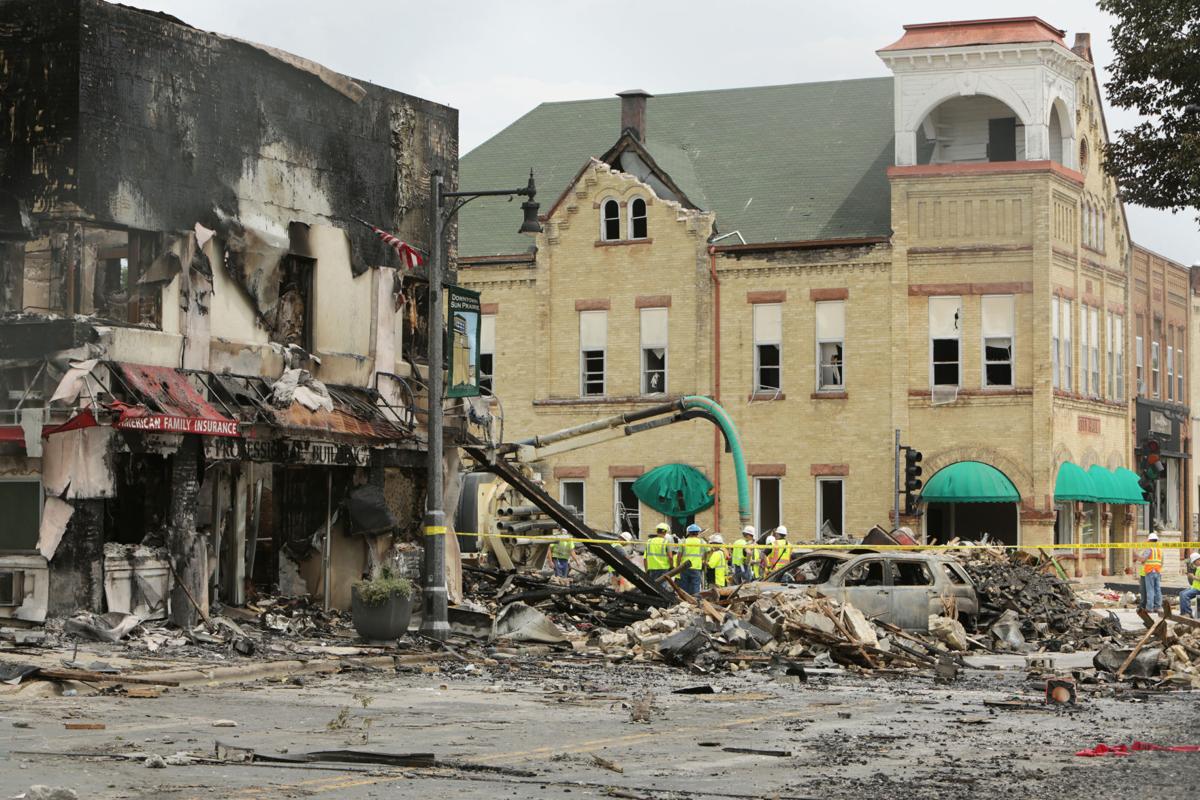 The old city hall building is seen in the background of the aftermath of a natural gas explosion in downtown Sun Prairie in July 2018. 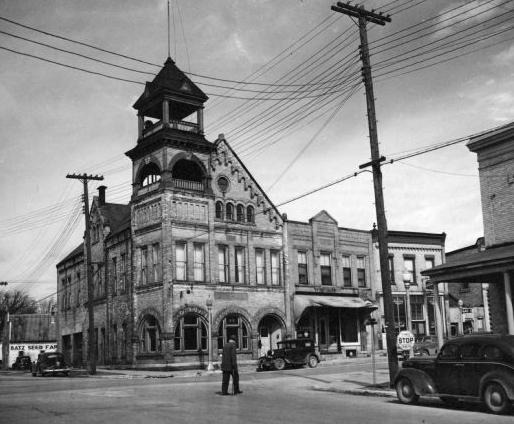