PLATTEVILLE — The new beginnings were plentiful at this old-school way of commerce.

The broccoli plants were three inches high, flats of pansies and impatiens were waiting to bloom, and hundreds of hanging baskets had yet to see a front porch.

A food trailer was well stocked with fresh, homemade donuts, breakfast sandwiches of egg and bacon and promises of rhubarb pie later in the season.

Even the auctioneer was a rookie. Eugene Hostetler, a farmer from Boscobel, completed auctioneer school last fall in Montana. Friday was his first gig, and it came in the recently finished barn that holds the newly formed Platteville Produce Auction.

The $700,000 barn was built primarily with volunteer labor and is located in the town of Lima along Highway D, a few miles north of Platteville. The facility is owned by a collection of about 75 shareholders and is providing an alternative spot for Amish and Mennonite farmers to sell their products. Many had been taking their goods to an auction barn north of Fennimore, but the Platteville facility is providing a more convenient spot for those who farm in southern Grant, northwestern Lafayette and western Iowa counties.

It’s also a shorter drive for buyers, some of whom own roadside stands or grocery stores, or are simply bidding on items for their homes.

Lori Portner, who owns Murphy’s Gardens in Galena, Illinois, grows many of her own flowers and vegetable plants but when demand has been high, especially in the spring, she has used for the past 10 years the Fennimore Produce Auction. But last week Portner was among more than 30 registered buyers to bid at the Platteville auction. Portner’s unclear if she will continue buying in Fennimore.

“I saw Fennimore getting busier and busier every year so I think there’s more demand. And so I think this is a good thing,” Portner said, in between bids for hanging baskets and four-inch-tall annuals. “The prices are very good today, but I expect they’re going to go up when more people get to know the quality that’s here. I hope they go up for the growers.”

A sampling of winning bids from Friday saw 12-inch hanging baskets selling for $8 to $11, but sold in lots of 10 to 20 at a time. Potted bowls of pansies, 15 per lot, were going for $6 each, while trays of young tomato, cauliflower and lettuce plants were being had for between $7 and $11 each. The buyer was required to purchase eight trays at a time, each of which held 15 to 18 plants.

The auction also featured outdoor planters and yard decorations made from pine and cedar. They took the form of small wheelbarrows, carts and wishing wells, and were built by Amos Stoltzfus, who lives just north of Belmont. The high bidder on most of those items was Aaron Glick, who has a country store south of Belmont near the intersection of highways 81 and 126.

Toward the end of the auction, the items were loaded onto a truck owned by Mark Groom, who specializes in transporting people and items for those who don’t own vehicles. Groom purchased the 25-foot-long truck in January for $8,600 from the UW Swap Shop, specifically to haul items to and from the Platteville Produce Auction. Earlier in the day, Groom had delivered the wooden items to the auction for Stoltzfus, who had been selling in Fennimore.

Stoltzfus has been instrumental in the creation of the Platteville Produce Auction and is on its board of directors. He and others began talking in early 2020 about building the facility. The foundation was poured last fall.

“There was just a lot of support to having something closer to Platteville,” Stoltzfus, 42, said. “It’s an opportunity to make a living right on the farm on a small scale.”

Other produce auctions can be found in Withee, located between Wausau and Eau Claire and home to the Central Wisconsin Produce Auction that sells three days a week. The Growers Produce Auction is located southeast of Cashton in rural Monroe County, while the Tri-County Produce Auction near Dalton offers up products from Green Lake, Dodge and Columbia counties.

The Amish and Mennonite farmers of Grant County had been selling much of their produce at Cashton, but in 2007, worked together to purchase land and build the auction barn north of Fennimore. The Platteville facility, which measures 80-feet wide and 200-feet long, is providing an outlet further south. Some of the growers no longer sell in Fennimore, and the new facility also has attracted some who are new into the wholesale business.

Each auction, which begins at 9:30 a.m., can last from 2 1/2 to three hours, depending on the time of the year and the number of items available. This week there is only an auction on Friday, but from May through the first week of October auctions are held every Tuesday and Friday. The sales are held only on Tuesdays the last three weeks of October.

Kevin Hall, who puts on two horse auctions each year in Mineral Point, was asked to manage the new Platteville Produce Auction since he was familiar with auction processes. On Friday he assisted Hostetler, the auctioneer, by using a four-foot-long yellow plastic paddle (normally used to help herd cattle) to point to items up for bid. At the same time, Hall kept an eye out for nodding and shaking heads, pointing fingers and raised cards from the assembled bidders.

“Everything’s grown local. We’ve got good soil around here to grow good produce and a lot of family farms,” Hall said. “As the year progresses we’ll get more into produce, a lot of tomatoes, peppers and (cucumbers for) pickles. Toward fall we’ll get pumpkins, watermelon and cantaloupe. There’s been strong demand. People want to buy local.”

But while the auction is primarily attended by those buying at the wholesale level, anyone can register on site for a bid number.

Angie Maag, who will graduate this spring from UW-Madison with a journalism degree, came with her mother, Amy, to buy pansies, hydrangeas, hanging baskets and some of the woodworking by Stoltzfus for the family home in Fennimore.

“My mom told me I had to keep it under $300, but I’ve already spent like at least $75,” Angie said early on in the auction. “I’m super excited to take a bunch of stuff home even if it doesn’t all fit in the car.” 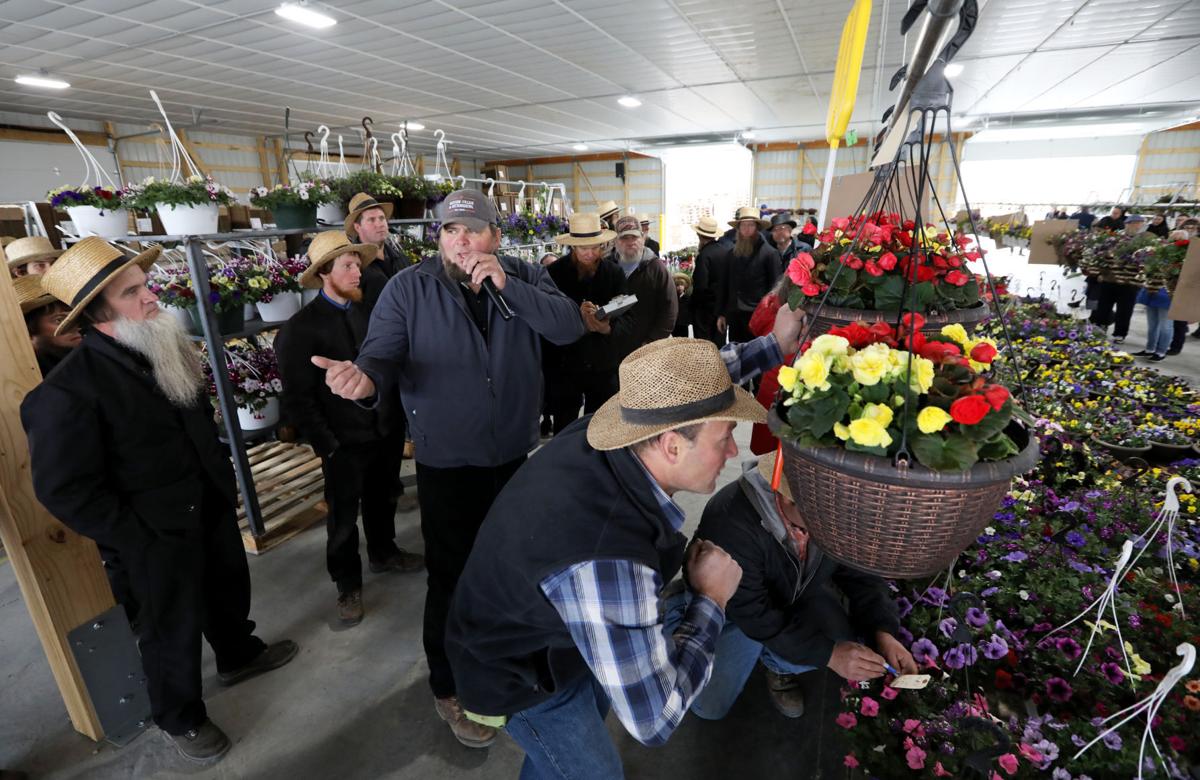 Auctioneer Eugene Hostetler, center, looks for bids on flower baskets Friday during the inaugural auction at the Platteville Produce Auction in the town of Lima, a few miles north of Platteville. Kevin Hall, crouched in the front and the auction's manager, keeps an eye out for bids in the new $700,000 facility that sells, at this time of the year, flowers, vegetable plants and wooden planters from Amish and Mennonite farmers. 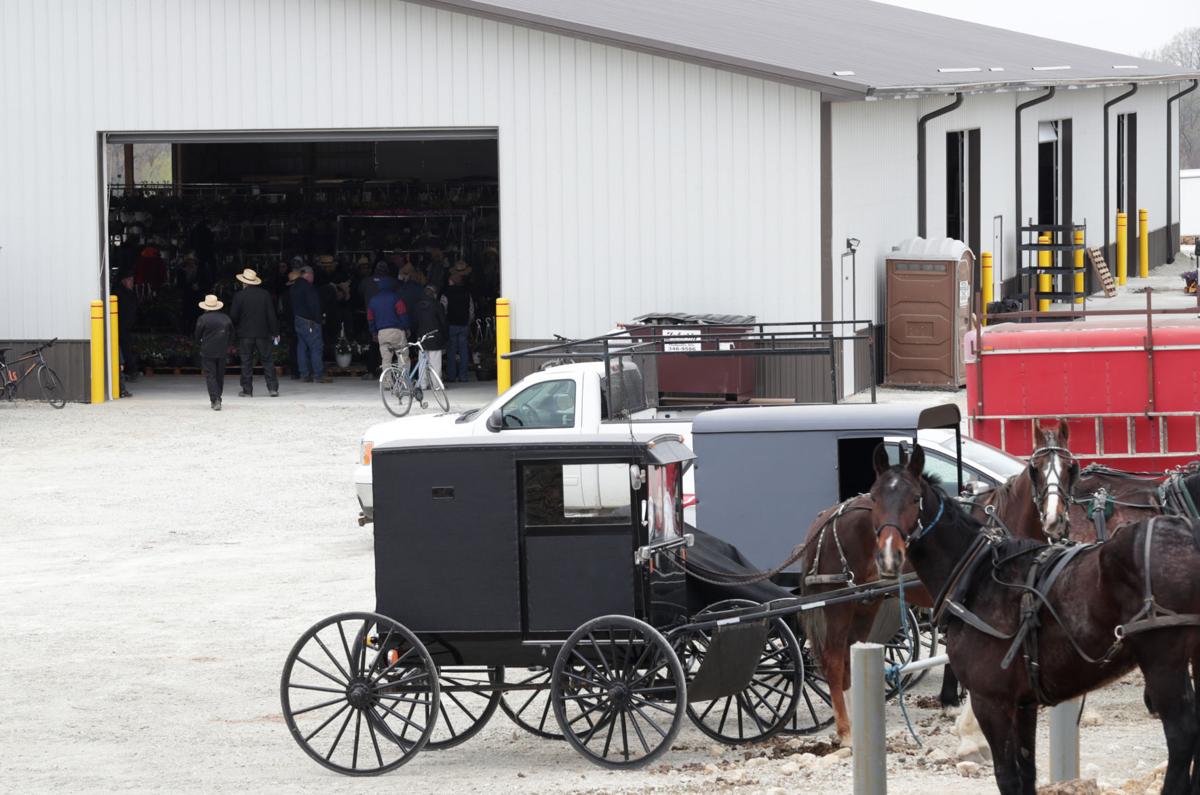 Only a few horses and buggies could be found Friday at the new Platteville Produce Auction. Most arrived in vans, trucks or cars, or rode their bikes. 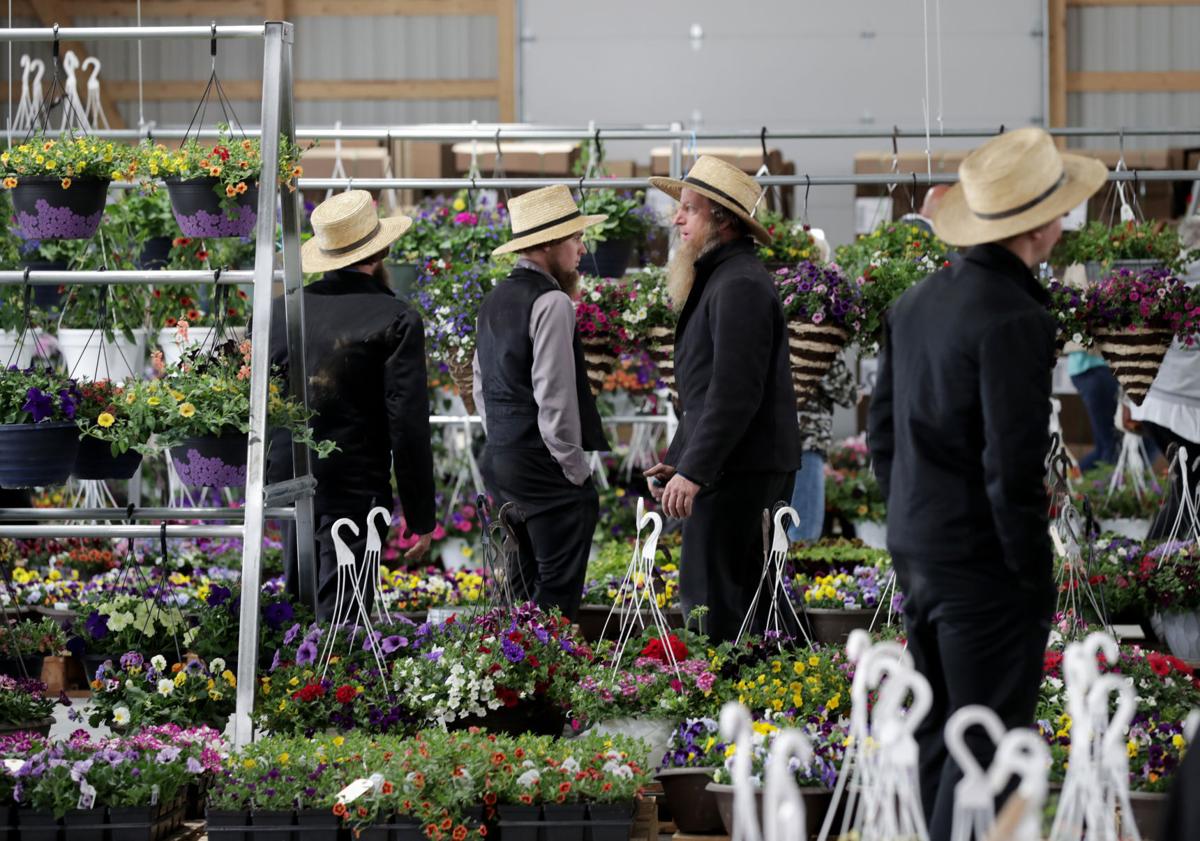 Most of the sellers at the Platteville Produce Auction are Amish and Mennonite farmers who had been selling at an auction barn in Fennimore. The new Platteville facility offers a more convenient location for many who live in southern Grant, northwestern Lafayette and western Iowa counties. 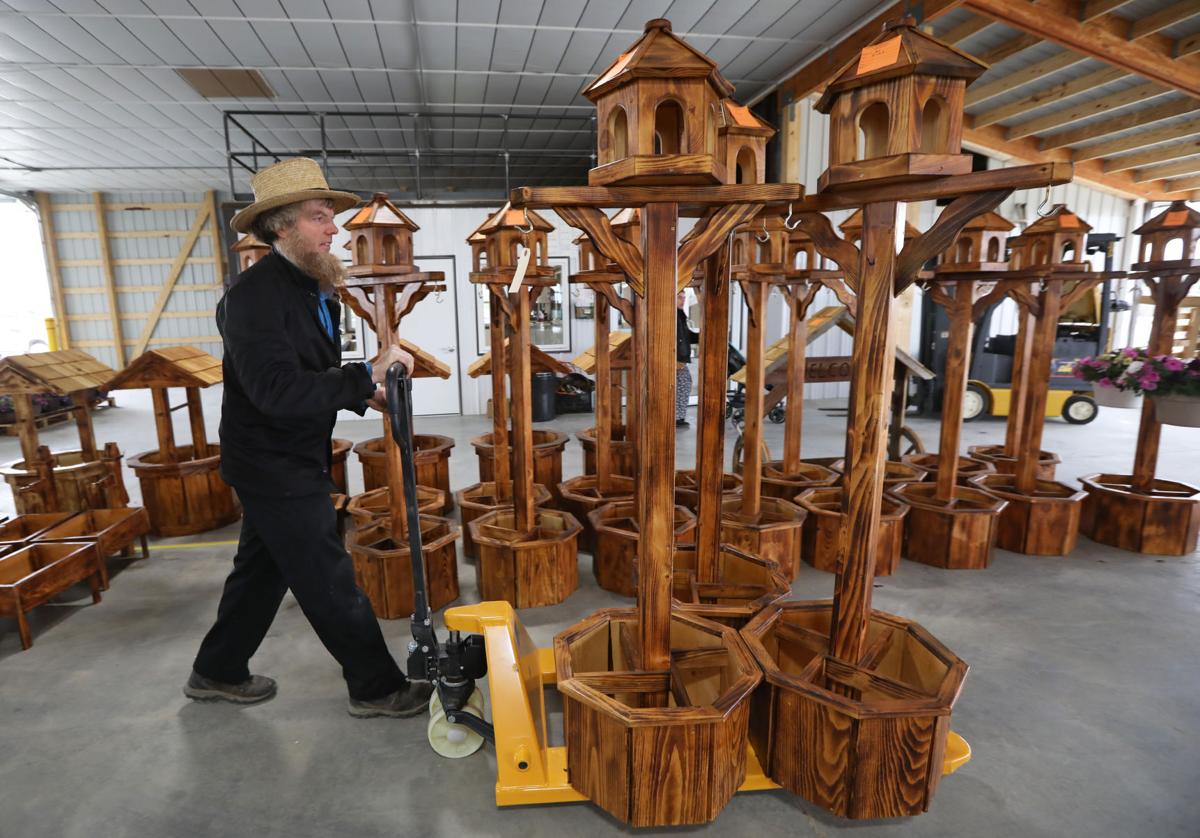 Amos Stoltzfus moves birdhouse planters he built that were sold during a live auction at Friday's Platteville Produce Auction. Stoltzfus farms and does woodworking near Belmont and is on the board of directors for the auction barn. 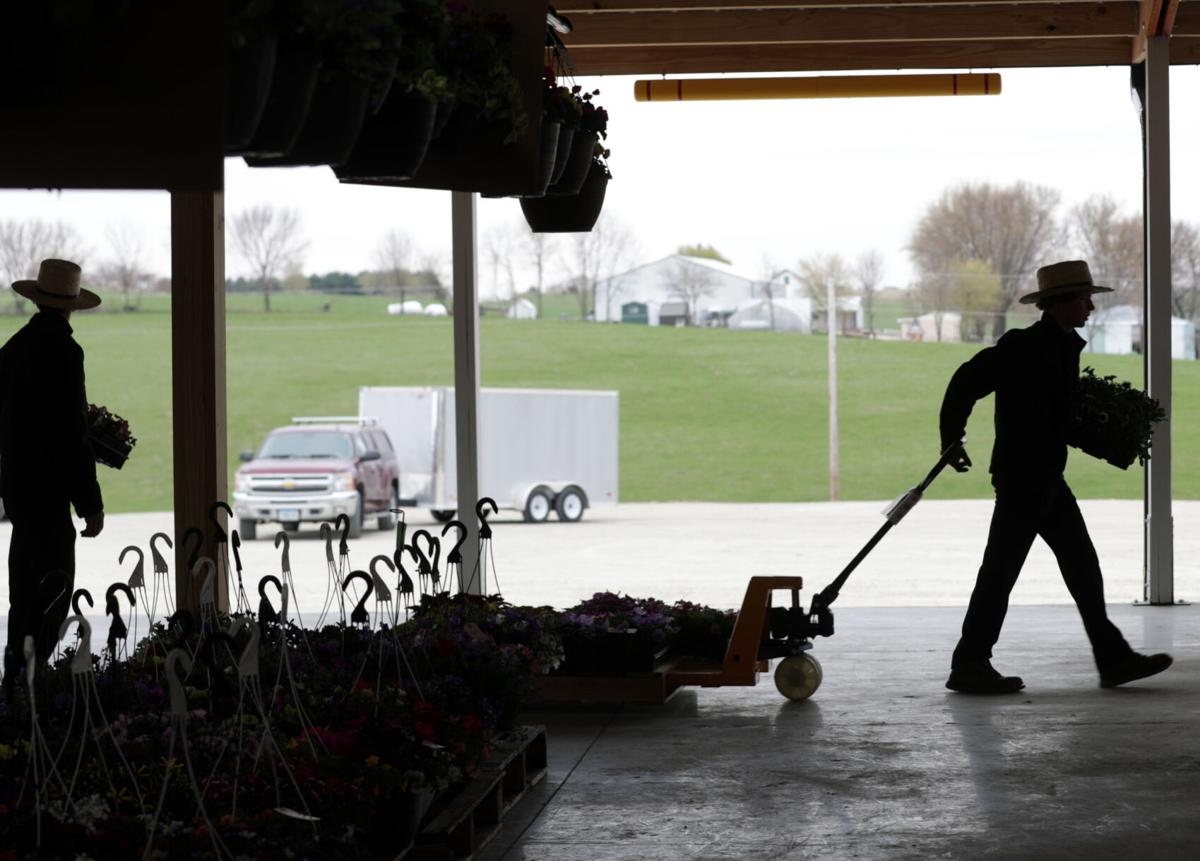 A worker at the Platteville Produce Auction uses a pallet jack to move flats of recently purchased plants. 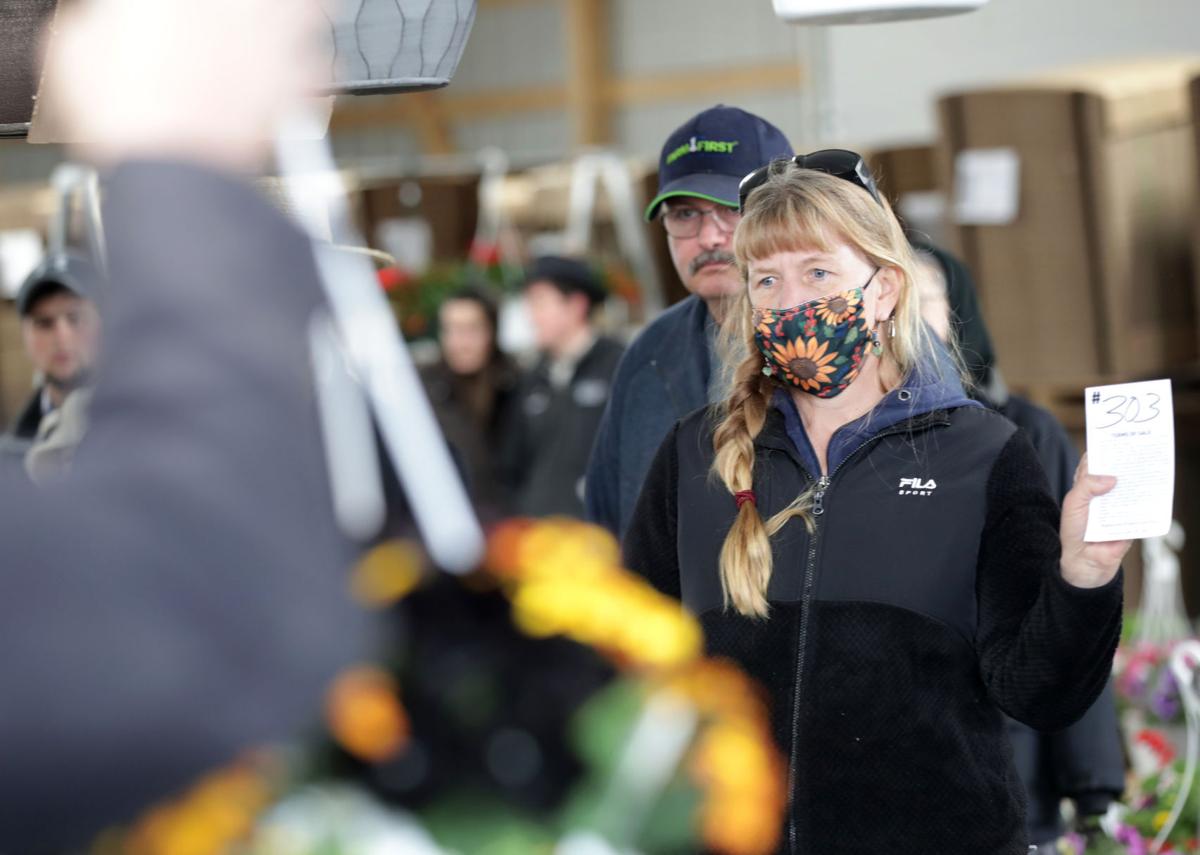 Lori Portner of Murphy's Gardens in Galena, Illinois, bids on flats of flowers during Friday's auction. Portner has in the past used the Fennimore Produce Auction, but the new Platteville Produce Auction is more convenient. 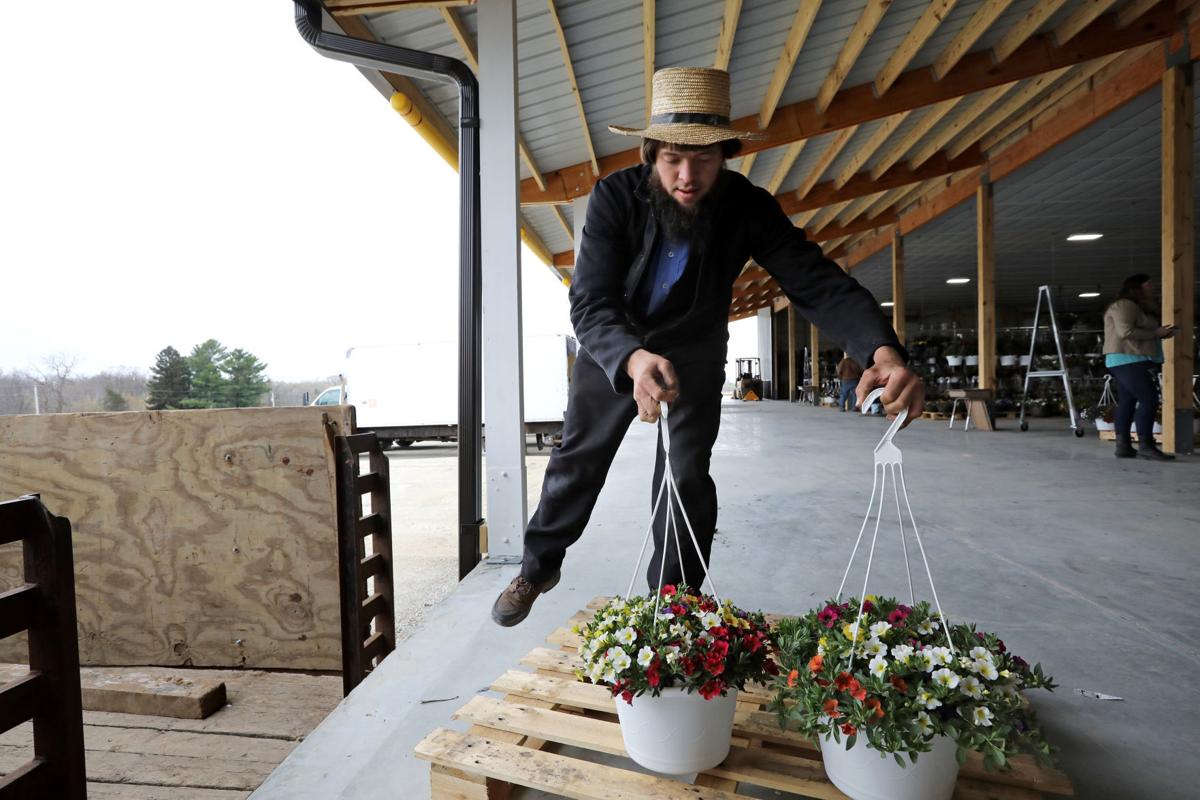 Henry Beiler, of Platteville, helps unload flowers to be sold during a live auction at the Platteville Produce Auction. The flowers and young vegetable plants are grown in hoop houses and greenhouses by Amish and Mennonite farmers in the surrounding area.