Wooden observation towers dot Wisconsin, provide unobstructed, picturesque views and have been the settings for more than a few family photos.

There’s a tower at High Cliff State Park near Sherwood in Calumet County that provides sweeping views of Lake Winnebago and another at Copper Falls State Park in central Ashland County that helps show off some of the Chequamegon-Nicolet National Forest.

Even the state’s highest points, like Timms Hill and Rib Mountain, have towers. Blue Mound State Park has two towers. One provides views toward Madison, the other towards Dodgeville and the Wisconsin River Valley.

Eagle Tower is the newest in the state and is providing scenic views of Horseshoe Island, the village of Ephraim and, on a clear day, Michigan’s Upper Peninsula 14 miles away. And while those views are still being photographed and taken in, the tower itself is taking up storage space on the digital cameras and cellphones of those who venture to Door County’s Peninsula State Park.

There is nothing in the country that compares to Eagle Tower. And it’s turning out to be a big draw for the estimated 2 million people that are expected to visit the park near Fish Creek this year.

Yes, it’s 60 feet tall with 100 stairs. But what makes this $3.5 million tower stand out (besides its price tag) is that it’s designed for accessibility and has an 850-foot-long ramp that winds its way gradually up from the parking lot, through the forest canopy and to the tower’s top deck, which sits 253 feet above the bay of Green Bay.

The tower on Eagle Bluff opened this past spring, but on Friday the structure, made from glued, laminated southern pine and planks of cedar, was officially dedicated.

Those in attendance included members of Friends of Peninsula State Park, which contributed $750,000 toward the project, the group’s largest endeavor since forming in 2007. Fundraising included grants from the Knowles-Nelson Stewardship Program and scores of private donations. Some gave just a few pennies, but one person donated $160,000, and a family foundation kicked in $100,000. There were multiple donations of between $40,000 and $50,000, while many others contributed $1,000 each.

“We are absolutely thrilled with how it turned out. It’s a beautiful walk,” said Chris Holicek, president of the Friends group. “People with disabilities have come up to us and said, ‘Thank you. I was sitting at the bottom looking up my whole life.’ And some people who are afraid of heights like it because it’s a gradual way to go up.”

The first Eagle Tower was constructed for $1,061 in 1914 from trees harvested from within the park but was built to be used as a fire watch tower. It even had a telephone line so that fires could be quickly reported. A second similar tower also stood at Sven’s Bluff until 1947, when it was dismantled for safety reasons, according to historical accounts on the Friends’ website.

The first Eagle Tower was dismantled and replaced in 1932, when a 76-foot tower with 108 stairs was constructed. Safety improvements, which included slanting the top deck rails, were made in 1972, and in subsequent years hardware and decking were replaced. But wear forced officials to close the tower in May 2015. The tower was removed a year later, which led to the construction of the new tower, which is now providing unencumbered access.

“The Eagle Tower is a celebration of community and making outdoor recreation opportunities available to anyone, regardless of your ability,” said Diane Brusoe, deputy division administrator for the state Department of Natural Resources’ Fish, Wildlife and Parks Division.

But the tower is only the latest in many improvements at the park, which has 460 highly sought after campsites, a summer theater, an 18-hole golf course, a beach, bike trails and the historic Eagle Bluff Lighthouse constructed in 1868.

The Friends group has been the primary funding source for a $360,000 nature center building scheduled to open later this year. Work on an adjacent 100-seat amphitheater is scheduled to begin after Labor Day and is expected to be ready for the 2022 camping season. The Friends is also in the midst of an $80,000 fundraising campaign to help replace the playground equipment at Nicolet Beach. The project is likely to cost more than $125,000, according to Hyde.

In addition, the state has spent about $15 million in other improvements at the park over the last year. Those projects aren’t as flashy as the new tower but are essential for making a summer camping trip more comfortable and less smelly.

A new shower and restroom facility in the South Nicolet campground has been built along with other restroom upgrades at the South Nicolet and Weborg Point campgrounds. A new sanitary station has been built for those with RVs to dump their waste, there’s a new restroom facility at Northern Sky Theater, and 400 campsites have been resurfaced. In addition, there are new grills and fire rings, 23 campsites have been upgraded to electrical service, and there are new drinking fountains (they’re actually called bubblers) throughout the campgrounds.

Next spring, about 6 miles of park roadway will be repaved. It all comes as park use rose by 30% last year to 1.5 million visitors and is increasing this year to what could be an all-time high.

“Our park gets a lot of use,” Hyde said. “A lot of (projects) were done in the 1970s and a lot of those things are just up all at the same time. There’s been an emphasis on making sure everything is in a quality state.”

Southern Wisconsin could see an inch or more of rain in storms Wednesday night into Thursday, according to forecasters. 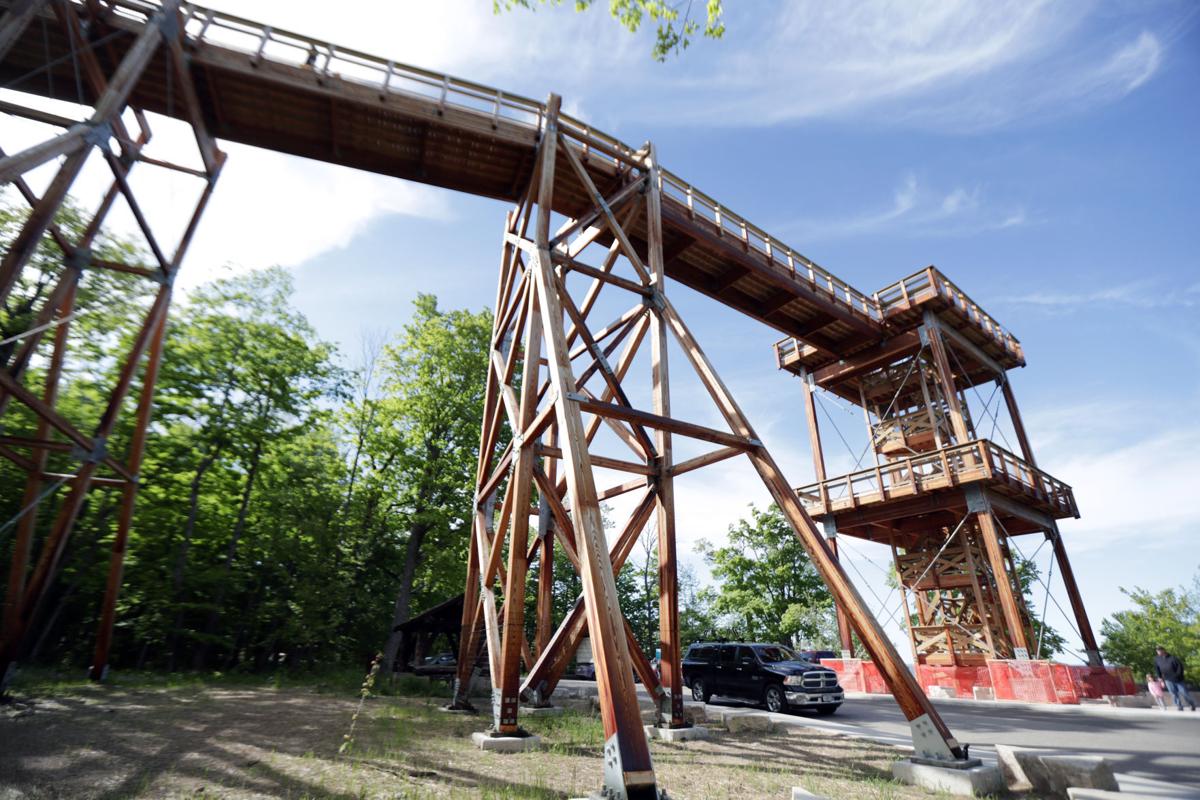 A truck drives below an 850-foot accessible ramp at Eagle Tower in Door County's Peninsula State Park. The $3.5 million tower was dedicated on Friday and is drawing big crowds. 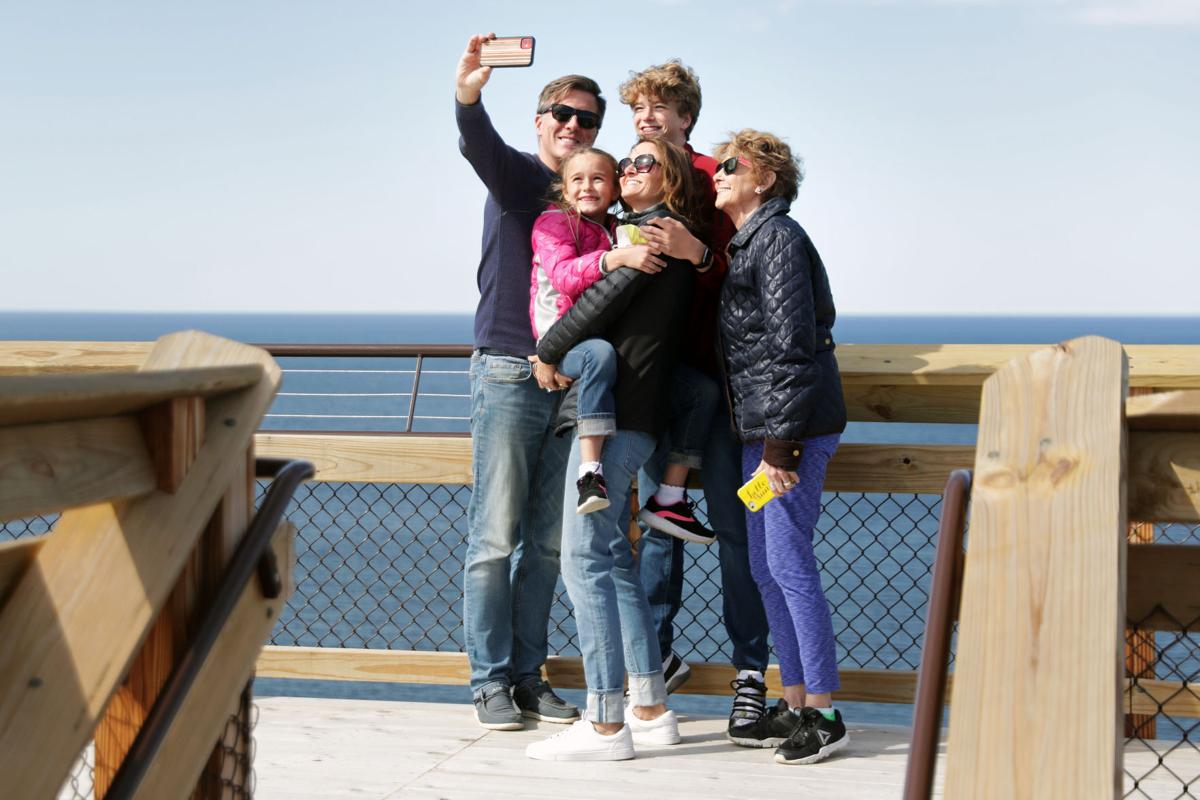 The Lister family of Peoria, Ill. — from left, Jared, Eirlys, Stratton and Amy, along with Pamela Edwards, far right — reach the top of Eagle Tower at Peninsula State Park over the Memorial Day weekend. 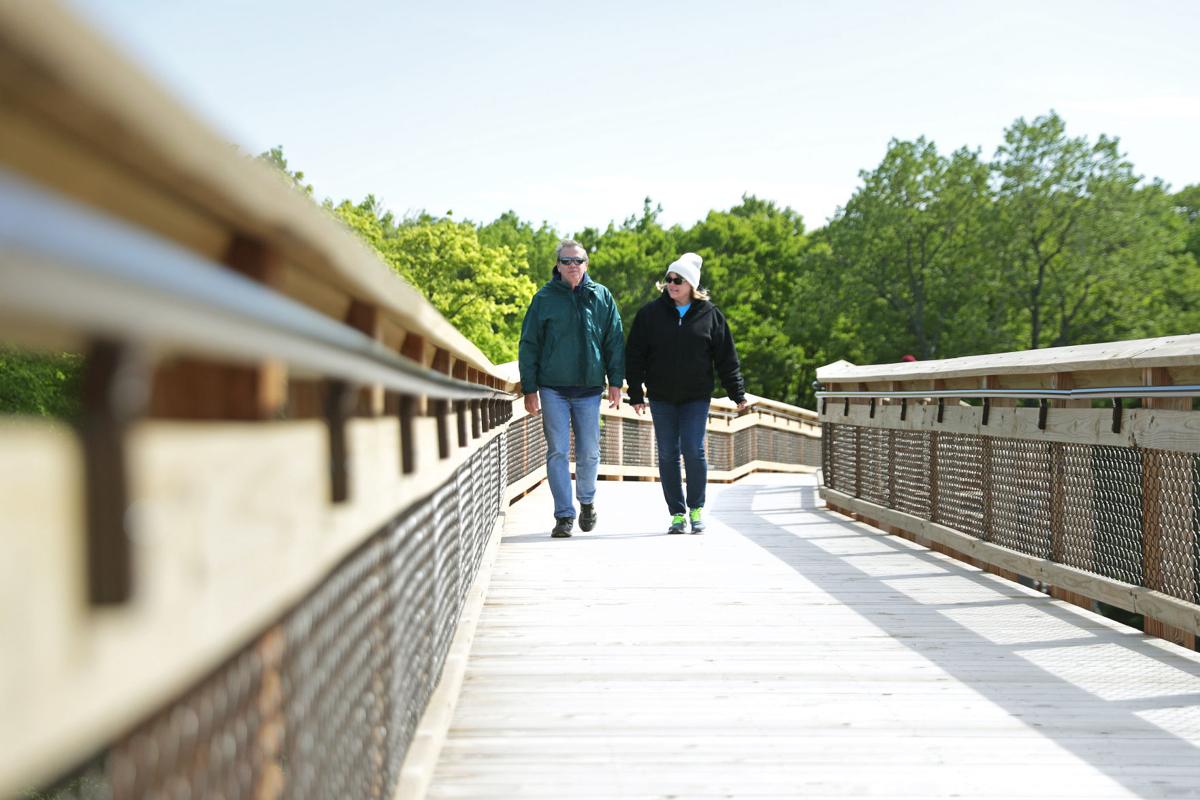 The 850-foot-long ramp of Eagle Tower winds through the forest canopy at Peninsula State Park, making it one of the few fully accessible observation towers in the country. 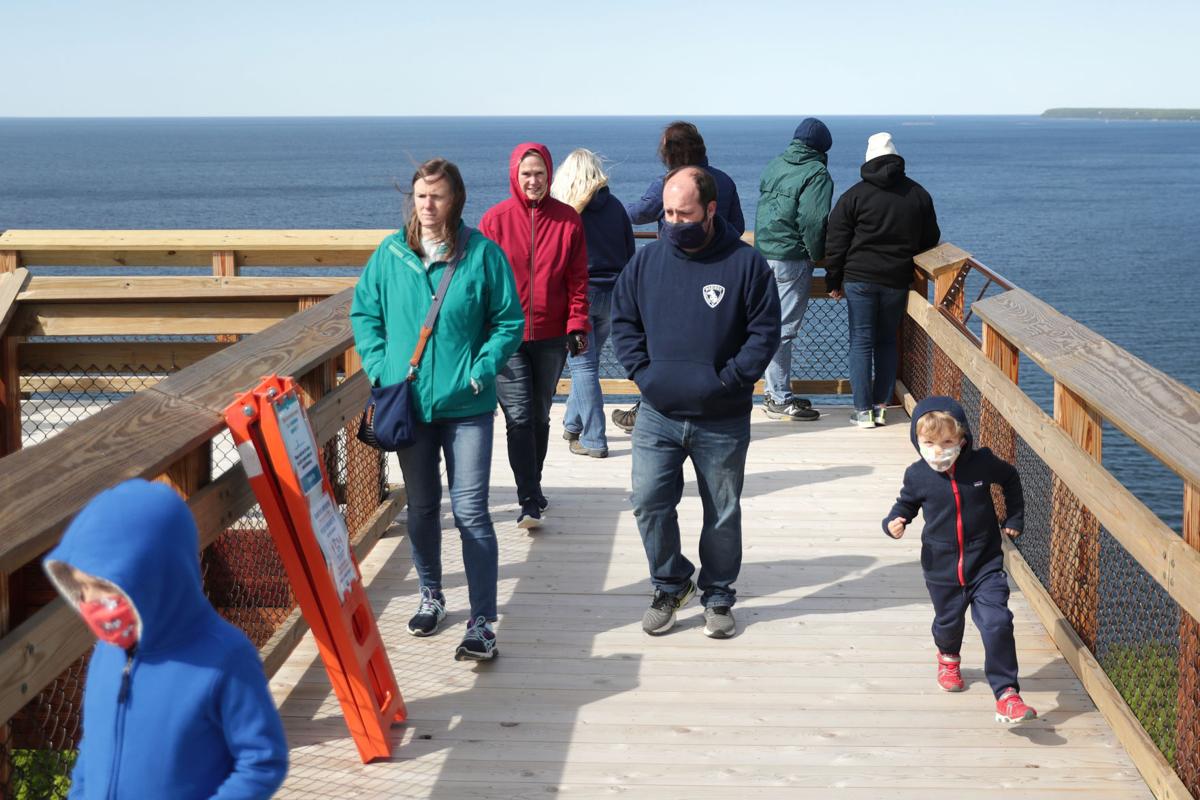 Visitors walk atop the viewing deck of Eagle Tower at Peninsula State Park in Fish Creek. 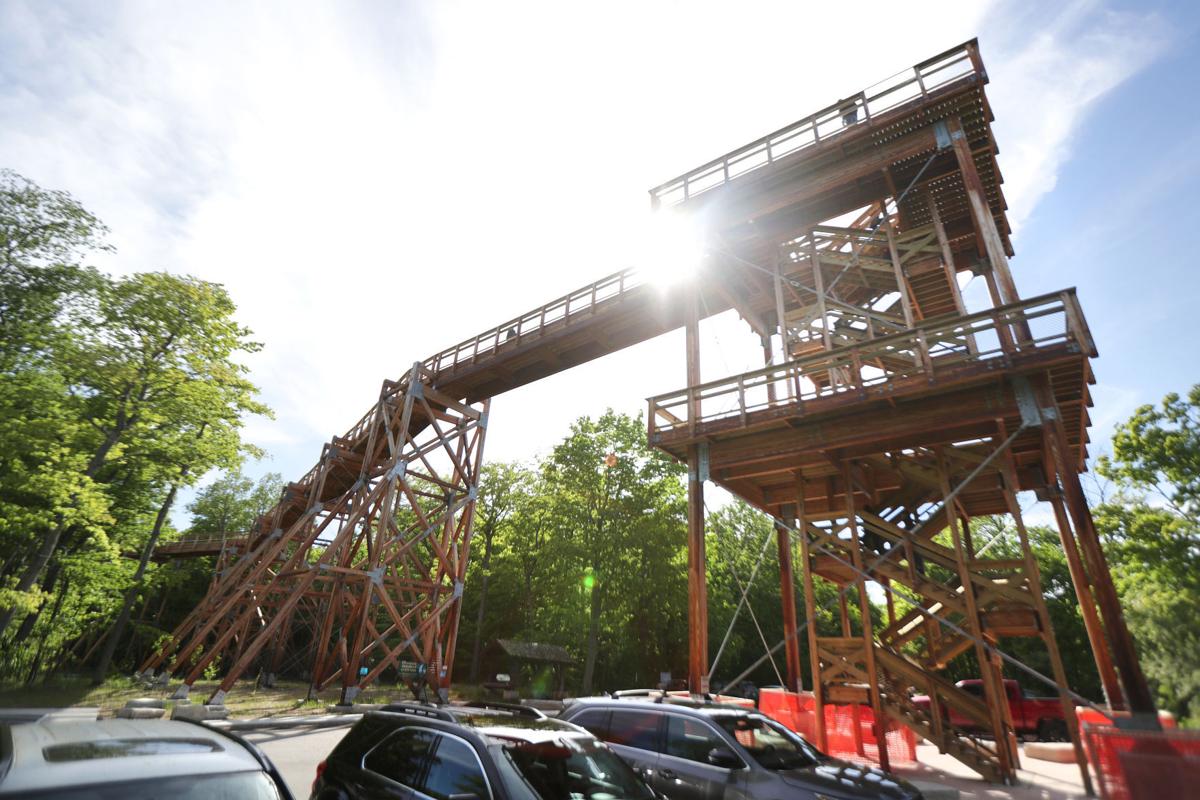 Friends of Peninsula State Park contributed $750,000 toward the $3.5 million project.

This rendering shows the unique design of Eagle Tower, which opened this year at Peninsula State Park in Door County.