MAZOMANIE — Jim Craney has a panoramic view of Lake Marion from the hillside home he built in 1969.

Craney, who spent 38 years in facilities management with UW-Madison and grew up in Mazomanie, can watch the sun rise and bicyclists pedal below on Highway KP and the adjacent half-mile paved trail that opened in 2016 and connects to the village’s downtown.

It’s not uncommon for Craney to spot picnickers, hikers and dog-walkers who trek the lake’s 1.3-mile perimeter while the Mazomanie Music Conservancy hosts concerts at the lake every Tuesday evening in August.

“This is really a heavily used recreational facility,” Craney said. “Every day there are people there.”

But kayaks, canoes, anglers and radio-controlled boats have been absent. The handicap-accessible fishing pier isn’t being used for its intended purpose, either.

Instead, the pier, donated and installed in 1990 by the Wisconsin River Sportsman’s Club and located on the site where Craney’s grandfather operated an icehouse more than 100 years ago, provides a convenient perch to observe part of a saga that, if all goes as planned, could come to an end by this fall.

After years of debate and controversy, no water and failed fixes, Lake Marion is about to become whole again.

A $547,724 project to seal the lake bed from leaks is scheduled to begin in late May or early June. The repair work will allow the lake to be filled to a maximum depth of 10 feet and be stocked with bluegill, crappie and bass, putting an end to its imitation of a prairie.

“It’s going to be a huge relief,” said Peter Huebner, the village’s administrator. “I’m excited about it. I really think we have it figured out this time.”

The lake was instrumental in the early development of Mazomanie and for decades has been key to the social, recreational and economic life of the village, located in northwestern Dane County.

The lake was formed in 1855 as the Milwaukee and Mississippi Railroad laid its tracks and then constructed a dam on Black Earth Creek to supply power for the Lynch and Walker Flouring Mill. In 1885, the village created a municipally operated electric utility which made it possible for Mazomanie to have electric street lights before any of the surrounding villages, including Madison. The power grid also helped the village to grow its manufacturing base that at the time included two flour mills, a creamery, brewery and factories that produced reapers, fanning mills, cabinets, telephones and knitted goods.

In the early 1960s, what is now the state Department of Natural Resources tried to use the lake for fish rearing and ultimately created three distinct segments for raising different-size walleye, northern pike and muskie. But seepage issues that impacted lake levels forced the DNR to abandon the lake as a suitable rearing station, and in 1983 the agency sold the property to the village.

The current problems began for the village in 2007 when the DNR determined that the dam was structurally unsound. The village could have replaced or repaired the dam but in 2010 went with a less-expensive option of abandoning the dam and redirecting the creek, a $400,000 project that was covered by a grant from the state, Huebner said.

But with the creek no longer feeding the lake, seepage issues became more pronounced and the lake continued to lose water. The village tried compacting the soil of the lake bed and spent $204,000 ($125,000 of which came from a 2011 Dane County grant) to install a high-capacity well and pump to fill and maintain lake levels, but the efforts failed and the lake has been unusable.

“If it rains, we might get a puddle in the lake,” Sue Dietzen, the clerk-treasurer for the village of 1,660 people, quipped last week.

The village tried to solicit bids in early 2017 to repair the soil liner of the lake, but only one bid, at over $700,000, was received, a cost too steep for the village. Liner reconstruction was then studied again to reduce the cost and in late 2017, the village rebid the project, received five bids and in January accepted a bid from Krause Excavating in Markesan.

“We have a lot of debt coming off of our books in 2019 so this will get added to it and the taxpayers will be paying the exact amount they were paying before for debt,” Huebner said. “That’s been the goal all along — not to impact the taxpayers.”

The project will use a liquid polymer emulsion from Seepage Control, an Arizona company that specializes in lake and pond repairs. Once vegetation is scraped from the lake bed, the polymer, called ESS-13, will be mixed with the soil and compacted, creating a hard surface designed to prevent seepage. The product, according to the company has been effective on small lakes, lagoons, storm water holding ponds, golf course ponds, fish hatcheries and private water-ski lakes.

“While the product has not been used extensively in the Midwest, it has good success in the western U.S., as well as (in) several projects in the Chicago area,” Brian Berquist, president of Town & Country Engineering in Madison wrote to the village in January.

Past projects to prepare the lake have included laying dead trees that extend from the shoreline into shallow water to provide fish habitat, while two peninsulas have also been created on the lake’s southern end to provide more on-shore fishing spots. A $47,250 fisheries grant from the DNR will help with stocking, the cost of aeration and the creation of spawning beds, although it’s unclear if fish will be added this fall or next spring. There is no boat ramp and motorized boats are not allowed, but plans do call for a new kayak ramp.

“I’ve been patient,” said Craney, who helps lead the Friends of Lake Marion. “It’ll come. It’s unfortunate that it ran into those speed bumps.”

The project will be another improvement to recreational opportunities in this part of the county. When the dam was removed, it marked the first time in more than 150 years that the creek has flowed unobstructed from its headwaters in Middleton to Blue Mounds Creek, which dumps into the Wisconsin River.

Besides the new trail that heads from the lake, under Highway 14 and into downtown Mazomanie, the Wolf Run Trail was completed in 2014. It offers two miles of opportunities from Mazomanie to Wisconsin Heights High School for walkers, bikers and snowmobilers and provides anglers access to the creek, one of the most prized trout waters in southern Wisconsin.

For Bill and Gail Tetrault, the parking lot at the fishing pier of Lake Marion is a perfect spot to start a 40-mile bike ride. The Spring Green couple can bike hundreds of miles in a week and are looking forward to the lake holding water again, which will add to the scenery of the Driftless Area.

For Gail Tetrault, 65, biking is a big part of her lifestyle. She’s trying to log more than 2,200 miles on her bike before the end of the Tour de France on July 29 and is hopeful more than just water returns to the lake.

The public utility is looking at a rate increase, selling unneeded property, pushing back capital projects and other ways to cover a $6 million cash deficit after 2017 revenues were less than expected.

The project, estimated at $1.8 million, would also include shoreline improvements, a tiered seating area, a multi-use path around the river and several beaches.

The minimum order is 75 hamburgers but the great-grandson of Pete Gokey eventually wants to open a food truck in Madison.

The new Eagle tower will include a ramp through forest to allow more to reach its views of Lake Michigan and Door County shoreline.

Sales are comparable to the old store, even though there is half the amount of floor space at the temporary location for the Bargain Nook in Spring. A new building should be done by spring after the store was destroyed nearly a year ago by fire.

A 37-year-old man riding a snowmobile in northern Wisconsin died in an alcohol-involved crash over the weekend, authorities reported. 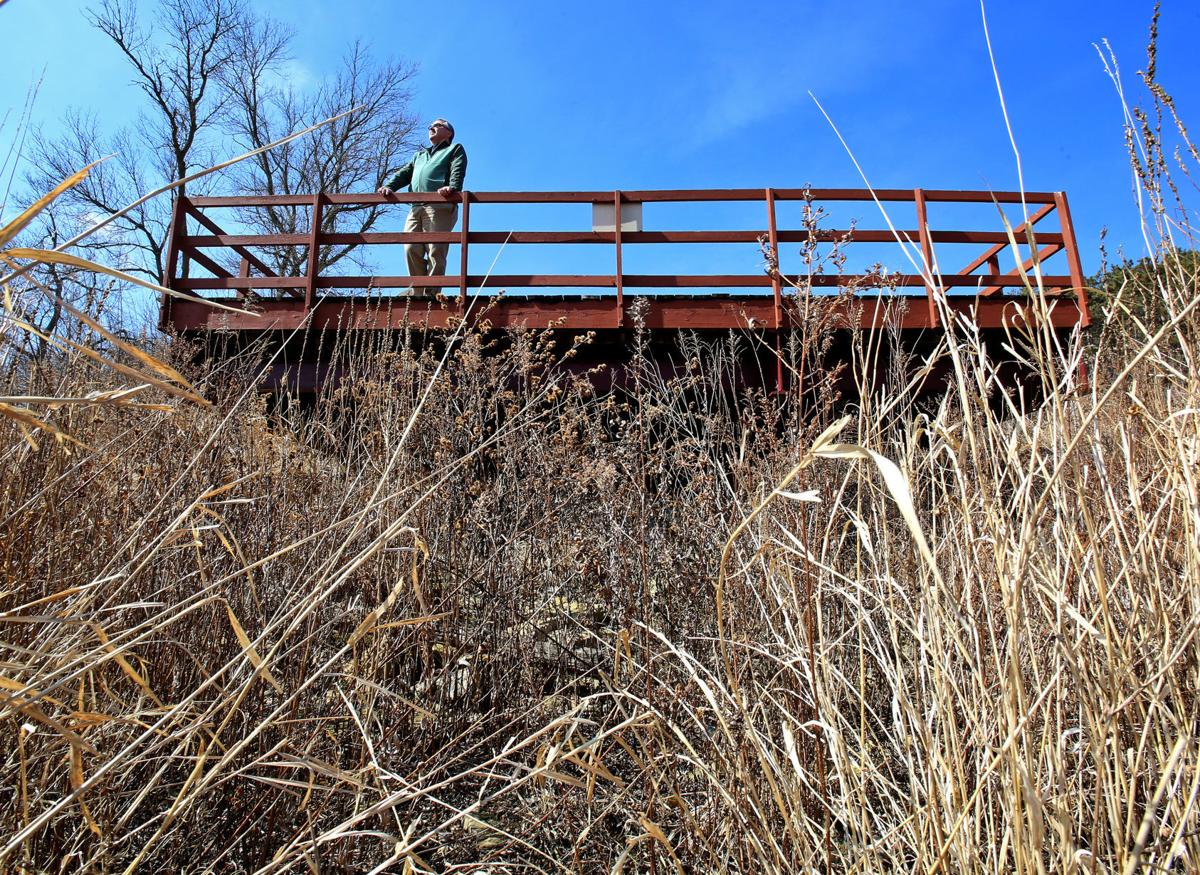 Peter Huebner, administrator for the village of Mazomanie, looks over the dry lake bed of Lake Marion from a fishing pier on Highway KP.  The village has approved a $547,724 project to repair the leaking lake, a project that could be competed by September and end years of problems. Plans call for restocking the 17-acre lake with fish, adding aeration and a kayak ramp. 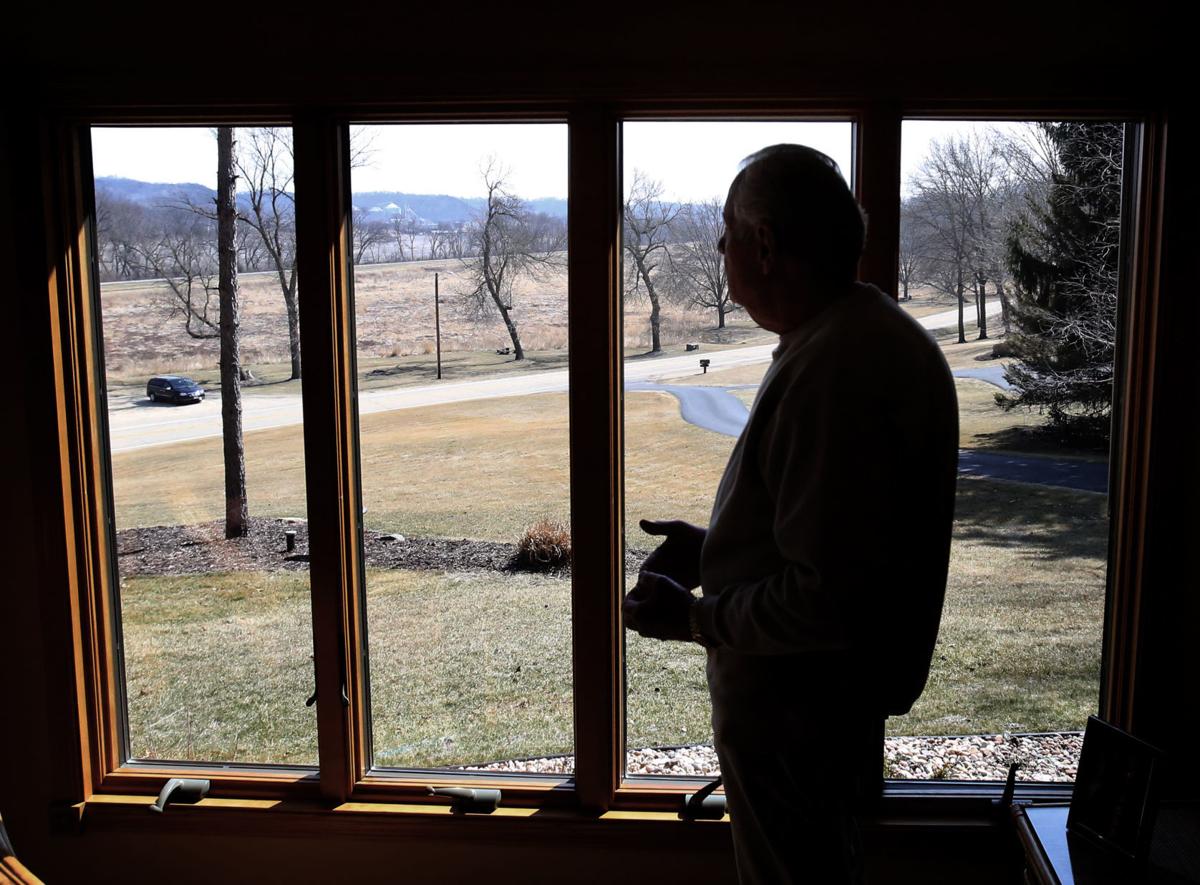 Jim Craney looks out the window of his sun room at the dry lake bed of Lake Marion. Craney is a member of the Friends of Lake Marion and built his house on a hill across the road from the lake in 1969. When Black Earth Creek was diverted around the dam that funneled water into Lake Marion, the lake failed to hold its existing water. Attempts to fill the lake with water from a high capacity well also failed. 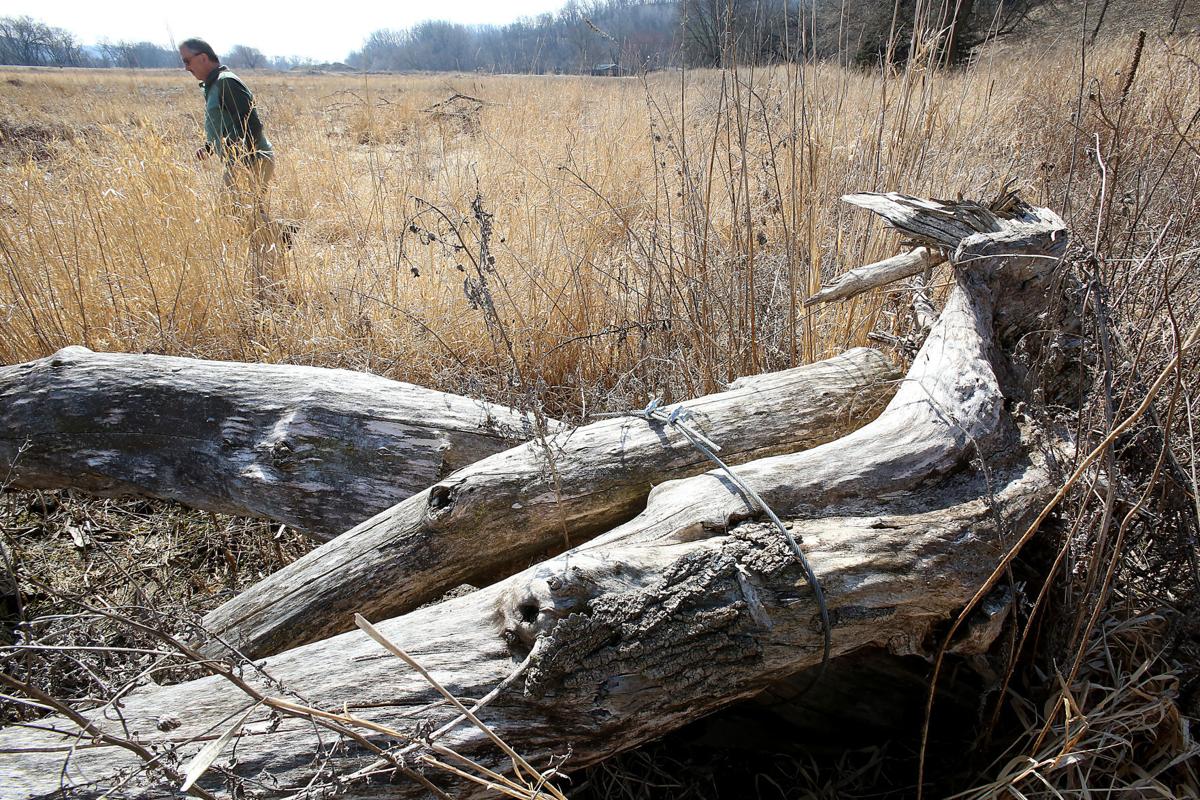 Peter Huebner, administrator for the village of Mazomanie, walks through the tall weeds in the dry lake bed of Lake Marion last week. In the foreground is one of 13 dead trees anchored to the ground to provide cover for fish. The trees will be removed prior to the repair of the lake and then reinstalled. 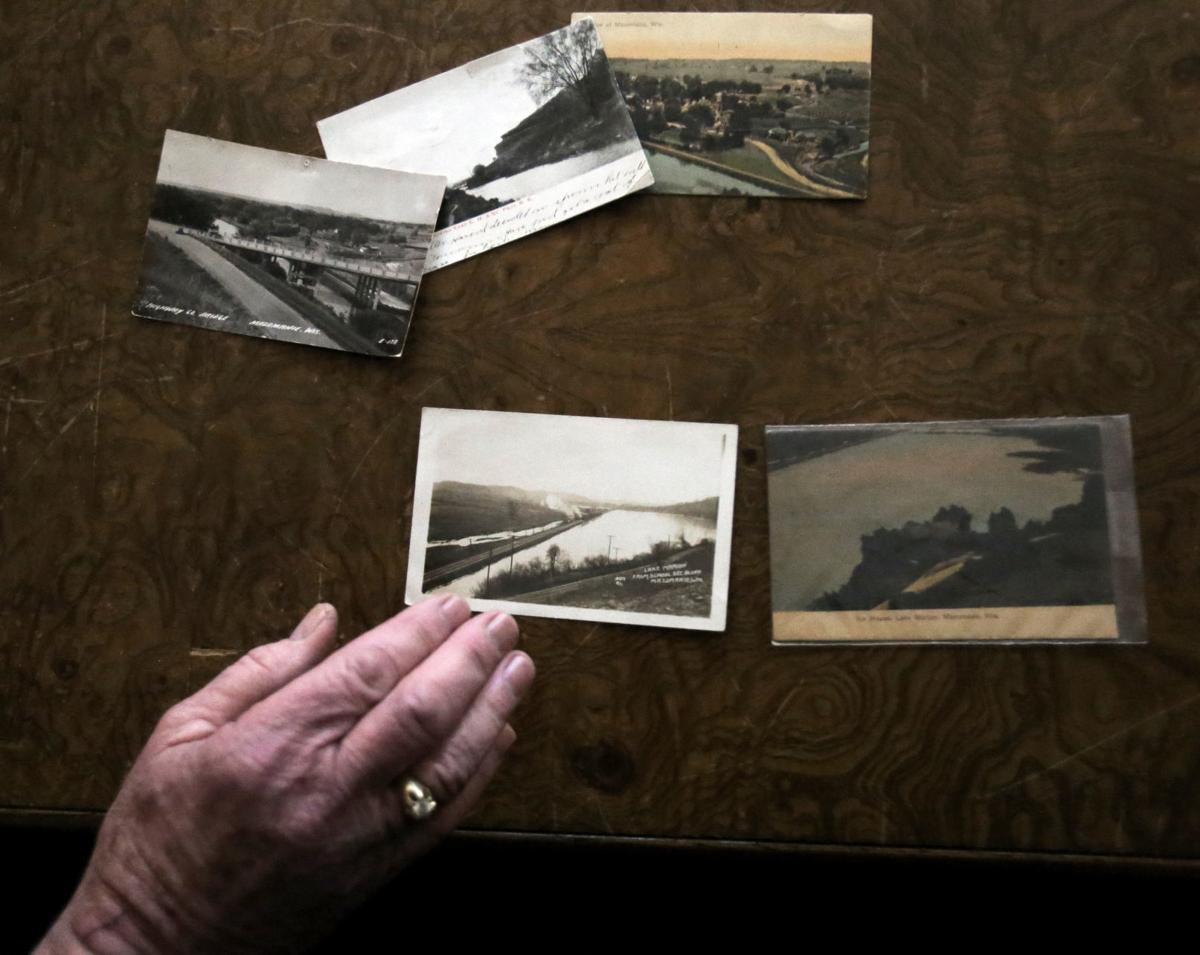 Jim Craney, a lifelong resident of Mazomanie who has lived across the road from Lake Marion since 1969, shows off postcards with historic images of the lake that was formed in 1855 when a railroad company built a dam on Black Earth Creek to power a flour mill. 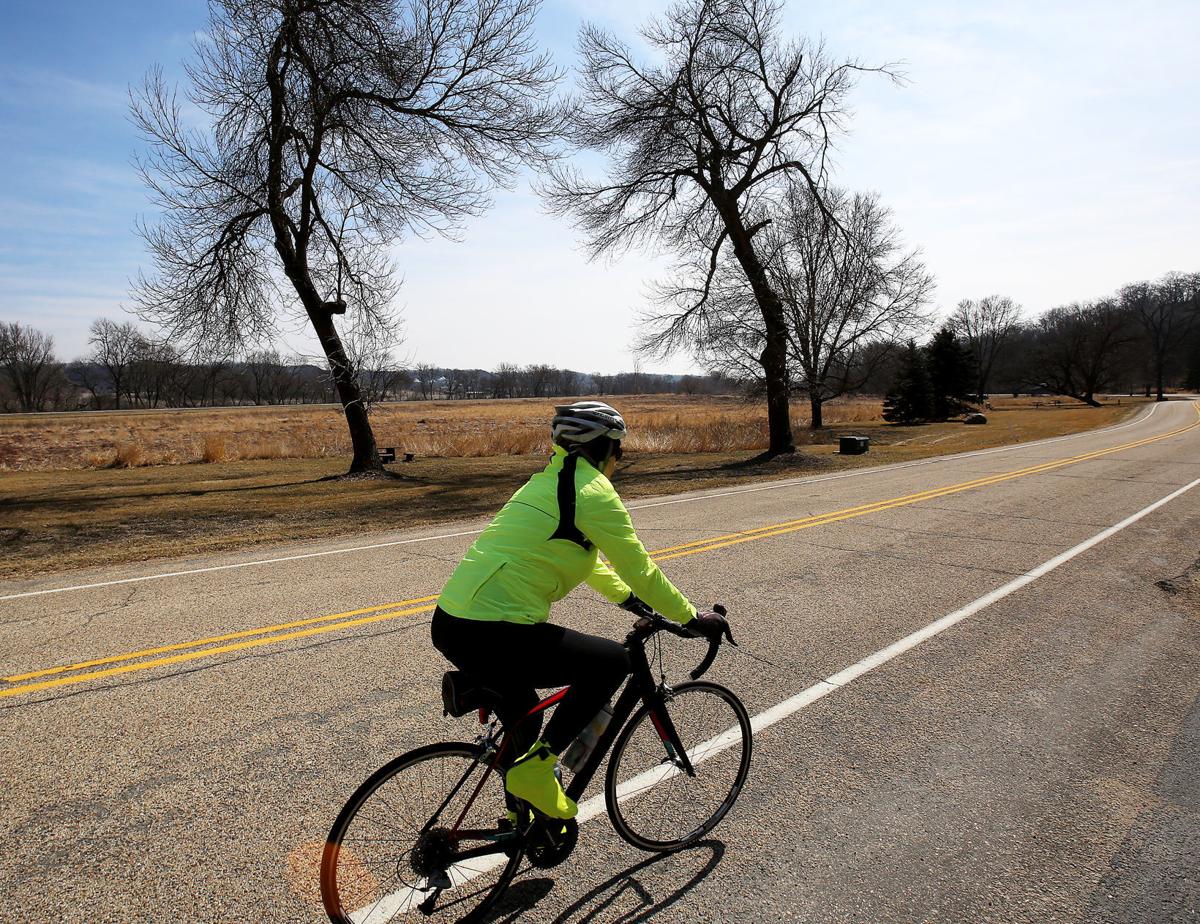 Gail Tetrault, 65, of Spring Green, makes her way along Highway KP, which runs adjacent to Lake Marion in Mazomanie. Tetrault was biking with her husband, Bill, and just beginning a 40-mile ride. The couple is looking forward to a more scenic ride once the lake regains its water. 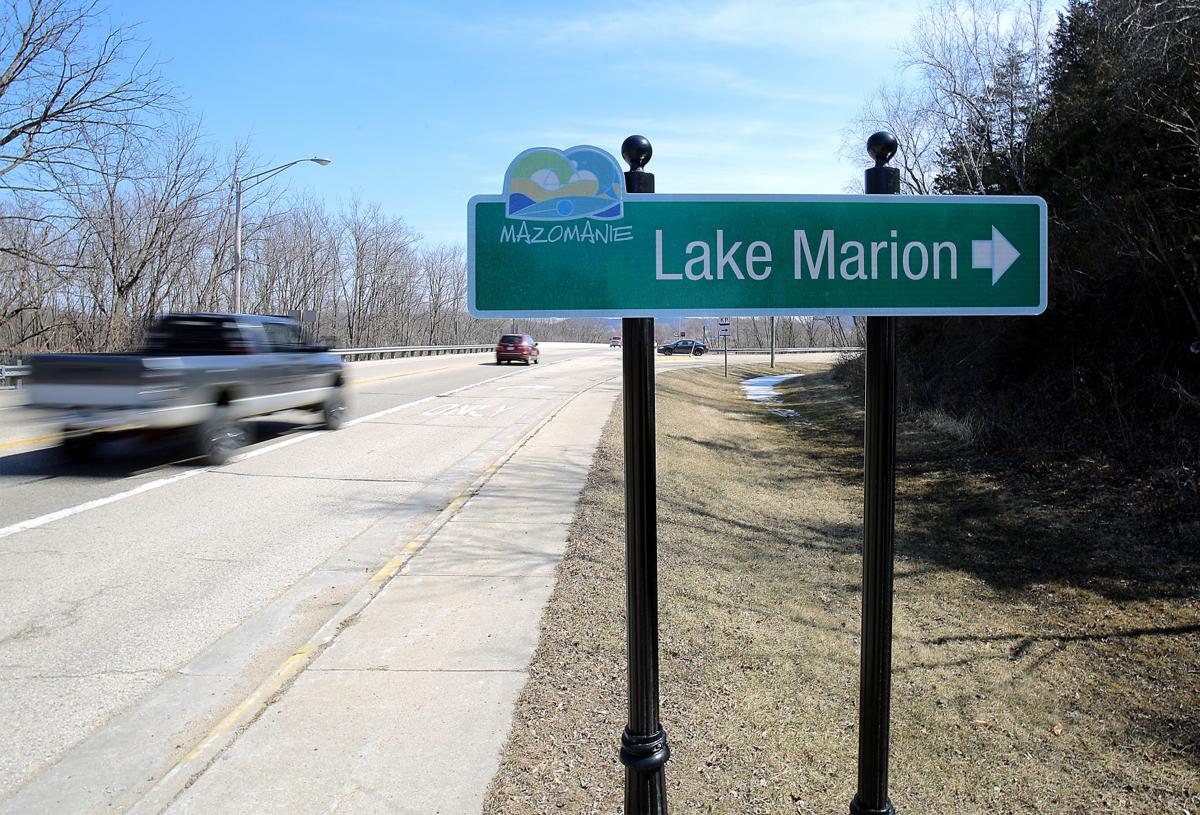 A highway sign for Lake Marion directs travelers to the recreational area in Mazomanie. 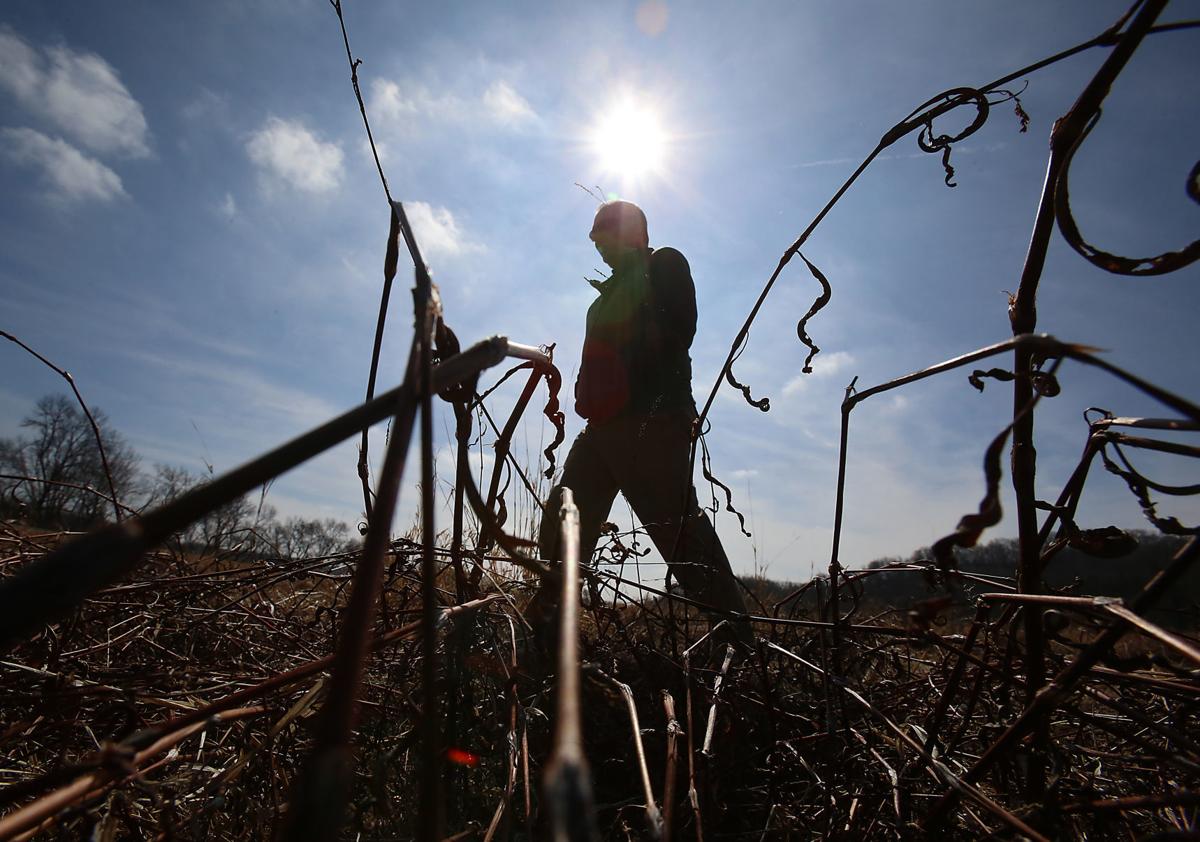 Peter Huebner, administrator for the village of Mazomanie, appears to be walking through a prairie but is actually on the dry lake bed of Lake Marion. Huebner and other village officials are hoping repairs to the lake this summer will bring water, fish and more users to the lake. 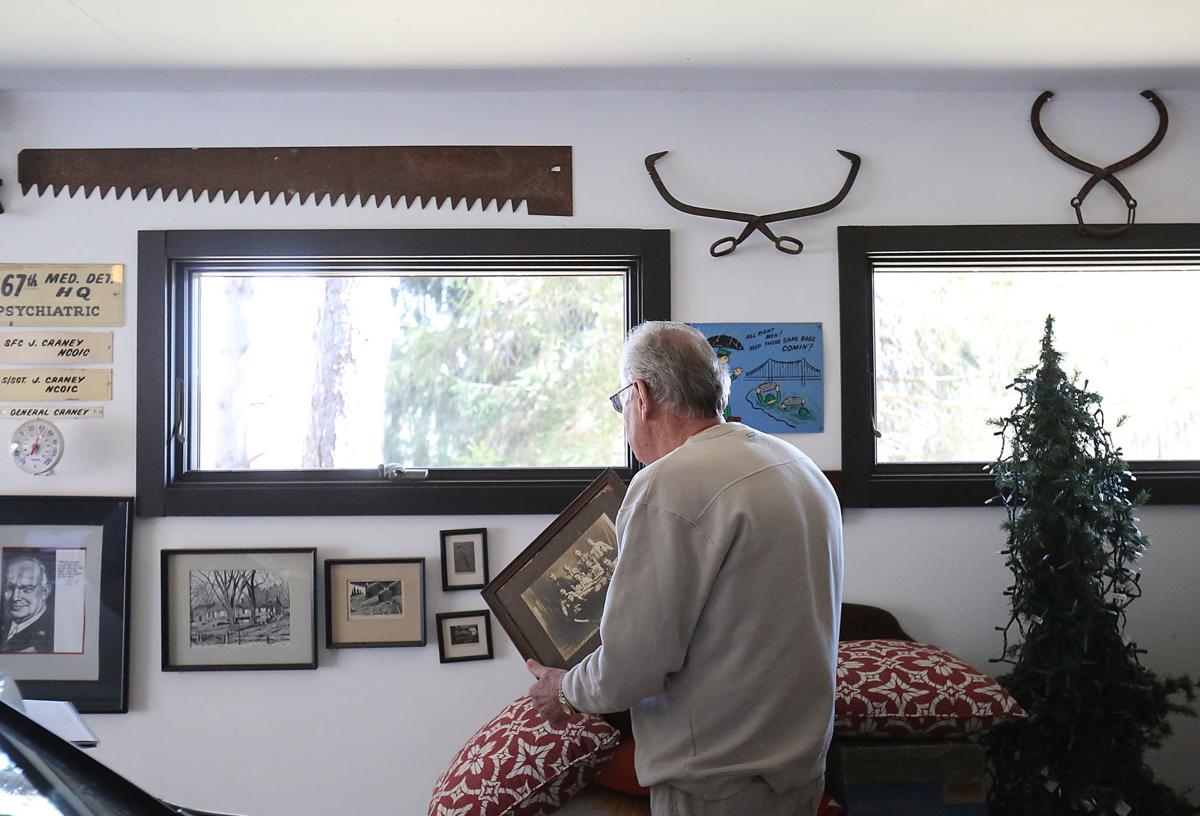 Jim Craney looks over family artifacts neatly displayed in his garage across the road from Lake Marion. Craney's grandfather, William Craney, operated an ice house on the lake and some of his tools, including a saw and tongs, hang in the garage. 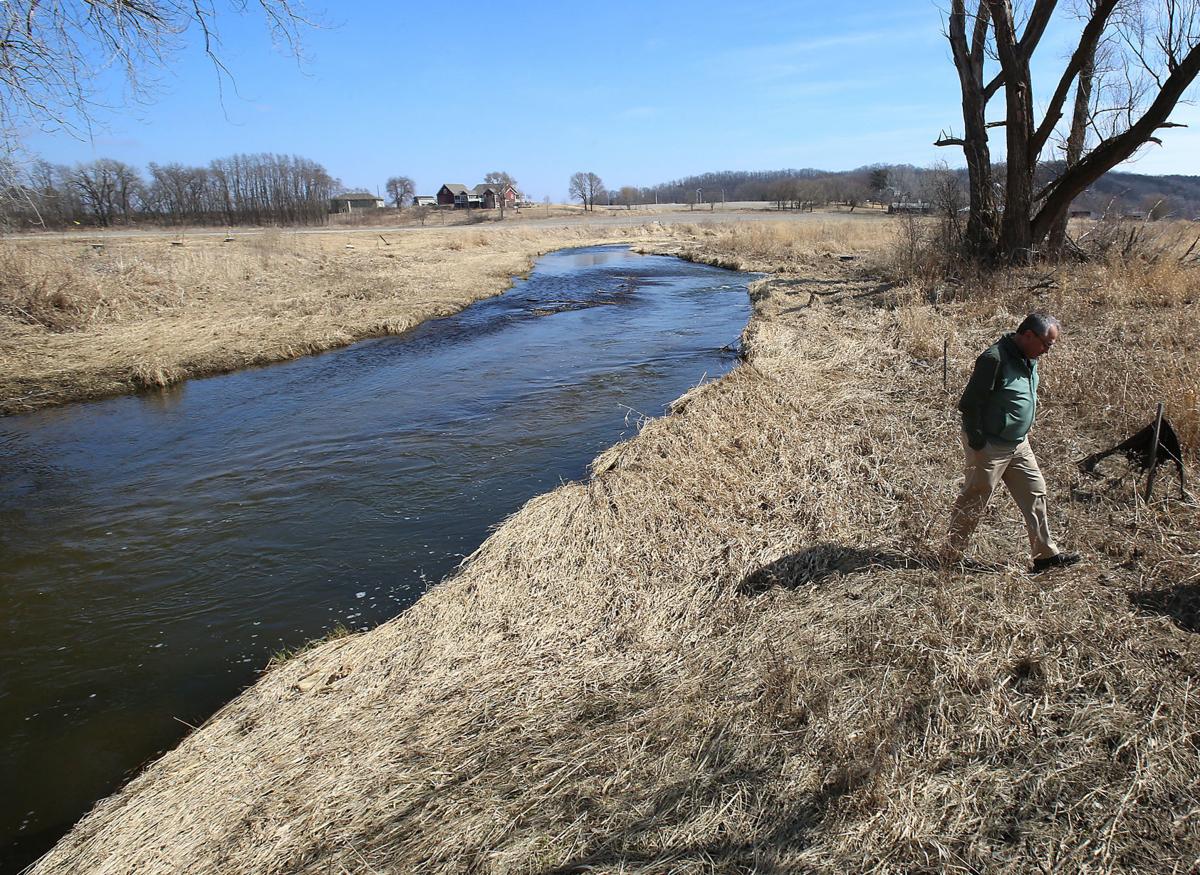 Black Earth Creek had for decades been the source of water for Lake Marion but in 2010 the creek was diverted around a dam that helped create the lake. 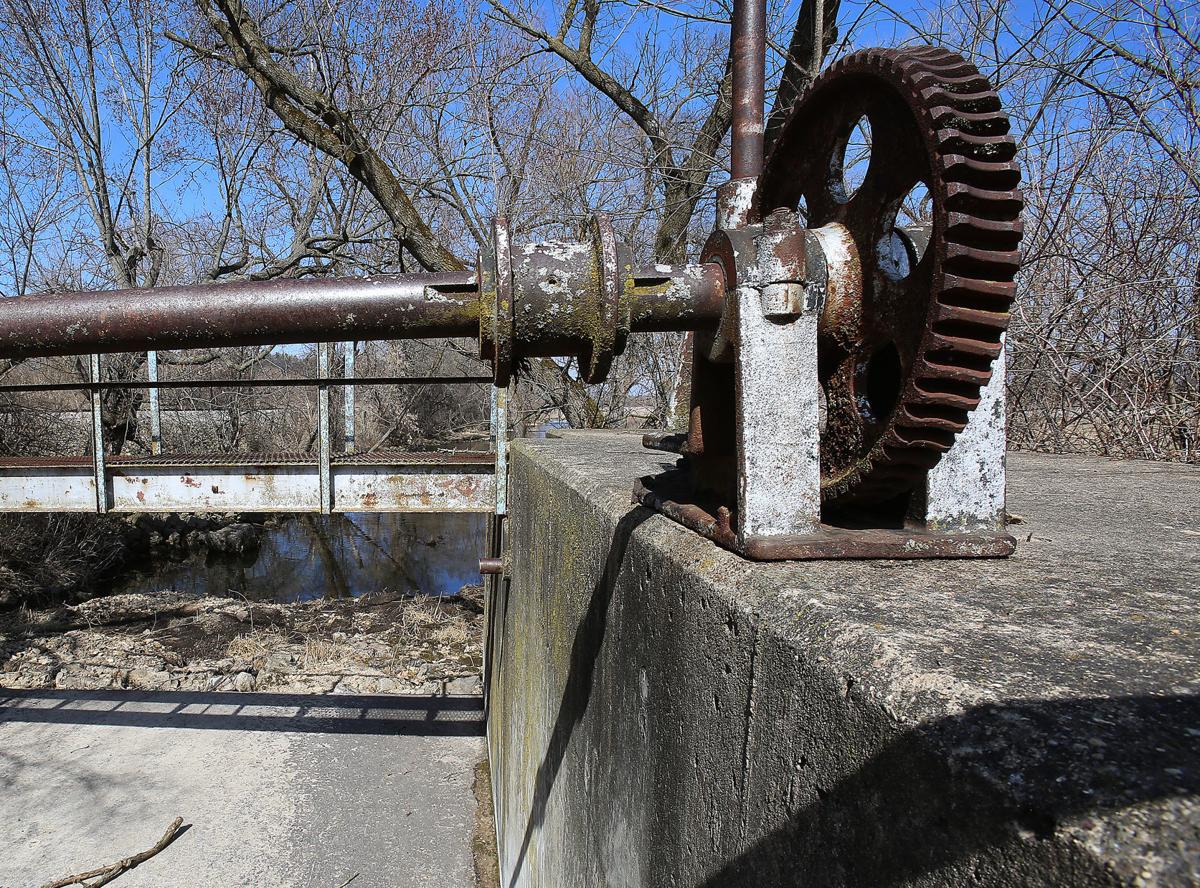 Remnants of a dam that once controlled the level of Lake Marion is now idle near Black Earth Creek. The original dam was constructed in 1855.