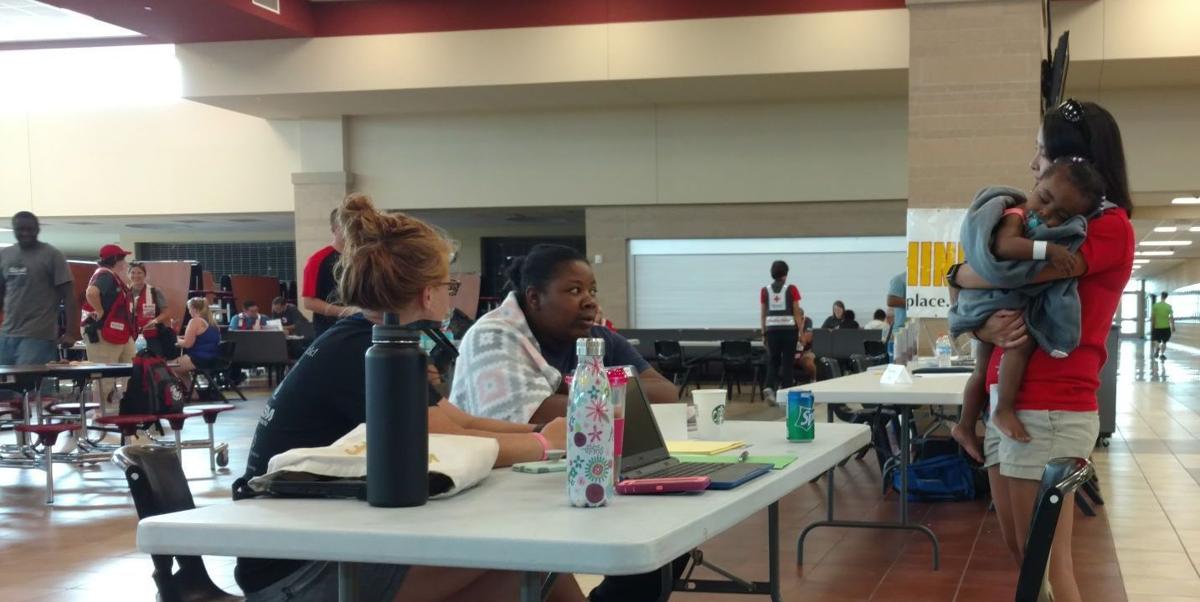 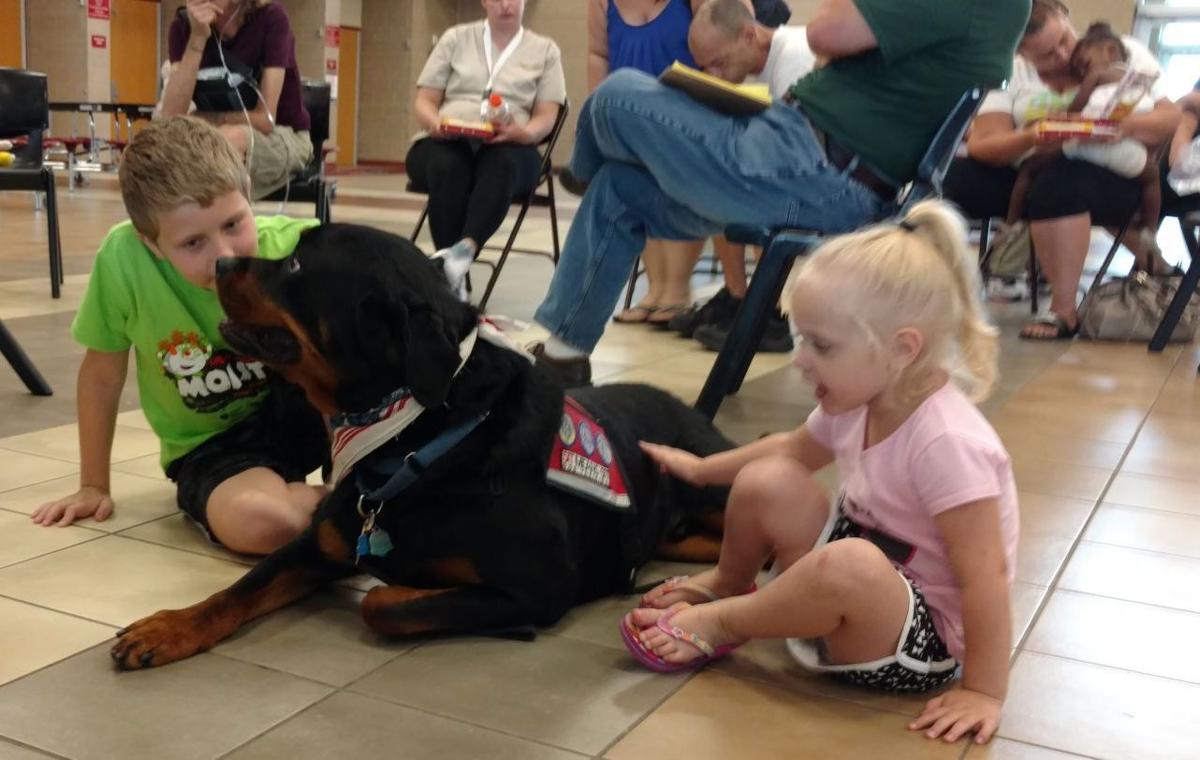 Xander Hall, 11, left, and Darla Lou Hall, 2, pet Go Team therapy dog Max, a rottweiler, Friday at Sun Prairie High School. The youngsters' parents were at the school to learn about when they might be allowed back into their apartment, which was near Tuesday's explosion and fire in Sun Prairie, and to get help finding housing in the meantime. 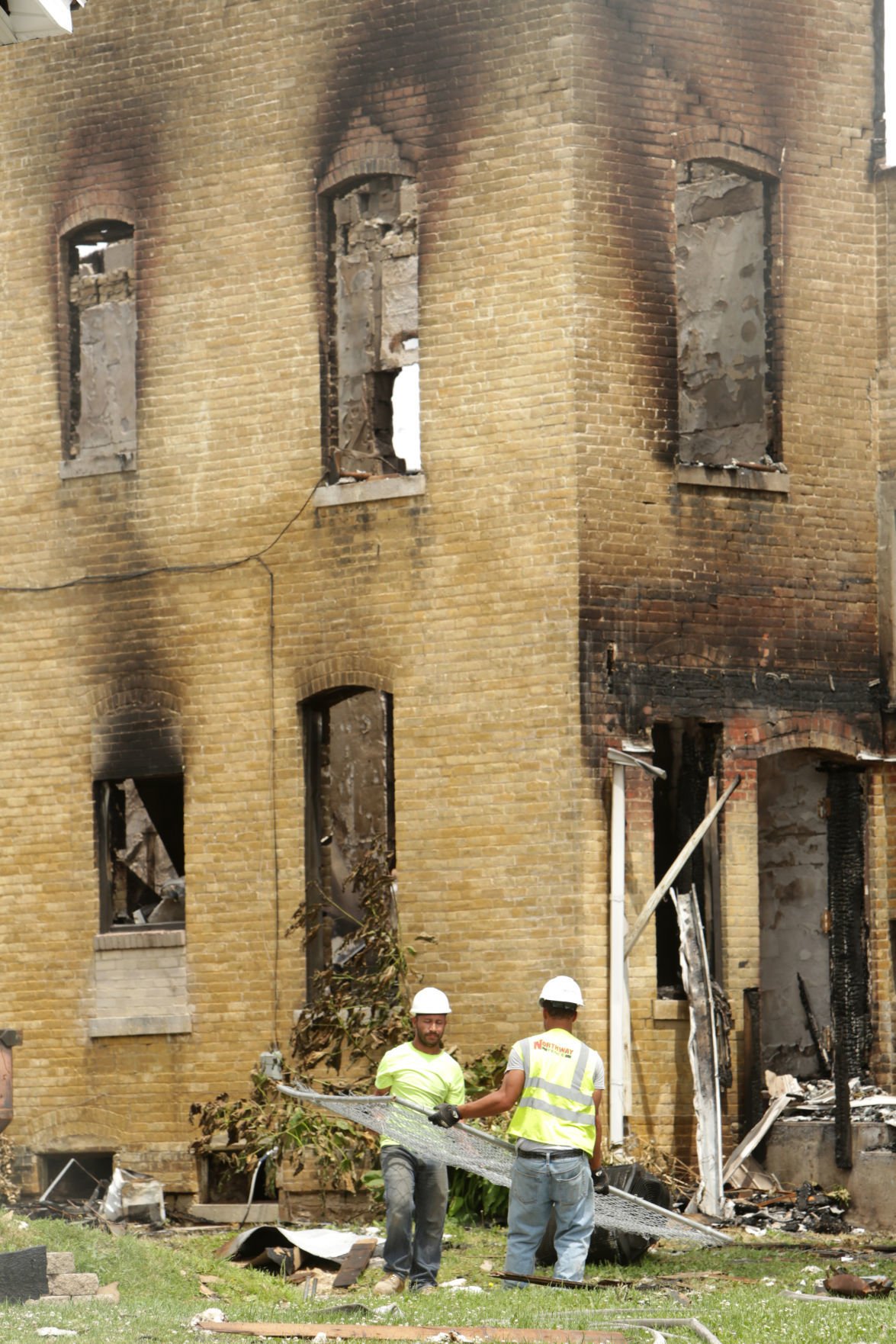 Workers put up temporary fencing Thursday around the immediate blast zone in downtown Sun Prairie. The American Red Cross estimates that about two dozen residences have been destroyed or are uninhabitable within the immediate area of the natural gas explosion.

SUN PRAIRIE — After a few years of homelessness, Kenya Johnson and her young daughter were happy to be living in an apartment in downtown Sun Prairie.

But after Tuesday’s explosion and ensuing fire in the city, that apartment — which she shared with her sister and her three kids — doesn’t exist, leaving Johnson without a home just a few months after finding a stable situation.

Johnson and her 18-month-old daughter are among an unknown number of Sun Prairie residents left without a home or temporarily displaced after the blast that leveled several buildings and damaged others.

Authorities have said the explosion and fire resulted from a ruptured natural gas line. It destroyed the Barr House restaurant and bar, which Barr owned with his wife, Abby. Four other buildings were destroyed or significantly damaged.

As Sun Prairie continues to mourn Barr, those displaced — some of whom lost all of their belongings and have been staying in motels, their vehicles or with family — must figure out what comes next.

Aid agencies have scrambled to provide short-term help and are working to help those displaced connect with services and find housing, while community members have helped by donating food, money, water, basic necessities and clothing.

Among the services offered were helping people with finding housing and filing insurance claims. They could also speak with a social worker or mental health professional.

At the center, people picked up basic necessities, such as diapers and shampoo, and gift cards for foods and clothing, while children petted a 94-pound Rottweiler therapy dog named Max.

Others ate snacks or free pizza cooked by a food truck from Kentucky.

It’s unclear how many residents have been displaced, but the Red Cross estimated that about two dozen residences have been destroyed or are uninhabitable within the immediate blast area, said Brenda Haney, a Red Cross volunteer working as a damage assessor and case manager.

That doesn’t include other residents near the blast site who may not be back in their damaged homes because they are waiting for repairs or to be cleared for occupancy by an inspector or engineer.

Inquiring about volunteering or donating money or food has been helpful, but those who still want to assist could help just by patronizing Sun Prairie businesses, many of which have been providing food and other goods or services to those affected by the explosion, Haney said.

“Come to Sun Prairie. Eat at its restaurants and come to the coffee shops,” she said. “These people have been giving back.”

Sun Prairie native Kaila Schmidt was at the relief center looking for help figuring what to do after her apartment on the same block as the Barr House was leveled by the explosion.

In the meantime, Schmidt said she has been staying with her mom.

Destroyed in the fire and explosion were belongings such as clothing and furniture. While Schmidt said she can replace those items, the worst part of losing her home was the destruction of mementos — such as pictures of her son, who was born premature and died a week and a half later — and a hope chest that belonged to a grandfather who died recently.

“That stuff I can never replace,” she said. “It’s completely gone now.”

Although their apartment above the China Garden, about a block from the Barr House, wasn’t destroyed, Jamie Hall and Megan Maier aren’t sure when they’ll be allowed back in.

At the resource center, Hall said he has been allowed to go back and inspect the apartment and grab a few small items. He said the apartment was damaged and smells like smoke but after some cleaning it will be inhabitable again.

Since the explosion, they’ve slept in their car and stayed in motels with their 2-year-old daughter, Darla Lou, and Hall’s 11-year-old son, Xander.

The four were at the center hoping to find out when they’ll be allowed back into their apartment and for housing assistance until then.

For Johnson, losing the apartment, which was above Glass Nickel Pizza, along with her belongings is worse than not having a home. When she was homeless, Johnson said, she at least had her belongings.

“Being homeless is harsh,” she said. “This is worse. We are starting over with nothing.”

On Friday, as the investigation of the explosion continued, contractors and utility workers continued checking the integrity of buildings and cleaning up broken glass and rubble around the approximately one-block epicenter of the blast, as onlookers took pictures of the destruction and spoke with others.

Although it’s unclear when the area where Main Street intersects with Columbus and North Bristol Streets will open again, business owners and residents are allowed to access their property if escorted. Those wishing to see their homes or businesses are asked to meet first responders at the corner of Columbus Street and Angell Street, the Sun Prairie Police Department said.

Sun Prairie Mayor Paul Esser said it’s too early to start talking about clean-up timelines and next steps until after Barr’s funeral services on Saturday.

Fire companies from across the country are expected to be in attendance to pay tribute to Barr.

Xander Hall, 11, left, and Darla Lou Hall, 2, pet Go Team therapy dog Max, a rottweiler, Friday at Sun Prairie High School. The youngsters' parents were at the school to learn about when they might be allowed back into their apartment, which was near Tuesday's explosion and fire in Sun Prairie, and to get help finding housing in the meantime.

Workers put up temporary fencing Thursday around the immediate blast zone in downtown Sun Prairie. The American Red Cross estimates that about two dozen residences have been destroyed or are uninhabitable within the immediate area of the natural gas explosion.