His tenacity over the last four decades helped grow the sport that next weekend will bring thousands of people to the state’s largest inland lake to set up a shack, sit in the dark and, for hours on end and oftentimes days, stare down an opening made with a chain saw.

Casper was just 8 years old in 1939 when he tagged along with an uncle who after only a few hours speared a 104-pound sturgeon. It was Casper’s first trip to a spearing shack and helped transform the farm boy into a sturgeon fanatic and, later in life, lead him to create Sturgeon for Tomorrow.

Founded in 1977, the advocacy group, as of this year, will have donated $1 million to the state Department of Natural Resources for sturgeon research, management and education.

The combined efforts are a big reason why the 12,962 people who have purchased sturgeon tags for this year’s season — which begins at 7 a.m. Saturday on lakes Winnebago, Poygan, Butte des Morts and Winneconne — will have a reasonable shot at a fish of a lifetime.

“I was worried about the lake. We were getting short of sturgeon and people were violating so terribly on that Wolf River,” Casper said last week as he recalled the founding of SFT. “If I maybe would have gone with (my uncle) for a whole month, which happens, and you don’t see a fish, I probably wouldn’t have bothered with all of this.”

Lake Winnebago and the Upriver System of lakes supports one of the largest self-sustaining stocks of lake sturgeon in the world. The fish can be over 100 years old, top 200 pounds and be elusive as they scour the lake bottom for gizzard shad and red worms.

The 16-day season is dependent on ice conditions and water clarity. Cloudy water leads to lower harvest numbers, while clear water can mean a banner year and close the season early once harvest caps are met.

This year, for example, Lake Winnebago has a harvest cap of 344 juvenile females, 855 adult females and 976 adult males.

At Wendt’s on the Lake along Highway 45 in Van Dyne on the lake’s western shore, only 82 fish were registered in 2016, compared to 269 the previous year. Poor water quality was to blame, said Ryan Koenigs, a sturgeon biologist for the DNR.

“Ice conditions were good to start off the season, but deteriorated as the season went on due to rain and warm weather,” Koenigs said last week. “Some spearing shacks may be out on the lake already, but the big push will (be now) through next Friday.”

On Thursday, Shawn Wendt was tending bar at his family’s supper club while other family and friends staged the 35 fully equipped and heated ice shacks the family rents out at $175 a day to those without their own gear.

Wendt, a guide, has clients from all over the state and this year from Florida, Colorado and New York. This week, shacks will be moved into fishing spots based on water clarity.

“There will be a lot of guys out checking water clarity and trying to find red worms and the shad,” said Wendt, 47. “We set up everything. All they have to bring is their food and drink. We cut the hole, we’ve got the spear, the gaff hook, the decoy, the heat. The heat’s on when they get out there.”

Hundreds of old Christmas trees mark ice roads. Fishing clubs and SFT chapters hold raffles to pay for 60-foot-long temporary metal bridges that can cost up to $14,000 apiece but are used to help vehicles traverse expansion cracks in the ice. A SFT banquet in Keil last weekend drew 500 people and a similar crowd was expected for a SFT event in Appleton.

Scott Venne, 60, of Fond du Lac, joined Sturgeon for Tomorrow when it was founded and has been spearing for decades. He and nine others have eight shanties and plan to fish in 16 feet of water three to four miles out off of Pipe, on Lake Winnebago’s eastern shore. Conditions, however, could push them to fishing spots near Brothertown or Stockbridge to the north.

“You have to follow the clear water,” Venne said as he nursed a Miller Lite at Wendt’s. “There’s a lot more people doing it now than in the ’70s. Years ago not too many people knew about it but now there’s a lot of hype.”

Festivities this year include the second annual Sturgeon Spectacular based in Fond du Lac.

The event, held in conjunction with the Winnebago Association of Kiteboarder’s 28th annual Sturgeon Stampede, will include tetherball and ice bowling tournaments, a fat tire bike race, music, snowman building, a chili crawl and three performances of “Guys on Ice” on the ice in a heated tent. On Saturday night, a large cardboard sturgeon will be burned in effigy as part of a bonfire.

Culturally, sturgeon spearing is like deer hunting, although it’s contained to a finite geographic area of the state. The seasons can be of similar length, shacks replace tree stands, until this year there were metal tags and, yes, there are sturgeon camps.

Mary Lou and Vic Schneider’s garage and workshop along Highway 151 is decorated with photos of past seasons, spearing equipment, decoys and carvings of sturgeon. An eyebolt in the ceiling is used for hanging fish.

Crowds of family and friends can fill the garage.

“Sometimes it’s standing-room-only in here,” said Mary Lou, 83, an expert wood carver and decoy maker who in 1967 speared a 107-pound sturgeon. “The fish don’t taste as good as they used to because now they’re eating shad. They’re really oily.”

The Schneiders live on the family farm on which Mary Lou was born. Her brother is Bill Casper, who lives down the hill on Blue Gill Drive, has a trout pond and a 37-foot houseboat he uses to chase walleye and perch during the open water season. His hard water exploits are focused on sturgeon, although he has not surpassed the 100-pound mark like his sister.

Casper, who speared his first fish in 1945 and is retired from Giddings & Lewis, a Fond du Lac machine tool company, has been featured in books, documentaries, television shows, newspapers and, in 1996, the pages of Sports Illustrated.

When the state celebrated its sesquicentennial in 1998, Casper was invited to Washington, D.C., where, on the National Mall, he set up his shack that resembles a Green Bay Packers helmet and educated skeptical visitors.

Casper’s shanty, one of his spears, several decoys and documents and memorabilia from the initial days of SFT have been donated to the Wisconsin Historical Society. Casper plays the organ in his family room every day, collects fossils, arrowheads and meteorites, has built a Par-3 golf course and has just started reading “Death and Life of the Great Lakes” by Dan Egan, a reporter for the Milwaukee Journal Sentinel. The book looks at the health of the lakes, the construction of the St. Lawrence Seaway and the arrival of invasive species.

Not surprisingly, the book resonates with Casper, who has spent his life trying to protect a fish as old as the Great Lakes themselves.

“I didn’t know where the hell it was going,” Casper said when asked about forming SFT and its success. “I always imagine it like a one-man band marching down the street banging on a drum trying to make a tune and a big band shows up behind him. It just so happened it turned out.”

Barry Adams covers regional news for the Wisconsin State Journal. Send him ideas for On Wisconsin at 608-252-6148 or by email at

But a long-term solution isn't in fees, because hunting popularity is plummeting, the DNR said in a report lawmakers mandated.

During this winter’s spearing season, which ran eight days from Feb. 14 to 21 before reaching its quota, spearers registered 2,158 fish. Winnebago’s harvest was the lake’s sixth highest kill recorded from 1940 to 2015.

Cloudy water has limited visibility for the sturgeon spearing season but some still find success. 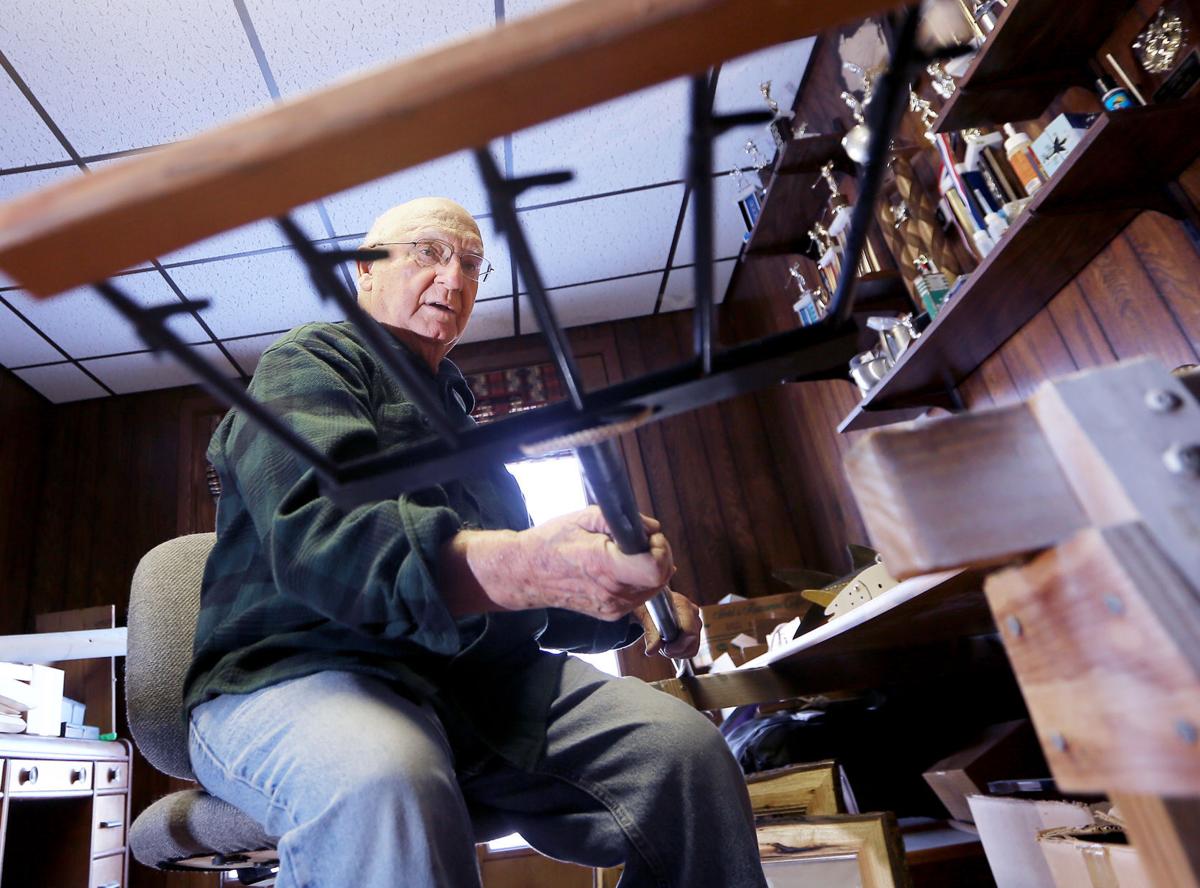 Bill Casper, 86, of Fond du Lac, shows off the spear he will use next weekend when the sturgeon spearing season opens on the Lake Winnebago System of lakes. Casper was introduced to the sport in 1939, got his first fish in 1945 and in 1977 started Sturgeon for Tomorrow. Over 12,000 people have purchased licenses for the 16-day season that starts Saturday. 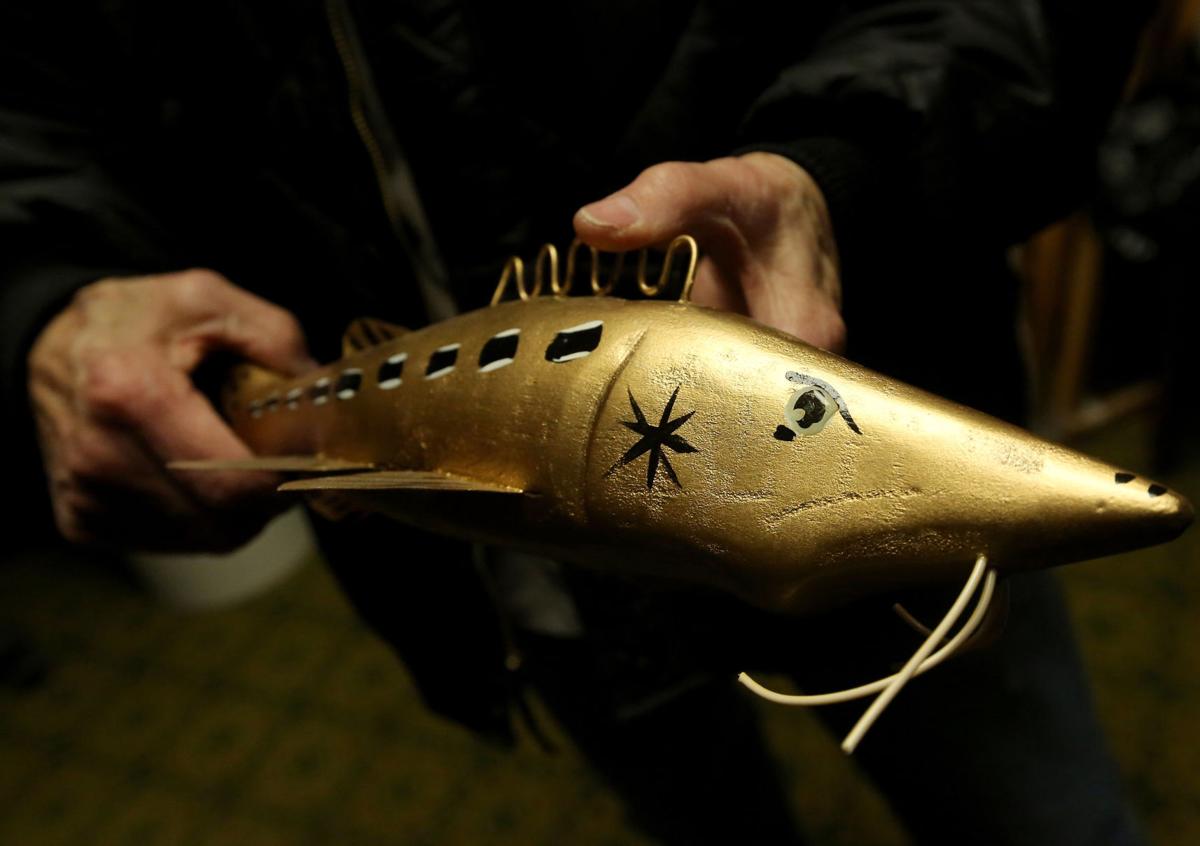 Mary Lou Schneider holds one of her hand-carved decoys used to lure sturgeon to a hole. Sturgeon roam the bottom in search of red worms but also feed on gizzard shad. 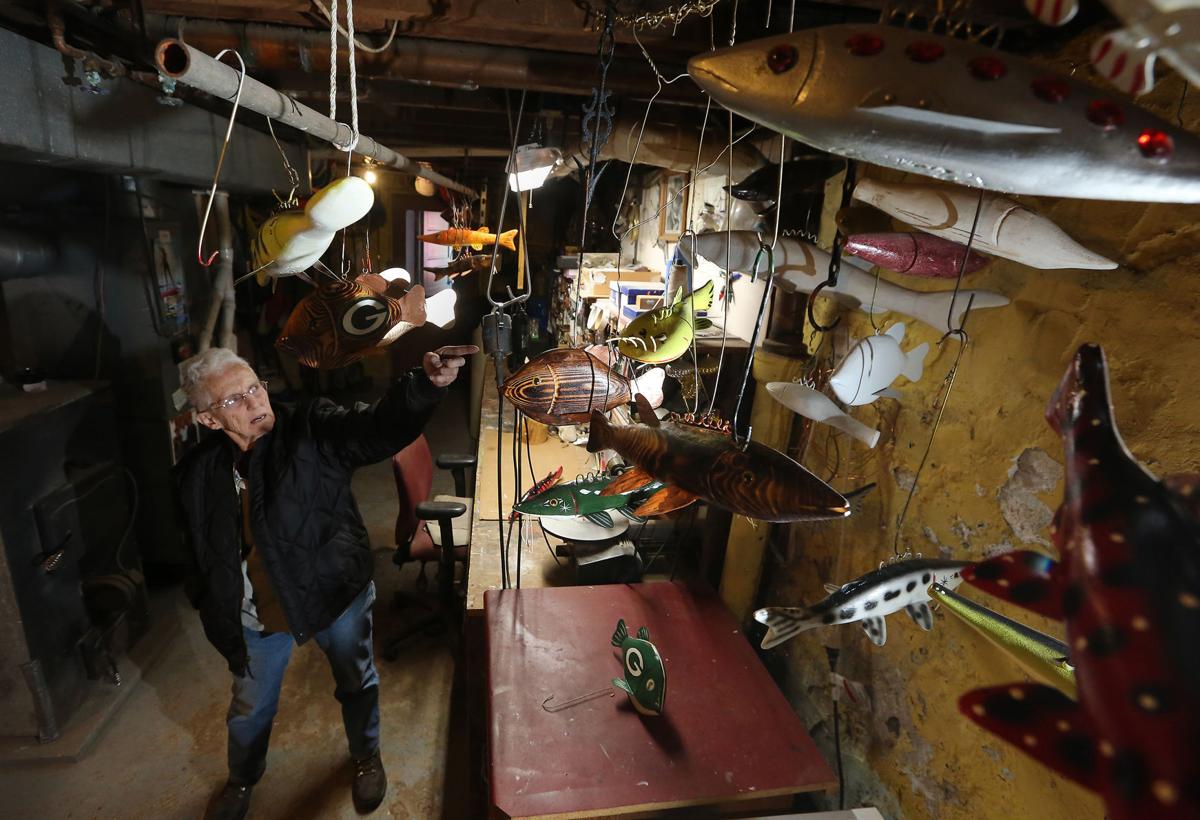 Mary Lou Schneider, 83, shows off the hand-carved sturgeon decoys in her basement workshop just northeast of Fond du Lac. Schneider is an avid spearer who in 1967 harvested a 107-pound sturgeon. She sells the decoys at sports shops and bars and restaurants for typically between $40 and $55 each. 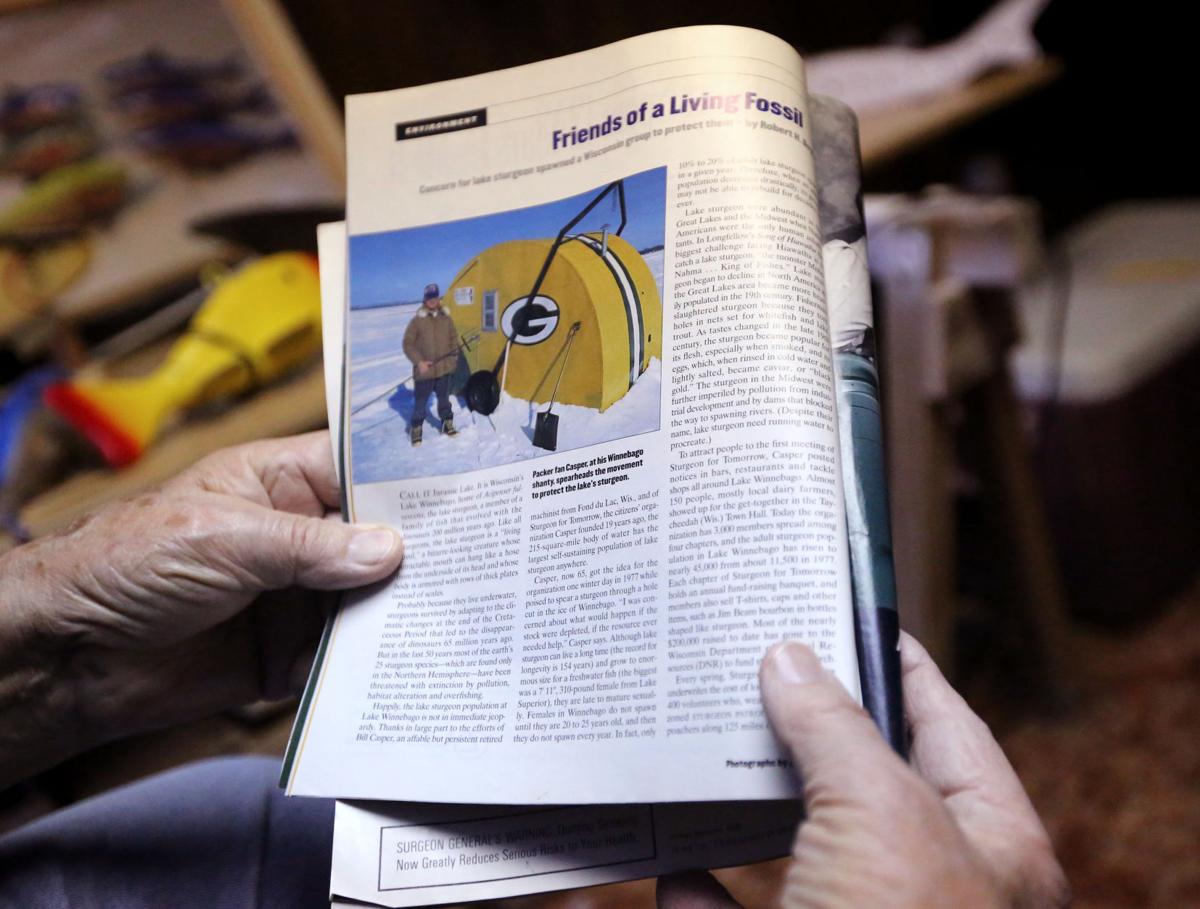 Bill Casper holds a copy of Sports Illustrated from 1996 in which he and his ice shanty resembling a Green Bay Packers helmet were featured. The shack was donated after the 2015 season to the Wisconsin Historical Society. 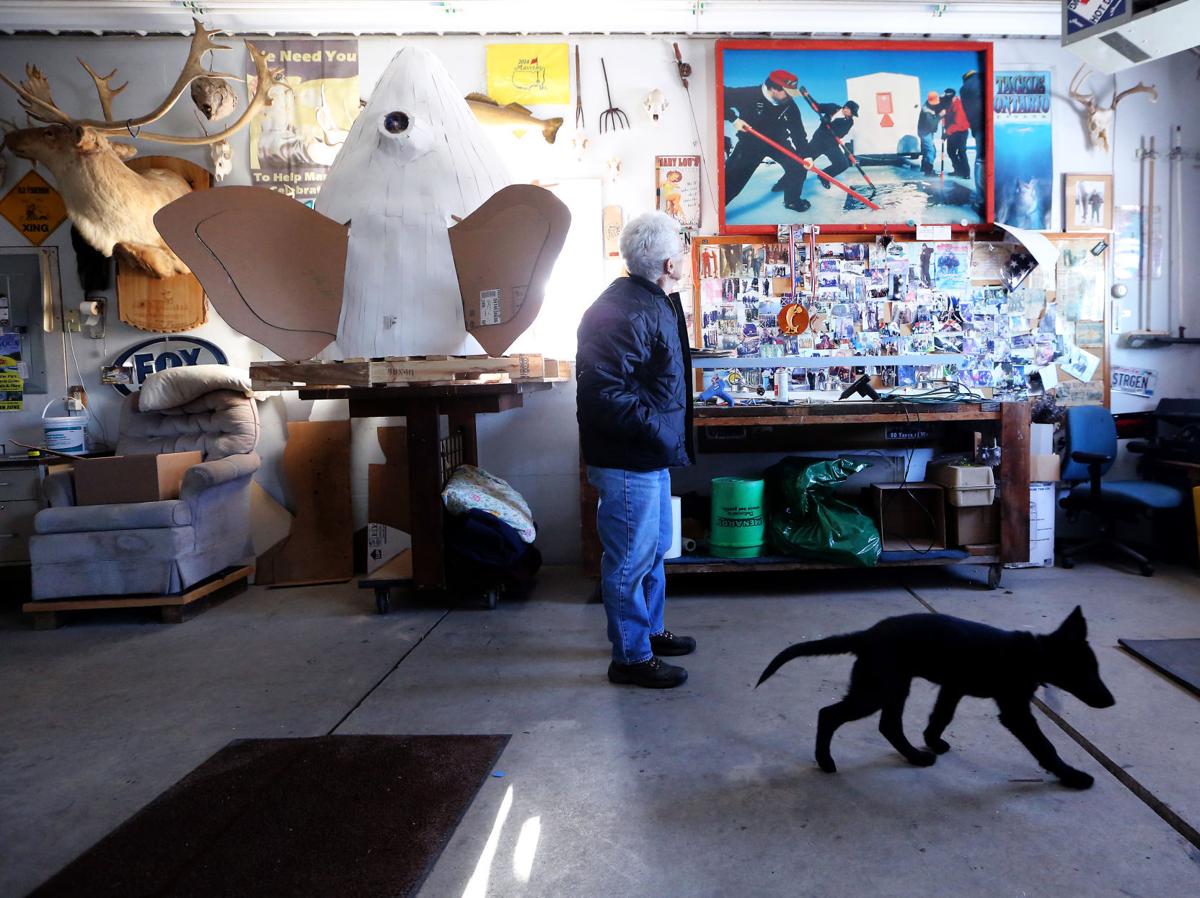 A large cardboard sturgeon head, left, waits to be painted by Mary Lou Schneider, seen here in her garage with her dog, Rudy, as she looks at photos of past spearfishing seasons. Once the season begins on Saturday, the garage and workshop transforms into a sturgeon camp. The cardboard sturgeon will be burned in effigy on Saturday as part of the Sturgeon Stampede, an event put on by the Wisconsin Association of Kiteboarders and held in conjunction with the Sturgeon Spectacular in Fond du Lac. 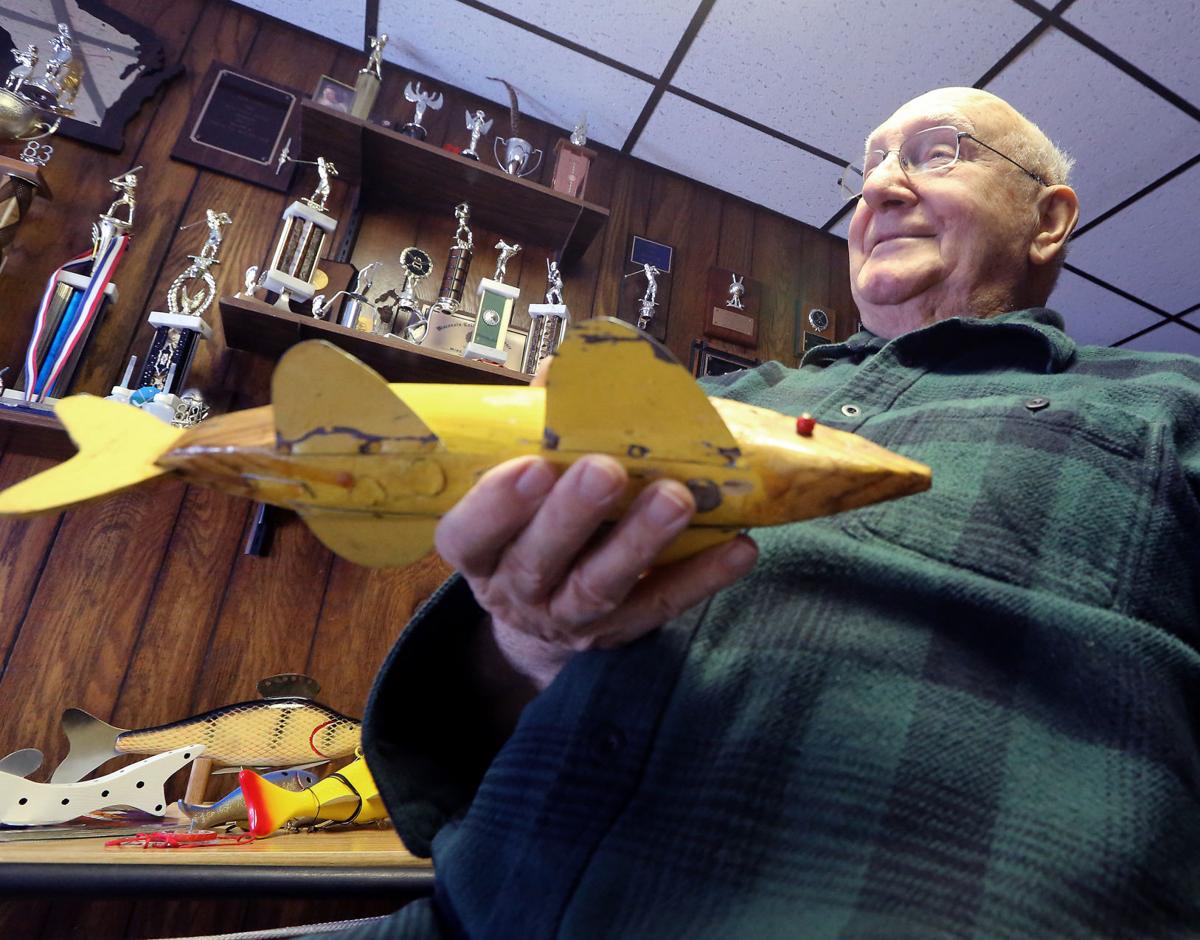 Bill Casper, 86, shows off an antique sturgeon decoy that he used for decades. Many of Casper's decoys have been donated to the Wisconsin Historical Society. 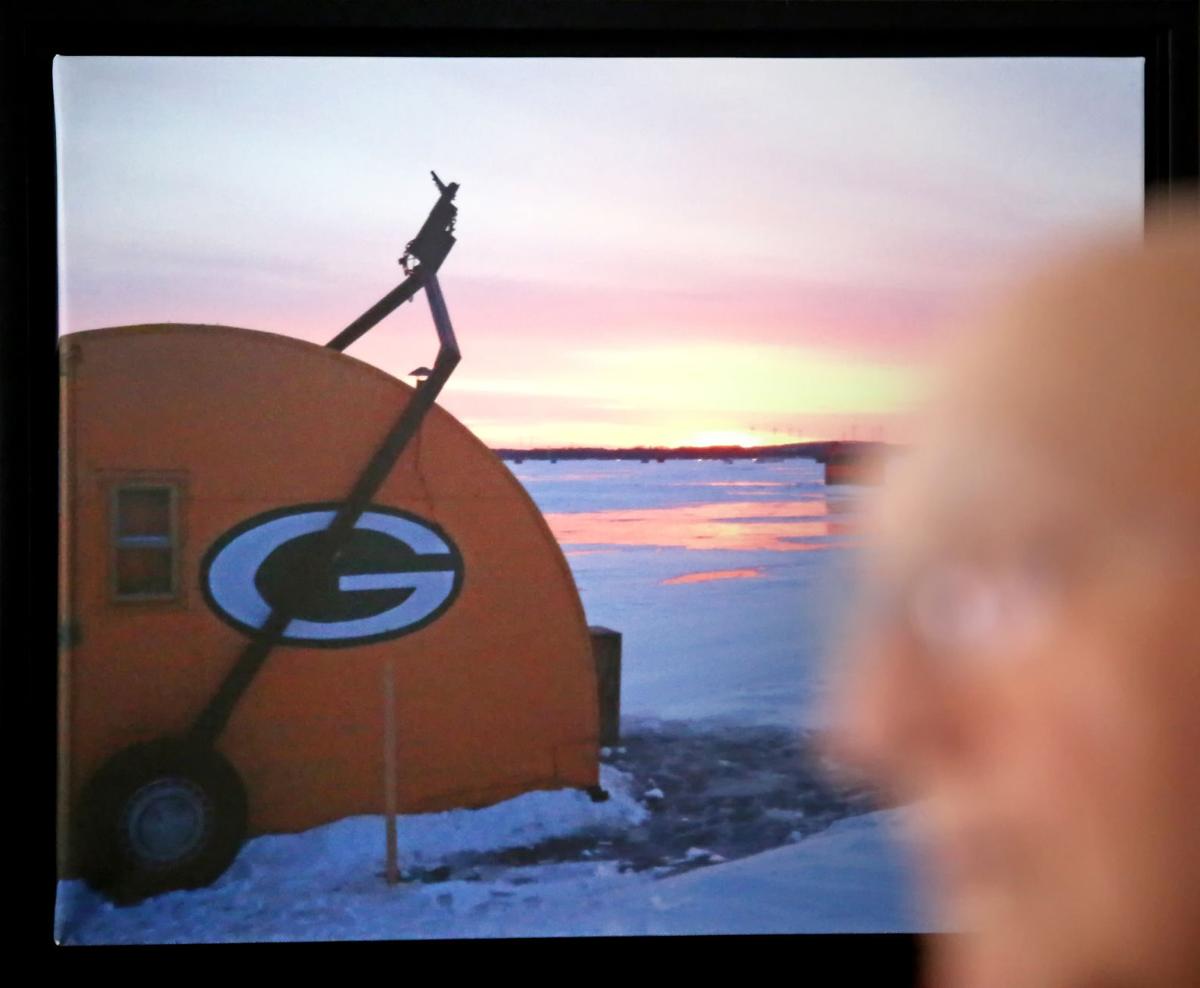 A framed image of Bill Casper's well-known sturgeon spearing shanty is displayed at his home near the shores of Lake Winnebago in Fond du Lac. The picture was taken on the last day of the 2015 season, the last time the shack was on the ice before it was donated to the Wisconsin Historical Society. 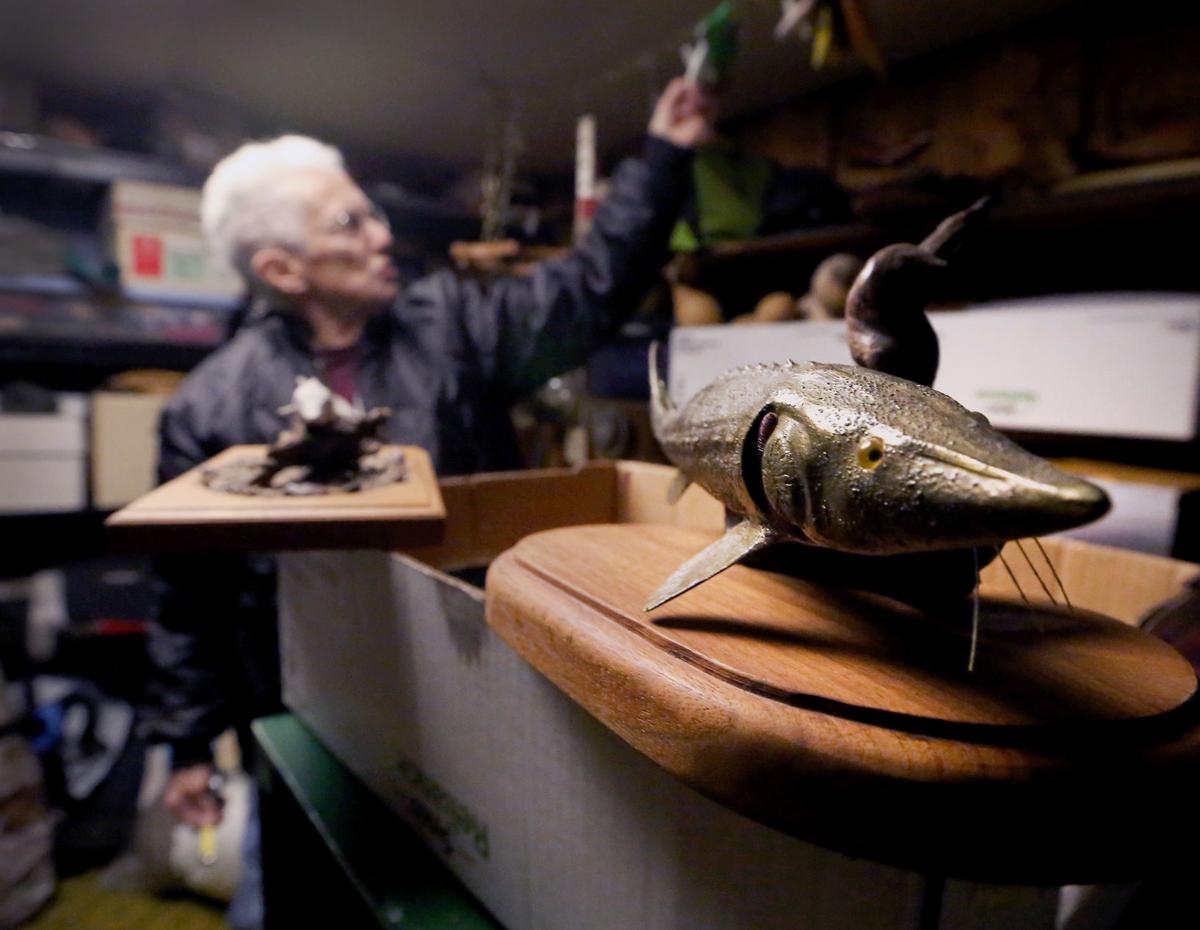