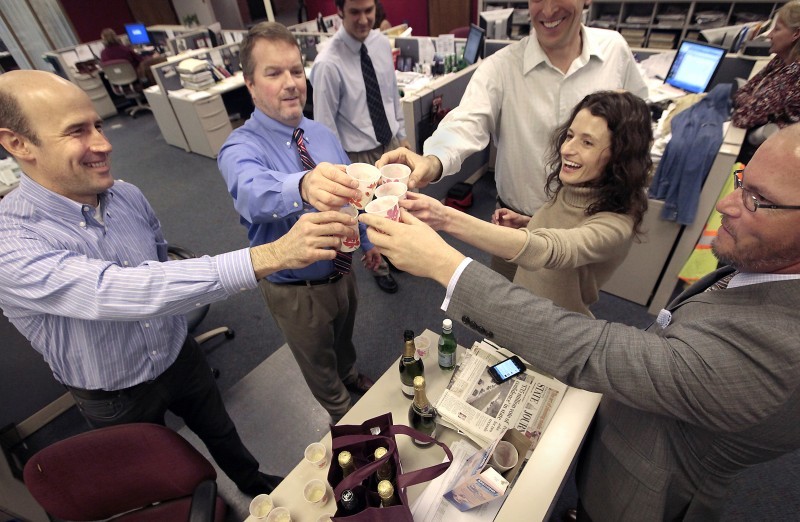 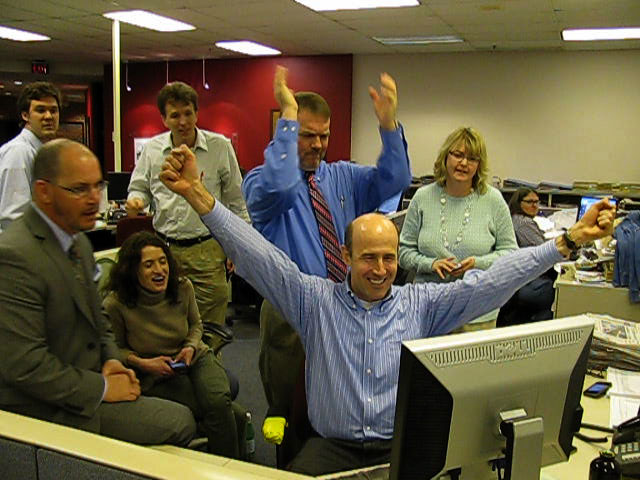 In this photo pulled from a video, State Journal employees celebrate the announcement that the newspaper was named a finalist for a Pulitzer Prize for its reporting of the events around the State Capitol in February and March of 2011. From left (in front), Capitol reporter Clay Barbour, Capitol reporter Mary Spicuzza (sitting), Editor John Smalley (standing), City Editor Phil Brinkman and managing Editor Teryl Franklin. In the background are reporters Matthew DeFour and Dan Simmons.

The newspaper's staff was recognized in the breaking news category. The Tuscaloosa (Ala.) News staff won that category for its coverage of a deadly tornado. Also named a finalist was The Arizona Republic staff in Phoenix for its coverage of the shooting of U.S. Rep. Gabrielle Giffords that killed six and injured 13.

The State Journal was recognized for roughly a month of continuous news coverage from the day Walker announced his plan on Feb. 11, 2011, through the following March 12, when the number of protesters at the Capitol peaked at as many as 100,000.

Pulitzer judges cited the newspaper's staff "for its energetic coverage of 27 days of around-the-clock protests in the State Capitol over collective bargaining rights, using an array of journalistic tools to capture one breaking development after another."

Walker set off a political firestorm when he announced a plan to fix a state budget deficit by forcing higher benefit costs onto state and local government workers and eliminating nearly all of their collective bargaining powers.

The move quickly put Wisconsin at the center of a divisive national debate over the cost of government and the rights of workers.

In more than 170 related stories, the State Journal chronicled the series of wildly unexpected and historic political developments that followed: All 14 of Wisconsin's Democratic senators fled the state to block a vote on the measure; warrants were issued to forcibly haul them back; schools closed as teachers joined the protests; and the Capitol turned into a protest village.

"Being named a finalist is a tremendous honor for our newsroom," Editor John Smalley said. "The historic protests were unparalleled, and our staff rose to the challenge in covering them."

The month-long breaking news event and its around-the-clock demands tested the limits of the staff's endurance, Smalley said. At times, nearly the entire news staff was deployed to cover different aspects of the story, augmenting the standout work of state government reporters Mary Spicuzza and Clay Barbour.

During that intense month, the newspaper published more than 7,000 column inches of related stories, photos and graphics. At the same time, the staff kept readers current with continual updates to its website, Twitter and live blogs, Smalley said.

Last week, the newspaper also won the Society of Professional Journalists' national award for breaking news for its coverage of events at the Capitol on March 9, 2011. That night, a legislative conference committee hastily amended the bill, allowing lawmakers to pass it without the striking Democratic senators.

The State Journal also received top honors in breaking news from the Wisconsin Newspaper Association earlier this year for its work covering the fallout over the collective bargaining bill.

The State Journal was named a Pulitzer finalist in 2008 for editorial page writing. At the time, the paper was cited for its "persistent, high-spirited campaign against abuses" of the governor's veto power. Editorials pressured a state senator to hold hearings on the issue, and the resulting amendment to limit the so-called "Frankenstein" veto later passed by more than a 2-1 margin in a statewide referendum.

Newspaper publisher Joseph Pulitzer, who died in 1911, established the awards in the terms of his will, and they were first given in 1917. They are formally awarded each year by Columbia University on the recommendation of the independent Pulitzer Prize board.

What the State Journal submitted to the Pulitzer board

Links to the stories and other media the State Journal submitted to the Pulitzer Prize committee.

Interactive timeline of the 2011 Walker protests

The Wisconsin State Journal has been named a finalist for the Pulitzer Prize for coverage last year of Gov. Scott Walker's deeply controversia…

In this photo pulled from a video, State Journal employees celebrate the announcement that the newspaper was named a finalist for a Pulitzer Prize for its reporting of the events around the State Capitol in February and March of 2011. From left (in front), Capitol reporter Clay Barbour, Capitol reporter Mary Spicuzza (sitting), Editor John Smalley (standing), City Editor Phil Brinkman and managing Editor Teryl Franklin. In the background are reporters Matthew DeFour and Dan Simmons.