Garrett Debbink spends most of his week herding students in a choir room at Jefferson Middle School.

The Sheboygan Falls native was hired for the Madison teaching post in 2012 straight out of UW-Eau Claire and is consumed with daily rehearsals, grading, parent-teacher conferences and periodic concerts in the school’s acoustically challenged gymnasium.

But for the past three years, Debbink, 28, has spent his Thursday nights wrangling a different breed of vocalist.

They don’t run in the halls, most have no clue about Snap Chat and virtually all are old enough to be a father, grandfather or even great-grandfather to one of his students. They also like their brandy, beer and sausage after each rehearsal, which is maybe why Madison Maennerchor has sustained itself for 165 years.

And now Debbink is at the front, directing some members who have been in the choir almost twice as long as he’s been alive.

“Compared to middle-schoolers, sometimes I think it’s very similar,” Debbink said with a laugh while clutching a Penguin Pale Ale. “But really, these guys are just here for fun. They love to sing and they love the camaraderie that goes with it. It’s about being part of a group where you belong. The singing is the amazing thing that comes from it.”

The group will show its more serious side at 3 p.m. Dec. 10 with its annual German Christmas Concert and holiday dinner at Turner Hall, 3001 S. Stoughton Road. Tickets are $25 for adults and children age 13 or older. Concert-only tickets are $10 and can be purchased at the door.

The lineup will include Christmas songs, most sung partly or all in German. The meal also follows the theme with German hams baked in sourdough bread and for dessert, stollen from Clasen’s European Bakery.

Ralph Clasen, founder of the Middleton bakery, has been a member of the choir since 1962 and each week shares his hearty bread that the 25 to 30 members top with slices of salami, braunschweiger and, on some occasions, Limburger cheese. The post-rehearsal social last week included shots of Jagermeister, Korbel Brandy and bottles of Oktoberfest from Leinenkugel’s.

One group engaged in table-pounding rounds of four-handed Schafkopf, more commonly known as sheepshead. The players included Klaus Bodenstein, 75, and his brother, Dieter Bodenstein, 79. They both have been members for over 50 years, although Dieter hasn’t sung for about five years due to health issues.

“We’ve made a lot of friends over the years,” said Klaus, a tenor, who was born in Liegnitz, Germany, and joined the choir shortly after immigrating here in 1966 to join his brother, Wolfgang, in a wrought-iron business. Klaus also drove bus for Madison Metro. “I like music. But I didn’t sing on the bus.”

The Madison Maennerchor is the state’s oldest German men’s choir. It was founded in 1852, just four years after Wisconsin transitioned from a territory to statehood. The 12 charter members’ first concert was performed in February 1853 in a Baptist church just off Capitol Square. The choir has performed in festivals, competitions and events around the state and now holds spring and holiday concerts. It performs at other functions which can include parties, at senior living facilities, Oktoberfest at the Essen Haus, Turner Hall in Monroe and gigs at Wauktoberfest in Waunakee.

In 1935, the group had nearly 40 members and when it celebrated its 100th anniversary in 1952, it performed in the Central High School auditorium. Other musical organizations on the bill included the Madison Civic Chorus, Madison Symphony Orchestra, the Mozart Club and the New Glarus Maennerchor. Madison Maennerchor dwindled to just 12 members by 1956, but 10 years later saw its numbers rise to 39 members and its peak in the early 2000s had over 40 members.

Today, officials are trying to attract younger voices to the group, as many of those in the chorus are in their 60s and 70s. Having a younger director, like Debbink, is seen as a step in that direction, but members are also pushing out information on social media, including Facebook and Twitter, in order to extend the reach.

“We’re trying different things,” said Tim Hughes, a Milwaukee native who studied German at Carthage College in Kenosha and joined the choir when he moved to Madison in 1986. “People are so busy they don’t want to join things anymore. Nobody’s a joiner of clubs anymore.”

Similar clubs exist in Manitowoc, Sheboygan, Kenosha and Milwaukee, but at one time many more dotted the state — some with 60 or more members — but have since disappeared.

Prior to Thursday’s 90-minute rehearsal at Turner Hall, a few warmed their voices with a shot of peach schnapps. The storage cabinet where choir members keep their red, three-ring music binders, serves as a reminder of the group’s German heritage. The last names include Bausch, Berger, Blumer and Hartwig. But Hughes, whose great-grandfather, Fred Schlueter was a member decades ago, said that while several members of Madison Maennerchor were either born in Germany or have strong German lineage, others have Welsh, Dutch, Polish and Hungarian backgrounds.

Being German or knowing German is not a requisite.

“There were no Hungarians around so this is the closest thing,” said Henry Spelter, 70, who joined in 1994 and is retired from the USDA Forest Products Laboratory in Madison. “I like the German language, so I always spoke it. I’ve found a home here.”

Most members live in the Madison area, but some drive more than an hour to take part in the choir and reconnect with their German roots.

Mel Grulke, 76, a retired banker from the Dodge County village of Hustisford, joined in 1999. He was born in the U.S., but his parents and grandparents spoke German at home and taught the language to him and his siblings.

“In grade school, I used to get teased a lot because I used to go to German church with my parents,” Grulke said. “I learned German before I learned English.”

Fred Berger, 76, a retired police officer from Beaver Dam, was born in East Prussia and moved to the U.S. in 1955 with his parents, who had relatives in Madison. A short time after, his father moved the family to a farm in Lowell, east of Columbus. Berger learned of the Madison Maennerchor when he came to Madison in the spring of 1996 to finish up paperwork for his retirement. He stopped at the Essen Haus for a beer and found men dressed in suits, drinking beer and singing songs around a table. He joined the group that fall.

“There’s nothing like a German choir,” said Berger, who at one time was a member of four different choirs. “I’ve always liked to sing.”

The oldest member of the group is believed to be Walter Bausch, 89, who joined in 1956. One of the youngest, other than Debbink, is Jesse Allhands, 33, who studied German at UW-Madison and lived for two years in Austria. He’s been a member of the choir for six years and at Thursday’s rehearsal sat front-row center as Debbink directed. Allhands was also president of the German club when he was in college.

“This is the perfect way to stay in touch with the music and the culture,” he said.

“These guys are just here for fun. They love to sing and they love the camaraderie that goes with it. It’s about being part of a group where you belong. The singing is the amazing thing that comes from it.” Garrett Debbink, director of the German men’s choir Madison Maennerchor

Dan Fass will close Middleton Cycle, a business founded by his father in 1972, and sell the assets and inventory to Milwaukee-based Wheel & Sprocket.

Keeping up and improvising with Buster Keaton 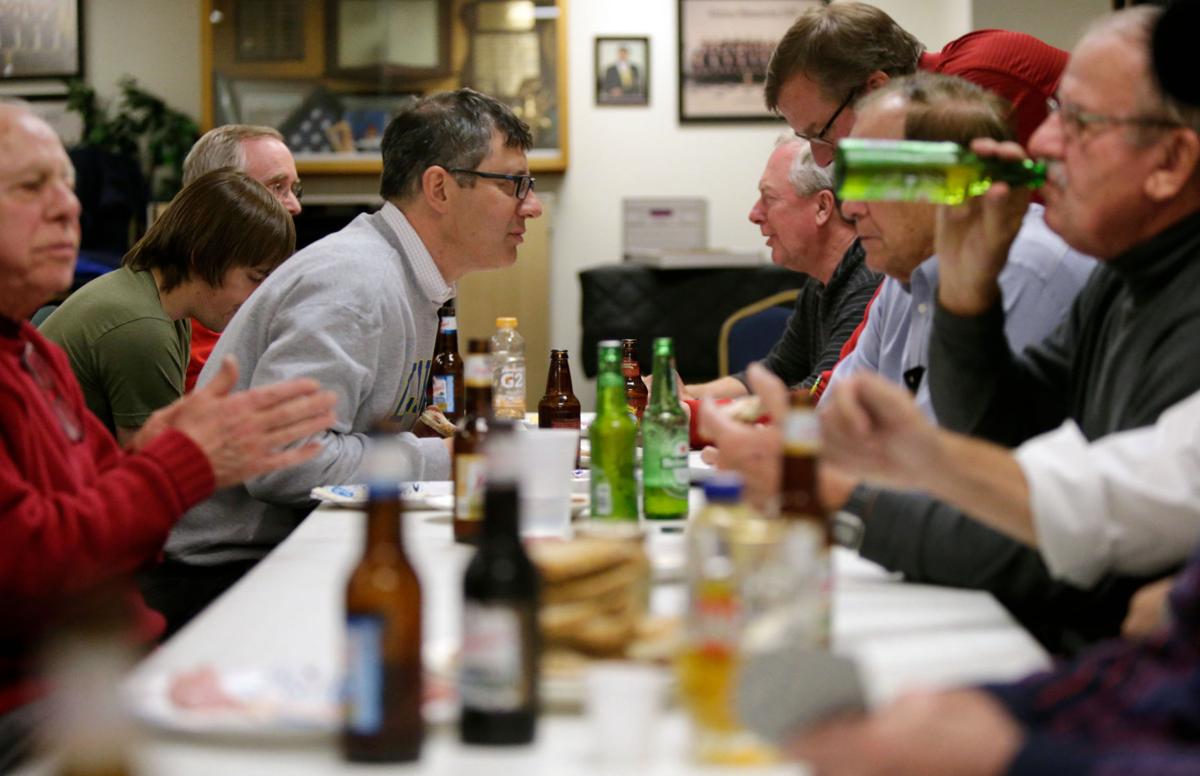 A small room at Turner Hall in Madison is transformed into a makeshift beer hall following rehearsals of the Madison Maennerchor. The social aspect of the choir is on par with the singing and includes beer, plates of cheese, sausage and bread and the occasional shot of Jagermeister. The choir is celebrating its 165th anniversary and on Dec. 10 will hold its annual Christmas concert and dinner at Turner Hall. 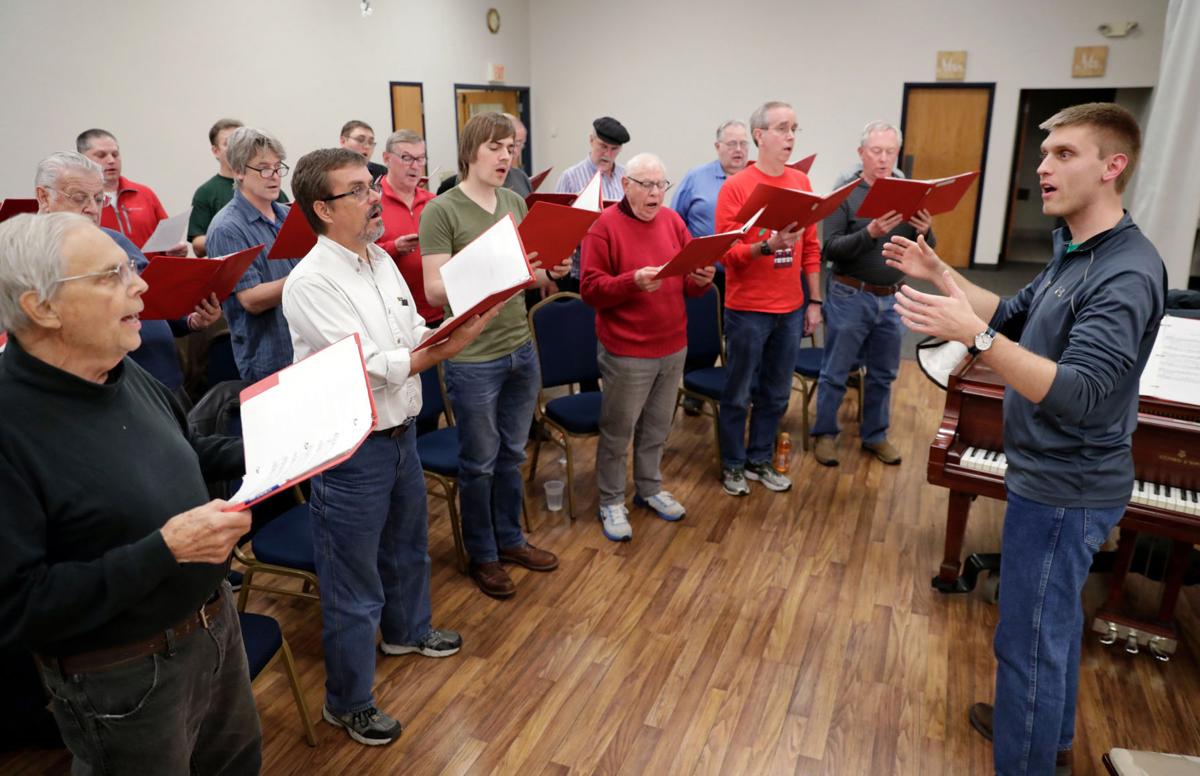 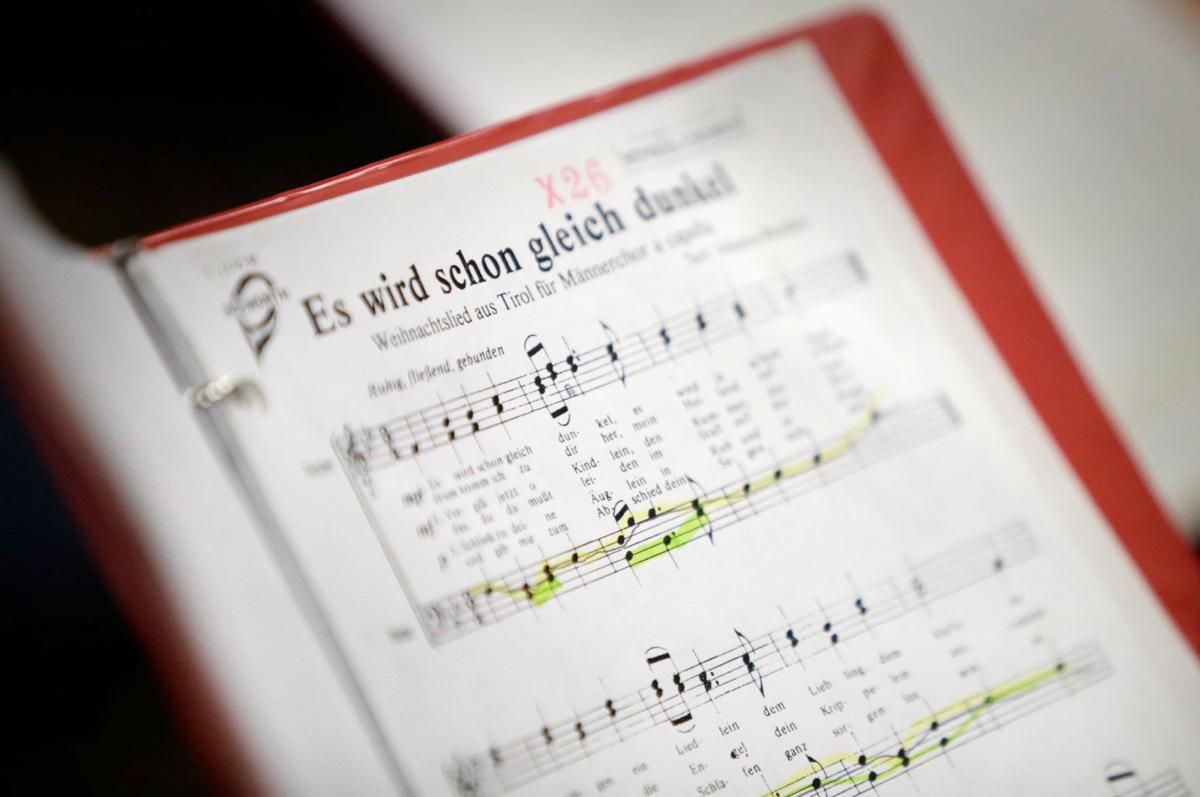 The music sung by the members of the Madison Maennerchor is a mix of English and German. Among the songs rehearsed Thursday was "Es wird schon gleich dunkel." 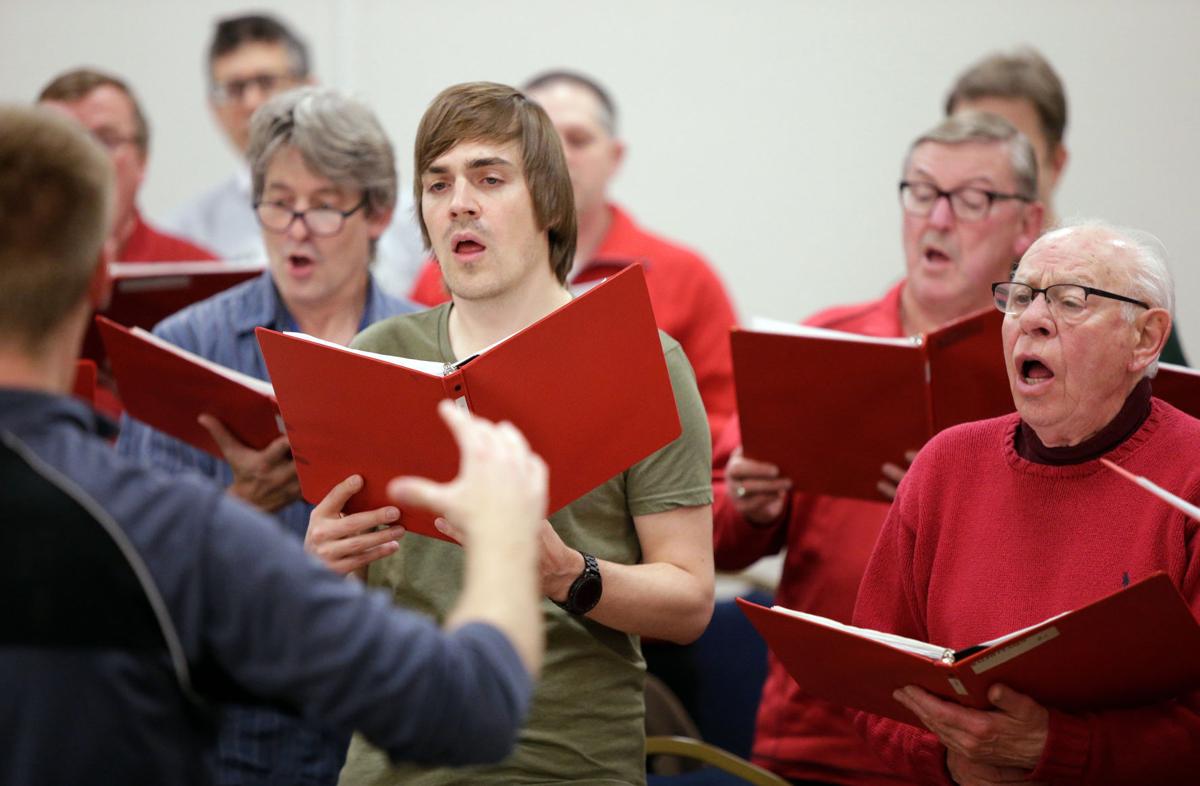 Jesse Allhands, left center, and Ralph Clasen, far right, represent the broad spectrum of vocalists who sing in the Madison Maennerchor. Allhands, 33, has been in the choir for six years and studied German at UW-Madison. Clasen, founder of Clasen's European bakery in Middleton, has been a member of the choir since 1962. 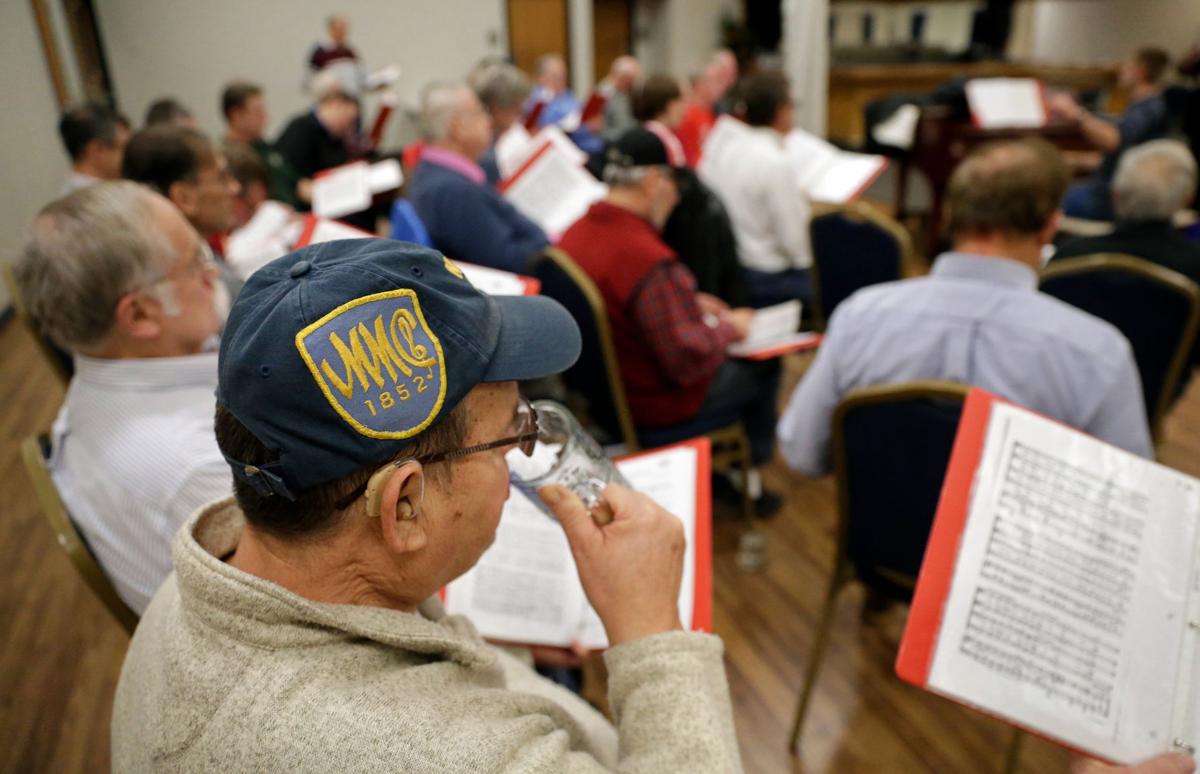 Klaus Bodenstein takes a sip from a Madison Maennerchor-branded beer mug and wears a vintage choir baseball cap during a 90-minute rehearsal Thursday. Bodenstein, who was born in Germany, has been a member of the choir since the 1960s.  T 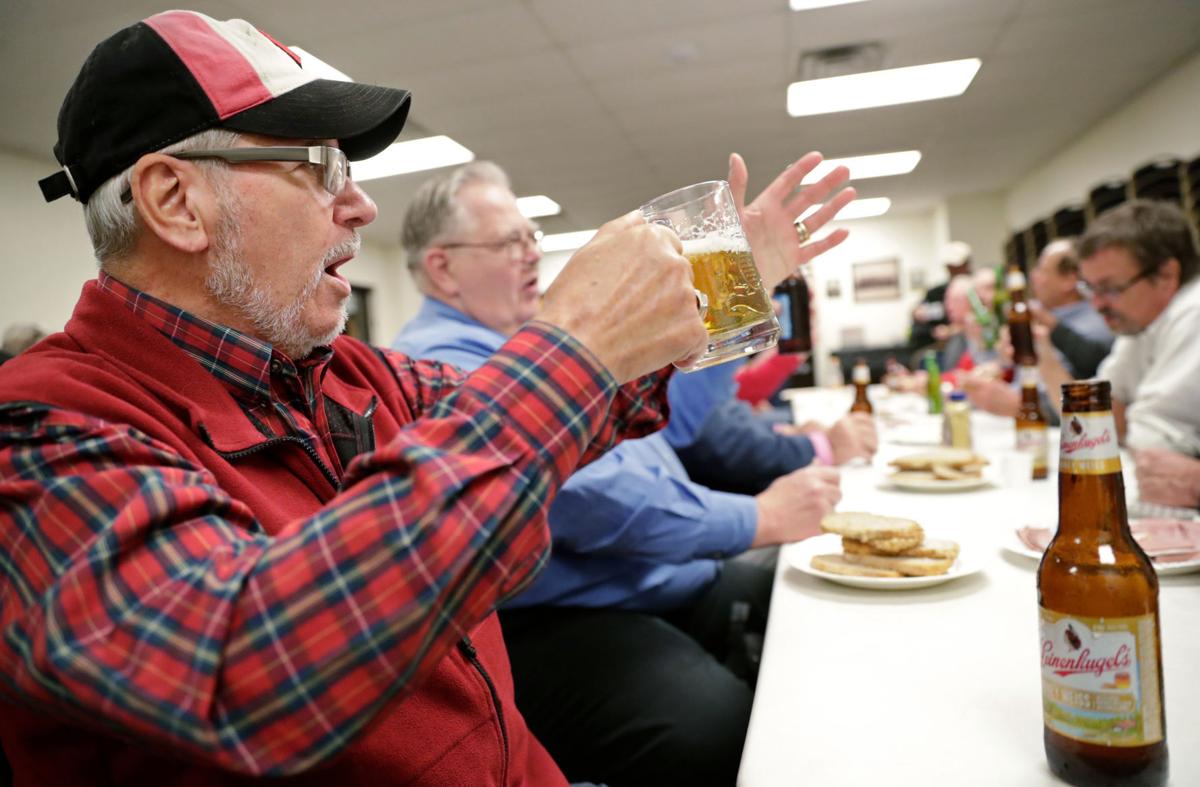 Paul Essert and his fellow members sing a toast Thursday as they gather over drinks, bread, cheese, meat and card games after a reheasal of the Madison Maennerchor. Essert, a tenor, joined the choir in 1967, just days after arriving from Germany. 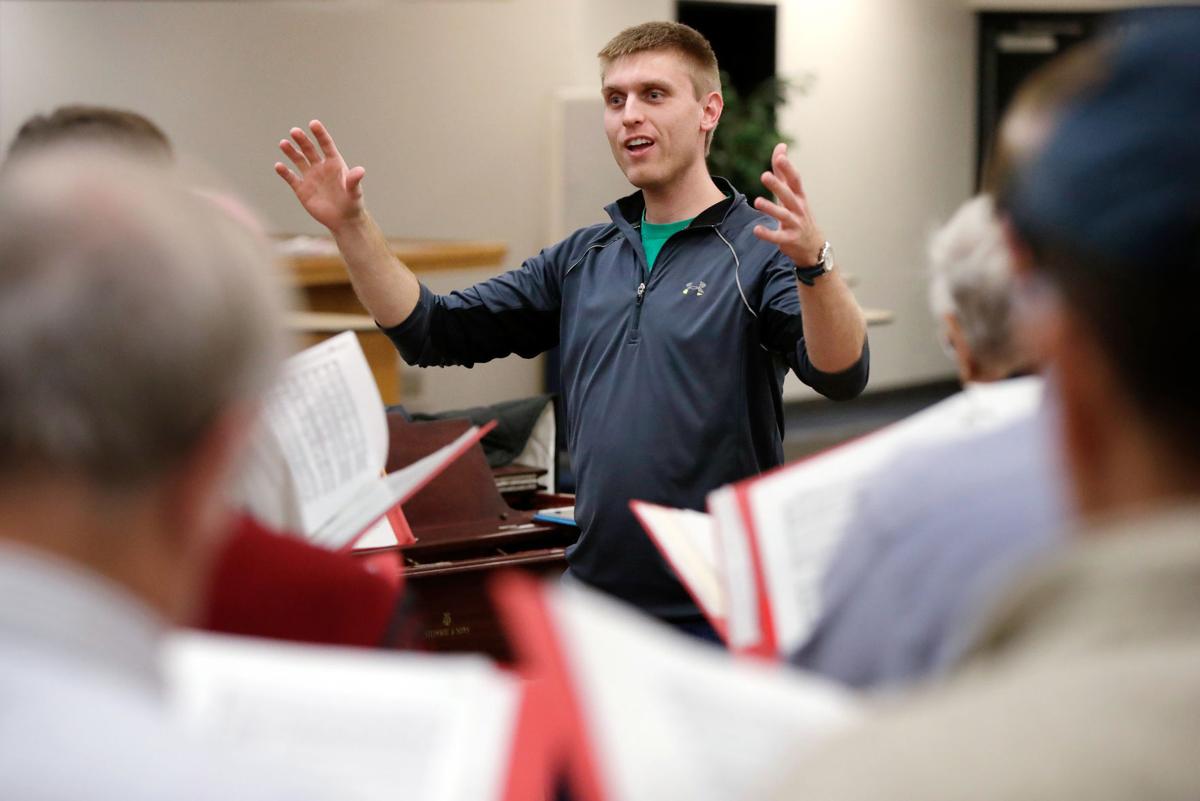 Garrett Debbink, 28, director of Madison Maennerchor, is one of the the youngest members of the choir. The Sheboygan Falls native and UW-Eau Claire graduate is trying to recruit younger singers to the group, which has many members in their 60s and 70s. 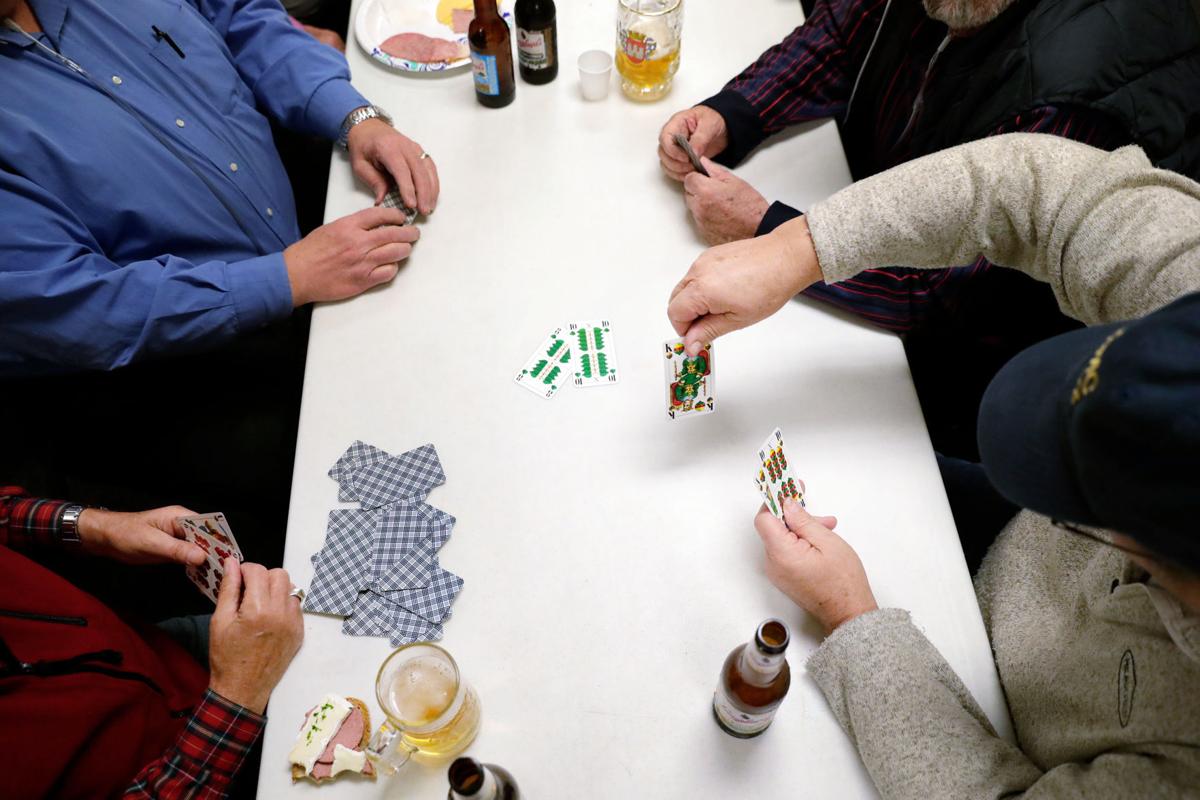 Members of the Madison Maennerchor play hands of SchafkopF, more commonly known as sheepshead, following a rehearsal Thursday at Turner Hall in Madison. 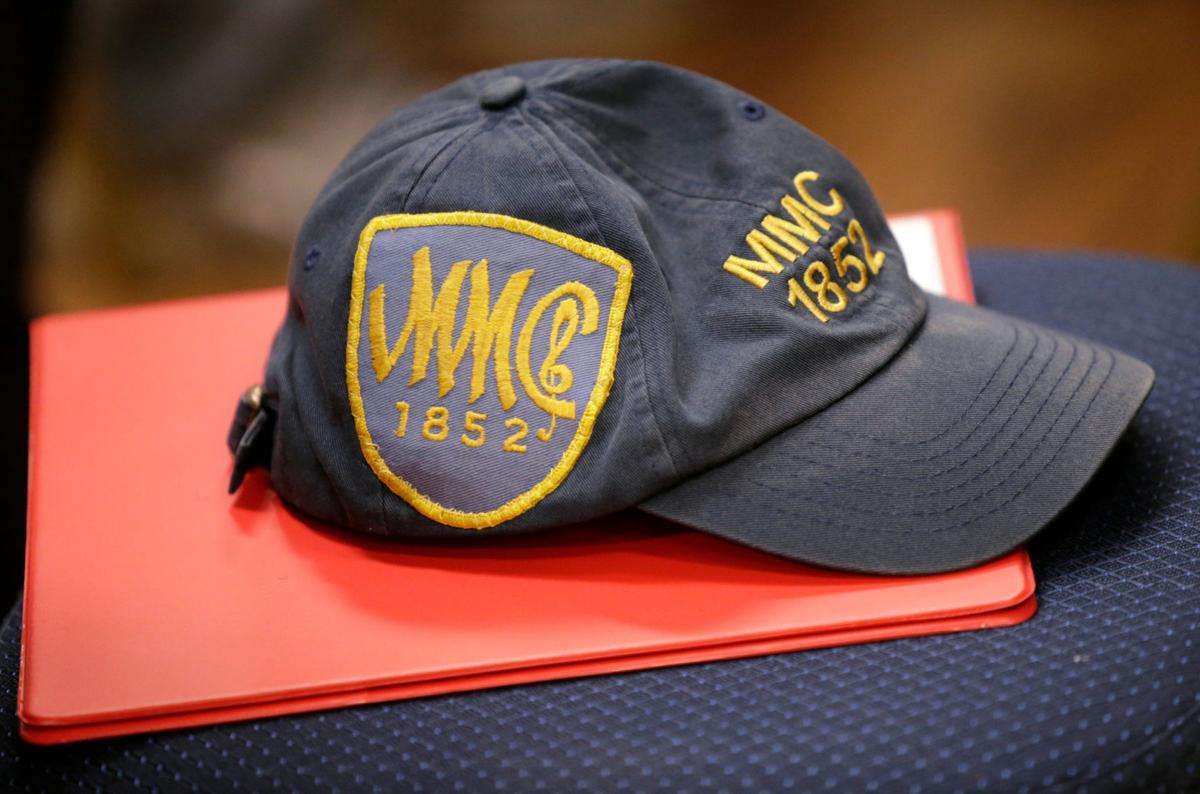 The hat and music binder of Klaus Bodenstein get a break during a rehearsal Thursday at Turner Hall in Madison. The choir was founded in 1852 and is the oldest German men's choir in Wisconsin.