Nineteen-year-old Cat Harrison said sometimes she feels afraid. As a Black and Hispanic woman, she said “you never know” when you could become a victim of violence because of the color of your skin.

But Harrison said being around the roughly 150 protesters who marched throughout Madison Sunday afternoon to promote unity in the wake of recent violence against marginalized communities makes her feel stronger and supported.

“We are making a difference through our voices,” Harrison said. “When you’re silent, it just gives consent for all these terrible things to happen.”

Harrison bellowed chants along with the group as they marched from the Camp Randall Arch to Capitol Square, drawing attention to a recent rash of violence and police brutality against people of color across the country.

Organizers of the unity march, such as Megan Spielbauer Sandate with the UW-Madison BIPOC Coalition, cited a number events that motivated them to put together the event, including the return of Kenosha police Officer Rusten Sheskey’s recent return to work without punishment after shooting Jacob Blake last summer; the ongoing trial of former officer Derek Chauvin, who is charged with murder in the death of George Floyd in Minneapolis, which sparked global outrage and protests in 2020; the recent murder of six Asian Americans in Atlanta after a gunman went on a rampage that targeted massage parlors; the death of Daunte Wright, who was shot by a police officer in Brooklyn Center, Minnesota, a suburb of Minneapolis; and the death of 13-year-old Adam Toledo, who was shot by a Chicago police officer.

“There’s been so much violence, and state-sanctioned violence, in the last couple of weeks, and it’s not a surprise, it’s not new — that doesn’t mean it doesn’t hurt,” Spielbauer Sandate said. “We want to figure out what our collective goals as a community are, and how we plan to move those forward throughout the summer.”

The march stepped off from the Camp Randall Arch at 3 p.m. and traveled east on Dayton Street, with a caravan of cars in the front and behind the group of marchers, as well as about a dozen bicyclists who rode alongside the crowd. Police blocked off traffic for the demonstration.

Banners and posters of many colors dotted the crowd, reading “It is our duty to win,” “Liberation Revolution,” “White silence is violence,” “Trans rights are human rights,” “Black lives matter” and “None of us are free until all of us are free,” among other messages.

“It feels empowering, just seeing all of the people who are out here to support Black lives and a lot of them are not Black people — that’s super exciting,” said Althea Bernstein, one of the organizers. “It’s super awesome to see a whole rainbow of people.”

Marchers walked over a faded mural that read “Police Free Schools” painted on the pavement outside of the Madison School District’s Doyle Administration Building during last year’s protests in an effort to pressure the School Board and City Council to remove school resource officers from buildings. The effort was successful.

Andi Janeway, who worked as a member of the safety team for Sunday’s march, remembered taking part in last year’s demonstrations.

“This is a lifelong fight for everyone,” Janeway said. “It’s not going to stop until we dismantle these oppressive systems. So we’re out here as often as we can be. We’re doing the work every day. It’s a sacred duty to work toward the betterment of humanity.”

Marchers called for people watching from porches and balconies to join them as they continued east on Dayton Street toward Capitol Square.

They made their way past Madison Fire Department Station 1, where the American flag flew at half staff to mark Thursday’s mass shooting at a FedEx facility in Indiana in which eight people were killed, including four Sikhs, before the gunman killed himself. The protesters turned from Dayton Street onto Henry Street and then onto West Washington Avenue, reaching Capitol Square at 3:35 p.m.

They marched around the Capitol Building and stopped for a “kick back” at the top of State Street — a space that became a community gathering ground last summer during protests against police brutality and the death of Floyd.

Organizers set up a sound system and a grill, and handed out burgers, chicken, hot dogs, vegan burgers, vegan hot dogs and water to demonstrators. Darin Hicks, an organizer with Black Umbrella, said the local takeout restaurant Teddywedgers donated some of the food.

Hicks said the goal is to bring people together and raise awareness about the injustices that are happening in the U.S.

Harrison said her dad doesn’t drive in the same car as her brother because he’s afraid that police would see two Black men in a car and pull them over.

Ashley Cheung, 18, who is Chinese, Canadian and American, said during the COVID-19 pandemic, there has been increasing discrimination and violence against Asian Americans. She said her own family has experienced discrimination.

Amanda Zhang, 20, who is also Chinese, said people don’t always assume that the Asian community is discriminated against because they’re seen as the “model minority.” But she’s experienced microaggressions, such as people assuming that she doesn’t know how to speak English, Zhang said.

Janeway said racism against different groups of people are “intertwined,” and all of the groups need to work together to uplift each other and make progress on bettering society.

Cheung said it feels like “nothing is changing.” But she wants to be a part of fighting against police brutality, Asian hate, racism and violence against people of color.

“I think that for a long time, I’ve always tried to make myself seem as small as possible,” Cheung said. “But I realized recently that I deserve to take up space and that my opinions and my voice matters. I want to make change.”

On Monday (the day before of the release of the verdict in the Chauvin murder trial), I noticed something remarkable while reading the New Yor…

The message outside the Madison School District building became the latest field where protesters and city staff faced off in a battle of wills Friday morning.

Some drivers ran through small crowds of protesters Tuesday, causing injuries among those who were supporting Black Lives Matter.

Photos: Madison protesters stand against police brutality with 'Glow in the Dark March'

More than three weeks after the death of George Floyd, hundreds of protesters again took to the streets of Madison to march against racism and…

Cold start to week could bring snowflakes to southern Wisconsin, with accumulating snow not far away

A swath of accumulating snow could touch far southern Wisconsin as it moves across the central U.S. in a cold week for the second half of April, according to forecasters.

Three people were injured in a crash Friday night on the Southwest Side that followed an altercation at a convenience store, Madison police reported.

3 injured in head-on crash on Highway 51 in Janesville, police say

Three people were injured in a head-on collision Saturday afternoon at the intersection of Highway 51 and Knilans Road in Janesville, police reported.

Two men were convicted in shooting that killed a man and injured two others in Beloit in 2019, the state Department of Justice reported. 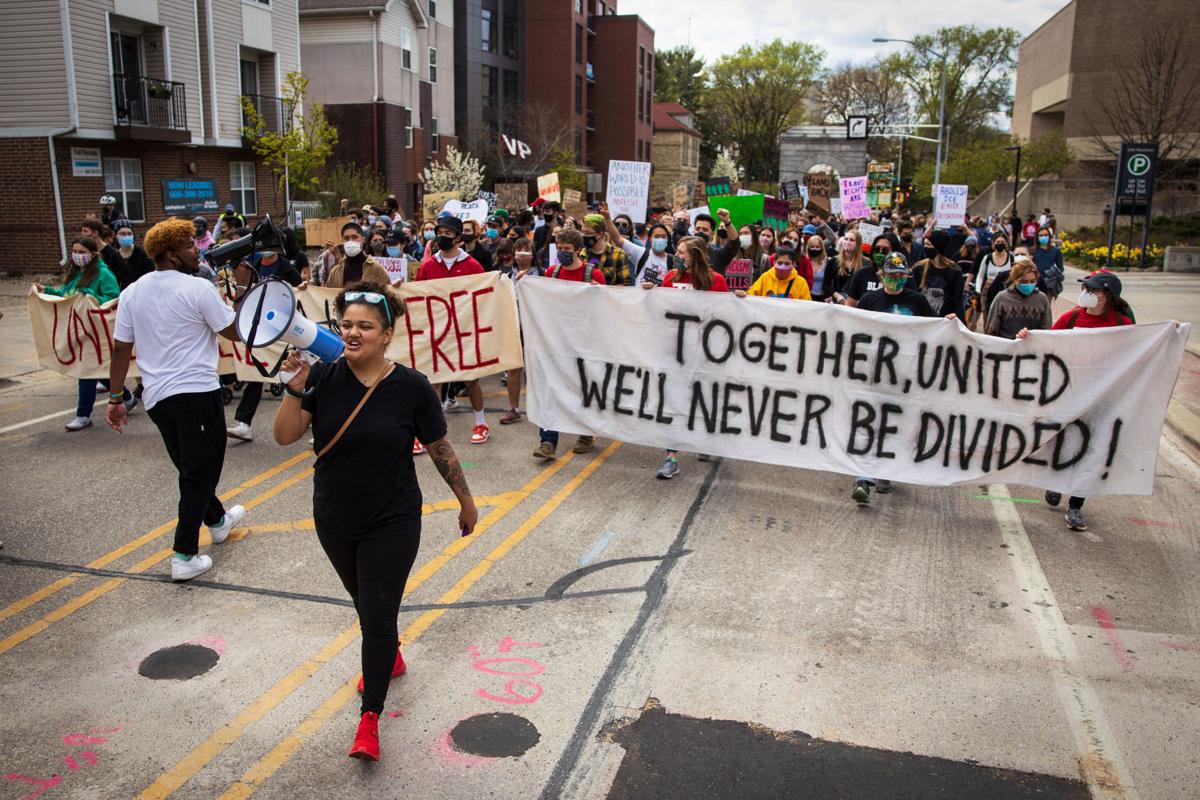 Althea Bernstein leads a "unity" march of about 150 people through UW-Madison's campus Sunday afternoon. Organizers said the demonstration was meant to bring together people from multiple marginalized communities — including Black people, Asian Americans and Latinos — to promote healing after recent violent events across the nation. 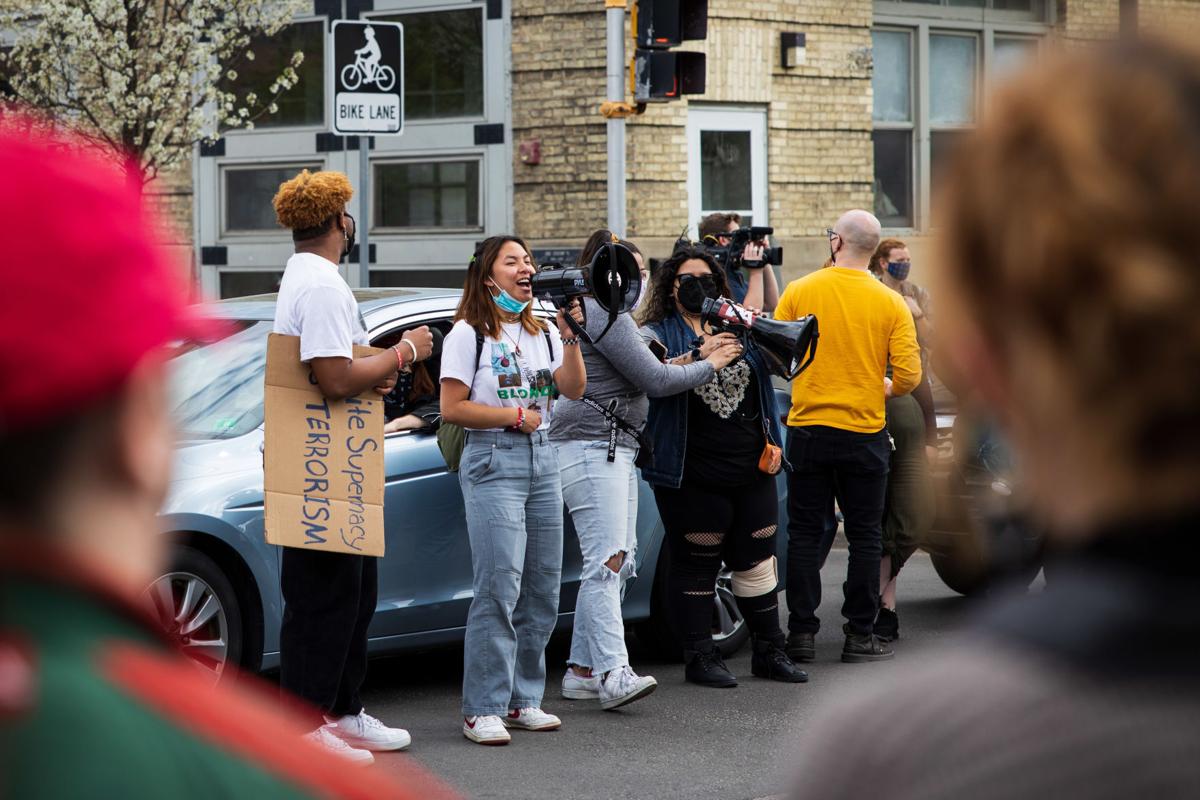 Ashley Cheung, 18, leads a crowd of about 150 people in a chant to show solidarity with marginalized communities after recent violent events across the nation, including the police shooting of Daunte Wright in Brooklyn Center, Minn., and the mass shooting of six Asian Americans in Atlanta. Cheung, who is Chinese, Canadian and American, said it feels like "nothing is changing." 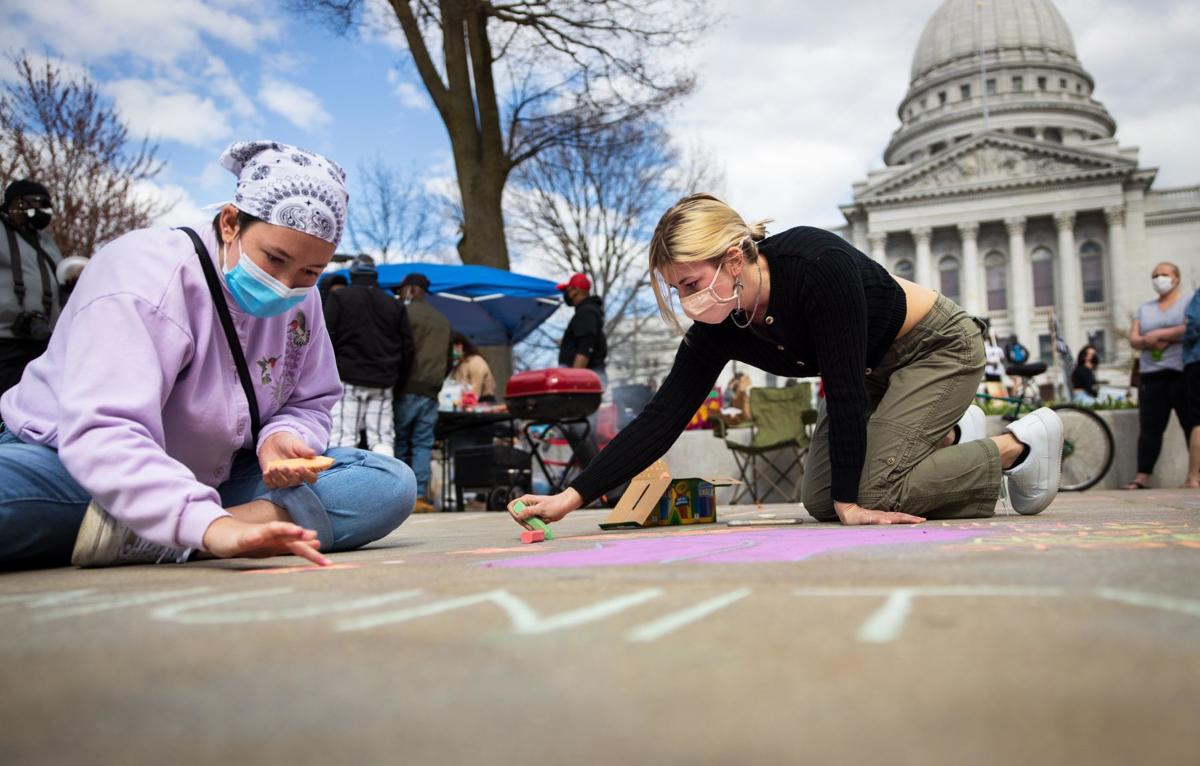 Sisters Jamie Curtin, 17, left, and Aaron Curtin, 22, create chalk drawings to celebrate the community and justice on the sidewalk of the Capitol Square during a "kick back" after the march. 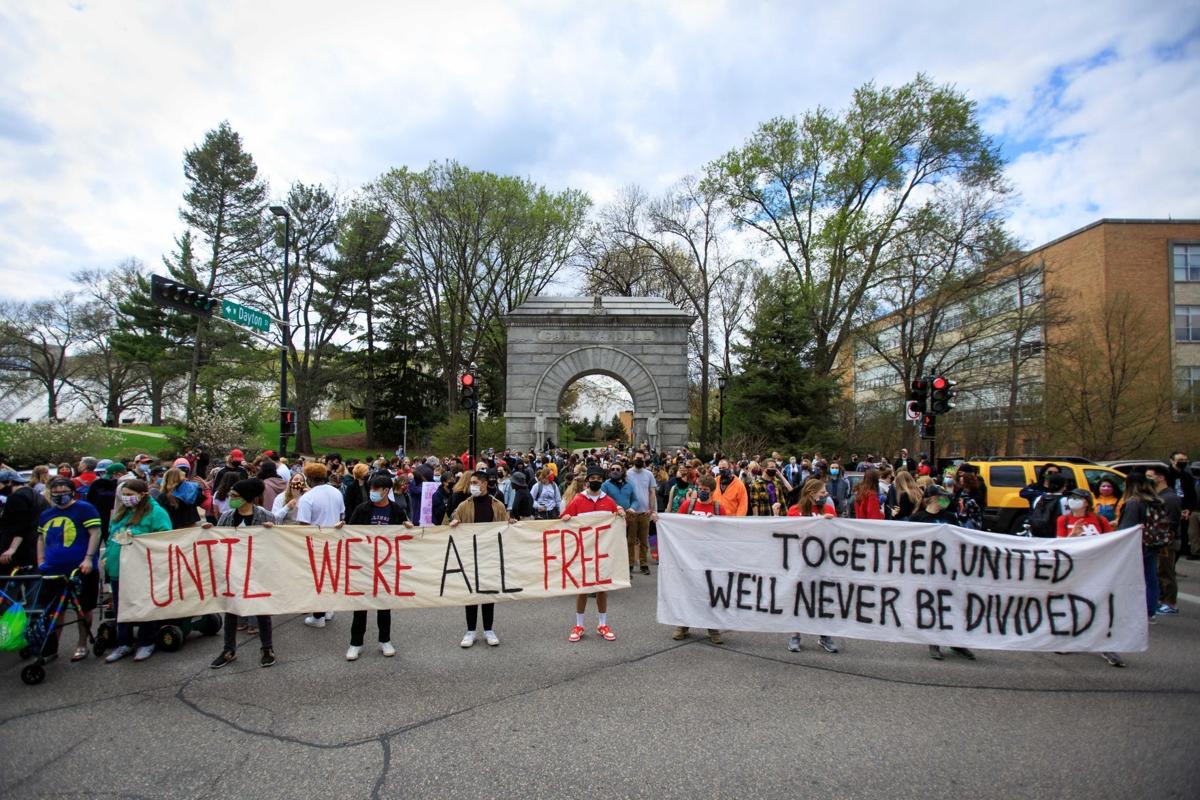 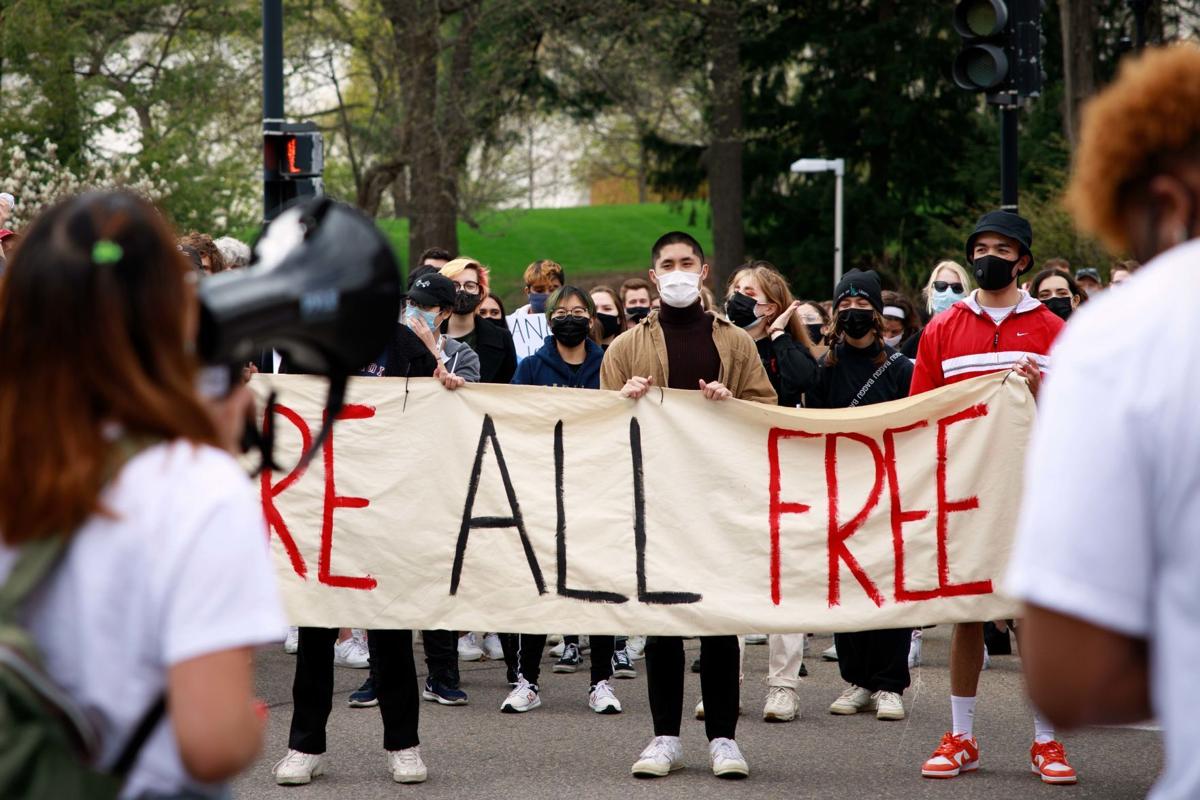 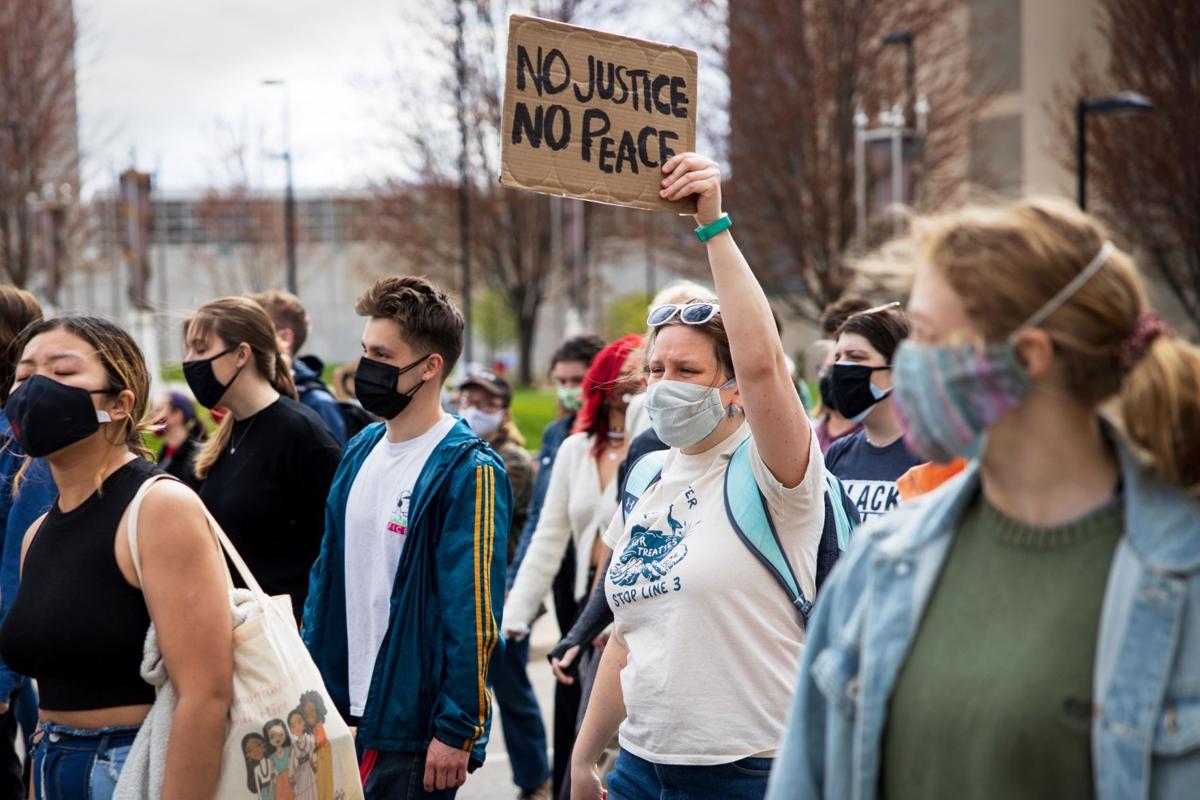 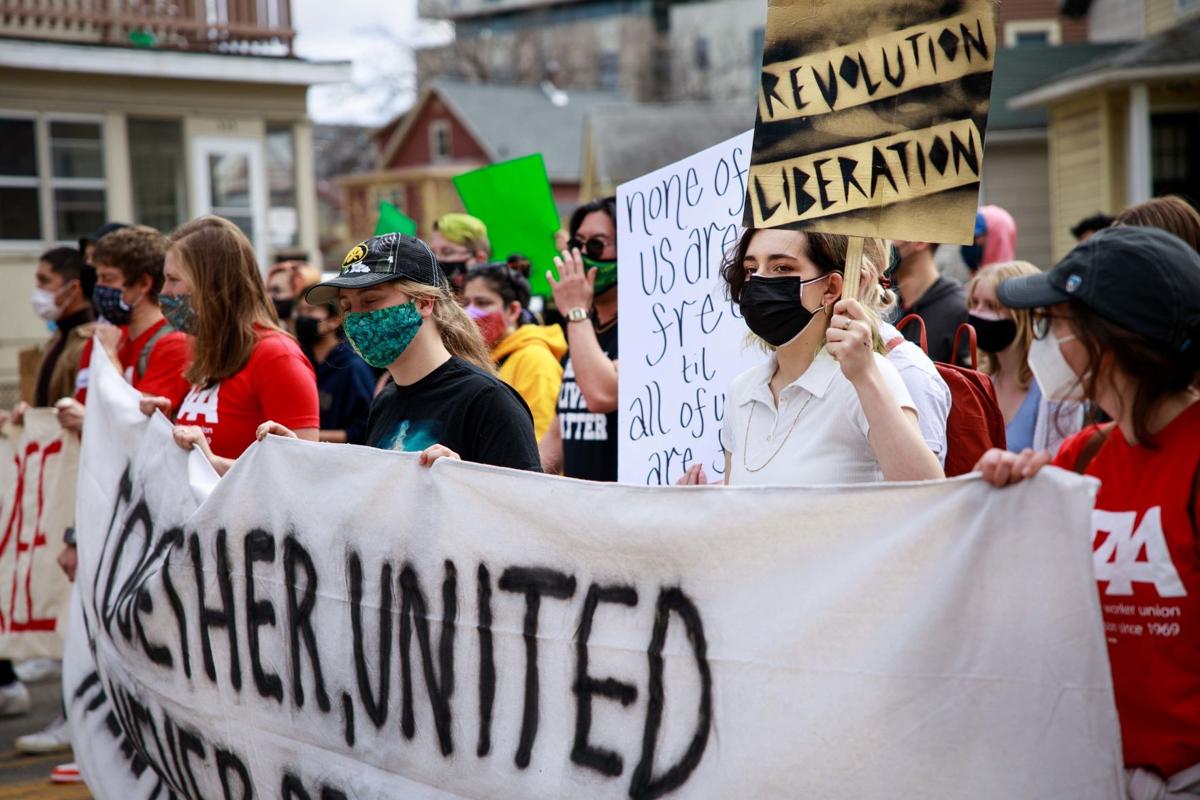 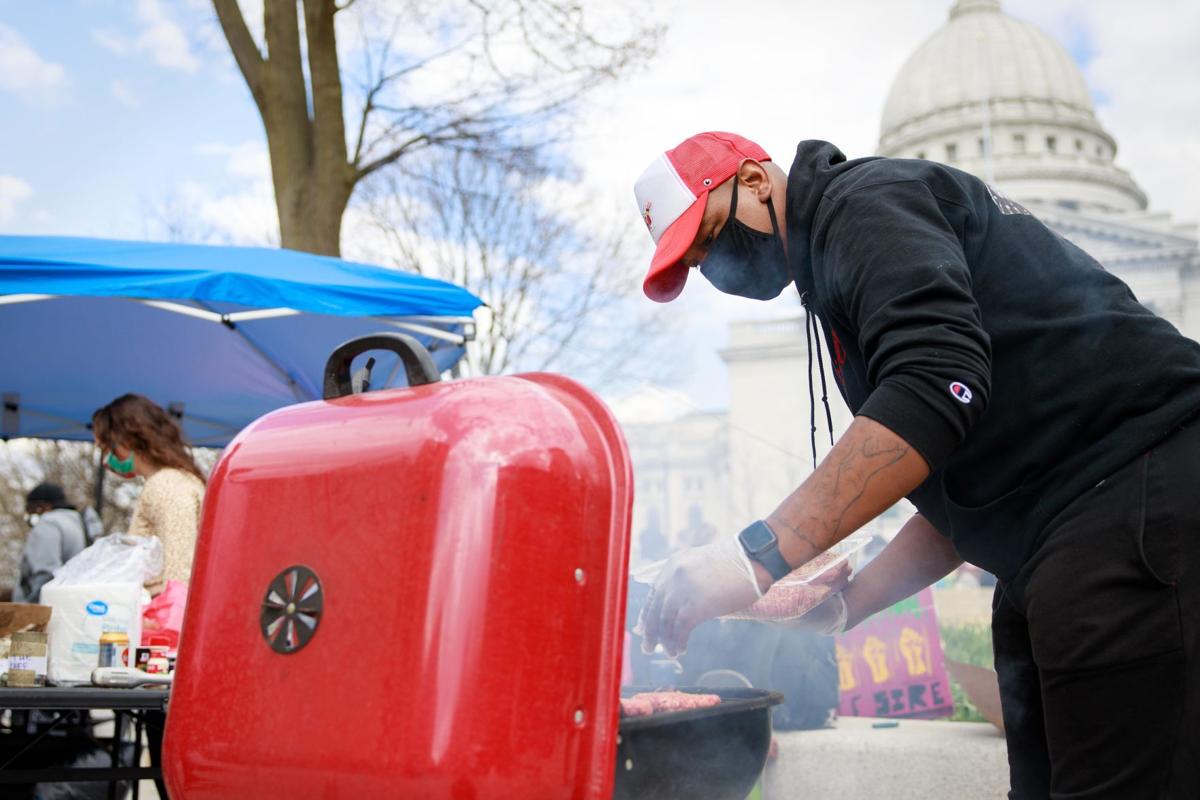 Darin Hicks, an organizer with Black Umbrella, cooks hamburgers on a grill so they can be handed out for free to demonstrators who marched for unity. Hicks says his group is "always taking care of our people."