MAUSTON — Cindy Kanarowski-Peterson thought she was set for the winter.

Steady rains over the summer and flooding had left much of the 252 acres of hay fields at her Red Ridge Ranch Riding Stable unusable and in some cases under water. So in late August, she and her husband, Lyle Peterson, purchased six semi-tractor trailer loads of hay and alfalfa from farms in South Dakota and Wyoming with the hope that it would be enough to make it through the first cutting of hay in June.

But what appeared to be a problem solved has turned into a heart-wrenching disaster.

A blister beetle, a bug that when crushed during harvest secrets a deadly toxin, is being blamed for the deaths of 14 of their beloved horses at Red Ridge. The beetles, typically not an issue for Wisconsin-grown hay, also sickened another 100 horses on the ranch and has the couple scouring the region for new sources of hay to keep their 110 horses fed. At some point they’ll likely be looking for an attorney.

Blankets, once worn for warmth by the now-dead horses, hung on a fence last week in effort to air them out, but they also served as a cold and painful reminder of the equines who began dying shortly after Labor Day. The Belgian, Mustang, Appaloosa, Percheron and other breeds sported names like Jill, Bell, Leo, Brown Beauty, Elvira and Breeze. Sir Bob the 4th, Charlie and Talley are gone, too, along with Little Nick. Big Nick died Jan. 3.

“I need to get rid of them,” Kanarowski-Peterson said of the blankets. “It’s just sickening that we’ve had to go through this.”

Kanarowski-Peterson is now trying to bring awareness to other ranchers about blister beetles, and she’s launched a Go Fund Me campaign with a goal of $50,000 to help cover the costs of buying new hay and paying for veterinarian bills. While insurance would cover the loss of harvested hay due to a fire or tornado, the ranch’s insurance policy does not cover blister beetles. A $5,000 load of hay arrived Friday, but they passed on a load they looked at on Thursday that was for sale near Westfield for $150 per bale, which are 3 feet high, 3 feet wide and 8 feet long. The $40,000 worth of hay purchased this fall from farms out west cost about half of what it would cost to buy the hay now in Wisconsin.

“We thought we were doing the right thing,” Kanarowski-Peterson said. “That was the better deal we thought. But not after 14 dead horses.”

As of Saturday, 408 people have donated nearly $21,000 to the online campaign, while other donations have come in from both longtime customers and those who have never mounted a horse or taken a wagon or sleigh ride on the sprawling ranch located along Highway 82 just north of the Lemonweir River.

Rick Short, a longtime friend of Kanarowski-Peterson and her husband, stopped by on Thursday to donate $100 and to drop off a $500 check from one of his neighbors, a frequent customer who rode Talley, one of the horses that died.

“Everyone out here can’t believe it. It’s just one of those wild things,” Short said from the seat of his pickup truck as it idled in the driveway of the ranch. “Who would have thought it would have been from little bugs.”

According to PJ Liesch, director of the UW-Madison Insect Diagnostic Lab, blister beetles comprise an entire family of beetles that can be found worldwide. There are around 400 species in North America, including almost 30 species in Wisconsin that aren’t typically on hay and alfalfa during harvest. In general, Liesch said, blister beetles are oblong, not particularly hard or crunchy, with somewhat softer exoskeletons, similar to fireflies.

“In the grand scheme of things, blister beetles are not uncommon in Wisconsin. However, they are rarely an issue in hay,” Liesch wrote Friday in an e-mail to the Wisconsin State Journal. “In my nearly six years as director of the UW Insect Diagnostic Lab, the recent incident in the state is the only time I’ve encountered an issue with horses and blister beetles. Having multiple horses die is an unusual occurrence.”

Dr. Dave Kolb, an equine veterinarian with Lodi Veterinary Care, one of the largest veterinary clinics in the state, said this is the first time in his 32-year career that he has dealt with the deaths of horses from blister beetles. Kolb, who performed necropsies on two of the horses at Red Ridge, said that when blister beetles are ingested by horses (cows are less affected) the toxin, called cantharidin, is “very irritating” to the linings of the stomach and intestines. Kolb said that the beetles in the hay were likely crushed by harvesting machinery, but the cantharidin remains toxic on the hay. Adding to the problem is that horses are unable to vomit to clear their systems.

“Both of (the horses necropsied) had holes in (their stomachs) and that’s what causes the death,” said Kolb, who believes the surviving horses have a good shot at recovering. “The GI system and kidneys are affected, but with time the lesions are going to heal up and the kidneys should get back to normal as well.”

Kanarowski-Peterson initially thought the first cases were just colic. But as the problems grew she considered it to be bad grain and then thought it was worms. Her surviving horses are now getting a mineral lick supplement to help them recover, heal from the inside out and gain weight that was lost over the last four months.

Red Ridge — located just west of Woodside Sports Complex, which hosts youth baseball, softball, soccer and other sporting events — opened 20 years ago with 10 horses and 20 acres of land. Kanarowski-Peterson, 51, a graduate of Mauston High School, has been riding horses since she was 2 years old, and her mother used to trick ride. Kanarowski-Peterson started the ranch as a way to have her own horses. She competes in barrel racing, along with a sister who also trains and sells barrel horses, while two other sisters are also into horses.

At Red Ridge, Kanarowski-Peterson and her husband make their livelihood offering up year-round trail rides to the tourists that flock from around the country to nearby Wisconsin Dells. Muscovy ducks waddle around the ranch, chickens cluck, roosters crow and the cats romp and play, but the horses are the draw here, along with Bonnie, the lone mule.

“I love horses,” Kanarowski-Peterson said. “It doesn’t matter what breed, what color, what size. I love them all, but I don’t know if I can ever begin to replace what I lost.” 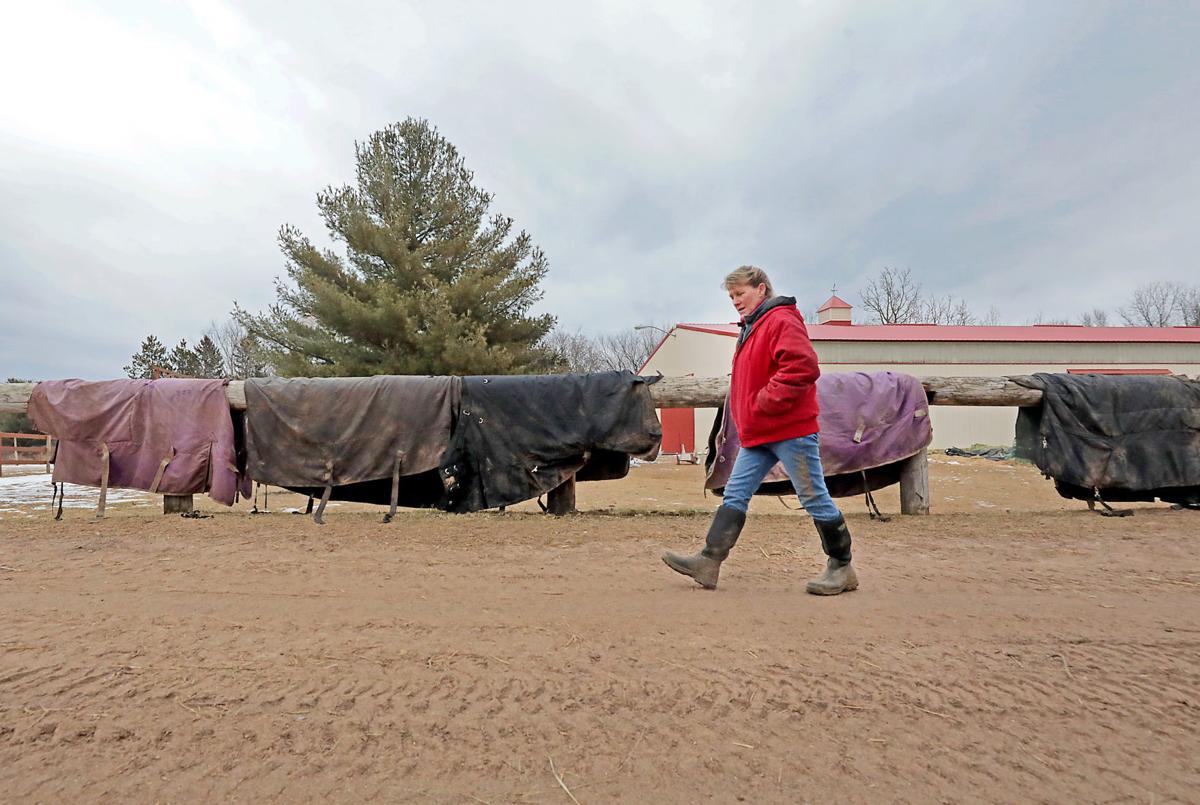 Horse blankets were draped last week over a fence at Red Ridge Ranch Riding Stable near Mauston. The blankets, once worn by some of the 14 horses who died over the last four months from eating toxic hay purchased from South Dakota and Wyoming, were being aired out by Cindy Kanarowski-Peterson, who owns the ranch along with her husband, Lyle Peterson. "Our winter hay is a total loss and we are left with a barn full of poisonous hay," Kanarowski-Peterson said. 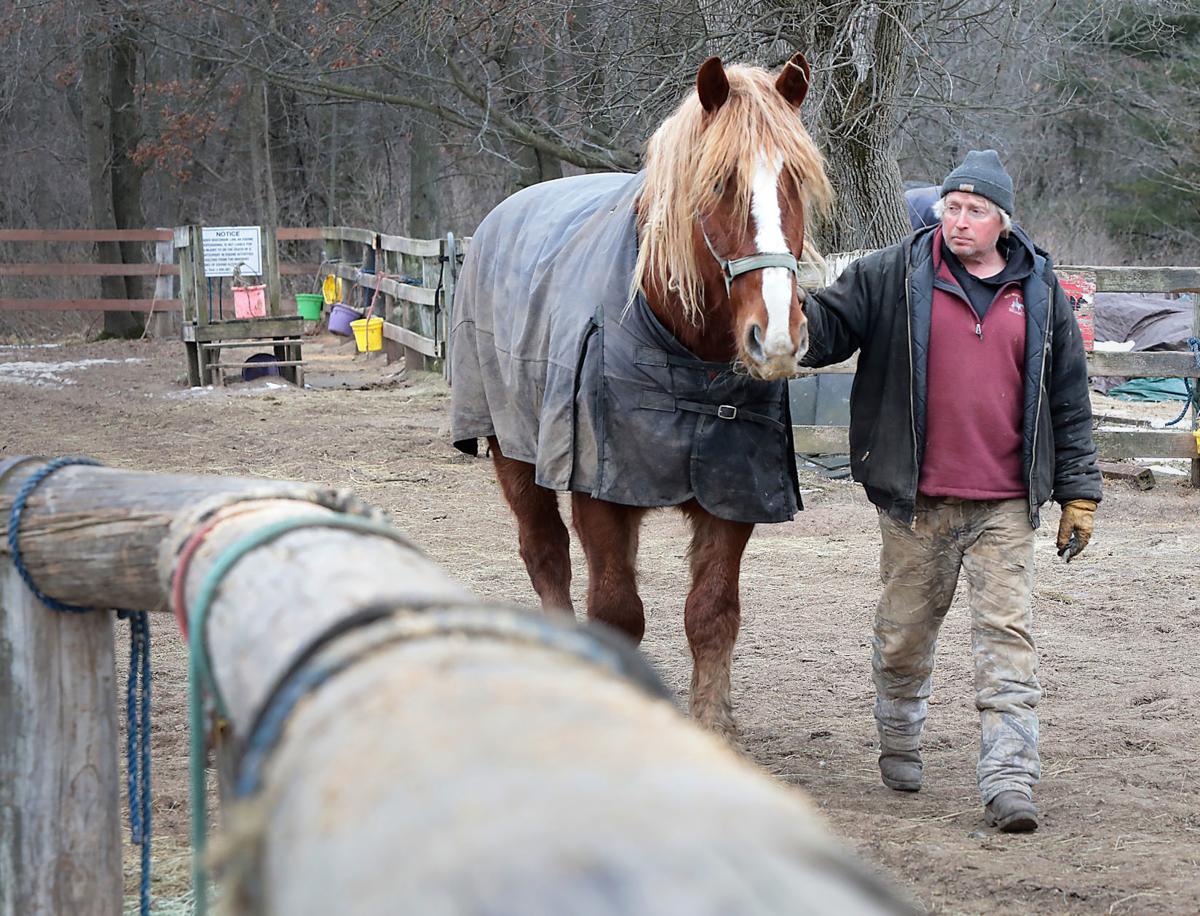 Lyle Peterson leads Trump, a Belgian horse at Red Ridge Ranch Riding Stable that survived an influx of hay contaminated from toxic blister beetles. Of the surviving 110 horses, 100 were sickened. 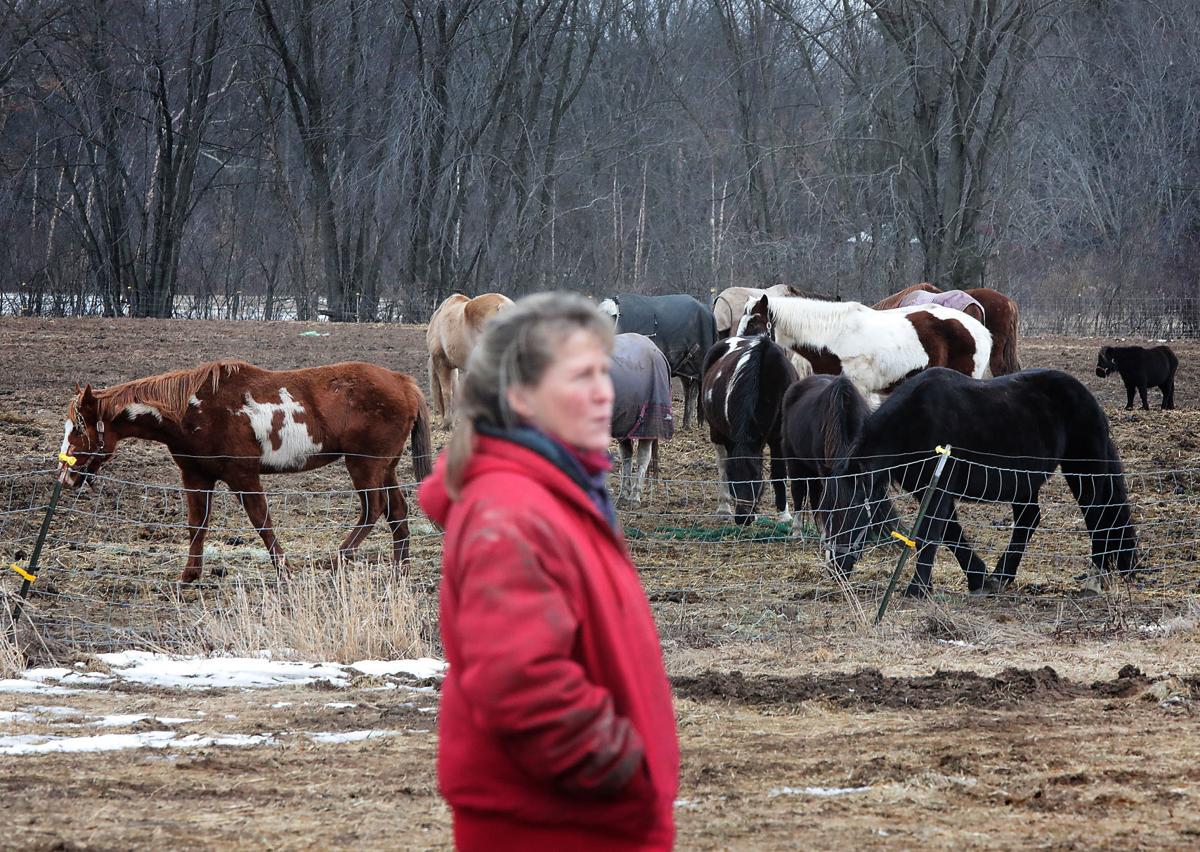 Cindy Kanarowski-Peterson has been riding horses since she was 2 years old and has had her own ranch for 20 years, but has never endured the death of 14 horses from toxic hay. She's now trying to heal her remaining herd and is trying to bring awareness about the potential problems of buying hay from Wyoming and South Dakota. 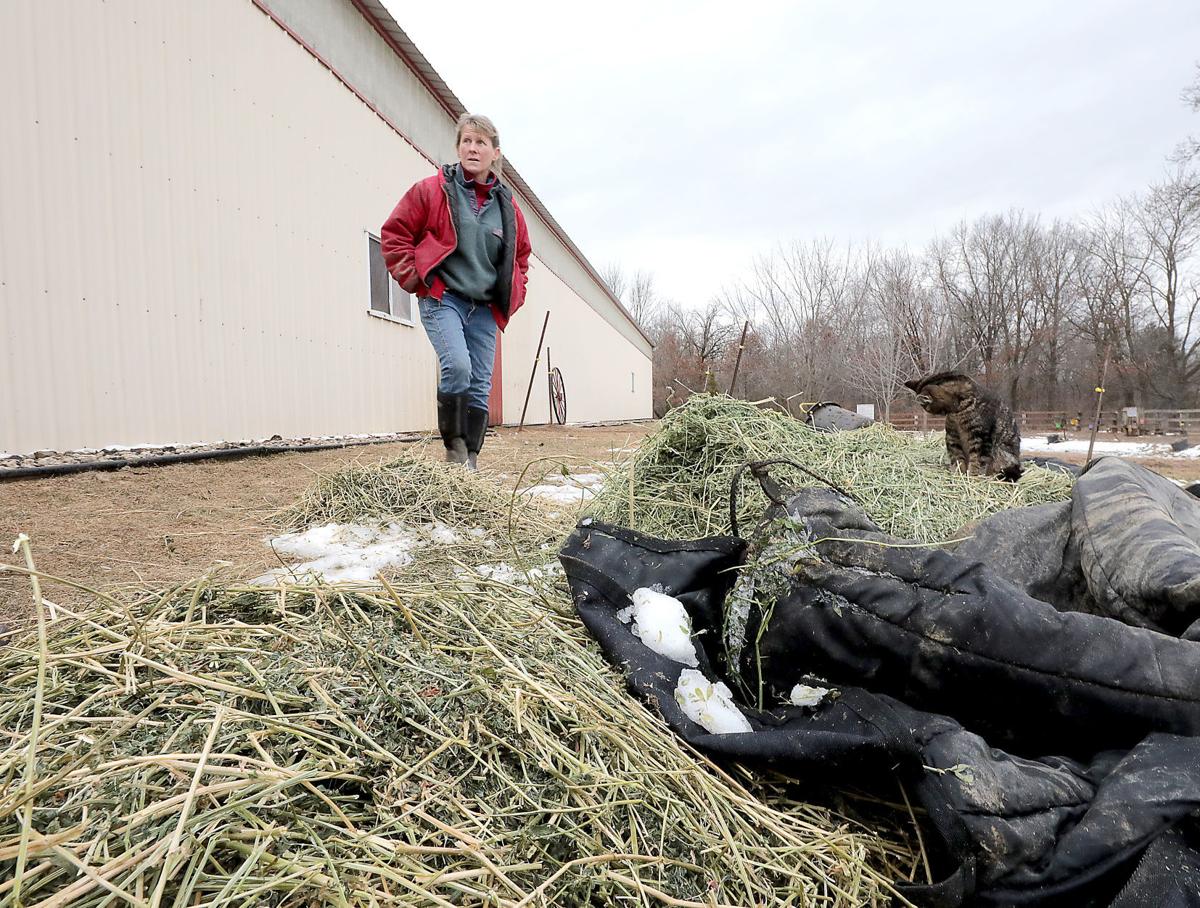 This pile of hay was among six loads of hay purchased from farmers in South Dakota and Wyoming that was contaminated by blister beetles, which when crushed during the harvest, secrete a toxin that can be deadly to horses. 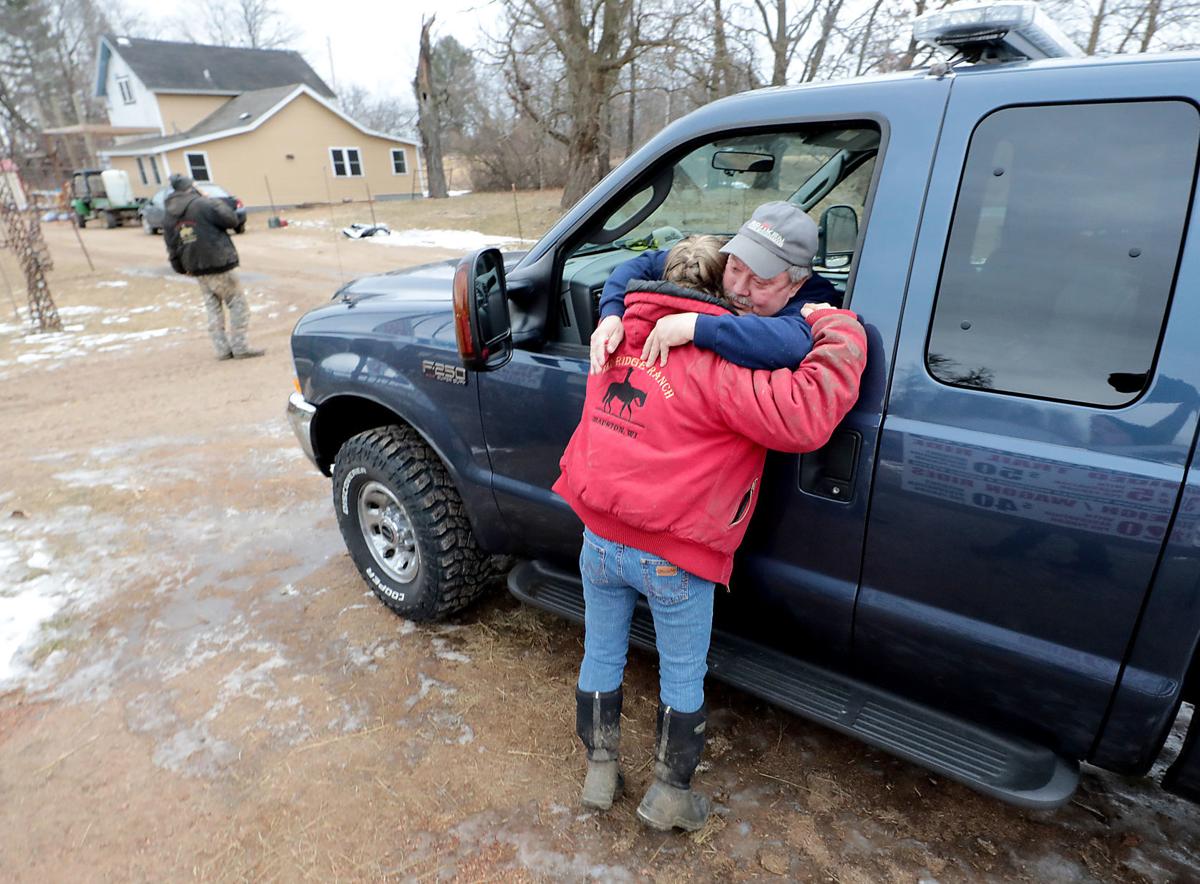 The outpouring of support has been overwhelming for Cindy Kanarowski-Peterson, seen here with longtime friend Rick Short, who was dropping off a $100 donation and another $500 check from a neighbor to help the ranch purchase hay. 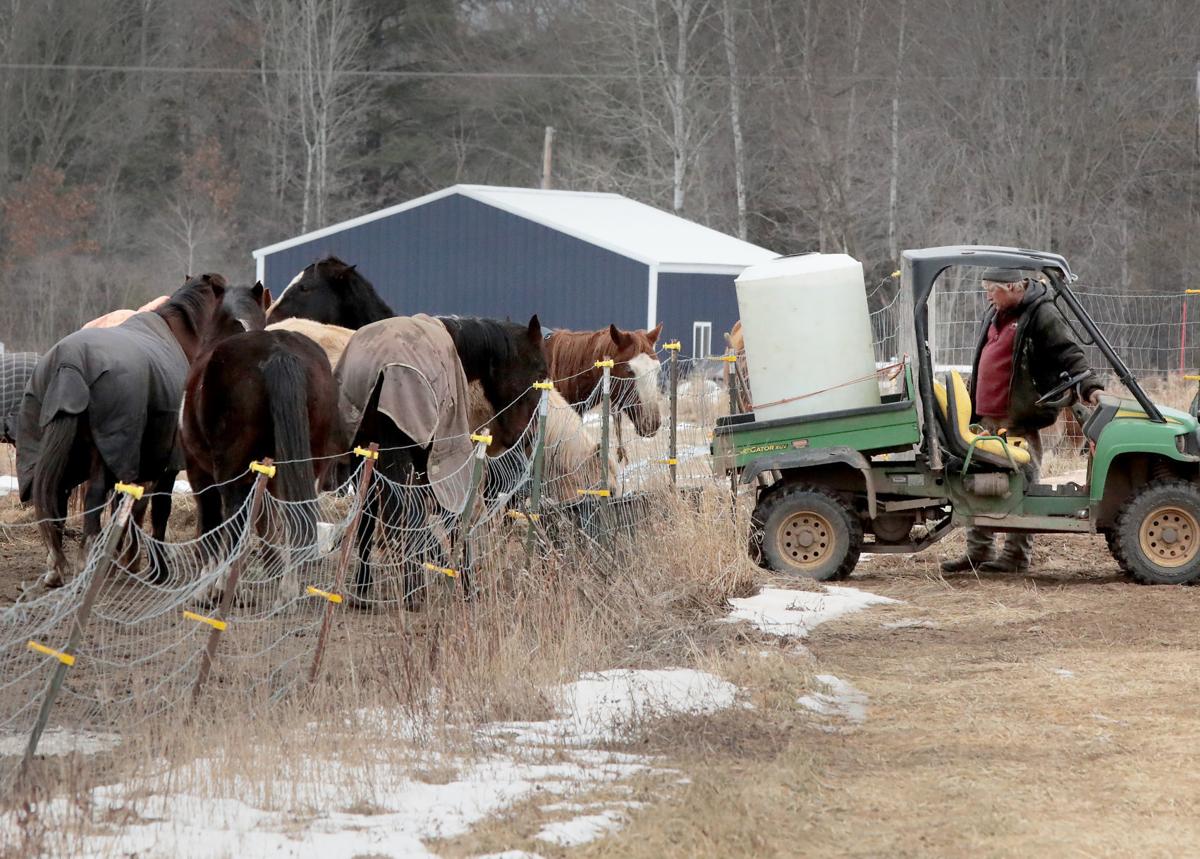 Horses at Red Ridge Ranch Riding Stable near Mauston are on the mend after being sickened by toxic blister beetles that contaminated loads of hay purchased from out-of-state vendors. 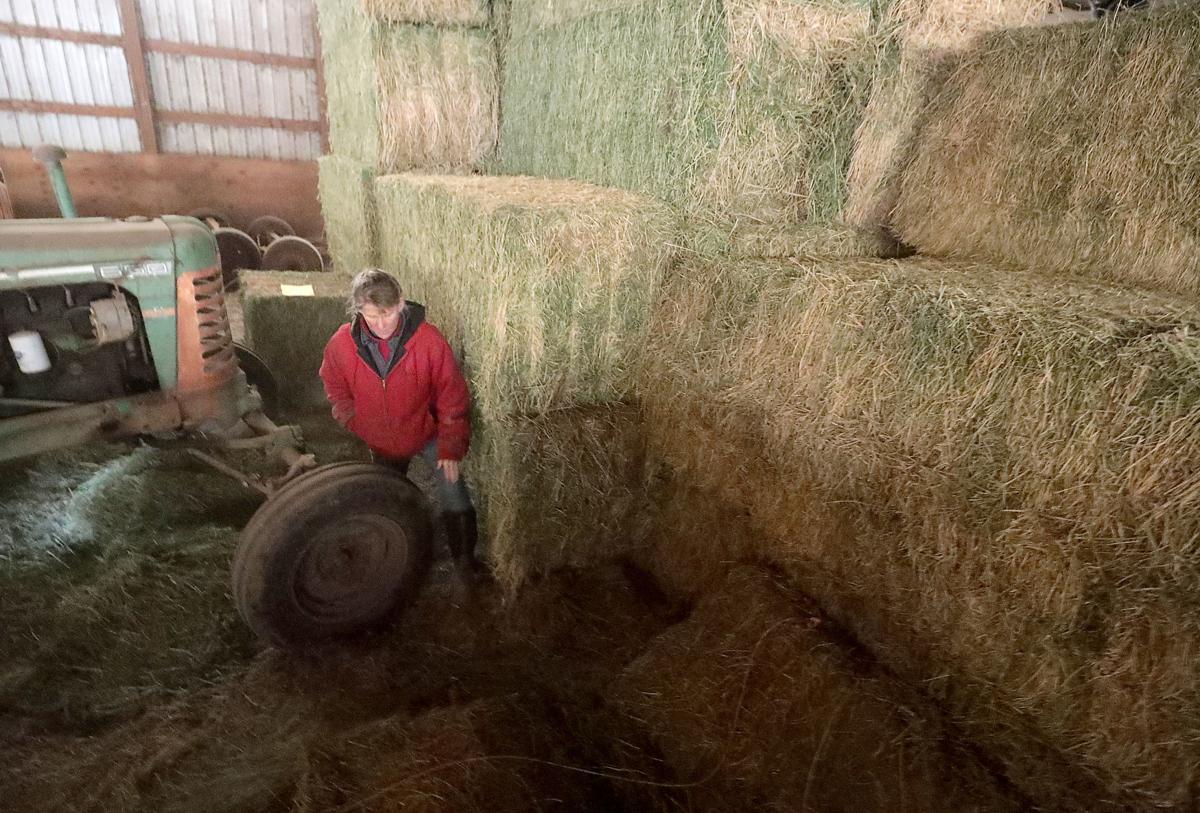 These large bales of hay are useless for Cindy Kanarowski-Peterson, who had 14 horses die from the toxic hay. She's now looking for other sources of hay to get her 110 horses through the winter. 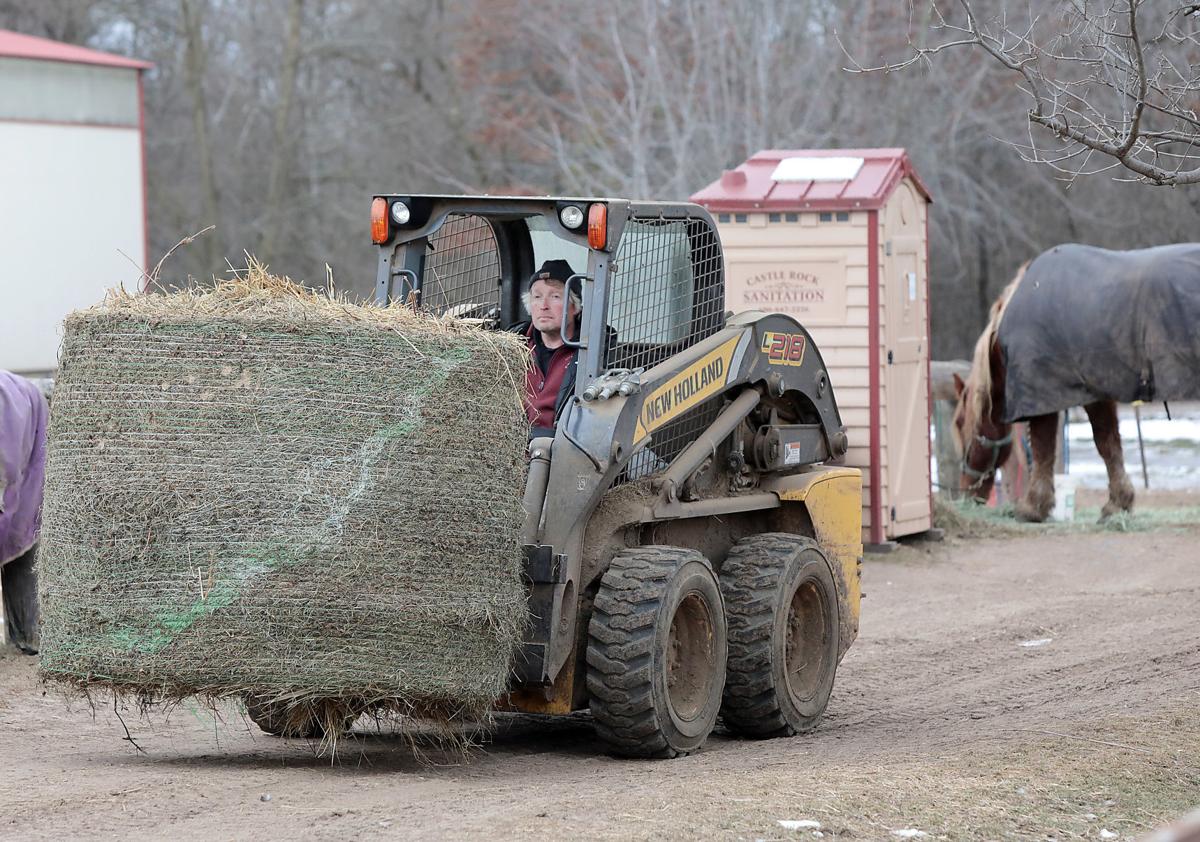 Lyle Peterson moves one of the few good bales of hay at Red Ridge Ranch Riding Stable. It was grown on the 355-acre ranch, but most of the 2019 crop was hampered by rains and floods, forcing the ranch to purchase hay elsewhere.