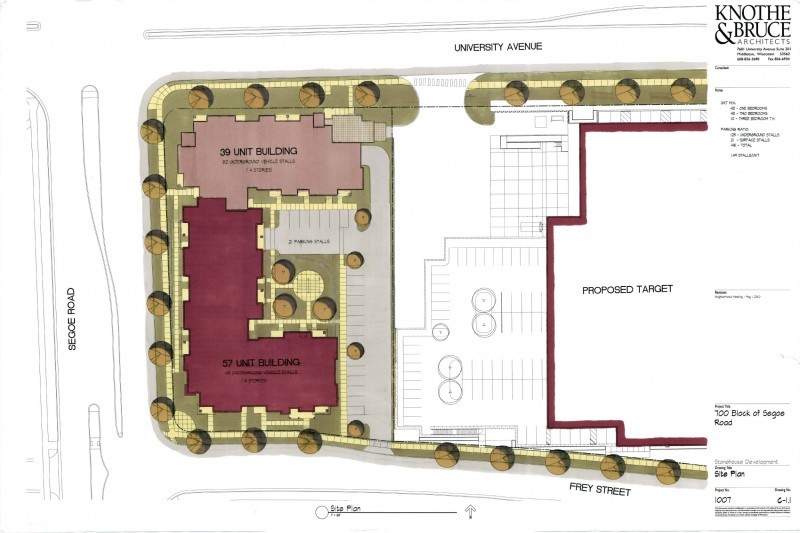 Looks like the people of Shorewood Hills may have hundreds of renters as new neighbors after all.

The village board on Feb. 15 voted down a proposed 69-unit apartment building, amid concerns that there wasn't enough time to study the impact it would have on the character of the wealthy, mostly owner-occupied enclave.

But now a new developer wants to build a 96-unit apartment house right across University Avenue in the city of Madison, where neighbors thus far have been receptive.

On Wednesday, Madison's Urban Design Commission is scheduled to hear a presentation from Stone House Development, which hopes to build under the same state financing program for affordable housing as the failed village proposal.

Bill Thomas, Shorewood Hills resident who favored the proposal to put apartments on the Pyare Square property in the village, said it made him laugh when he heard about the Madison proposal.

"People were scared to death to have the unwashed - the renters - in the village," Thomas said. "Well now the apartment people are just across the street for crying out loud."

Village board member Tim Rikkers said in December that he didn't want a large influx of "transient" renters on the village voting rolls because they would have "different values - I'm not saying bad values - but different values from what we have here... People who live here are in for the long haul."

Rikkers said last week that he received harsh criticism for his statements, but that he stood by them because he believes that renters might vote against things such as street improvements that could be in the long-term interest of the village.

"It had nothing to do with the type of person" who rents, he said.

Rikkers said he likes the current proposal for apartments on the other side of University Drive in Madison.

"I think it's a good thing," Rikkers said. "The area is a good area for apartments."

Village President Mark Sundquist, who was at the lonely end of the 6-1 vote killing project, said myths played a role in the decision.

"This is a delicate subject, and part of it is that people don't understand the difference between Section 42 and Section 8," Sundquist said. Section 8 involves subsidies that allow low-income people to pay for apartments. The proposal in the village, as well as the one now pending in the city, in which the developer receives financing in exchange for keeping rents low enough for moderate income renters, those who make no more than 60 percent of the median income in the county. The Madison proposal is also under Section 42.

Rich Arnesen of Stone House Development said rents would range from $600 dollars to $975 in the two four-story buildings he hopes to build on 1.3 acres at University, Segoe and Frey.

"It will have nice views of Downtown and Shorewood Hills and the (Blackhawk Country Club) golf course, Arnesen said.

Section 42 financing is awarded on a competitive basis, so there's no guarantee the project will be one of those approved later this month, Arnesen said.

Ald. Chris Schmidt, whose District 11 includes the site in the Hilldale shopping center, said that although his constituents have had the usual questions about the impact of traffic, he's heard no major objections.

Sundquist said some of the objections in Shorewood Hills might be traced to the fact that the developer was from out of state.

"Stone House is local and they have a good track record," Sundquist said.

There were a lot of unanswered questions about the impact an apartment complex would have on police and fire services and other parts of the village government, he said.

"A few people would say it's a missed opportunity, but it's tricky because we didn't have all the information," Sundquist said.

Before the proposal was rejected, officials ordered an impact study from the Vierbicher consulting firm.

A link to their study, dated May 5, is included in the village's online newsletter for the month of June.

It found no serious financial impact to the apartment project that had been proposed for the nearly vacant Pyare Square building by Andover Hill Investments of Warrenville, Ill.

The consultants said national studies indicated that Section 42 units almost always have a positive impact on surrounding property values and that police calls to apartment buildings would be expected to be lower per unit than the village's current rate.

An analysis of multifamily residential property on emergency services revealed that EMS and fire calls would likely be proportional to existing call levels for village residential, while police calls for rental multifamily housing would probably be lower than the existing per-unit levels in the village.

"The primary reason is that the village has a large number of police calls relating to suspicious persons/suspicious vehicles and pet disturbances, which are less likely to occur in a multifamily setting," the village newsletter said in a summary of the consultant report.