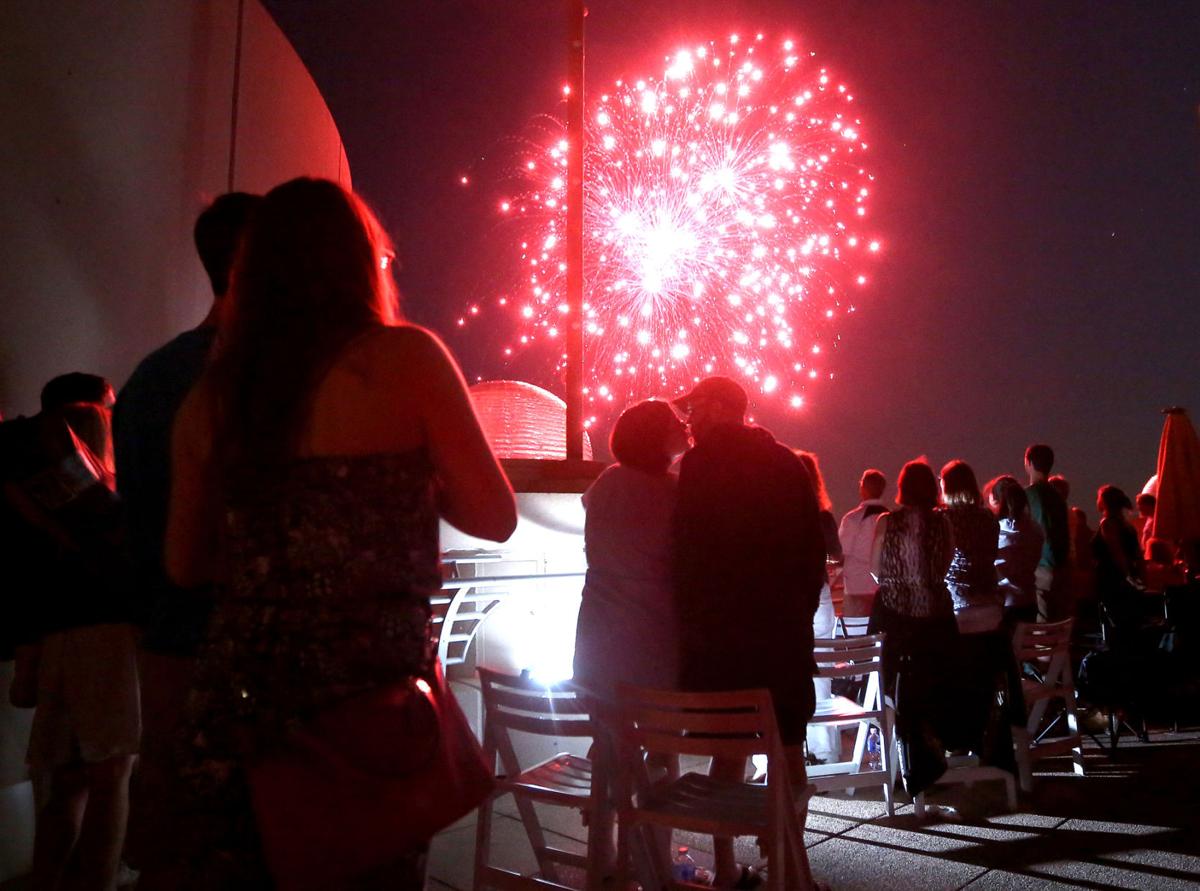 Spectators gather atop Monona Terrace to watch the fireworks show at the Festival Foods Shake the Lake event June 27. 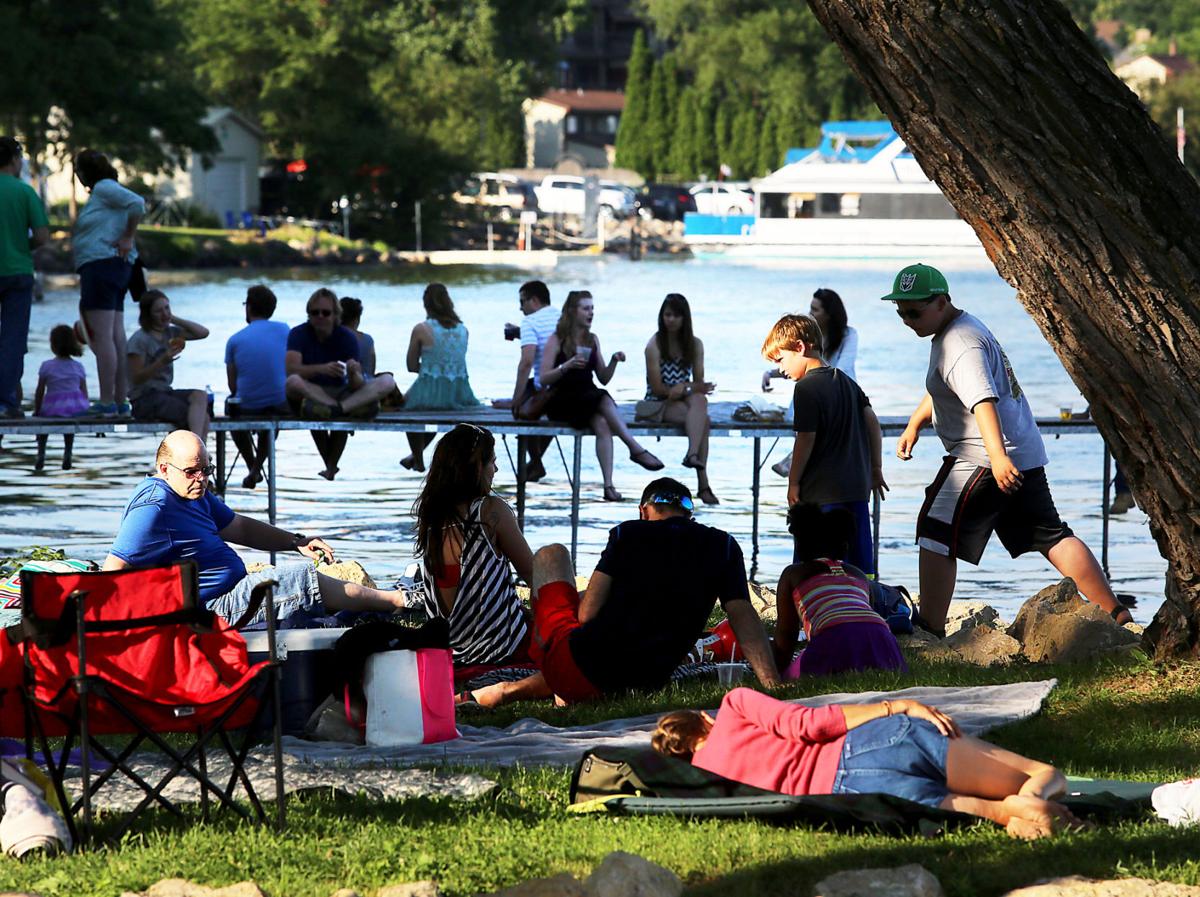 Early arrivers to the Festival Foods' Shake the Lake event stake out their spots for the event's evening fireworks on the shores of Lake Monona June 27. 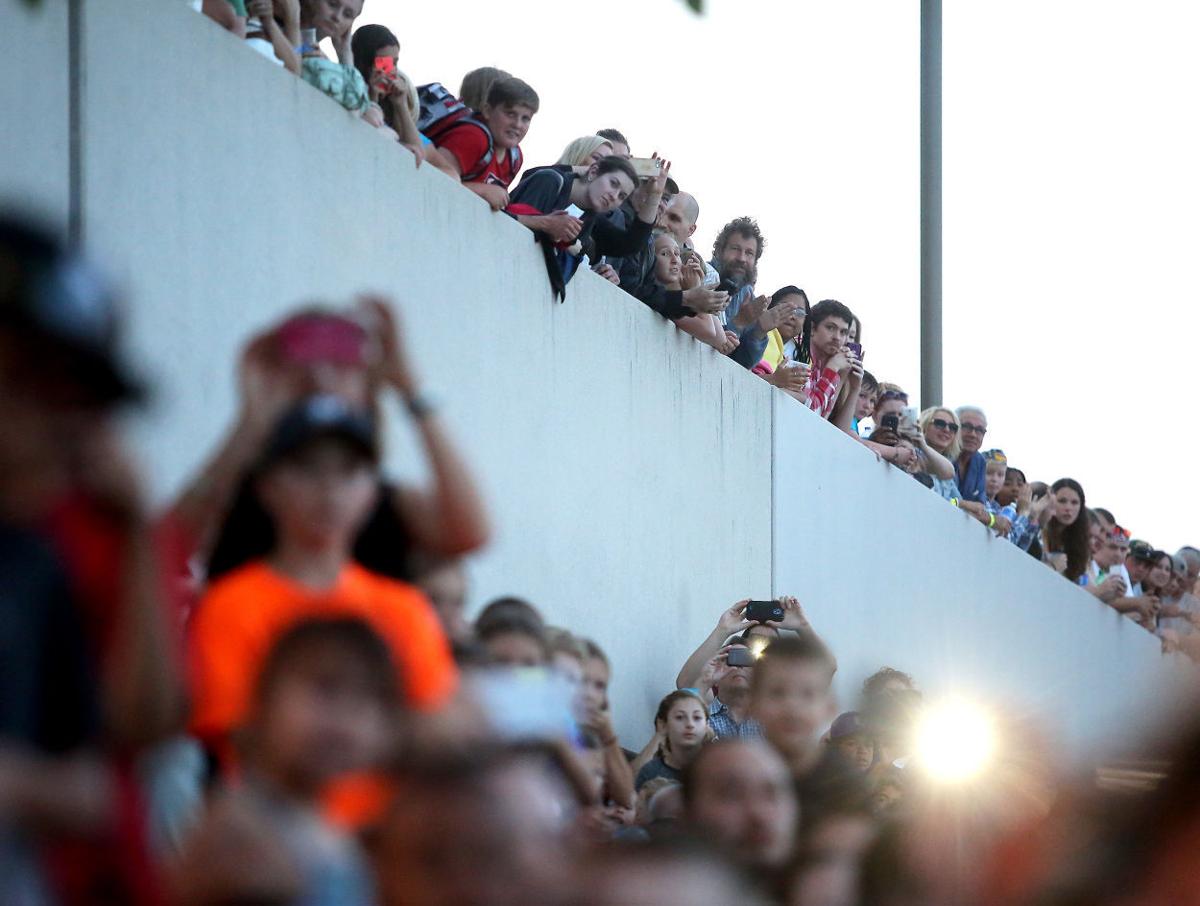 Spectators on hand to see David 'The Bullet" Smith, Jr.'s human cannonball act gather along the shore of Lake Monona during the Festival Foods Shake the Lake event June 27.

Shake the Lake was no dud.

Public agencies, sponsors and organizers of the first Shake the Lake fireworks display over Lake Monona in June have declared the condensed event an overwhelming success, a reversal of fortune rewarded with promises of a better show in 2016.

Shaking off the traditions of the old Rhythm and Booms show that graced Warner Park and Lake Mendota for many years, Shake the Lake appears to have met the initial challenge of wowing the public with a shorter show. Police estimated the spectator total at 75,000.

This year’s event featured fireworks by Spectrum Pyrotechnics of Reeseville, a human cannonball propelled into the lake, and other, less explosive, musical entertainment. The public was advised in advance of where the best viewing spots around Lake Monona would be, based on consultations with the fireworks vendor, said Conor Caloia of the Mallards.

“We worked with them to get the trajectories and flight plans of the fireworks,” said Caloia, adding the organization then put out a map of good and bad spots.

“We learned you can have a large event Downtown and get a crowd in and out safely and securely,” he said.

Madison police expect to bill the Mallards for up to $15,000 in city costs, said Capt. Carl Gloede, noting the reduced scope of the annual event helped keep costs down. The previous year, the police billed for an extra $65,000, he said.

“No city funding was budgeted for the event,” said Katie Crawley of the mayor’s office, adding that “generally, things went incredibly well.”

Crawley and Caloia said better coordination with parking garages next year was in the plans.

“It was a safe, free, family-friendly event, and thousands of people had a great time,” Crawley said.

“The condensed event area, condensed hours, made for a compact show and helped immensely in cost and in keeping down the amount of street closures and barriers,” said Gloede, who praised the Mallards for good planning.

Logistical flaws were quickly resolved, he said, and there were only three (temporarily) lost children.

One thing didn’t change. Boat traffic was pretty much as expected: slow. But the general behavior of boaters was praised by Dane County Sheriff’s Office Sgt. John Brogan, of the lakes patrol, which had four boats on Lake Monona.

“Well behaved, good crowd out there, very few incidents,” said Brogan, noting a huge backup going down the channel between lakes. The patrol is recommending that the fireworks barges use bigger buoys next year to keep curious boaters away in advance of the show, he said.

Arlt, of Festival, said feedback was “overwhelmingly positive.” With more time to plan for 2016, he expects the show to be “more artistic,” with more entertainment options. Festival Foods sponsors 16 fireworks shows in Wisconsin — four in municipalities with connections to the Madison Mallards — with Madison the biggest. The cost, said Arlt, “is not a number we share.”

The Mallards sold 2,500 tickets at $15 each for prime viewing spots on Monona Terrace, with the money going to cover costs, said Caloia.

Rhythm & Booms, the Warner Park staple that annually attracted hundreds of thousands to the Northeast Side park, often for an entire weekend, was run by Madison Festivals, which had estimated costs of between $300,000 and $500,000. It relinquished control of the annual event after the public and sponsors did not respond to pleas for support and the city decided not to continue a $100,000 donation. It sputtered through its finale and exited after the move from Warner to Lake Monona in 2014.

Caloia credited the success this year in part to examining the negatives from 2014, which led to reducing hours and space. The tradition of charitable donations was streamlined this year, too. Organizers designated the Madison Parks Foundation as the nonprofit recipient of a yet-to-be determined donation.

Foundation director Stephanie Franklin said the city’s 266 parks will be the beneficiaries of that donation.

Shake the Lake makes a strong case as a mainstay

After two consecutive successful years, it appears that the revamped fireworks festivities are here to stay.

Spectators gather atop Monona Terrace to watch the fireworks show at the Festival Foods Shake the Lake event June 27.

Early arrivers to the Festival Foods' Shake the Lake event stake out their spots for the event's evening fireworks on the shores of Lake Monona June 27.

Spectators on hand to see David 'The Bullet" Smith, Jr.'s human cannonball act gather along the shore of Lake Monona during the Festival Foods Shake the Lake event June 27.