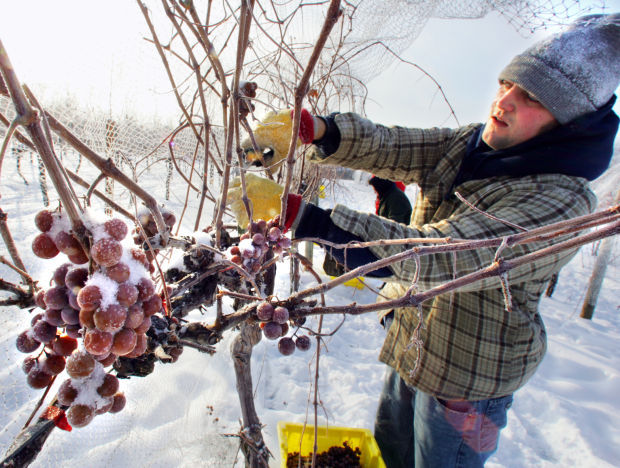 A Wollersheim Winery employee picks frozen St. Pepin grapes to be crushed for the winery's ice wine that Wollersheim winemaker Philippe Coquard described as "a cross between honey, maple syrup and apple cider with 10 times the complexity of those products in terms of essence." 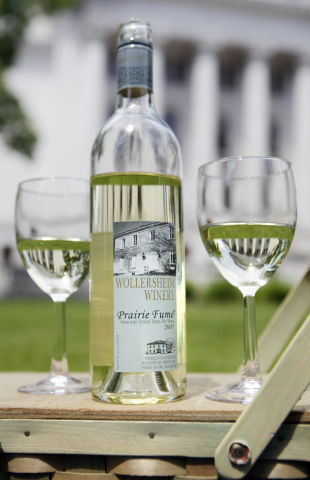 Wollersheim Winery's Prairie Fume is the best-selling wine for the No. 1 wine producer in Wisconsin. 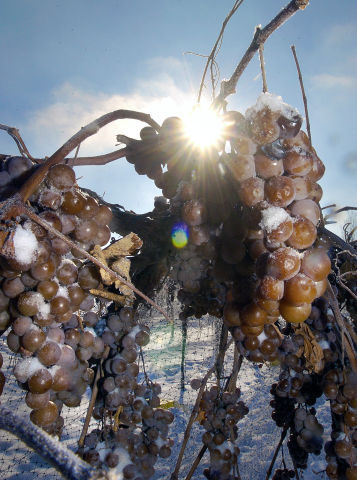 St. Pepin grapes that Wollersheim Winery in Prairie du Sac uses to make its popular ice wine are an American hybrid suited to the Wisconsin climate that some believe could be a key to the growth of the state wine industry.

Selecting a Wisconsin-produced wine never crossed Laura Morland’s mind after she walked into a West Side liquor store Wednesday morning to buy wine for her family’s Thanksgiving celebration.

Morland purchased a Pinot Gris as a salad wine, a Red Zinfandel for the main course and two more Red Zins for evening wines. All came from California wineries and were recommended to her by Liquor Town owner Dane Hendricks.

“When I think of Wisconsin wines, I think of fruity wines. That won’t work with what I need,” said Morland, who lives in the town of Perry.

Morland falls in line with the majority of Wisconsin wine drinkers, who avoid most of the stuff made from state wineries despite attempts to turn it into a niche market like the state’s widely popular artisan cheeses and craft beers.

A report from the state Department of Revenue showed that just 5.3 percent of the taxable liters of wine prepared and bottled for sale in the state in 2012 came from state wineries.

The report also showed that 31 percent of the wine prepared and bottled by in-state wineries for sale in Wisconsin came from one place: Wollersheim Winery in Prairie du Sac.

Those numbers are similar to those from 2009 despite the fact that 28 percent more wine was prepared for sale in Wisconsin by in-state wineries in 2012 compared to 2009, according to the report.

That goes against the beliefs of some state wine makers and their loyalists who believe a good marketing campaign and the state’s grass-roots history with cooperatives will help the state wine industry take off.

That was the gist of a paper showcasing the state’s two wine cooperatives by two East Coast consultants that was presented at Princeton University in 2012 and at a Cyprus conference earlier this year.

But Peter Botham, co-owner of Botham Vineyards and Wineries LLC, Barneveld, took what he said as a more realistic view of why in-state wine doesn’t sell.

“Most state wines just aren’t any good,” he said.

Botham added that he rarely encounters a state wine that is even remotely well-crafted. “Some of it, I can’t believe people put in a bottle and put it on a shelf,” he said. “I’m astounded sometimes by how bad some of this stuff is that people are willing to sell with their name on it.”

The biggest exception are the wines made by Wollersheim, especially its widely popular Prairie Fume, a semi-dry white, and a new Dry Riesling, Botham said.

Hendricks said Prairie Fume is the top wine seller by a 3-to-1 margin at Liquor Town, which is located on Williamsburg Way.

“They have a mystique,” Hendricks said of Wollersheim, which regularly wins awards for its wines and tours.

It’s also the top seller “by far” at the Hy-Vee store on Whitney Way that has devoted 20 feet of shelving space to 125 in-state wines and an equal amount of space for Wollersheim products, according to liquor and wine manager Mike May.

At Liquor Town, the in-state wines with catchy names that showcase their fruity flavors like Cranbernet, Panachea Peach and Sassy Sangria sit on the shelves and gather dust, Hendricks said.

“Everything is so sweet that you alienate the mainstream,” said Hendricks, who has owned Liquor Town since 1984 and is the store’s wine buyer. “The wine buyer wants California dry red wines, and Wisconsin wine-makers’ hands are tied because they can’t grow the grapes that make those wines.”

Wisconsin’s wineries that produce dry red wines use French hybrid grapes that rarely ever fully ripen because the state’s growing season is too short, Botham said. Thus, the state’s dry red wines have a flavor profile that reminds him of vegetables.

“I’m not saying it’s bad. It’s an acquired taste,” said Botham, who grows French hybrid grapes on his vineyard. “Some people try to mask it with oak and that doesn’t work, either. It’s like biting into a tree.”

Wollersheim’s Prairie Fume and Botham’s Dry Riesling are some of many state wines that come from white grapes imported from out-of-state vineyards but are produced in-house. They are among the few wineries in the state that make more than 25,000 gallons of wine each year and work strictly with wholesalers to distribute their products.

Using out-of-state grapes goes against the policies of the state’s two wine cooperatives. Their members are all small wineries and the co-ops help them succeed while following the state-imposed three-tier system more economically.

Pennsylvania consultant Carol Coren and Southern New Hampshire business professor Christina Clamp co-authored the paper presented at Princeton and Cyprus that said the state wine industry will grow with the help of the cooperatives.

“Wisconsin has done more in terms of intelligent application of the cooperative model than many other geographic locales in the world,” Coren said.

“I will argue with anyone who says they can’t make it without California grapes,” Jungwirth said.

A relatively new hybrid grape developed at the University of Minnesota and initially grown in Wisconsin that was created to thrive in a short growing season is helping the state wine industry turn the corner, Jungwirth said.

Wollersheim grows one of those hybrids, the St. Pepin, and uses it for its extremely popular ice wine that sells out every year, said Wollersheim co-owner Julie Coquard.

“There are some really good wines made from those grapes,” Coquard said. “I think that’s a big part of the state’s future. More of those grapes are being planted now.”

But some wine makers are making bad wine with the new hybrids because they don’t know what they’re doing or they are too eager to make it before they are ready, Jungwirth said.

“Our business is about quality, and they are looking for quantity. That won’t work,” he said.

So Botham reiterated that Wisconsin winemakers should put their primary focus on making better wine if they hope to grow the industry.

“A lot of the time, unfortunately, that gets reinforced because what they taste at some of these wineries is poorly crafted wines,” Botham added. “That makes the uphill climb even steeper.”

The latest public health order provides an exception for people to take off their masks in an enclosed space if they are all vaccinated.

A Wollersheim Winery employee picks frozen St. Pepin grapes to be crushed for the winery's ice wine that Wollersheim winemaker Philippe Coquard described as "a cross between honey, maple syrup and apple cider with 10 times the complexity of those products in terms of essence."

Wollersheim Winery's Prairie Fume is the best-selling wine for the No. 1 wine producer in Wisconsin.

St. Pepin grapes that Wollersheim Winery in Prairie du Sac uses to make its popular ice wine are an American hybrid suited to the Wisconsin climate that some believe could be a key to the growth of the state wine industry.