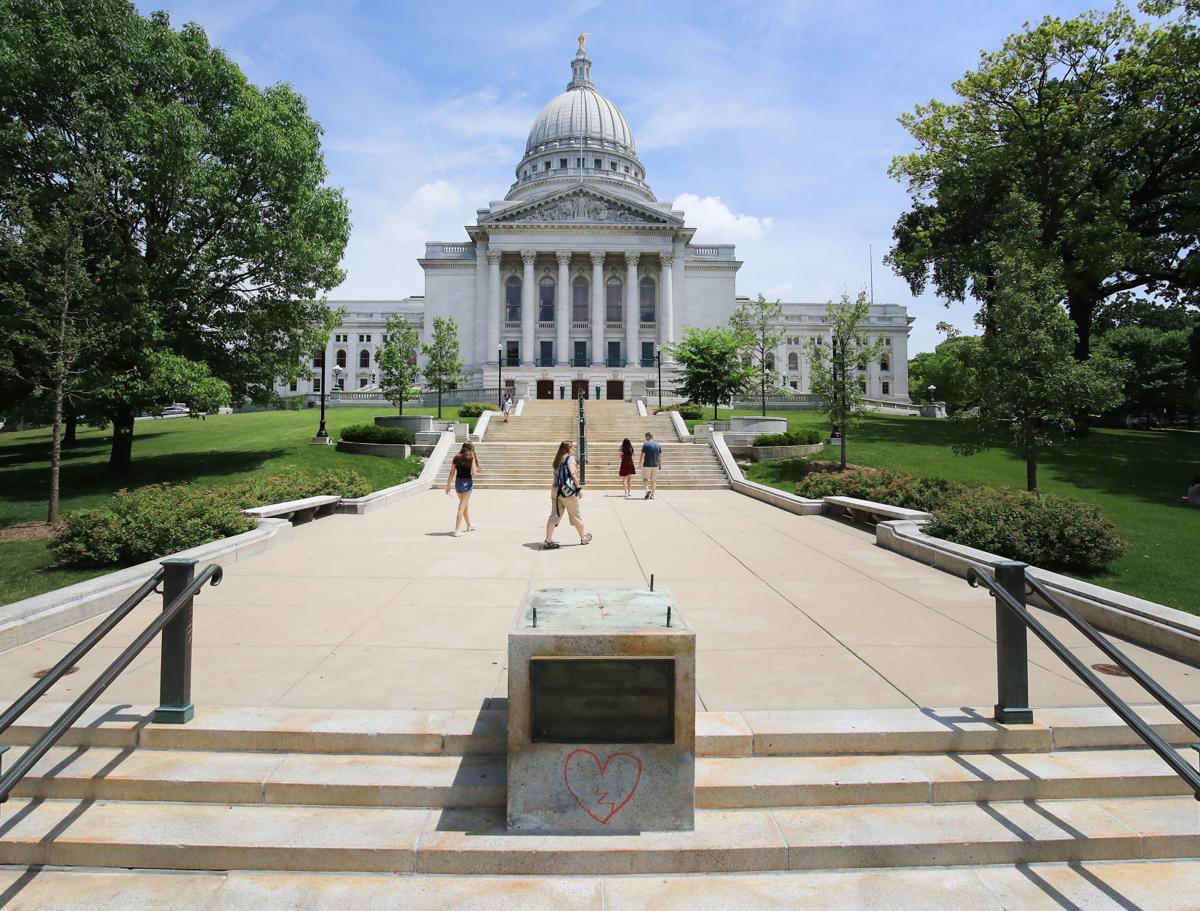 A bare pedestal is all that remains of Wisconsin's "Forward" statue after protesters tore it down June 23 along with a statue of Union Civil War Colonel Hans Christian Heg after the arrest of a local black activist for causing a disturbance in a nearby restaurant. 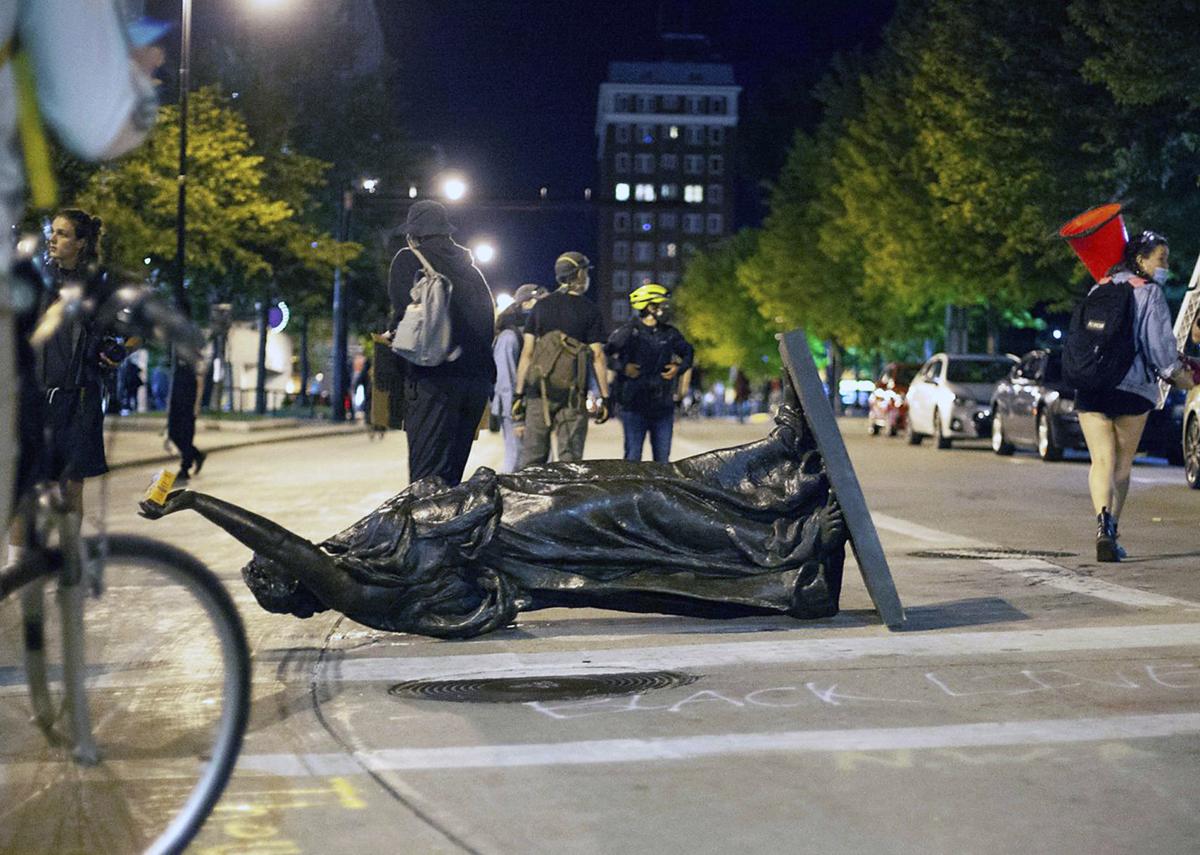 Wisconsin's "Forward" statue lies in the street on Capitol Square after it was pulled down by protesters on June 23.

Since demonstrators toppled the “Forward” and Col. Hans Christian Heg statues on the grounds of the state Capitol last week after the arrest of a local Black activist, community members have grappled with whether the art should be restored or replaced.

Some say the empty pedestals where the statues once stood are a sore sight, while others see them as a portent of change: As protests against police violence and racism continue to roil the city, they serve as a stark reminder of the conflict over the city’s ideals.

“Forward,” which has come to represent women’s rights and the state’s motto, and Heg, an immigrant Union Civil War colonel who died fighting to end slavery, were both torn down in what protesters said was a “strategic” move to bring attention to the state’s racial inequities.

Michael Johnson, president and CEO of the Boys & Girls Club of Dane County, has since proposed that state leaders erect a statue at the state Capitol honoring Vel Phillips, an African American activist and politician who marked many firsts for Wisconsin and the nation.

Brandi Grayson, founder and CEO of Urban Triage, which has been involved in many of the local protests, said she supports the proposal. Referencing Phillips’ legacy as a civil rights leader, she described her as “the epitome of Black womanhood.” Phillips, who was elected secretary of state in 1978, was the nation’s first Black woman elected to a statewide office.

Downtown Madison Inc. president Jason Ilstrup also backed the recommendation for a statue of Phillips, saying the organization would be supportive of more statues that honor diversity in the community.

But others differ on what should be done with the Capitol statues, and the process to install a new one is complex.

Johnson sent his request on Monday in a letter to state Sen. Fred Risser, D-Madison, who chairs the State Capitol Executive Residence Board, a bipartisan committee responsible for the maintenance and decoration of Capitol grounds.

The board’s policies restrict new plaques or monuments from being added to the Capitol without the removal of an existing one, according to state Rep. Amy Loudenbeck, R-Clinton, who is also a member of the board.

Protesters tore down "Forward", a statue on Capitol Square at the top of State Street.

In order for a new statue to be considered by the committee, she said Risser and the Department of Administration’s Division of Facilities Development and Management would need to add the topic to the board’s agenda. It must then be approved by the 16-person board.

Though Loudenbeck said she opposed permanently removing the “Forward” and Heg statues, she said she would be open to discussing adding a statue of Phillips with other board members.

‘Spitting on his grave’

In a guest column for the Wisconsin State Journal, UW-Madison emeritus history professor John Sharpless wrote that protesters who pulled down the Heg statue “were essentially spitting on his grave.” David Mollenhoff, a Madison historian and former member of the city’s Landmarks Commission, also disagreed with the protesters who brought down the statues.

“Clearly, the statues need to be restored and replaced on their pedestals,” he said, “and when they are, we should have a special program to note the ideals they were designed to capture.”

Mollenhoff further questioned protesters’ intentions to remove the statues, referencing their representation of anti-slavery and women’s suffrage. Tearing them down, he said, was antithetical to the Black Lives Matter movement.

An empty pedestal where the Forward statue once stood. Scenes from around the State Capitol Wednesday, June, 24, 2020 the morning after protes…

But even a statue with good intentions can still be problematic — especially when its backdrop is inconsistent with the sculpture’s message, say those involved in Black activism.

“While it was disheartening to see symbols of abolition and women’s suffrage at the state Capitol destroyed, neither of the statues were actually consistent with the diversity of our community,” said J.R. Sims, vice president of the 100 Black Men of Madison organization.

No artwork by Black artists is currently featured in the Capitol or on its surrounding grounds. According to the Smithsonian American Art Museum’s Inventory of American Sculpture database — which provides information on art by American artists in public and private collections worldwide — only three of 161 sculptures listed in Madison fall under the category of “African American.”

Bianca Gomez, a staff member of Freedom Inc., another group that has been involved in the local protests, said the lack of Black sculptures is telling of which people are deemed “worthy” of celebration and honor within the state.

“We don’t want another colonized statue or a statue of a white savior,” Gomez said. “We want a statue that represents our struggle for liberation, and if we’re committed as a community to supporting Black people, this is just one drop in the hat that could happen easily.”

Gomez said anger directed at protesters for tearing down the statues is misdirected.

The "Forward" statue is shown on Nov. 13, 1963, with the Wisconsin State Capitol in the background.

“People were more upset and outraged about these statues being torn down than they were about black bodies being torn down,” Gomez said. “I think we really have to assess what our priorities are and what we value because the statue represents a lot of things, but it’s a material object — it can be replaced. Black lives cannot be replaced.”

Still, objects can be powerful, according to Christian Overland, director and CEO of the Wisconsin Historical Society. He said statues can spark meaningful conversations that may make them worthy of preservation.

“Objects are history and objects have stories,” Overland said. “Taking care of objects like statues and restoring them allows people to have a dialogue about what has happened in history and what it means for us today.”

The Wisconsin Historical Society is currently working with the Department of Administration to restore the “Forward” and Heg statues, Overland said, but the State Capitol Executive Residence Board is responsible for making the final decision on whether they will return to Capitol Square.

Some community leaders, however, say Madison’s Black residents must have a say in the matter.

“Based on my experiences, most erected statues are placed without the benefit of extended thought or consideration of unintended ramifications,” Sims said. “To rely on the observations or recommendation of one person or group would do a disservice to all that merit consideration (of a statue) and to the residents of our state.”

As those in Madison and across the nation face a reckoning on racial inequity, he said state officials should recognize the contributions of Black Wisconsinites.

“It is high time that we as a state and a nation recognize and collectively celebrate the many contributions of African Americans and other people of color to our history and culture,” Sims said.

Gomez said a new statue should be the result of collective decision-making. Though Freedom Inc. would like to see a statue of a Black, queer, feminist at the Capitol, Gomez said “people power” comes first.

Who should have a statue in Madison?

The Wisconsin State Journal asked several local activists, community leaders and scholars who should have a statue on the Capitol Square. Only a few responded, and with only a couple of examples with a Wisconsin connection.

What Wisconsin figure or idea should be enshrined on the State Capitol grounds? Send your ideas to wsjopinion@madison.com.

Rena Yehuda Newman: Don't mourn for statues; imagine what can flourish in their place

Last week in Madison, Wisconsin, marchers took to the streets to protest the arrest of local organizer Yeshua Musa, who was violently detained…

Heat continuing for at least the next week for southern Wisconsin

Other than along the Lake Michigan shoreline, highs will be in the upper 80s to low 90s and afternoon heat index values between 90 and 95 degrees into the middle of next week, according to forecasters.

Two-thirds of the grant, $100,000, would be used for a new statue of former Secretary of State Vel Phillips.

A bare pedestal is all that remains of Wisconsin's "Forward" statue after protesters tore it down June 23 along with a statue of Union Civil War Colonel Hans Christian Heg after the arrest of a local black activist for causing a disturbance in a nearby restaurant.

Wisconsin's "Forward" statue lies in the street on Capitol Square after it was pulled down by protesters on June 23. 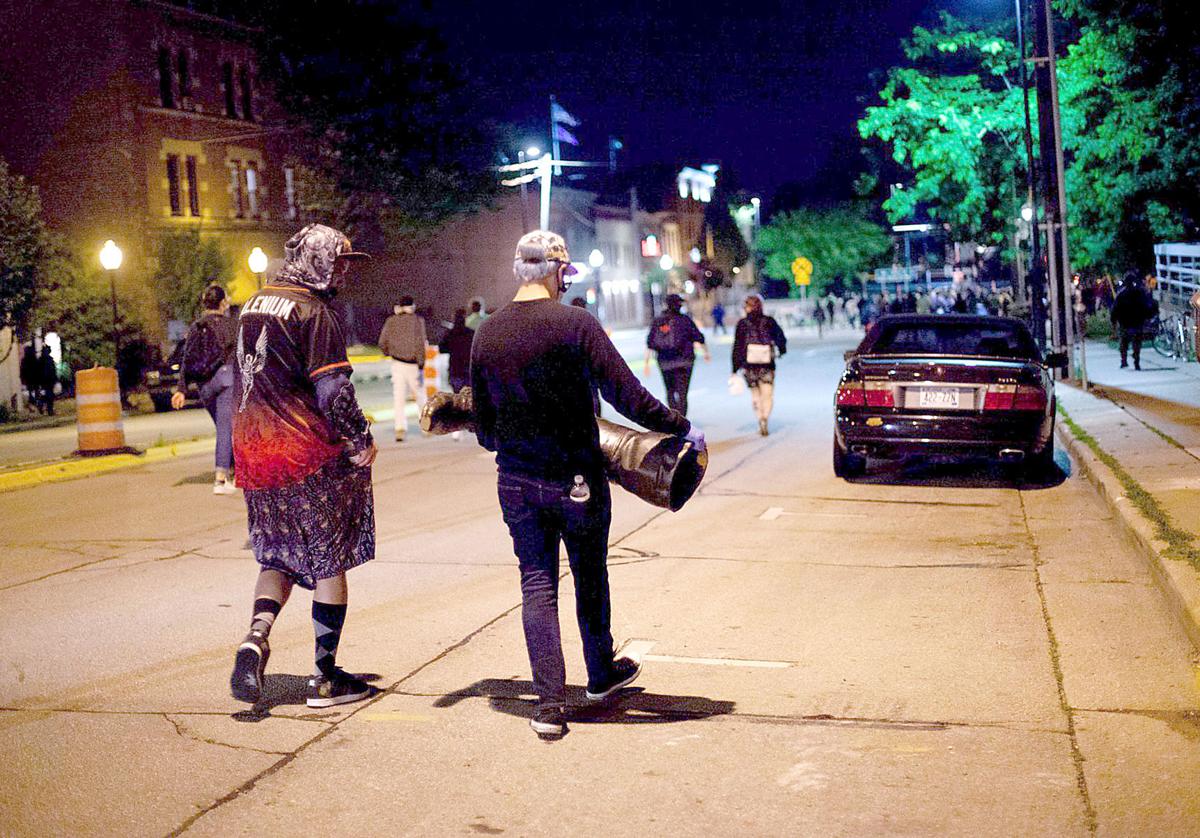 A man carries a leg from the statue of Hans Christian Heg after it was torn down by protesters June 23. The statue was later dumped in Lake Monona. 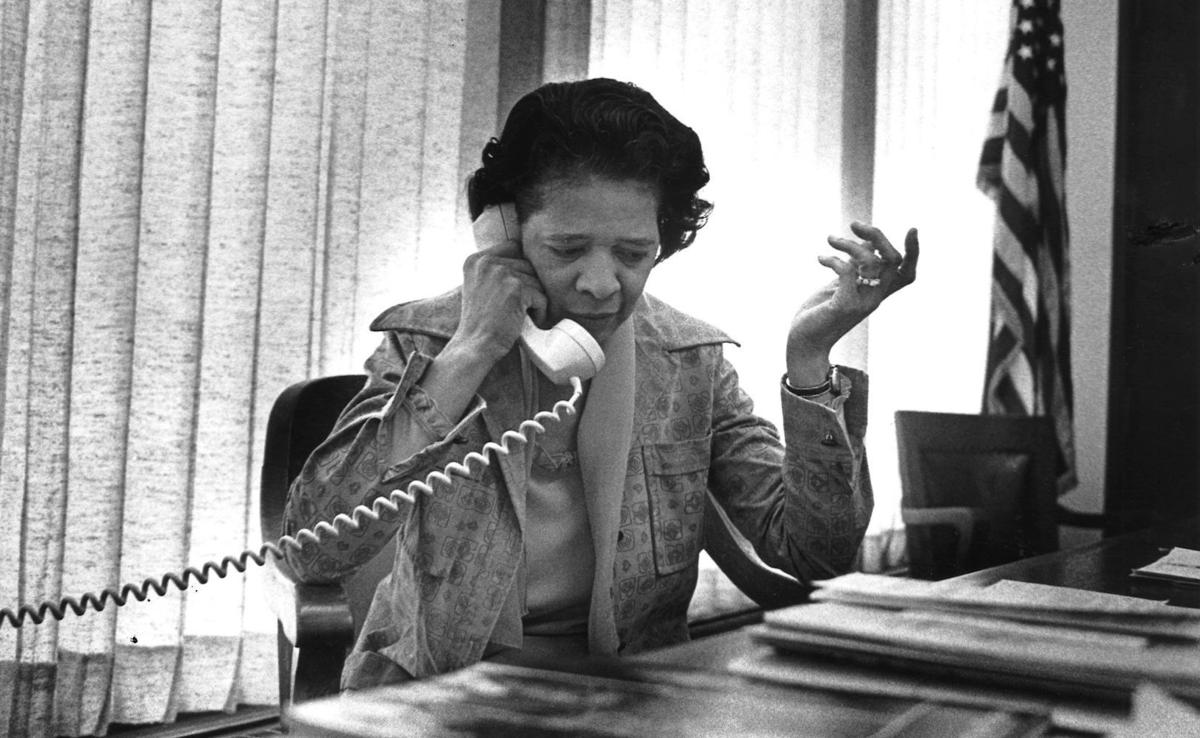