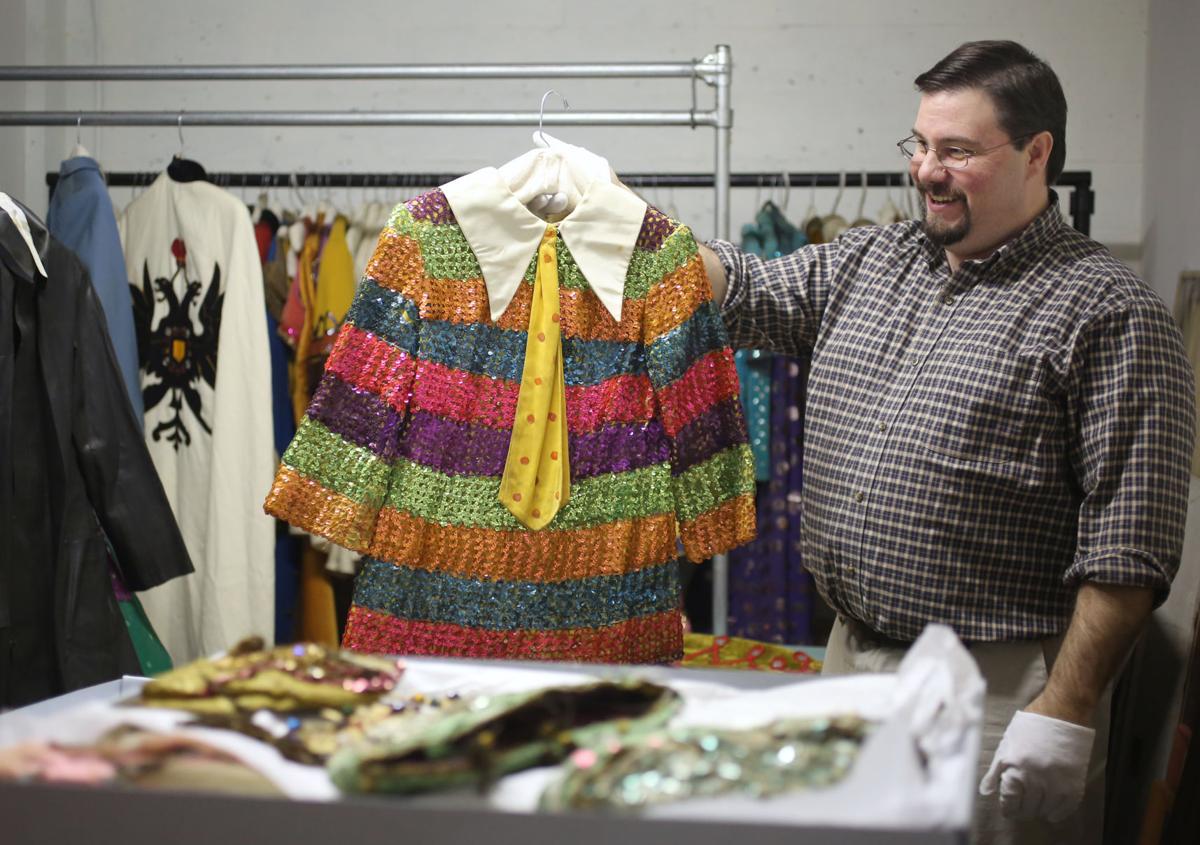 Peter Shrake, archivist at the Robert L. Parkinson Library and Research Center at Circus World Museum in Baraboo, shows off a sequin costume from 1969 that was worn during a dog and pony act. The 6,000-square-foot archive holds thousands of circus items dating back to the late 1700s. 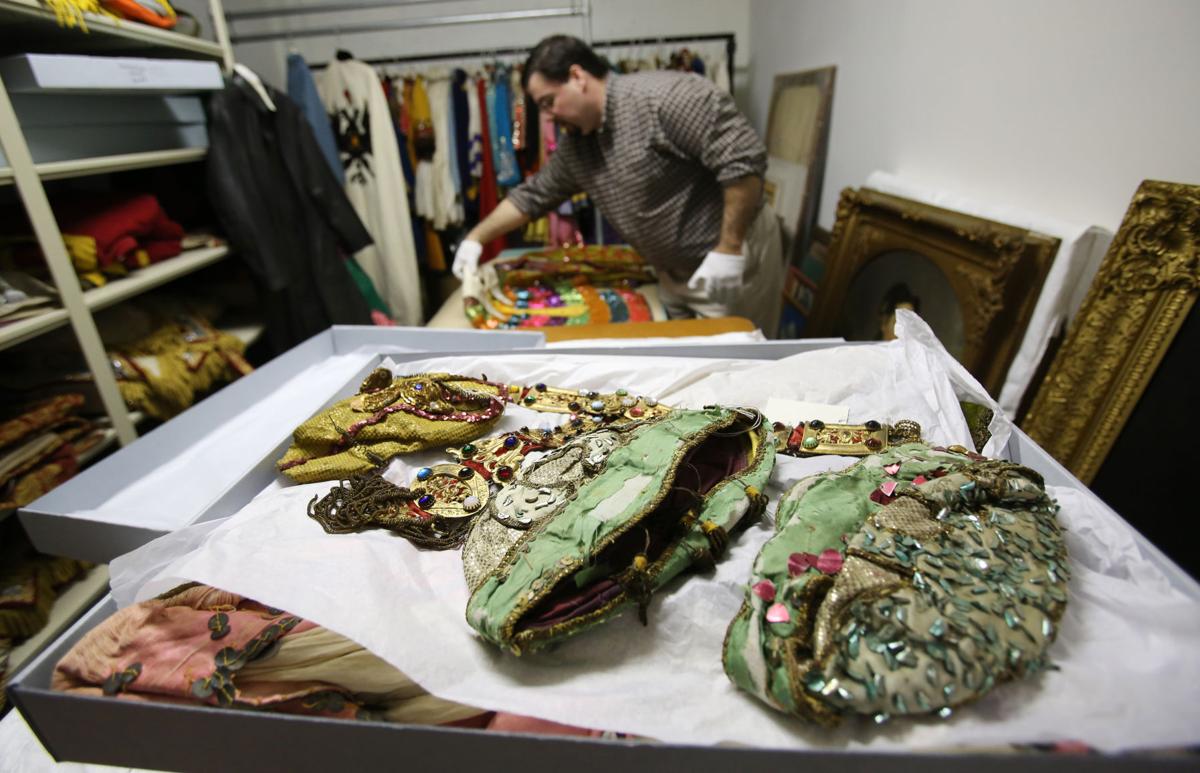 Hats pre-1918 from the collection of Carol Hulterstrum, a lifelong resident of Baraboo, are part of the artifacts in the Robert L. Parkinson Library and Research Center in Baraboo. 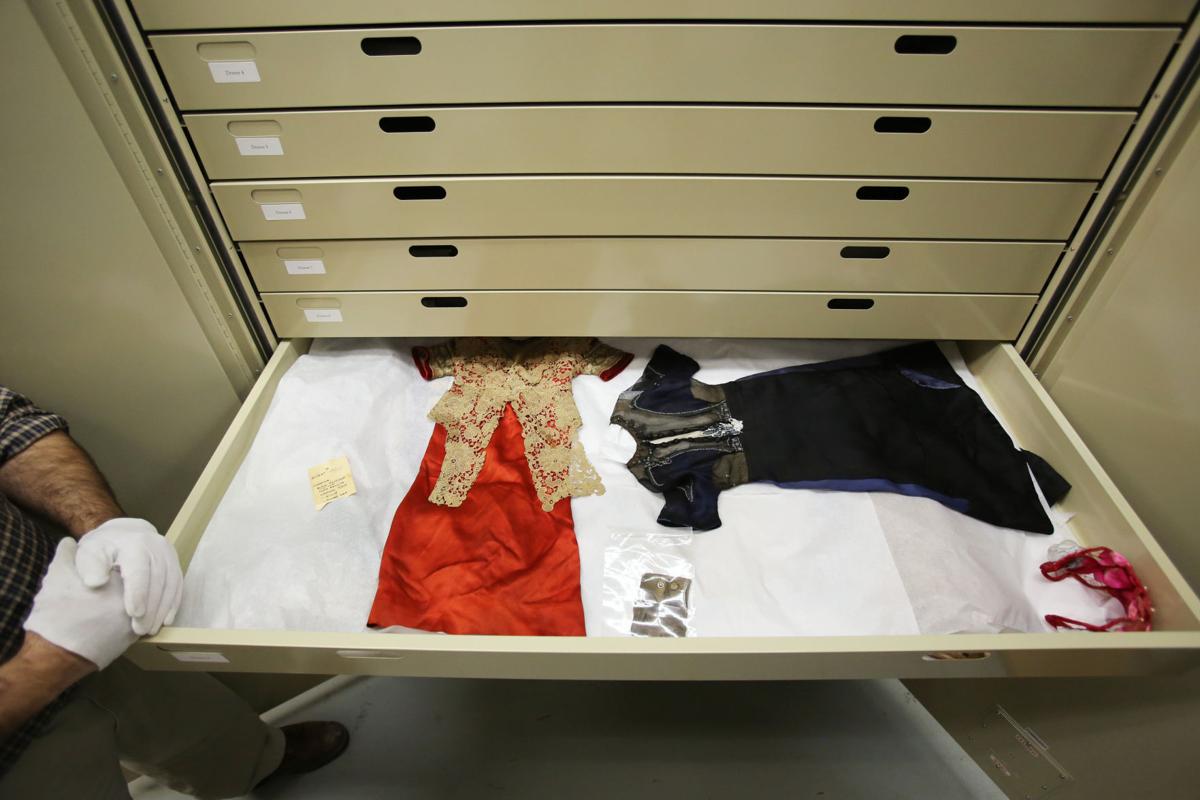 Costumes that were worn by a little person circus performer in 1912 are stored in the basement at Circus World's Robert L. Parkinson Library and Research Center in Baraboo.

BARABOO — The weather was fair with light rain, the country was in the depths of the Great Depression, it was still illegal to buy alcohol and Herbert Hoover occupied the White House.

It’s unclear if the numbers represented a good or bad day, but the figures from a few hours of circus business written in pencil, possibly at an ornate, wooden traveling desk, are preserved on a single page of a 2-inch-thick book stacked among dozens of other ledgers.

The books — their pages faded, bindings cracked and covers worn — are slivers, but important pieces, of a remarkable collection of history that fills a former brewery building a few hundred feet from the Baraboo River on the southwest side of the Circus World Museum grounds.

The announcement last weekend that the Ringling Bros. & Barnum Bailey Circus, part of it founded in this Sauk County city in the 1880s, will close means the relevance of the Robert L. Parkinson Library and Research Center may have been further elevated.

“It’s really a cultural form that is fading, and so as a result our job here to preserve that, to make that known to researchers not just now but 50 years from now, is being stepped up,” said Peter Shrake, the archivist in charge of the 6,000-square-foot history-filled facility. “The tempo is increasing in terms of material we have been receiving and that we hope will come in.

The Ringling brothers — Alf, Al, Charles, John and Otto — performed their first vaudeville- style show in Mazomanie in 1882 and two years later had a traveling circus with a wagon and a rented horse.

By 1900, the brothers had one of the largest traveling shows in the country and began buying other circuses, including, in, 1907, the Barnum and Bailey Circus. The Ringlings moved the winter quarters from Baraboo to Bridgeport, Connecticut, in 1918 and then in 1924 to Sarasota, Florida. Irvin Feld, a music and entertainment promoter, purchased the circus in 1967.

Scott O’Donnell, executive director of Circus World, has been inundated with requests from national and international media following last weekend’s announcement by Feld. It may be a while, however, before there is talk about acquiring items from Feld.

“That conversation is still to take place,” O’Donnell said. “We’re being very respectful. It can’t be an easy decision for them. Three generations of their family is into this (Ringling) brand. We stand at the ready if they so choose to anoint us with some artifacts or elements of their chapter of the brand.”

The Circus World Museum was incorporated in 1954 and opened in 1959 with less than an acre of land and six circus wagons. It has grown to a 64-acre complex with 30 permanent structures, seven winter quarters buildings along Water Street, a train shed and over 200 historic circus wagons.

The library and archive, housed in the former Effinger Brewery building and named after its longtime director, was established in 1965 and is a treasure trove that chronicles 2,800 circuses going back to 1793. The collection includes newspaper clippings, an estimated 400,000 photographs (including 2,000 glass plate negatives), nearly 10,000 lithographs, 1,900 recordings, up to 800 films, 3,500 books, 8,000 pieces of sheet music and 3,500 cubic feet of documents. It also houses the business records of the Ringlings from 1911 to 1967.

“It’s everything from daybooks, so the daily receipts, the daily expenses, to performer contracts, to business correspondence to purchase records to actually some union records relating to a strike in the 1930s,” Shrake said. “It’s a comprehensive inventory and collection of business records for the circus’ shows for the first half of the 20th century.”

Work is ongoing to put as much of the archives material as possible online, including an index guide identifying the subject matter of thousands of folders that will help researchers quickly narrow their searches. Audio is being uploaded to the internet, and 13 films up to 10 minutes each have also been uploaded, including one from a circus parade in 1904 in Waterloo, Iowa.

The films, which include professional and home movies taken by performers, are currently stored in a small room with a constant temperature and humidity level on the first floor of the library, but they will soon have a more suitable home.

They are to be relocated to a climate-controlled vault when the Wisconsin Historical Society later this year opens a $47 million, four-story, 188,733-square-foot archives building on Madison’s East Side.

“How else do you make a collection like this, which is fragile and ages and, as extensive as it is, available to the public,” Shrake said. “That is the core of our challenge here.”

The library and archives are open to the public. But because Shrake is the lone employee, appointments must be made ahead of time, or research requests can be made via email.

The main floor includes books, documents, audio and visual equipment, drawers filled with lithographs and advertising memorabilia and a restored oil painting of P.T. Barnum. One section holds shelves of shallow, 18-inch-long cardboard boxes filled with small yellow slips of paper and is referred to as the Yellow Ticket Index. The slips hold the names of over 350,000 people who worked in circus jobs around the country between 1870 and 1965.

The basement, where artifacts are stored, looks more like a well-organized circus garage sale but without the price tags.

There are racks and drawers of costumes, including a one-piece jumper from 1918 for an acrobat from the Skerbeck Circus in Escanaba, Michigan, and tiny dresses and shoes that appear to be for a toddler but are actually part of the wardrobe for a little person who worked for the Ringlings in 1912.

A few feet away, tucked in a drawer, is the watch Karl Wallenda was wearing when he died in 1978 during a tightrope-walking performance in Puerto Rico.

There are musical instruments, harnesses, tent stakes, side show banners, elephant stands, tools to repair circus wagons and even a stuffed six-legged sheep.

The artifacts also include the charred wooden seats from a 1944 Ringling show in Hartford, Connecticut. A fire during a performance attended by more than 6,000 people killed 167 and injured more than 700 and almost wiped out the business.

Shrake, 46, grew up in the Milwaukee suburb of Franklin, earned a bachelor’s degree in history at UW-Stevens Point and a master’s degree history at UW-Eau Claire, focusing on 1830s Jacksonian studies.

He spent eight years as the director of the Sauk County Historical Society and then another three at the Wisconsin Historical Society while he pursued a master’s degree in library and information studies at UW-Madison. He was hired at Circus World in 2011.

“I knew some (about circuses) but I didn’t know a lot,” Shrake said. “The biggest challenge was not only was I learning the scope of the collections but I was immersed in this subject matter. It’s the performers, it’s the showiness, yes, but it’s also the logistics, the nuts and bolts. How did they make these shows run.”

Barry Adams covers regional news for the Wisconsin State Journal. Send him ideas for On Wisconsin at

or by email at

Orange Shoe Personal Fitness on a path for growth

The Dane County-based gym wants to expand to more than 100 locations over the next five years.

The Madison Circus Space is trying to raise $1 million to expand services and move into a new building as demand for circus arts space jumps.

Peter Shrake, archivist at the Robert L. Parkinson Library and Research Center at Circus World Museum in Baraboo, shows off a sequin costume from 1969 that was worn during a dog and pony act. The 6,000-square-foot archive holds thousands of circus items dating back to the late 1700s. 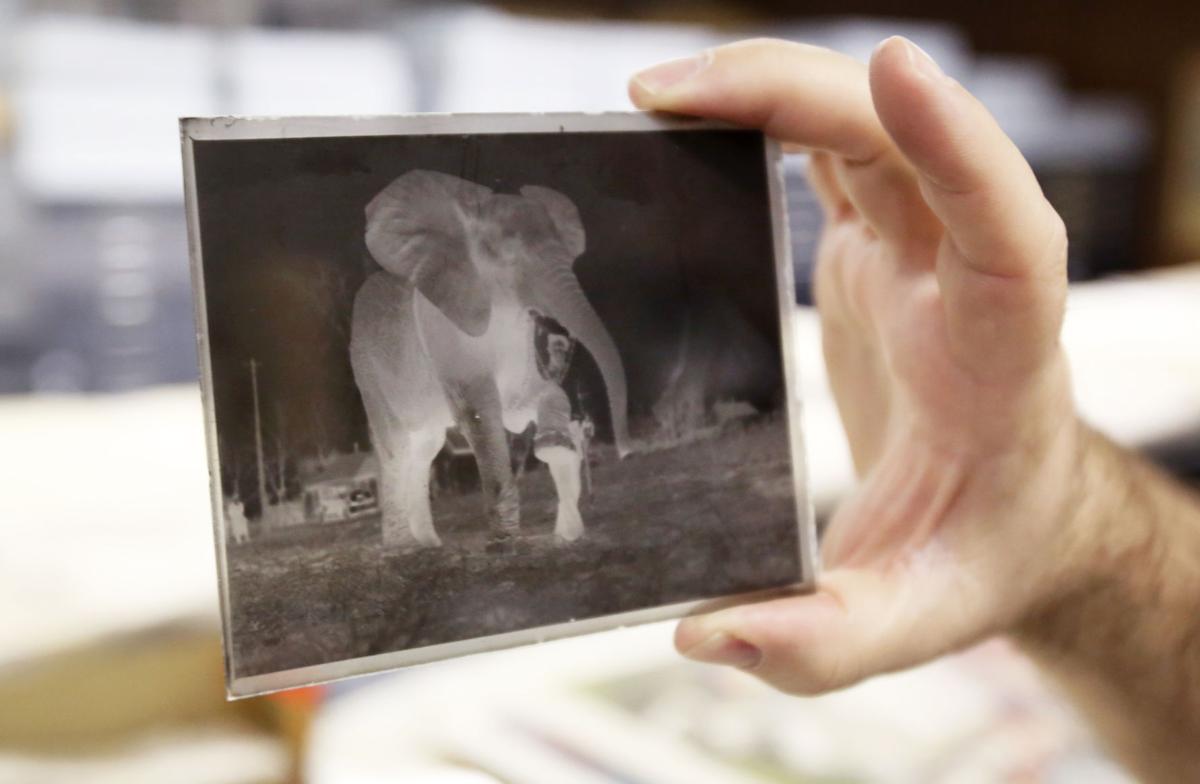 The Robert L. Parkinson Library and Research Center at Circus World Museum in Baraboo is home to nearly 400,000 photographs, including 2,000 glass plate negatives. This negative, held by archivist Peter Shrake, is from 1935. 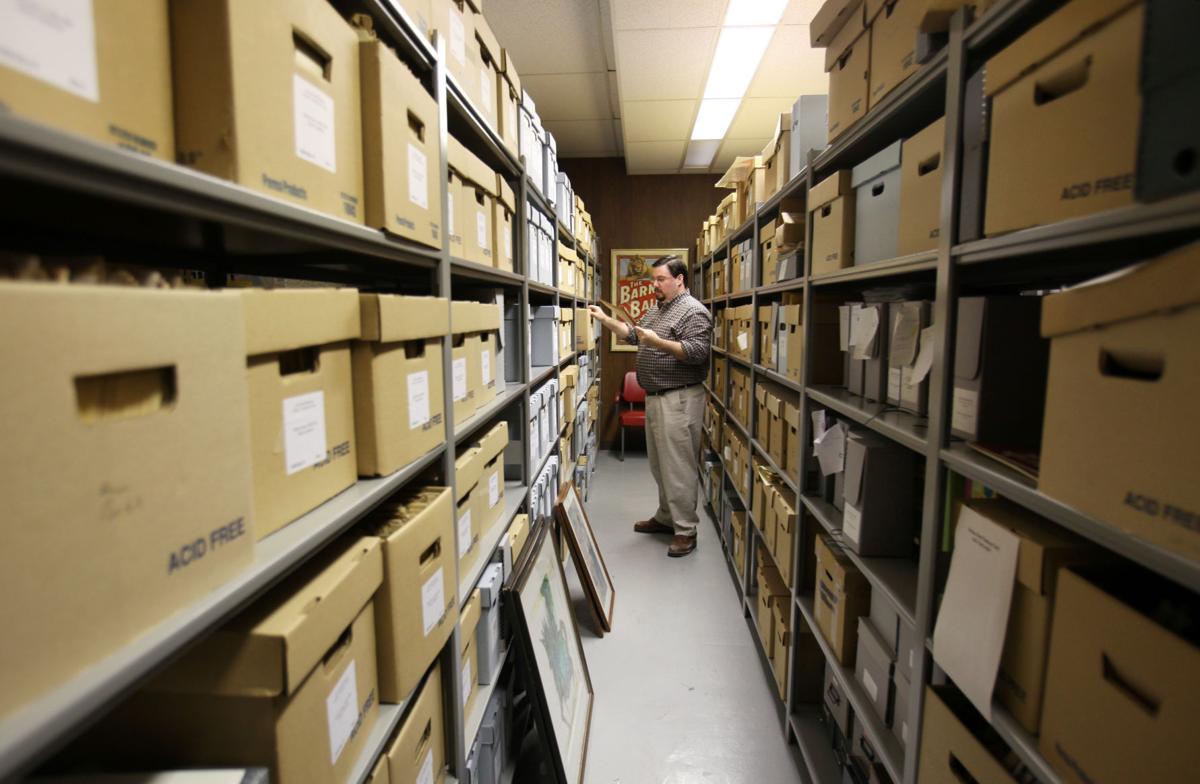 Archivist Peter Shrake looks through a box of hand written music in the archives at the Robert L. Parkinson Library and Research Center at Circus World Museum in Baraboo. The facility is a repository that chronicles the history of more than 2,800 circuses. 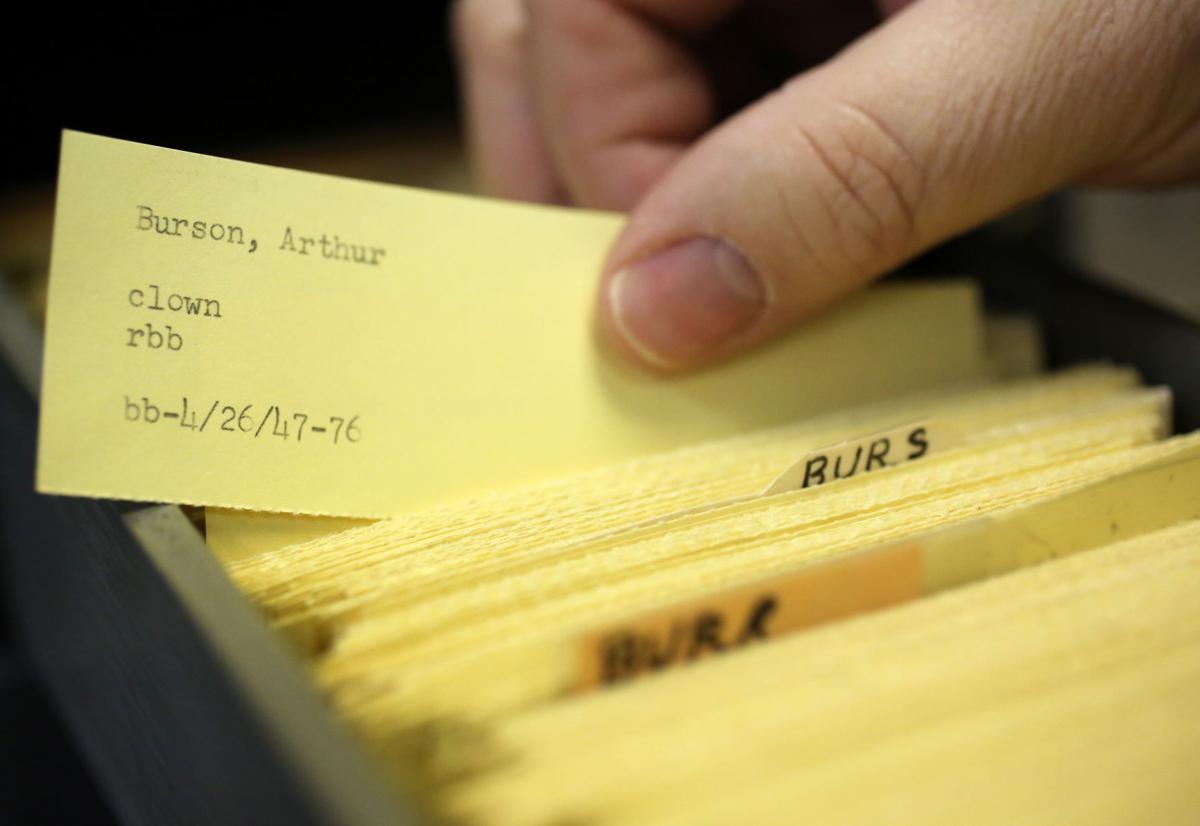 The Yellow Ticket Index has 350,000 names of circus workers and includes their jobs and the circus at which they worked. The index ranges from 1870 to 1965. 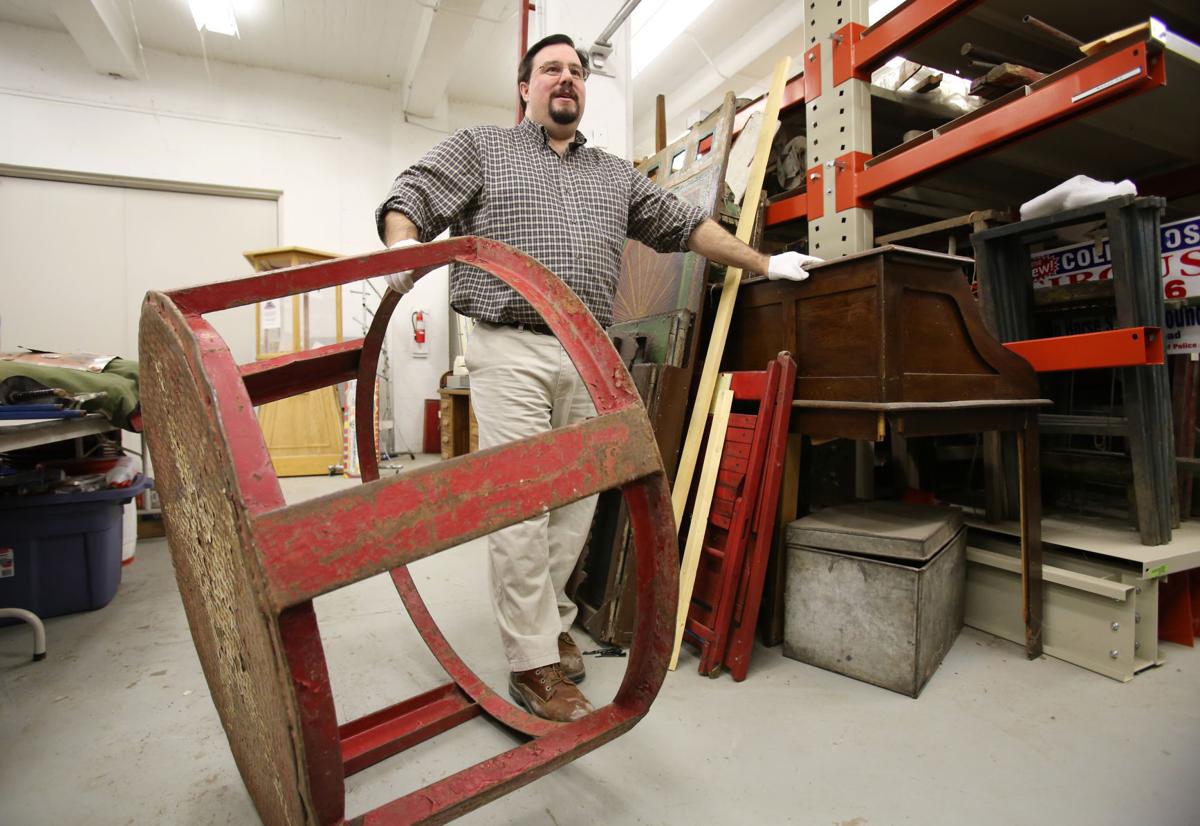 Archivist Peter Shrake holds up an elephant stand used in the circus. The basement storage area at Circus World's Robert L. Parkinson Library and Research Center in Baraboo is filled with circus items both big and small. 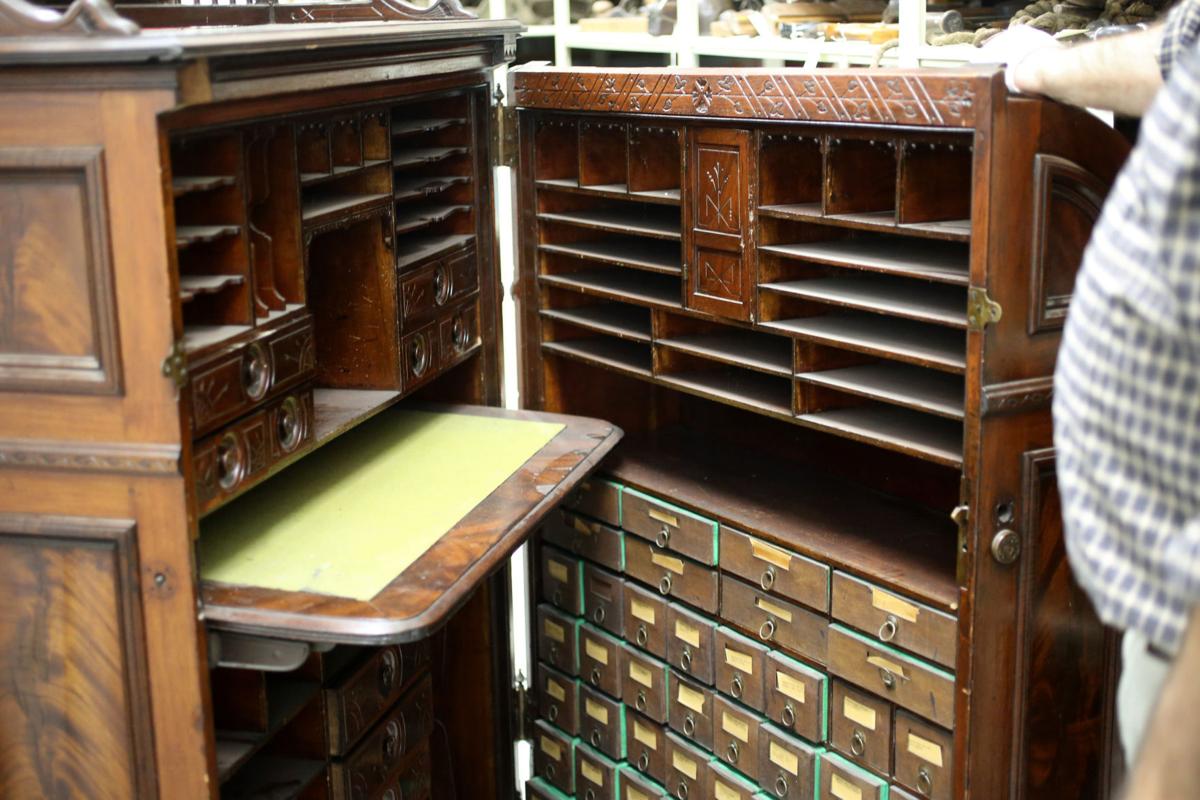 A desk that traveled with the Ringling Bros. and Barnum & Bailey Circus is among the items at the Robert L. Parkinson Library and Research Center in Baraboo.

Hats pre-1918 from the collection of Carol Hulterstrum, a lifelong resident of Baraboo, are part of the artifacts in the Robert L. Parkinson Library and Research Center in Baraboo. 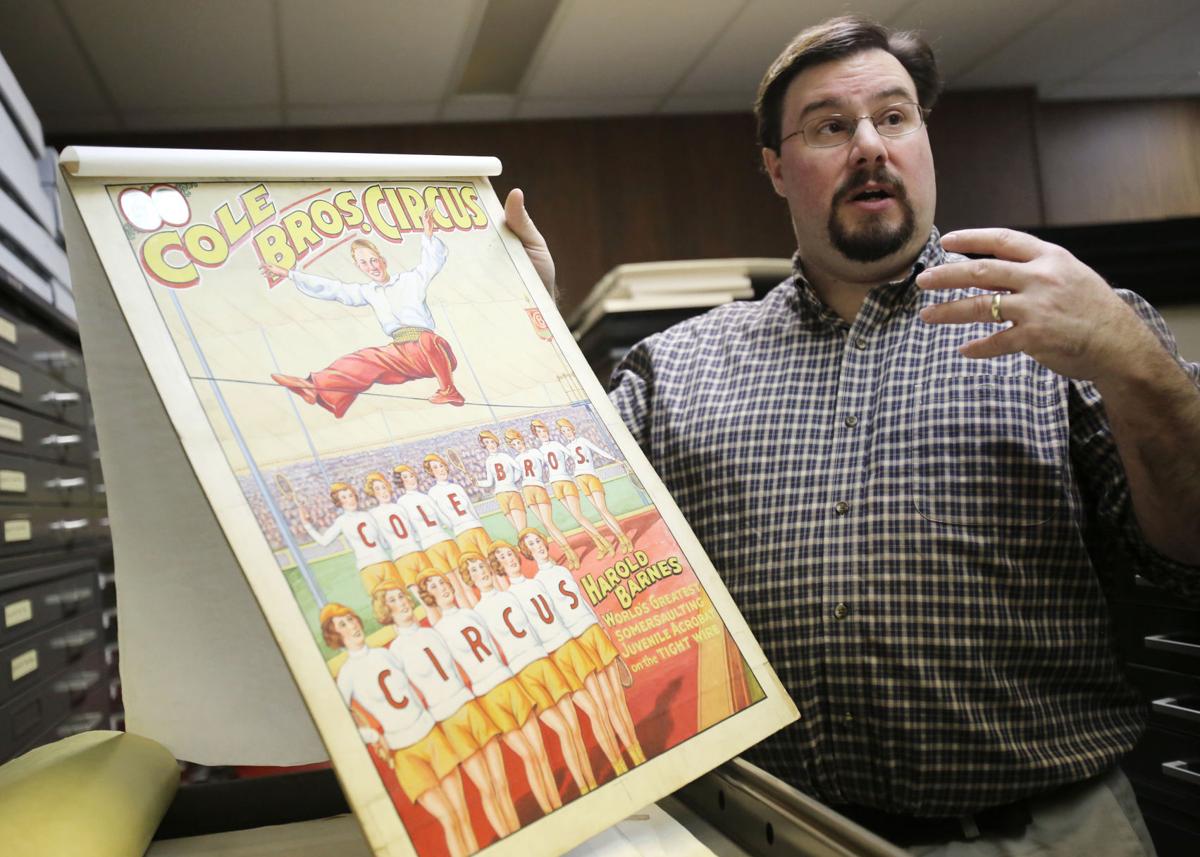 Archivist Peter Shrake holds a lithograph from the Cole Bros. Circus founded in 1884.  Robert L. Parkinson Library and Research Center in Baraboo is home to nearly 10,000 lithographs that were used to promote circuses. 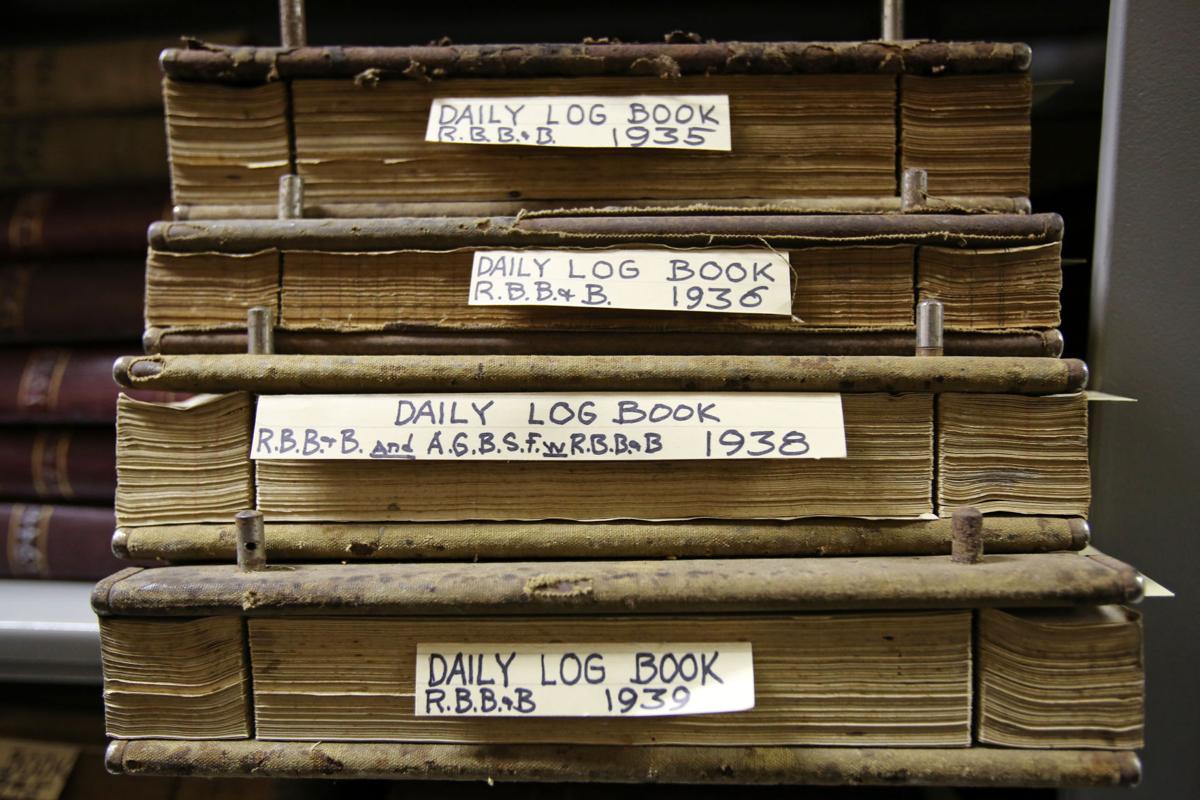 The business records from 1911 to 1967 of the Ringling Bros. and Barnum & Bailey Circus are housed at the Robert L. Parkinson Library and Research Center in Baraboo. The circus was purchased by Irvin Feld in 1967.

Costumes that were worn by a little person circus performer in 1912 are stored in the basement at Circus World's Robert L. Parkinson Library and Research Center in Baraboo. 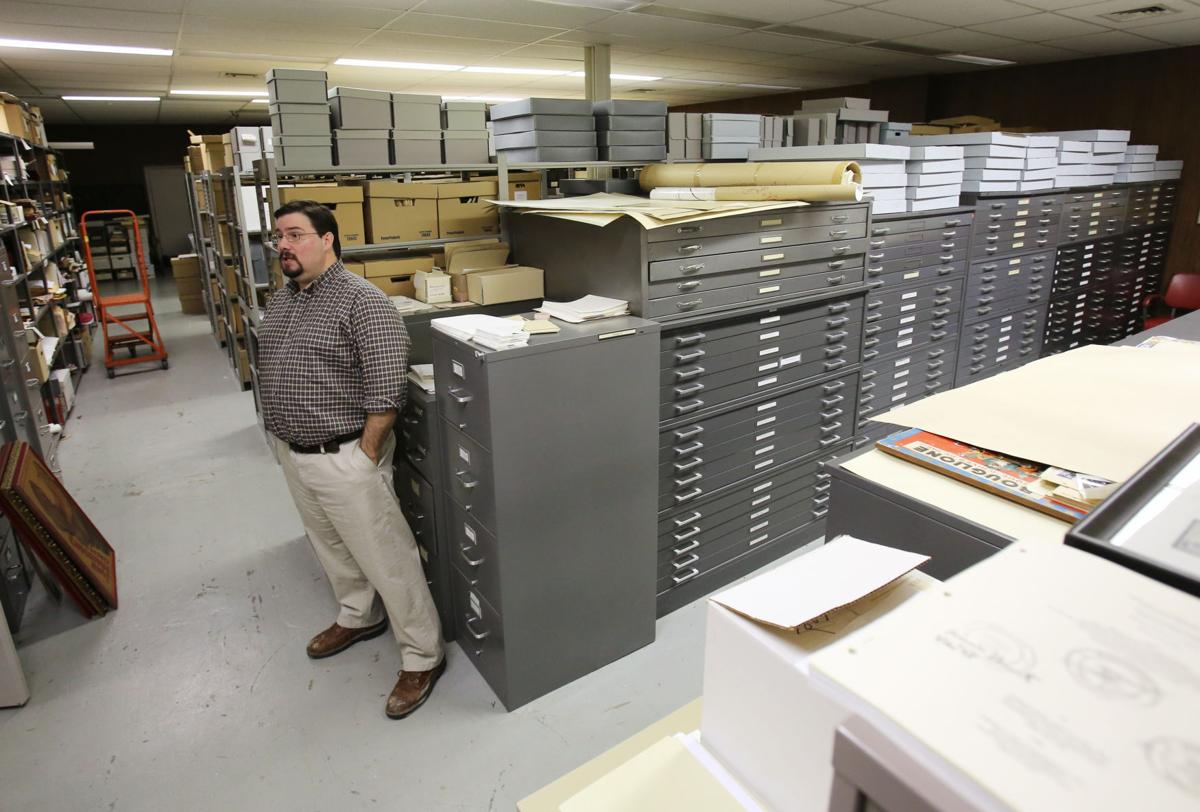 Archivist Peter Shrake gives a tour of a room where circus archives are stored at Circus World's Robert L. Parkinson Library and Research Center in Baraboo. 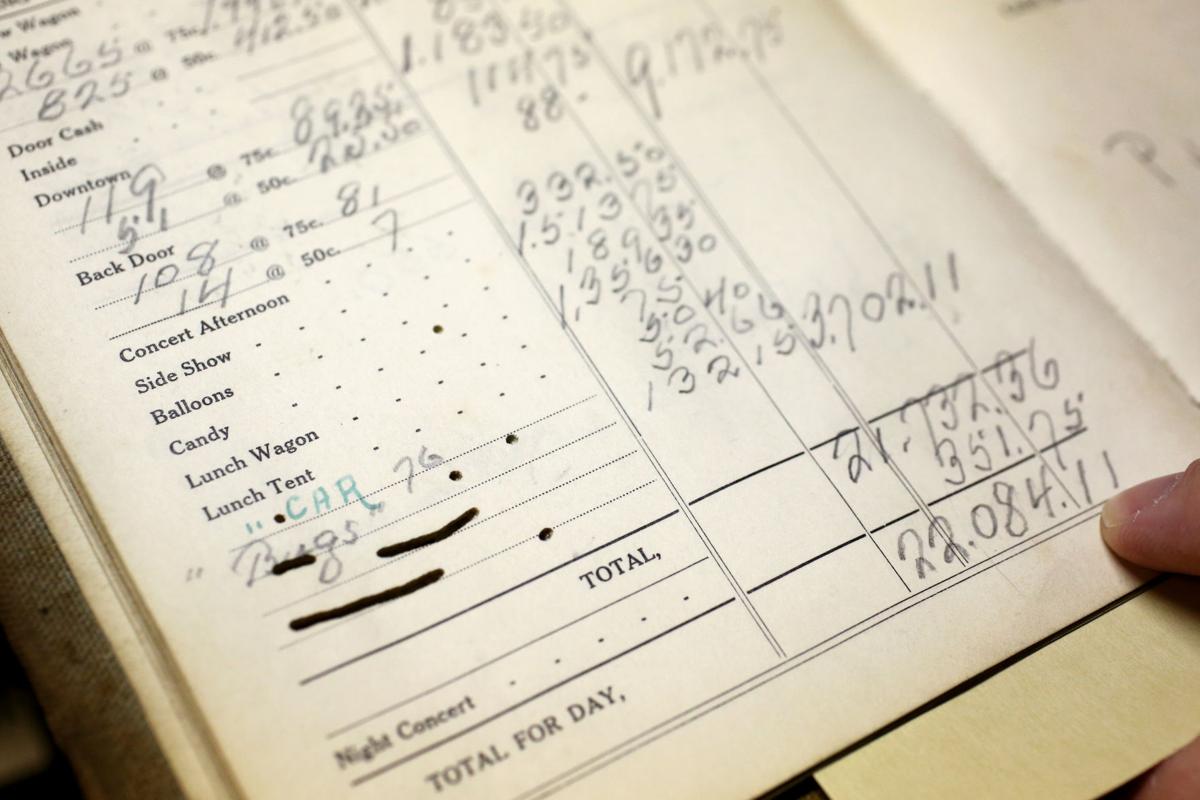