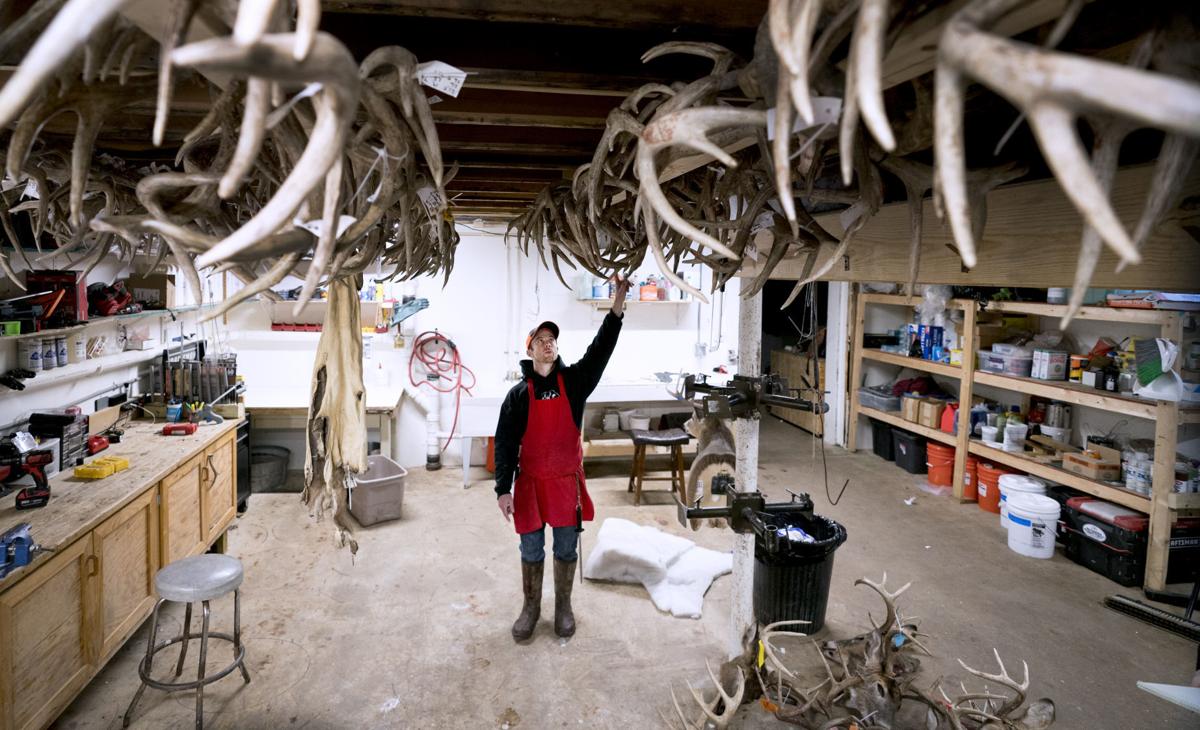 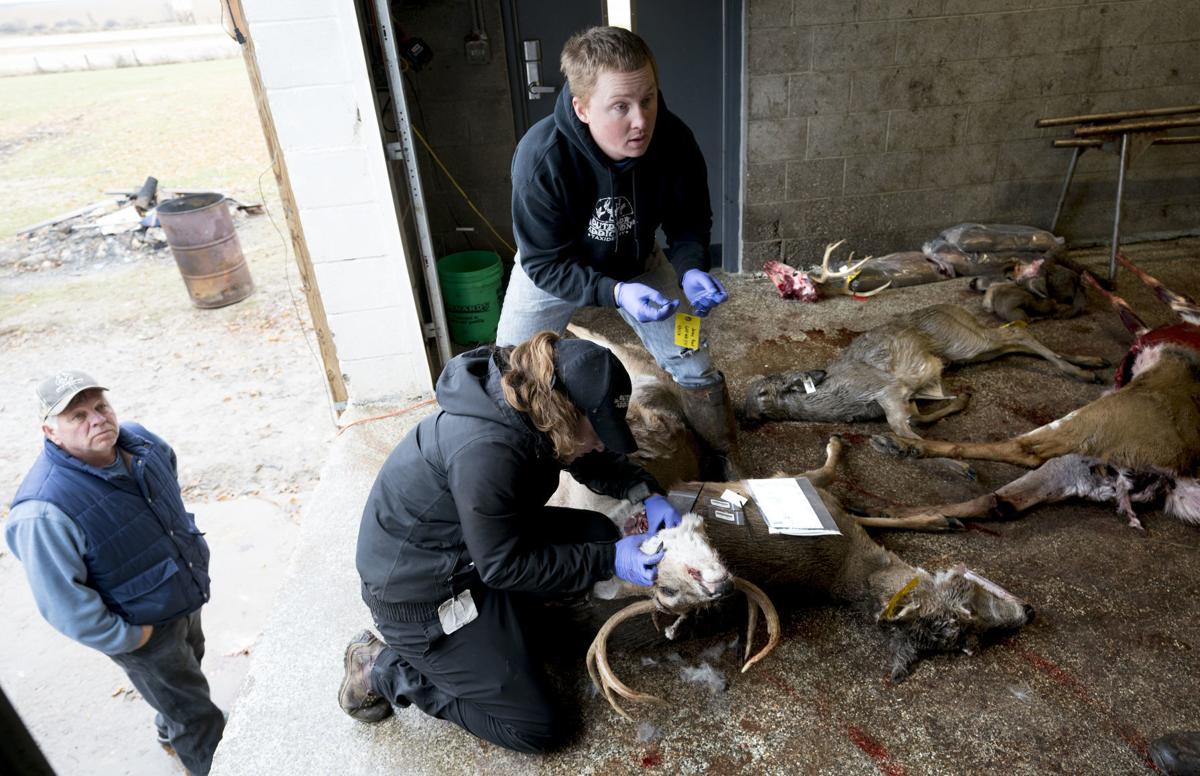 BLUE MOUNDS — The number of people hunting deer is on a decades-long slide, this year’s harvest is off from last season, and chronic wasting disease is still a major concern.

Alex Lease, however, had no qualms about buying a deer-processing business this summer along Highway ID in the heart of the CWD zone.

And his decision appears to be sound.

Lease’s Outdoor Addiction — a one-stop shop that offers up free CWD testing, butchering, sausage-making and taxidermy — was abuzz last week in the midst of the nine-day gun deer season, a Wisconsin tradition older than the Green Bay Packers, Johnsonville Sausage and Colby cheese.

Lease expects to process between 600 and 700 deer and remove the lymph nodes from up to 1,000 deer so they can be tested for CWD. He’ll be busy making venison snack sticks, summer sausage and landjaegers, likely through February. He also has a basement full of antlers, and more coming in, that will be formed into mounts for man caves, family rooms and basement hideaways.

But he’s also trying to create a sense of place where hunters can gather, share their stories and commune after Gov. Scott Walker’s administration did away with deer registration stations in favor of electronic registration in 2015.

“We’re trying to bring that camaraderie back,” Lease said. “Opening weekend we were cooking out, and we had 20 to 30 people here at a time. We’re trying to make our own scene.”

Wisconsin is home to some remarkable butcher shops that have long been destinations for successful deer hunters. They include Bavaria Sausage Kitchen in Fitchburg, Lodi Sausage Co., Miesfeld’s in Sheboygan, Straka Meats in Plain, LeRoy’s Meats in Horicon and Pernat’s Meats with locations in Johnson Creek, Juneau and Ixonia.

He spent his early childhood in Barneveld before moving to Cottage Grove, where he graduated from Monona Grove High School and began doing taxidermy out of his mother’s garage. In 2016, he began renting space in the bottom of his uncle’s deer-processing facility just outside Blue Mounds. Lease, who drives a sporty Toyota Camry that is covered with decals advertising his business, not only brings youthful energy and optimism but also social media skills.

Over the summer, he posted a video on Facebook announcing he had purchased his uncle’s deer-processing business and the building. Lease’s Instagram account has more than 1,000 followers and is filled with images of his work, which includes not only deer but fish, waterfowl, turkey and bear.

“The rut is on,” Lease announced in an Instagram post Oct. 31 during the bow season for deer. “We’ve got a little snow on the ground, it’s nice and cold out ... there’s going to be a lot of deer going down.”

He also has started a podcast featuring hunting and taxidermy. Lease has three episodes in the books and records the shows at a table filled with microphones, cords and a mixer in front of a wall filled with wildlife mounts in the retail area of his business. A recently completed mountain lion mount stands nearby.

On Wednesday, the business was in full gear. Pickup trucks with freshly killed deer waited to back into the loading dock, where workers also used power saws and scalpels to remove lymphoids, which were placed in plastic baggies to be shipped off to a state Department of Natural Resources lab for testing.

Jason Reed, of Dodgeville, brought in an 8-point buck he shot in rural Iowa County, where 26 percent of the deer last season tested positive for CWD.

“I missed it the first time,” Reed, 36, chuckled. “It was chasing some does and came around 15 minutes later and I got a second shot at it and I dropped it.”

Near the large walk-in cooler just beyond the loading dock, Brad Lease, Alex’s cousin, worked on butchering a deer that had already been skinned and was going to be donated to Second Harvest Food Bank. Brad said he can break a deer down into pieces that are further processed at a different station in about 10 minutes. He wore a blaze orange stocking cap and insulated winter boots, and wielded a razor-sharp boning knife. Part of the job for Brad, who works full-time as a UPS driver, involves not only cutting out entry and exit holes from the fatal shot but also realizing that wild venison is the ultimate in the local food movement.

“This is organic food. It’s not raised on a farm,” he said. “It’s free-range, good, healthy venison.”

The statewide harvest for the opening weekend was 90,286 deer, down 26.7% from the previous year, according to the DNR. The number of licenses sold was up slightly over 2018 to 564,052 but has been on a downward trend since 1990 when 699,275 licenses were sold. This year’s season, which straddles Thanksgiving, falls later in the rut, while the 2018 season started earlier in the rut when deer are more active. This year’s season has also been hampered by a lack of snow cover in the southern part of the state, wet soils that kept hunters out of marshes and river bottoms, and an unusually late harvest that left about 2 million acres of corn remaining in fields, providing ample cover for deer.

Deer harvests were down in every county during the opening weekend except Walworth, where the 335 deer represented a 2.8% increase, according to the DNR.

But for A.J. and Casey Bennett, of Clyde Park, Montana, their first time hunting whitetail in Wisconsin was a phenomenal success. A.J., 33, normally uses his .300-caliber Winchester Magnum rifle with a Vortex Optics AMG scope made in nearby Barneveld to hunt elk in the Crazy Mountains near his home in southern Montana. But he took a 403-yard shot south of Blue Mounds on Tuesday afternoon to bag a 3½-year-old, 8-point buck. His wife, Casey, 32, filled her tag the following morning with a 75-yard shot that took down an 11-point buck.

The couple had brought the heads of their deer into Outdoor Addiction for CWD testing but had butchered the deer at the rural Blue Mounds home of Gary Karls, whom they met a few years ago when A.J. was doing excavation work at a Montana cabin owned by Karls. They have since hunted elk together in the Big Sky State but found whitetail success in the Badger State.

“We have whitetail, but they don’t ever get this big,” A.J. said. “We’re coming back next year.”

'I got a buck': 104-year-old woman becomes oldest state hunter to kill a deer

The Department of Natural Resources says Florence Teeters was inspired to purchase her first hunting license while sitting in a blind on her land in Price County with her son, Bill, during last year’s gun deer season.

'When things go bad, it’s usually the normal stuff such as lousy weather in some regions, including snow, rain, and then standing crops,' DNR big game ecologist Kevin Wallenfang said.

We are sharing Wisconsin State Journal staffers' favorite work from 2019.  From reporter Barry Adams: I had a hard time picking just five favo… 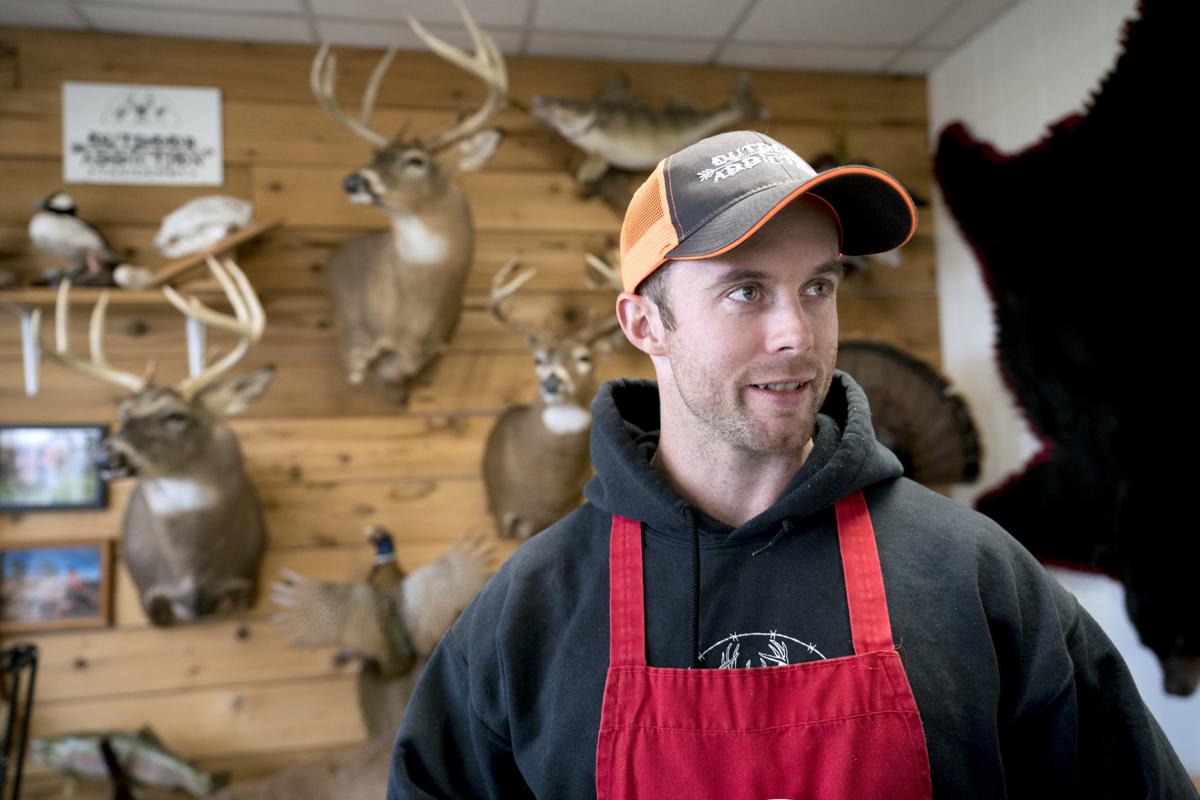 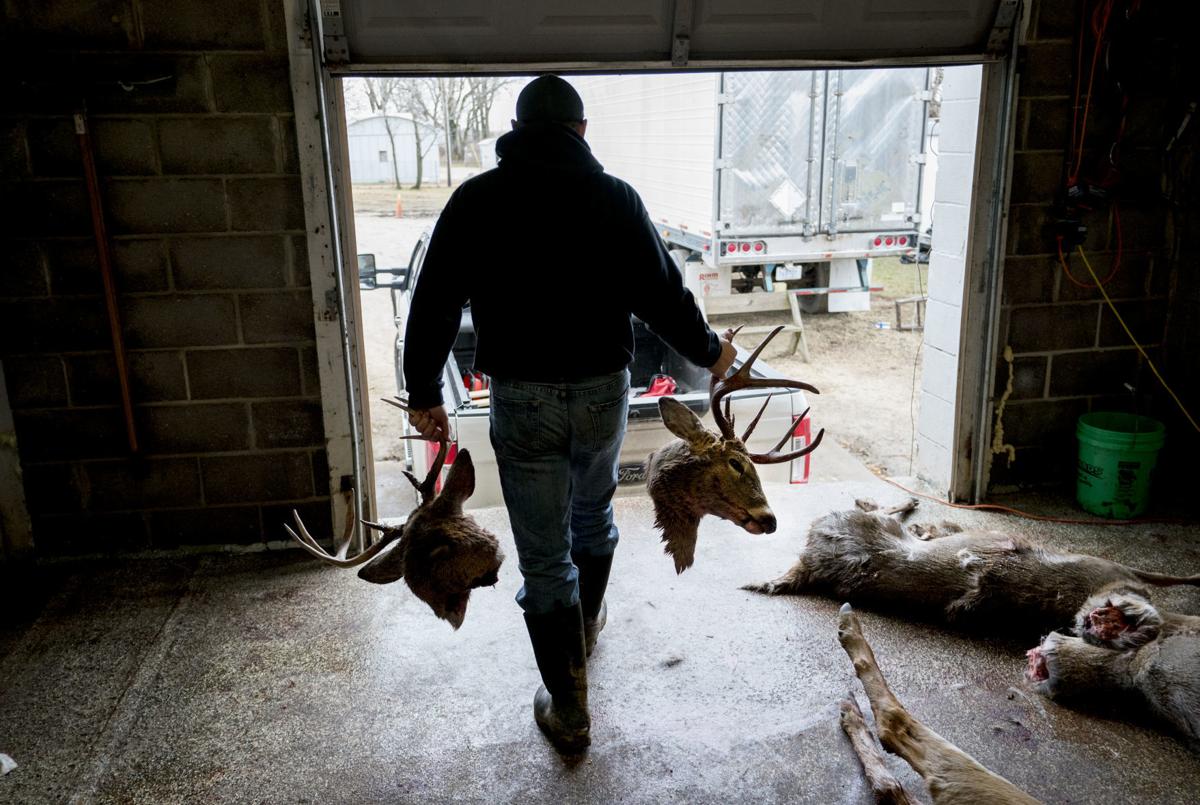 A.J. Bennett, of Clyde Park, Mont., brought the heads of two deer to Outdoor Addictions in Blue Mounds to be tested for chronic wasting disease. He and his wife bagged the deer last week south of Blue Mounds. 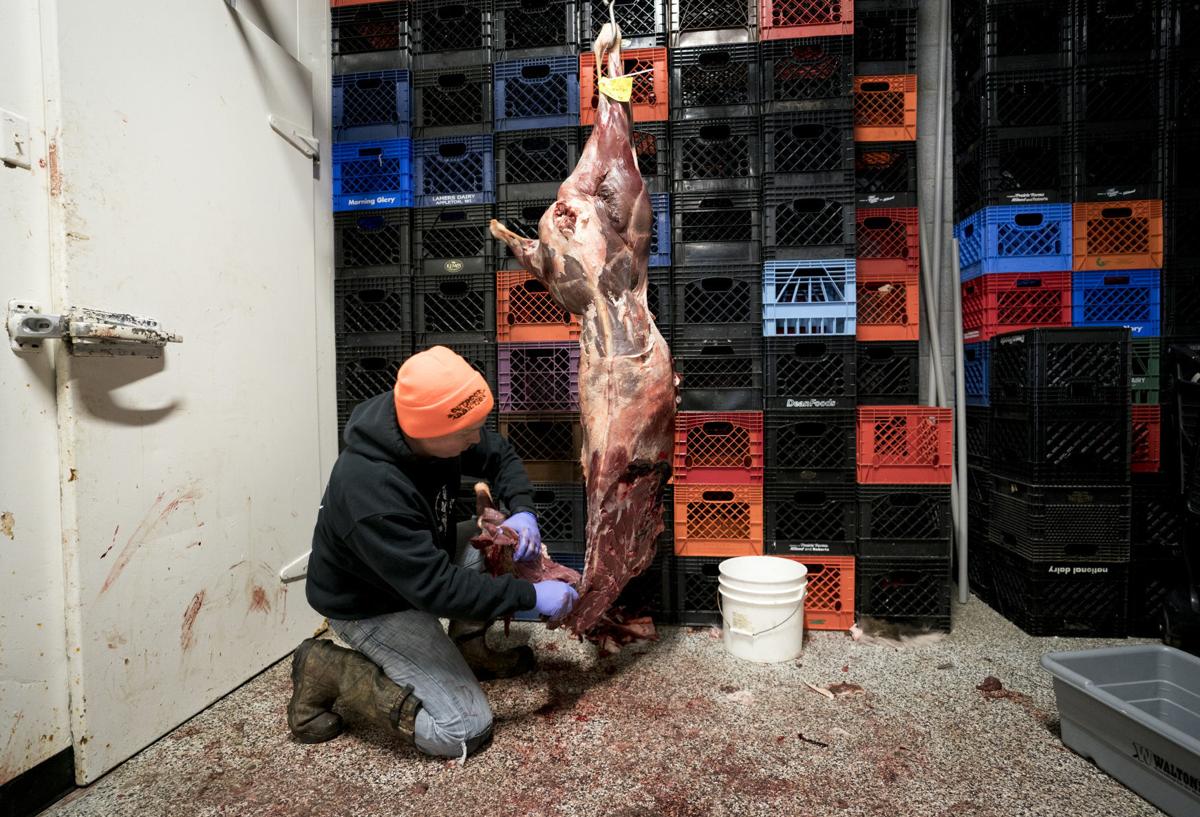 Brad Lease cuts a deer into sections before it is further processed at Outdoor Addiction in Blue Mounds. It takes Lease about 10 minutes to section up a deer. He works as a UPS driver when he's not butchering deer. 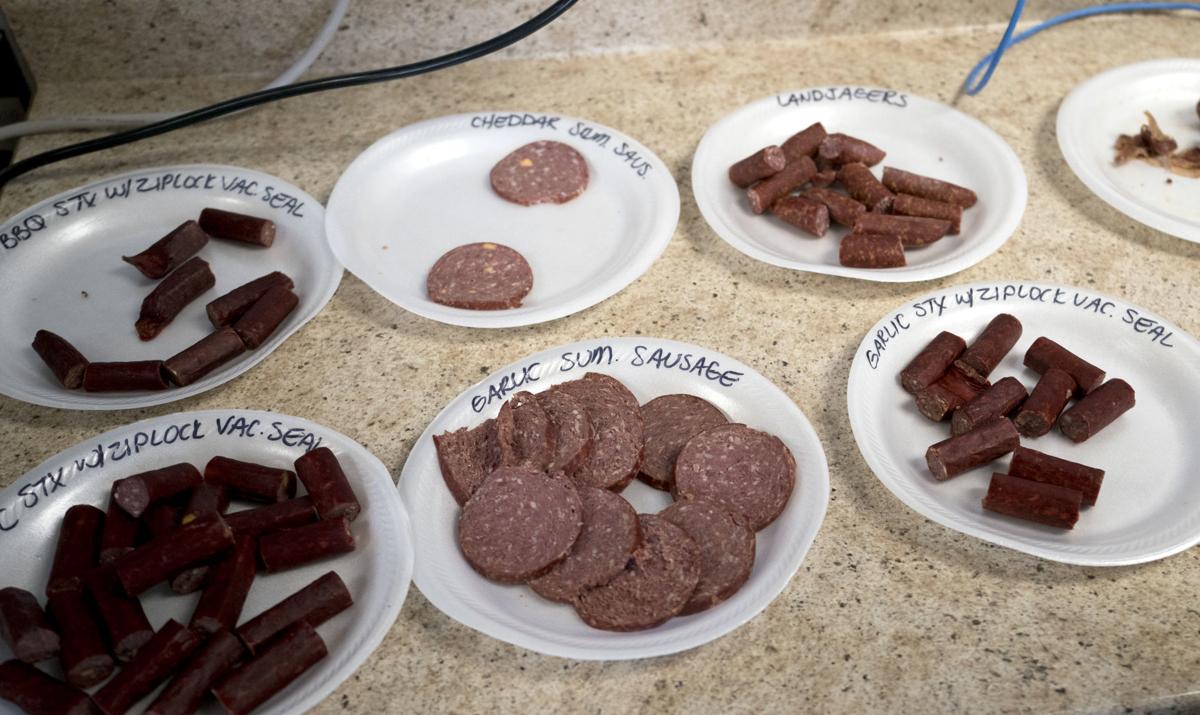 Samples of venison products produced at Outdoor Addiction in Blue Mounds are available to visitors. They include summer sausage, snack sticks and landjaegers. 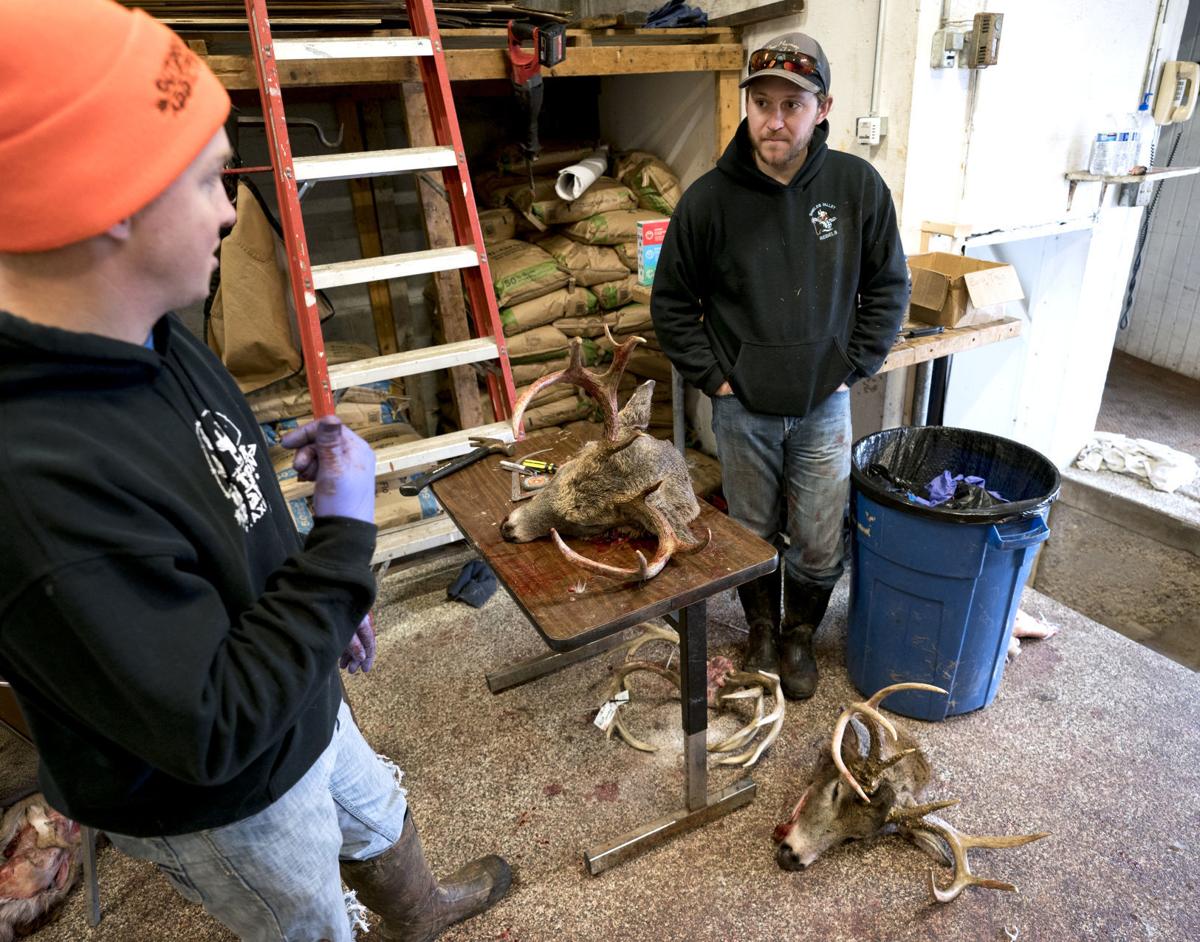 A.J. Bennett, right, of Clyde Park, Mont., brought the head of the 8-point buck he shot south of Blue Mounds last week to Outdoor Addiction to be sampled for CWD, which also includes aging the deer by examining wear on the teeth. 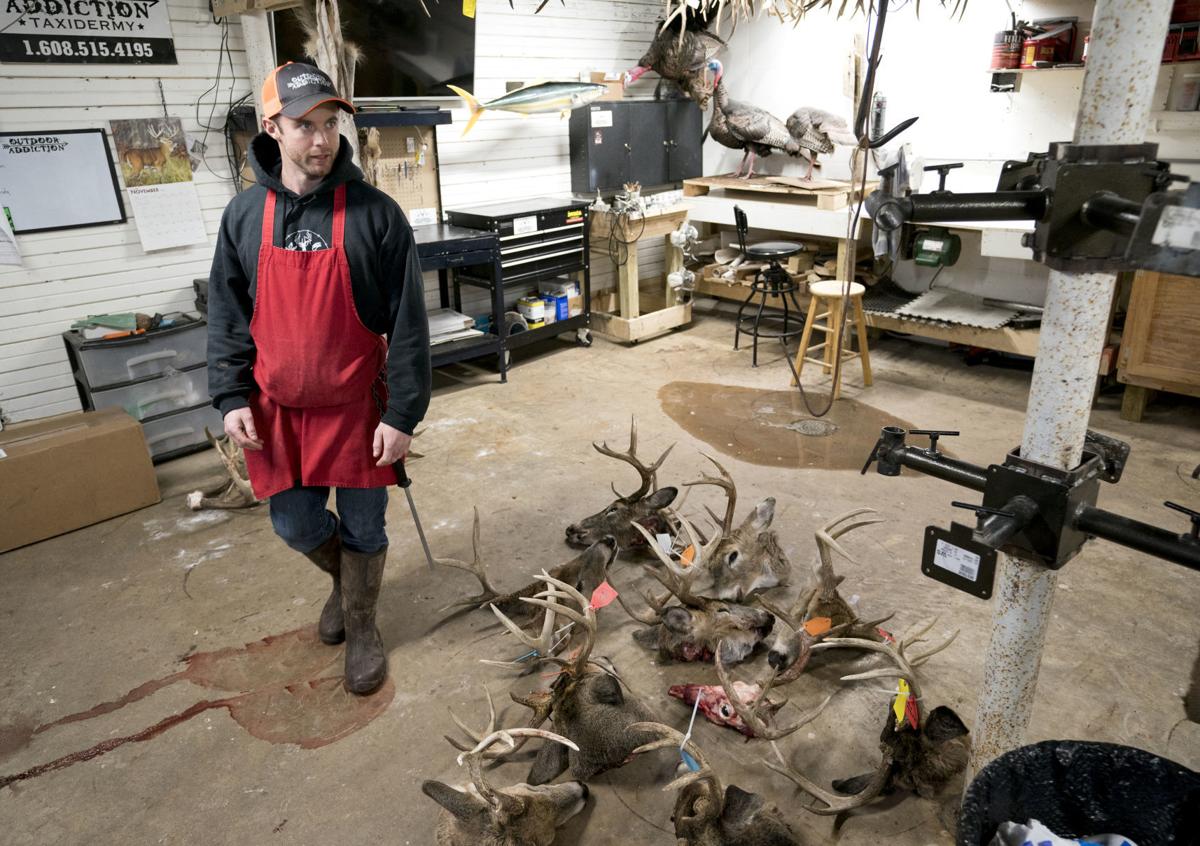 Alex Lease had been renting since 2016 the basement of his uncle's deer-processing business in Blue Mounds so he could run his Outdoor Addiction taxidermy business. Lease bought the processing business and the building this summer and now has a one-stop shop.