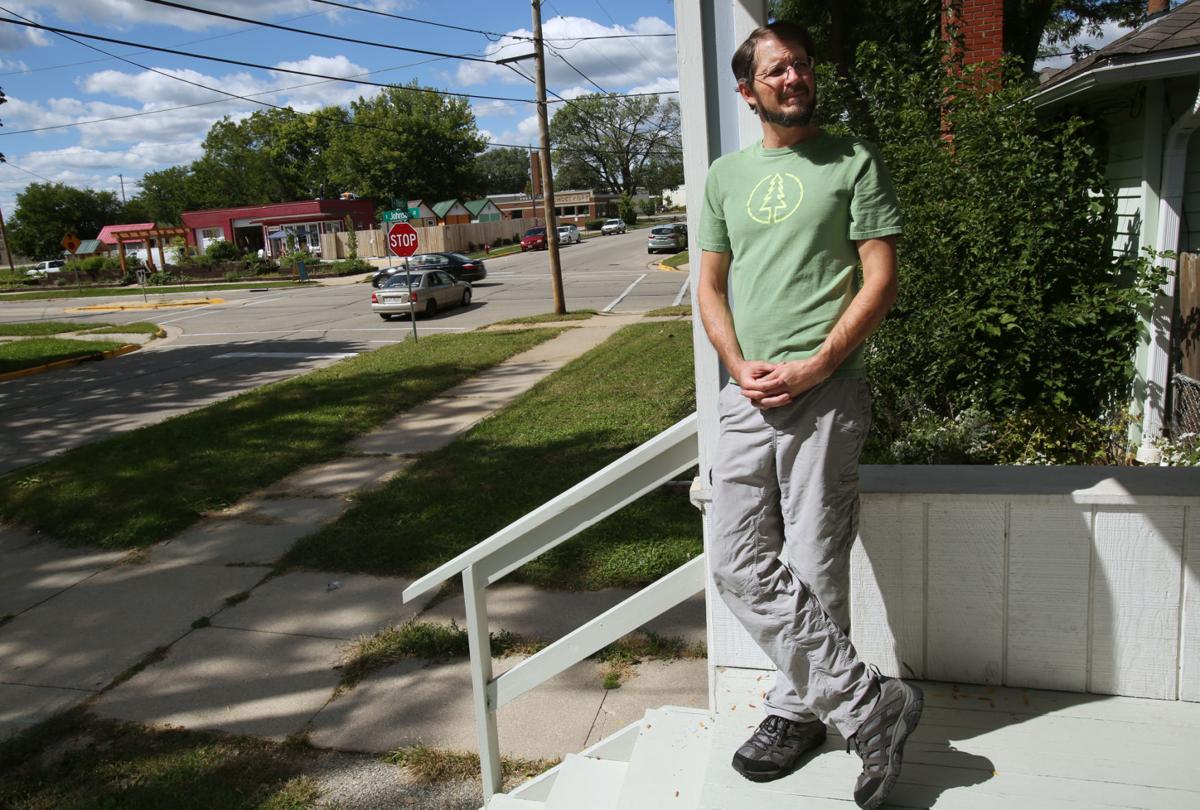 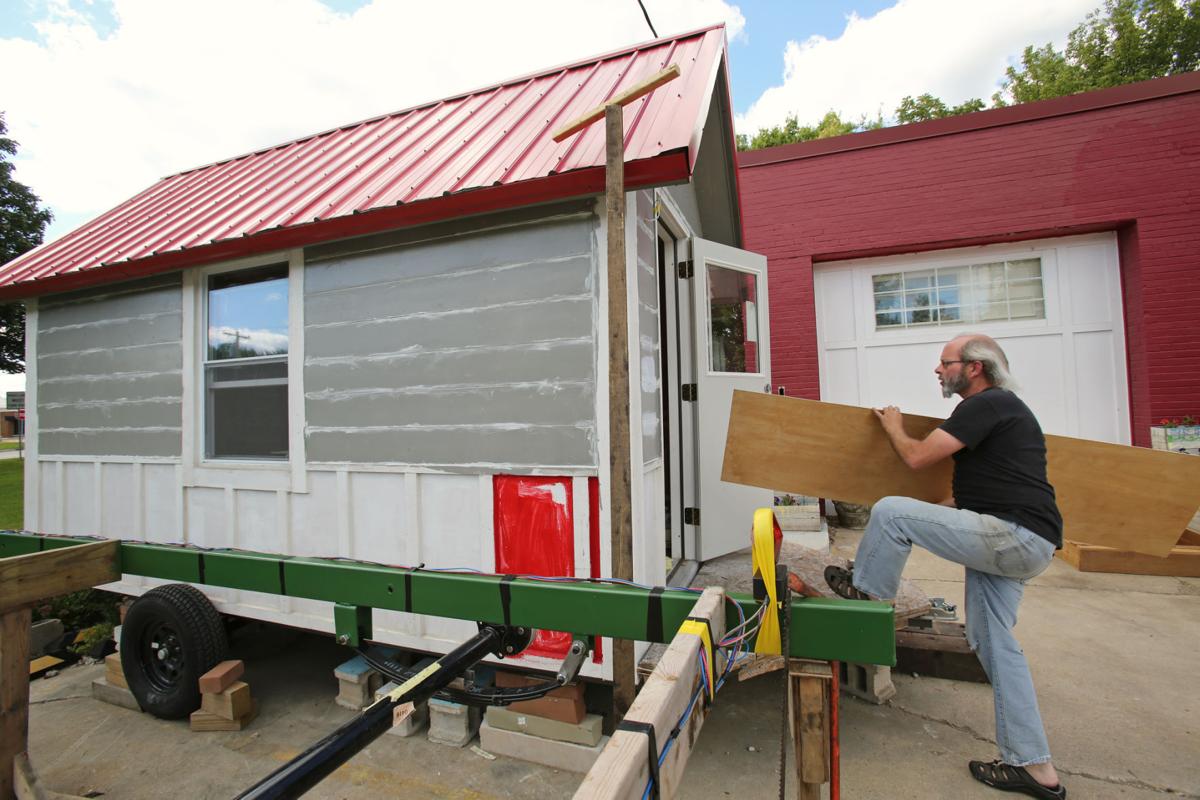 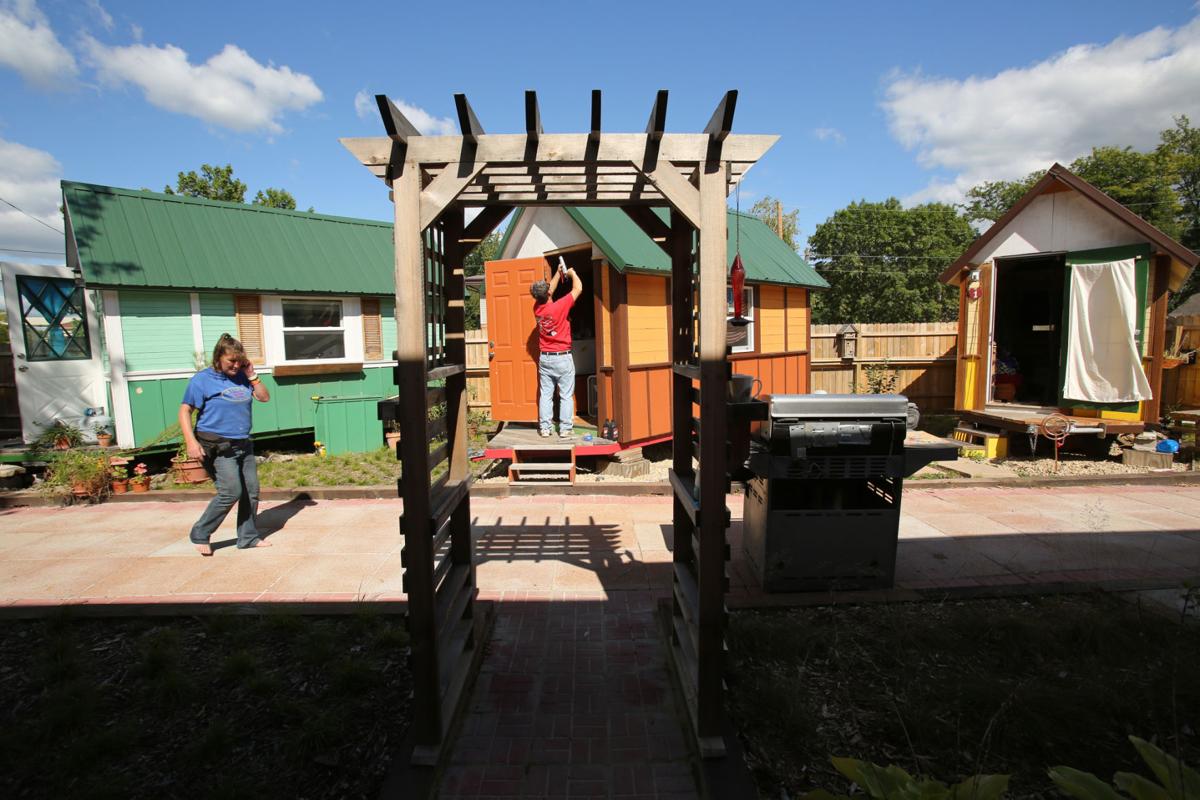 Homeowner Chad Barnes probably has the best view in the neighborhood of the village of tiny houses that sprung up last fall on Madison’s East Side.

From his front porch, he can see the entirety of the site now being used to shelter formerly homeless people. It was an idea Barnes initially opposed.

“I think a lot of the resistance was a knee-jerk reaction, a ‘not-in-my-backyard’ reaction, and I had it at first, too,” said Barnes, 38, who signed a petition to fight the idea but has now changed his mind. “I think it’s actually added value to the neighborhood.”

In extensive interviews with neighbors, many of whom initially fought the tiny village idea, the State Journal heard many similar comments and almost unanimous praise for the first year of the social experiment.

A review of housing assessments, home sales and police calls also found no evidence so far of the dire consequences critics predicted for the neighborhood.

Ald. Larry Palm, who represents the area and early on convened four neighborhood meetings about the tiny village proposal — two of them quite contentious — said no one has complained to him about the village since it went in.

Palm voted for the idea and remains a big supporter. He said the challenge will be to sustain its early success.

“The city retains oversight” through its permitting process, Palm said. “If it begins to fail, I will be the first one to ask for a review.”

The idea’s rarity can be seen in the attention it’s getting — visitors from 23 states and several countries have been to Madison specifically to observe the tiny village and how it operates, organizers say.

The village is a project of Occupy Madison Inc., a nonprofit organization that grew out of a national movement in 2011 criticizing corporate culture and income inequality. So far, five people are living in three tiny houses, each 98 square feet and costing about $3,500.

The site, 304 N. Third St., has room for nine houses. A fourth house is expected later this year, a fifth one in the spring.

Occupy Madison took ownership of the property in late May of last year and spent months upgrading the property. A former auto body shop on the site was remodeled into a communal building with bathrooms, showers, a store and a workshop to build more houses.

Residents are called “stewards” because they don’t own the tiny houses, though they must contribute at least 500 hours of sweat equity to get a house. The first residents moved in last November.

When the idea surfaced, neighbors hired an attorney and drafted a petition. Twenty-three people who owned or rented property directly opposite the proposed site signed on, representing 70 percent of the people in an area legally defined by city statutes as being potentially most affected.

The petition predicted the tiny village would be “extremely disruptive to its neighbors.” It would “lower the city’s tax revenue by lowering property values,” the signers said, and increase the cost of municipal services as a result of nuisance complaints and increased police calls.

The issue of police calls to the site can be dealt with quickly — there haven’t been any, according to the Madison Police Department.

The city’s zoning office said it has received a handful of noise complaints from a neighbor about the operation of saws at the site. Zoning administrator Matt Tucker described the complaints as minor and said they were dealt with by reminding Occupy Madison to close the garage bay doors while sawing.

Homes near the tiny village continue to increase in value at rates consistent with the rest of the city, according to the city assessor’s office. However, those assessments are based on a geographic area larger than just the blocks adjacent to the tiny village. A truer measure of the neighborhood’s health might be home sales in the immediate vicinity.

In July of last year, Joe Andrews put his home at 205 N. Third St. on the market. Although he did not support the tiny village idea, he said the sale was necessitated solely by a job switch out of state. The house sold in a couple of weeks for $235,000, which was $12,300 above the city assessed value.

Karen Nicar, who bought the house, said she and her husband plan to use it as a rental property. They had researched how Occupy Madison planned to manage the site and had no concerns, she said.

In December, Rebecca Bearjar sold her house directly across from the tiny village at 2045 E. Johnson St. She did not oppose the tiny village development but sold the house because she had moved to Wausau and did not want to be a landlord, she said.

The house took about six months to sell, Bearjar said. The purchase price of $129,800 was $17,700 below its assessed value, but that was largely because the house was in need of a lot of work, she said. The cost of a new roof, for instance, was deducted from the purchase price.

“I thought it was a fair deal,” she said.

The tiny village does not appear to have triggered a neighborhood exodus, with at least one exception. Morgan Aten, who spearheaded the petition drive, left Madison almost immediately after the City Council approved the development in May of last year. She confirmed her family’s move in an email but declined to comment further.

Many of those who signed the petition now speak warmly of the tiny village.

“They are very quiet, nice people. Very clean,” said Patricia Ceron, who rents a house directly across from the tiny village.

Homeowner Don Irwin initially was concerned “it would be like Woodstock over there,” but he said the summer went pretty well. Irwin said his primary concern remains — that the full contingent of nine houses is too dense for the site.

“So let’s see how things go in the years ahead,” he said. “I hope they keep up the good work.”

Homeowner Sandra Finn said she and her wife, Linda Yeager, signed the petition only because they were concerned that the street area near the tiny village site floods during hard rains, potentially causing problems for the residents.

“We quite enjoy them as neighbors,” Finn said. “They’ve done everything they said they’d do with the site.”

Many neighbors said the tiny village is more attractive than the body shop it replaced.

Another concern of the petition signers was that Occupy Madison would not have the ability or fortitude to evict a resident for bad behavior. However, in February, through a majority vote of the Occupy Madison membership, the organization indeed did evict one of the early residents of the village.

The former resident “grossly violated” a majority of the terms in the village’s code of conduct, said Luca Clemente, an Occupy Madison volunteer and vice president of its board. He declined to provide further details out of respect for the former resident’s privacy.

“We do not need people to be perfect to live here, but there is a point where addiction or mental illness cannot work with this model of community living,” said Clemente, who called the eviction process painful.

Gene Cox, president of the Occupy Madison board and a resident of the tiny village, abstained from the eviction vote but said he supports the action the membership took, for the most part. He hopes the organization is never again faced with that scenario.

“We’ve been kicked around enough as homeless people,” he said. “We don’t need to start kicking each other.”

Caught up in a budget impasse, homeless to lose daytime shelter in Downtown Madison

The center at Bethel Lutheran Church is expected to close at the end of January.

Occupy Madison officials say the finances for their tiny village project are solid but that fundraising will be a constant necessity.

Betty Ybarra and Christopher Derek have been living out of their 98-square-foot home on the city's streets, but soon they'll become the first residents of a tiny village.

The second and third structures, just 98 square feet each, could be ready for occupancy as early as this week.

In the Spirit: Churches run into obstacles on path to hosting 'tiny houses'

Several congregations have pursued the idea, but so far none has been able to make it work.

The work of longtime Madison architect Edward Kuharski can be seen all over town, but his latest project may end up being one of his most memorable. 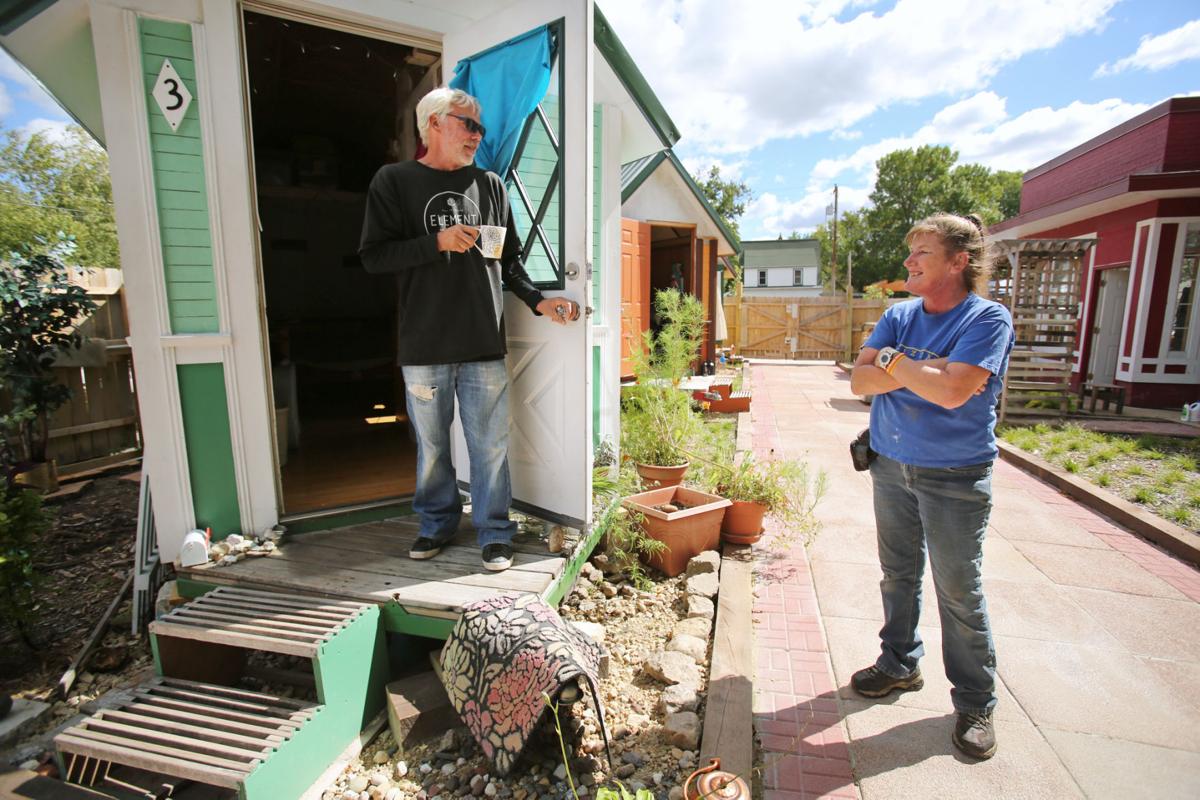 Christopher Derek, left, talks with Betty Ybarra outside the residence they share at the tiny house village on the corner of North Third and East Johnson streets on Madison’s East Side. Many former critics have now warmed to the village’s presence in the neighborhood. 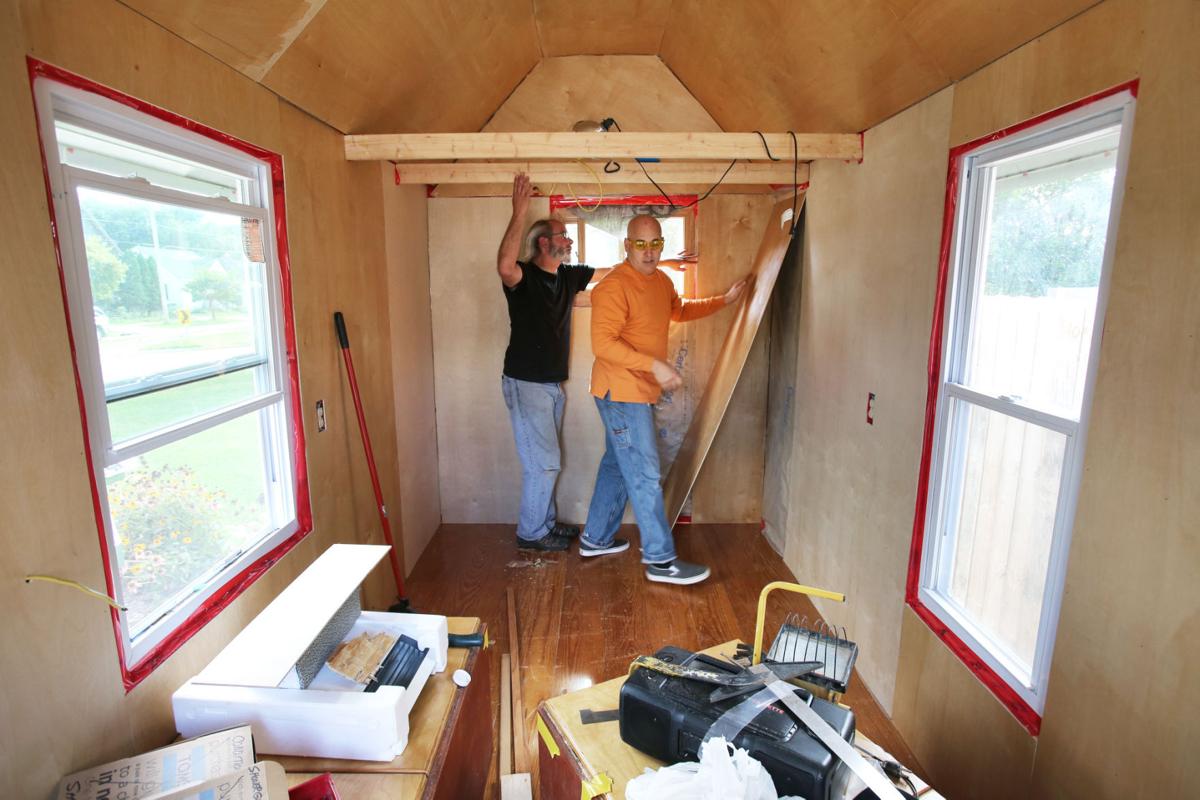 Gene Cox, left, a resident of Madison’s tiny village, and Luca Clemente, a volunteer with Occupy Madison, work to install birch paneling to the interior walls of a tiny house. There are five people living in three houses on the site, each 98 square feet. Two more are planned in the next eight months or so. 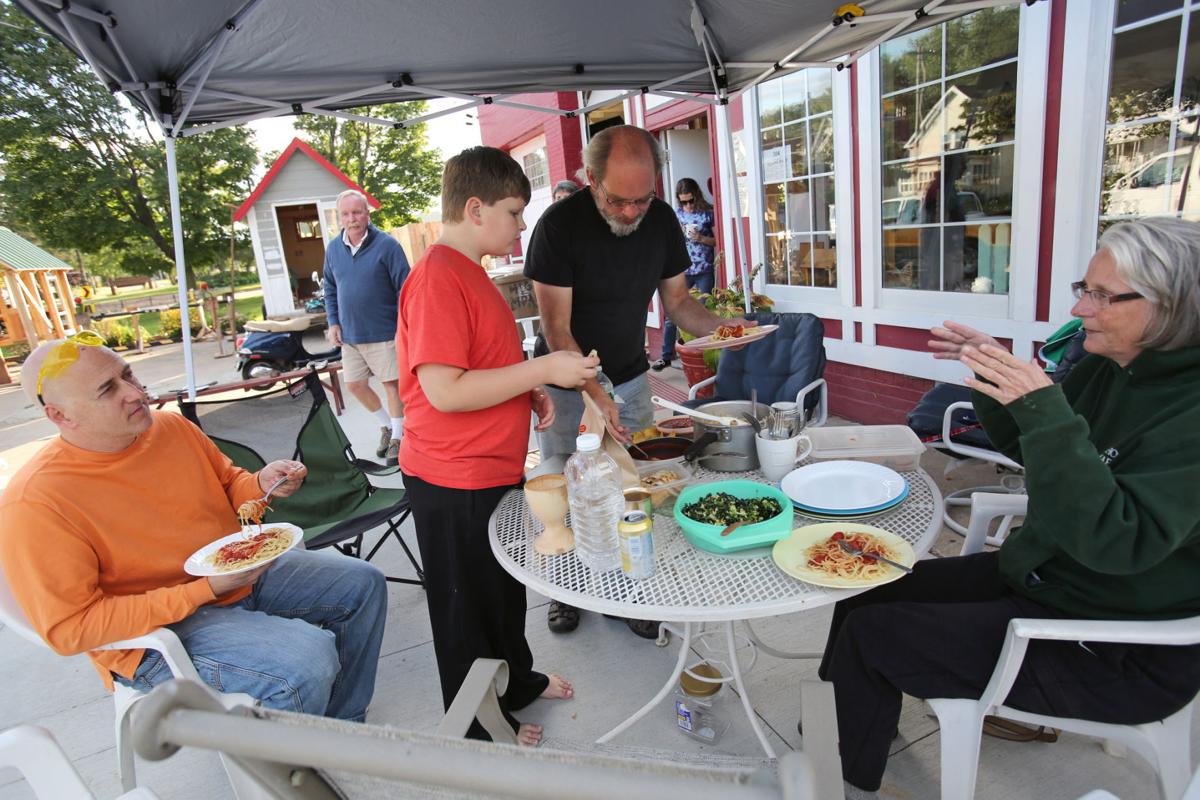