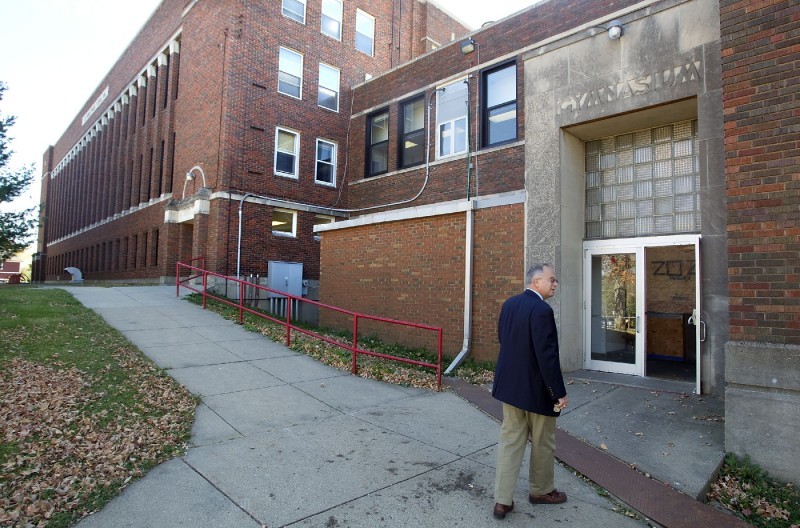 Wayne Anderson, superintendent of the Mount Horeb School District, enters the gymnasium of the Mount Horeb Primary Center. The school opened in 1917 with the gym added in 1940. A Nov. 2 referendum will ask voters for $9.9 million to renovate the building into a more modern facility. 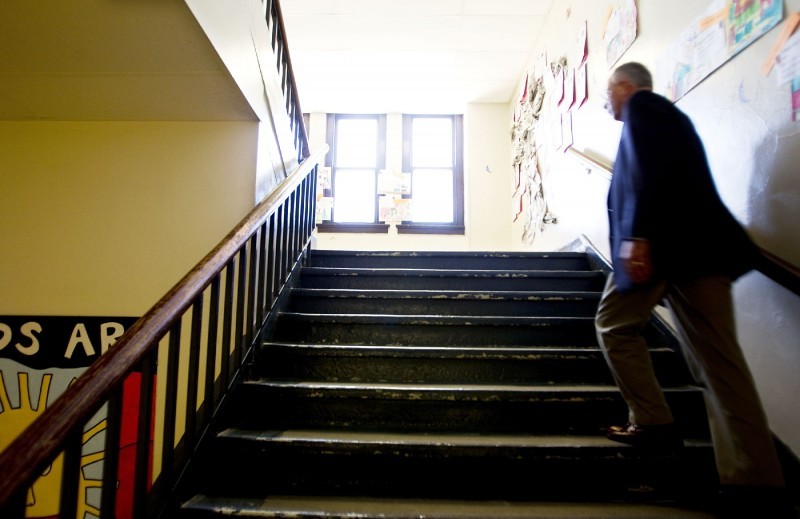 Staircases can be found throughout the historic Primary Center in Mount Horeb. The only handicapped-accessible restrooms are on the first level, meaning long trips on an elevator and through corridors for those who can’t use stairs. 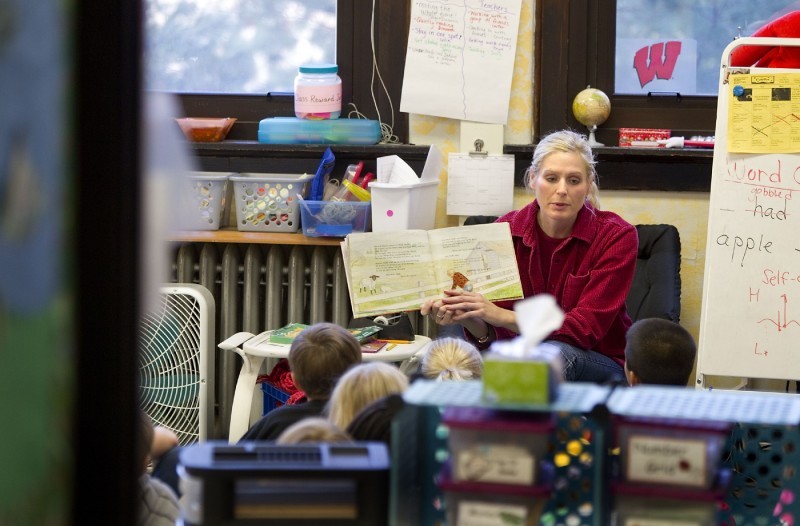 If approved, a proposal to remodel the Mount Horeb Primary Center would include 18 new classrooms to replace the smaller rooms now used by teachers and guidance counselor Krisann Weier, shown here giving a lesson last week to students.

MOUNT HOREB — A glimpse of how students were educated here in the late 1800s is located under the downtown water tower, just a half block off Main Street.

But there is another historic school in this village of 6,500 people that's getting more attention than the cream-colored brick District 1 School built between 1884 and 1889.

On Nov. 2, Mount Horeb School District voters will decide whether to spend $9.9 million to remodel the Primary Center, a three-level school building opened in 1918 with a maze of steps and two gigantic boilers. A second referendum question asks for $600,000 for a geothermal heating system.

The building has served generations of students and all grade levels. It was the high school before the current one was built in the 1960s and where Kurt Nowka, a 1977 Mount Horeb High School graduate, went to middle school. The brick building, which looks similar to West and East high schools in Madison, now is used by second- and third-grade students.

"Let's be a little green," said Nowka, a local preservationist. "Let's not throw out something that has good bones."

Nowka knows a solid building when he sees one. He has maintained his 1890s home on North Second Street to reflect the period in which it was built. He's also helping to shepherd renovation of the one-room District 1 School across the street from his home.

The schoolhouse originally was a few blocks to the west, and it was the third school building constructed in what was then a railroad town along the Military Road, a snaking oxen path designed to connect Fort Crawford in Prairie du Chien with Fort Howard in Green Bay.

It's the oldest remaining school building in the village and is being restored by the Landmarks Foundation, a community organization committed to historic preservation.

"It has absolutely been a community project," said Nowka, a member of the foundation, which has used grants and donations to fund the $200,000 project, which included moving the building in 2002. "This building is meant to be for the community."

Nowka feels the same way about the Primary Center, which is on the National Register of Historic Places. The building is solid but the interior out of date and worn. The building is also an energy nightmare. In the winter, students on the top floor wear T-shirts and teachers open the windows to fight the heat, because of the antique heating system.

According to school board estimates, remodeling is less expensive than building a new 79,200-square-foot school attached to the nearby Early Learning Center. That project, which would be about 8,000 square feet larger than the remodeled Primary Center, would cost an estimated $12.8 million.

District voters have supported other school referendums in the past.

The Primary Center's campus is lined with oak and maple trees and is nestled along Academy Street, in a classic small-town neighborhood.

A few blocks to the east, school buildings and athletic fields have sprouted. The high school anchors the area and was built in 1962 with a $7 million addition completed in 1997 — approved in a 1995 referendum by 100 votes.

The Primary Center has drawn the attention of Superintendent Wayne Anderson since he took the job in 1996, but it's the first time the school will be the subject of a referendum.

"This has always been an item of discussion every time we've had a referendum," Anderson said. "I think we have people who have an attachment for nostalgia's sake, but I think we have others who say that it is still a usable building, it's structurally sound and it makes sense to at least look at the renovation of it first."

The Nov. 2 referendums should provide a solid measurement of the community's sentiment; turnout is expected to be high with races for governor and Congress on the ballot.

If approved, students would move to the Early Learning Center and Intermediate Center for the 2011-12 school year while the interior is removed and then replaced from roof to basement. The following fall, students would return to a new school within the historic walls masoned together during World War I at a cost of $115,000.

"Without a doubt, that building is historic," Nowka said. "The community made huge sacrifices to build that building. It's a tank of a building."

Barry Adams covers regional news for the Wisconsin State Journal. Send him ideas for On Wisconsin at 608-252-6148 or by e-mail at badams@madison.com.

Here are some other area school districts with Nov. 2 referendums:

Wayne Anderson, superintendent of the Mount Horeb School District, enters the gymnasium of the Mount Horeb Primary Center. The school opened in 1917 with the gym added in 1940. A Nov. 2 referendum will ask voters for $9.9 million to renovate the building into a more modern facility.

Staircases can be found throughout the historic Primary Center in Mount Horeb. The only handicapped-accessible restrooms are on the first level, meaning long trips on an elevator and through corridors for those who can’t use stairs.