TOWN OF SPRINGFIELD — After more than a year of work, the 1385 remains in pieces.

The restoration of a historic but worn locomotive takes time, patience, diligence, precision and money.

Perfection is the goal.

So when an open house is held next weekend at SPEC Machine near Middleton to show off the progress of the 108-year-old steel and cast iron behemoth, visitors should keep their expectations in check.

Improvements are clearly noticeable when compared to the open house of a year ago. The $2 million rebuild, however, still has a long way to go before the 60-ton showpiece from the Mid-Continent Railway Museum in North Freedom is reassembled and connected to a tender car filled with coal.

“We’re making progress,” said Peter Deets, the last volunteer at the museum to fire the locomotive’s engine before it was taken out of service 17 years ago. “It’s very near and dear to my heart. The amount of work done in the last 15 months has been phenomenal.”

The 1385’s history is rich and its restoration tied to the future success of Mid-Continent. The nonprofit museum’s collection is all about railroad equipment from between 1885 and 1915, when steam locomotives moved 90 percent of the nation’s passengers and freight. The 1385, which is on the state and national registers of historic places, has the potential to draw thousands of tourists each year to the museum, located a short drive from Wisconsin Dells in rural Sauk County

The locomotive was built by the American Locomotive Co. in Schenectady, New York, and was a workhorse for the Chicago & North Western Railroad from 1907 to 1956. When it retired, Mid-Continent members scraped together $2,600 to buy the locomotive in 1961.

From 1963 to 1998, the locomotive pulled cars on the museum’s 3.5 miles of track and in the mid-1980s, pulled the Circus Train for three straight summers from Baraboo to Milwaukee and back. In the 1990s, it made trips on the mainline to Brodhead, Mazomanie and Wausau.

When the restoration project is completed, the 1385 will become the only operating C&NW steam locomotive in the country and one of only eight that have been preserved.

“When I look at it, I know what (it) can be and that’s the drive to keep it going,” Don Meyer, project director of the restoration effort, told me in 2011. “I know the impact that it has on the general public.

When I visited the museum four years ago, the 1385 was covered in rust but still assembled and sitting on a set of tracks out of the way of the operating engines at the museum.

Last February I found it in pieces after it had been shipped and taken apart by Steve Roudebush and Bruce Grill at their machine shop on Riles Road. When I visited their shop just over a week ago, deep cracks on the 40-foot-long, 10-foot wide chassis had been repaired and the frame given a fresh coat of black paint.

Parts littered the shop. The 4-foot-long pistons with a 22-inch bore, for example, had just been brought in from a barn, while 300-pound drive boxes, foot castings, springs and trucks were in various stages of repair.

But not all of the work is being done at SPEC Machine.

The wooden cab for the locomotive is in Fond du Lac, where it is being used as a model for a new cab. The 25-foot-long boiler will also be new. Originally built with rivets, Hamon Deltak, a manufacturer of industrial boilers and gigantic combustion turbine heat recovery steam generators in Plymouth, Minnesota, is scheduled to begin making a welded boiler this summer.

The engine’s three sets of 63-inch diameter drive wheels also had a different look. Last March they were shipped to Pennsylvania, where the restoration shop at Strasburg Rail Road replaced the band of steel that surrounds each of the six wheels that makes contact with the track. The drive wheels, one set that weighs 15,000 pounds, returned a few weeks ago looking brand new.

And that’s the goal of Roudebush and Grill, master machinists who love and respect history.

“It’s going to be perfect,” Roudebush said as he showed off the locomotive’s parts. “It’ll be better than when it left the factory.”

One of the jobs involves replacing about 150 bolts on the chassis. Each is 6½ inches long and 13/8 inches thick, with a 2-inch head. All of the bolts are being made in the shop using state-of-the-art CNC machines and lathes.

The same goes for a major part on the bearing box assembly, where 60-pound slabs of bronze that cost $430 each are milled to 1,000th of an inch. It takes only a few minutes to complete each part. “I feel like we’re cheating compared to the old days,” Grill said, as the cutting tool sprayed shavings of bronze.

Roudebush has taken more than 8,000 photos of the restoration, which has included work by museum volunteers. It’s unclear when the locomotive will make the return trip by flatbed truck to the museum but Roudebush is already mapping out the logistics.

Fundraising is ongoing and organizers of the open house are hopeful that the event, held on the same weekend as the Mad City Rail Show, will create more buzz about the ambitious project.

Grill and Roudebush have used old photos, history books and over 700 blueprint drawings from the Lake States Railway Historical Association in Baraboo to guide them through the restoration process. They also have a 1908 edition of Modern American Railway Practices, a series of encyclopedias on locomotive construction.

Another set of 14 books from 1910 have titles that cover topics like engine management and installation, steam engine and valve gears, riveted joints and “Pumps for Various Purposes.”

Google can only help so much.

“They are used all of the time,” Roudebush said. “We’re trying to keep everything straight and true.”

An open house will allow the public to take a look at the restoration of the 1385 locomotive owned by Mid-Continent Railway Museum. The locomotive has been out of service since 1998 but is undergoing $2 million in work designed to make it operational.

What: Open house for the 1385 locomotive

On Wisconsin: Documenting the creation of a Driftless gem

The $700,000 construction of the boiler and firebox to begin for No. 1385 steam locomotive owned by Mid-Continent Railway Museum

After three years of design and fabrication in St. Louis, the 41,000 pound boiler is lowered onto the frame at SPEC Machine in Middleton. 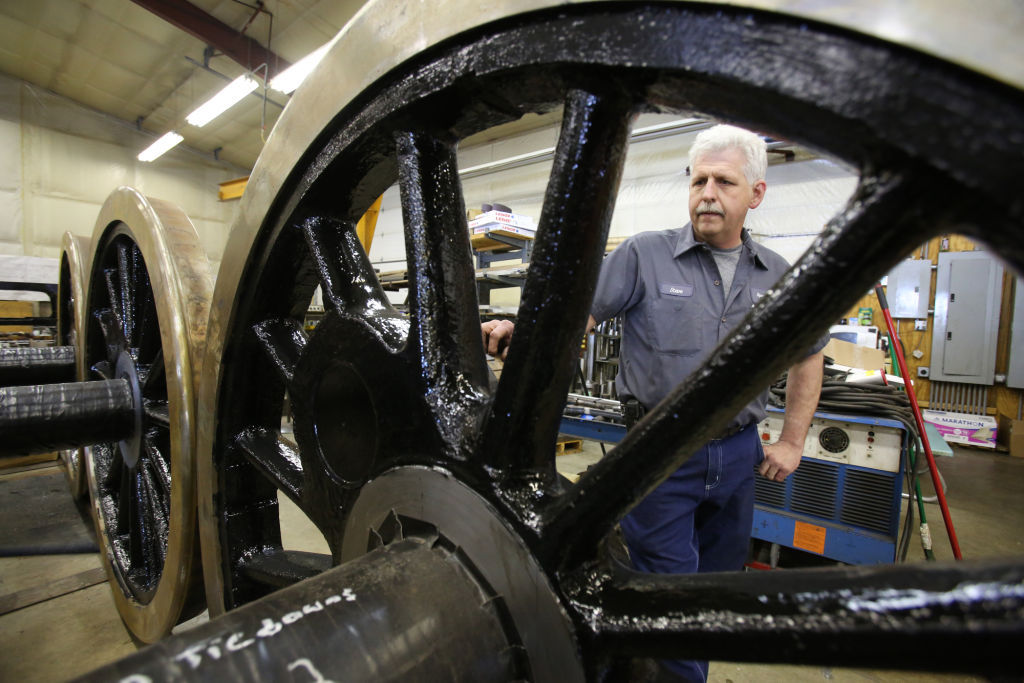 Steve Roudebush, co-owner of SPEC Machine near Middleton, inspects the recently restored drive wheels of the 1385 locomotive owned by Mid Continent Railway Museum in North Freedom. The steam engine, constructed in 1907, is undergoing a $2 million restoration. Roudebush and his partner Bruce Grill are doing most the work at their machine shop. 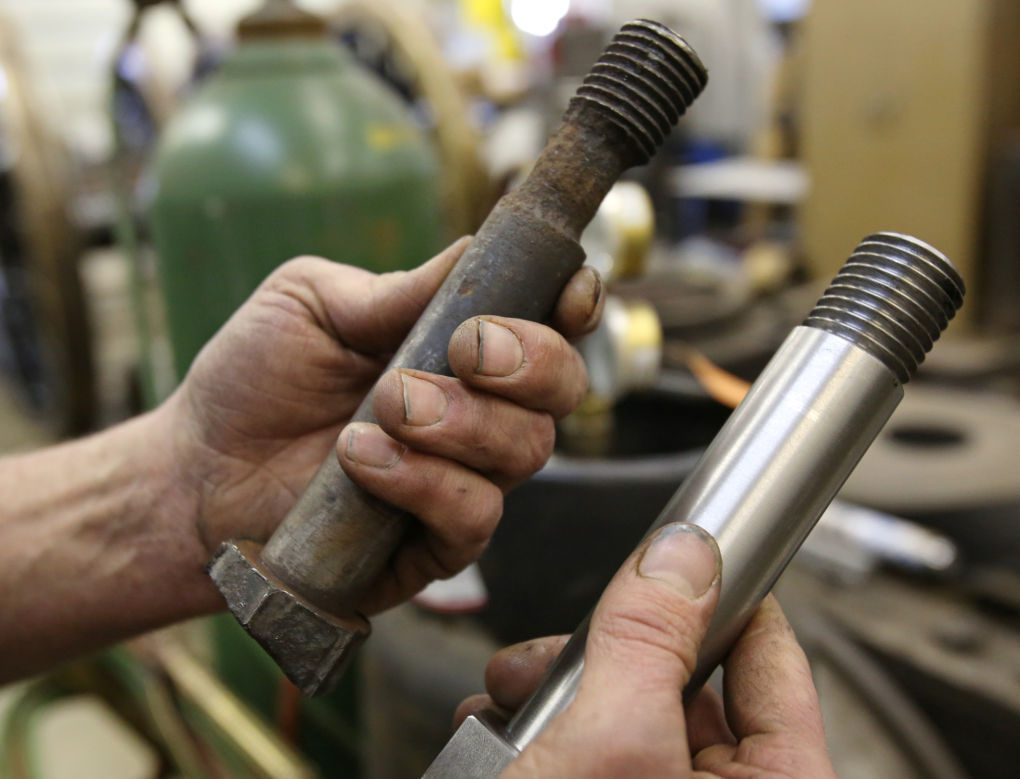 Steve Roudebush shows off an old bolt left with a new bolt made at his machine shop for the 1385 locomotive. About 150 of the six inch bolts will be machined during the restoration of the 108-year-old locomotive. 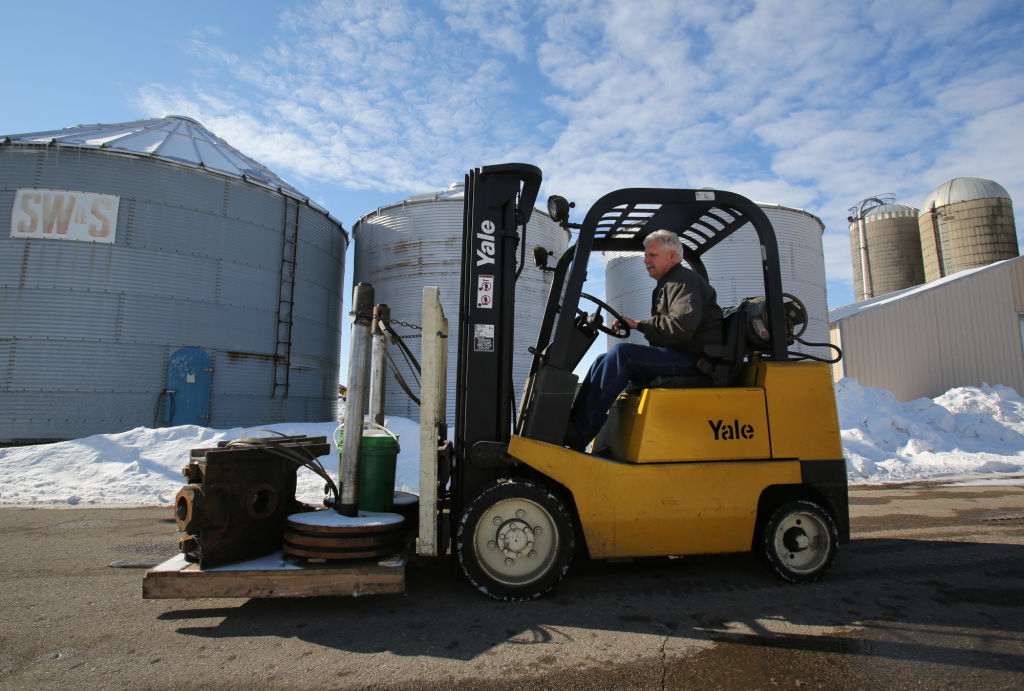 Steve Roudebush uses a fork lift to haul locomotive parts from a storage shed and into his machine shop for restoration. This load included the steam pistons for the 60-ton historic locomotive. 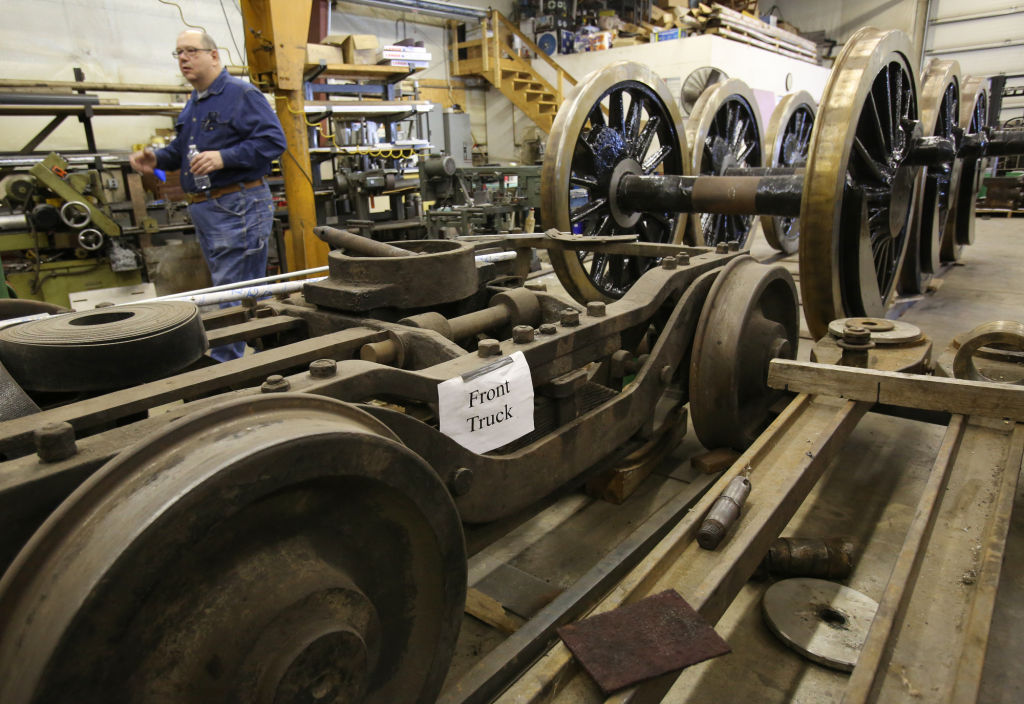 Pete Deets, a longtime volunteer at the Mid-Continent Railway Museum and a member of the restoration task force, walks past the truck for the front of the 1385 locomotive. The truck is awaiting restoration work while the drive wheels located behind it have already been restored. 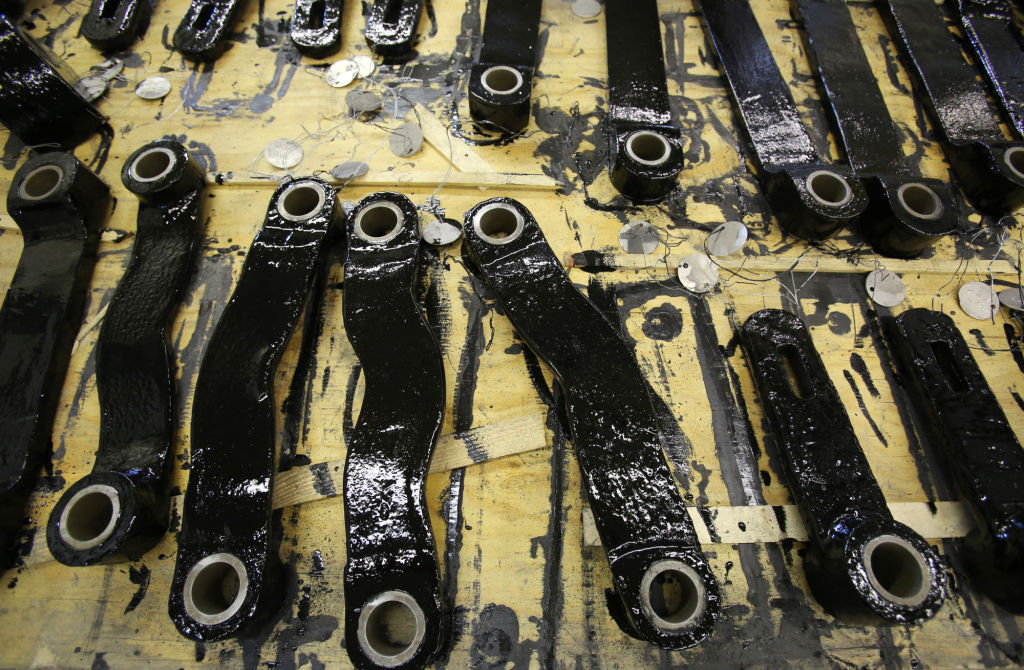 Train parts lay out to dry after being painted during the $2 million restoration of the Mid-Continent Railway Museum's 1385 locomotive at SPEC Machine near Middleton.