A 6-foot-tall cast-iron freight scale used in the 1880s at the train depot, a 1928 calendar from the Skalitzky Mill and a hulking fanning mill to separate grain seeds from the chaff and made here in 1869.

The repository that is the Waterloo Area Historical Society Museum is crammed with artifacts, documents and photos from this city’s history. They are here to be preserved and protected. And the clock tower, at least this weekend, will help remind the locals that daylight saving time has come to its end.

But care is now being taken to ensure the largest piece of the society’s holdings is sustained for decades to come. The project is critical to the physical stability of the society and the emotional investments made by those who have worked for years to make sure history here is not forgotten.

“So many people have given so much of their energy,” said Maureen Giese, as her voice cracked and her eyes welled with tears. “We have so much here. If we don’t do it, who’s going to do it?”

Giese, president of the historical society, is leading the charge to repair the museum’s clock tower that was added in 1888 to St. Joseph’s Catholic Church, constructed in 1869 on Polk Street, just south of the city’s downtown. The former church has been home to the historical society since 1976, but the brick on the tower has been crumbling and is in need of repair.

For the past three weeks, a small crew from Menomonee Falls-based Statz Restoration & Engineering has been working to repair the brick and mortar of the clock tower while its leaking roof also needs attention.

There was brief talk of removing the clock tower, but Giese and others say the structure is too important to the city. While it was built in 1888, its three clocks weren’t added until 102 years later. The tower also holds a cast-iron bell believed to have been manufactured in the 1850s by the Meneely Bell Company in Troy, New York, and installed at the time of the tower’s construction.

Jim Reynolds, a member of the historical society, says it has been more than a year since they began noticing fallen mortar and small pieces of bricks at the base of the church’s stone foundation and the front stoop.

“Early this spring we got the binoculars out and started looking up there and scared ourselves half to death,” Reynolds said. “We could see bricks that were loose, mortar gone. The inside of the tower was starting to worry us, too, because bricks were falling and there were loose bricks inside the tower.”

Waterloo is home to internationally known bicycle manufacturer Trek; Van Holten’s, the pickle-in-the-pouch company; and McKay Nursery, but has struggled to recover from the loss of 700 full-time jobs after the Perry Judd’s printing plant closed in 2004.

What isn’t lacking in this Jefferson County city dissected by Highway 19 is history.

The first white settlers arrived in the area in the 1830s, with the community settled in 1842 by Bradford Hill, who brought his family from New York by covered wagon to build a cabin along the banks of Crooked Creek, now called the Maunesha River. The city was chartered in 1859, the same year the railroad arrived. St. Joseph’s was built 10 years later.

Other notable historic items that have survived include the water tower constructed in 1910, Firemen’s Park and the 1911 C.W. Parker Carousel saved from ruin by firefighters during the floods of 2008, later restored and believed to be the oldest operating carousel in the state. Music for the carousel comes from a 1915 band organ from the North Tonawanda Musical Instrument Works in New York state.

But the historical museum housed in the old church is a comprehensive collection of all things Waterloo. It includes a stool from the ice cream counter at Whipple’s Drug Store, works from noted calendar artist Zulu Kenyon and surveying equipment that might have been used by Nathaniel Hyer, who founded the town of Aztalan and assisted in laying out many of the territorial roads in the 1830s.

The museum also holds information on Tom Hamilton, the longtime radio voice of the Cleveland Indians who grew up in Waterloo. One of the most noticeable pieces in the museum is a mural depicting Waterloo history and painted in 1977 by Fred Wurzbach at the front of the former church.

But for now the focus is preserving the building’s exterior so that the historic collections inside are safe.

Jared Crocker and Kurt Schwarting, who work out of Statz Restoration’s Baraboo office, used a pair of boom lifts last week, one of which could extend up to 125 feet. Their company has done work on dozens of historic structures in the Madison area, including Bascom Hall at UW-Madison and the Machinery Row buildings along Williamson Street.

The project for the Waterloo Historical Society has the men using bricks likely made in Watertown or Milwaukee over 100 years ago and salvaged from old buildings in southern Wisconsin. The project also includes tuck pointing, cleaning years of dirt and grime from the existing bricks, and rehabbing and painting the wood-louvered vents.

“We’re kind of bringing it to life again,” Crocker said. “She needs some work. It’s weathered up there but for being over 100 years old, it’s definitely one of the better buildings I’ve worked on. You don’t see them in this good of shape, especially with the weather we get.”

Crocker and Schwarting are doing their work while being careful not to disturb the clock faces, which make for a good story on their own.

When the tower was built, the congregation ran out of money for clocks that were intended to be installed on all but the south side of the tower. A clock fund was started shortly after the museum moved into the church in 1976 but it wasn’t until 1990 that the electric clocks were installed.

The clock faces, 6 feet 8 inches in diameter, were bought from Gmeinders, a machine shop in Marshall, for $6,420, but installation and other work associated with the project brought the cost to about $18,000. The clocks are in good shape, but Schwarting said it’s typical for brick buildings to need tuck pointing and a good cleaning, which should keep the tower true for decades.

“This brick, it just sucks the carbon out of the air,” Schwarting said. “That’s what gets it black. It’s a very porous brick.”

Barry Adams covers regional news for the Wisconsin State Journal. Send him ideas for On Wisconsin at 608-252-6148 or by email at

Funds are still being sought to help with the restoration of the exterior of the Waterloo Area Historical Society Museum, housed in the former St. Joseph's Catholic Church.

On Wisconsin: Elk return to Jackson County but are a tough find

Spotting a 700-pound elk in a 320-square-mile area isn’t a guarantee, but the animal is building excitement along the Interstate 94 corridor of Jackson County.

The three-day event started Friday and features some of the best cheese in the world, including the winner of the World Championship Cheese Contest.

On Wisconsin: Brats, jambalaya and Lambeau

LSU and Badgers fans combine for a tailgating extravaganza around storied Lambeau Field.

1,000 pounds of flour (and many more ingredients) brings Lebanon together

The two-day cookie, craft and soup sale, billed as the largest in Wisconsin, wraps up today at St. Peter's Evangelical Lutheran Church in this Dodge County farming community of 1,645.

Pickle in a Pouch scores another major retailer

Van Holten in Waterloo announces a deal with Dollar General that will put its pickles in 13,000 stores. 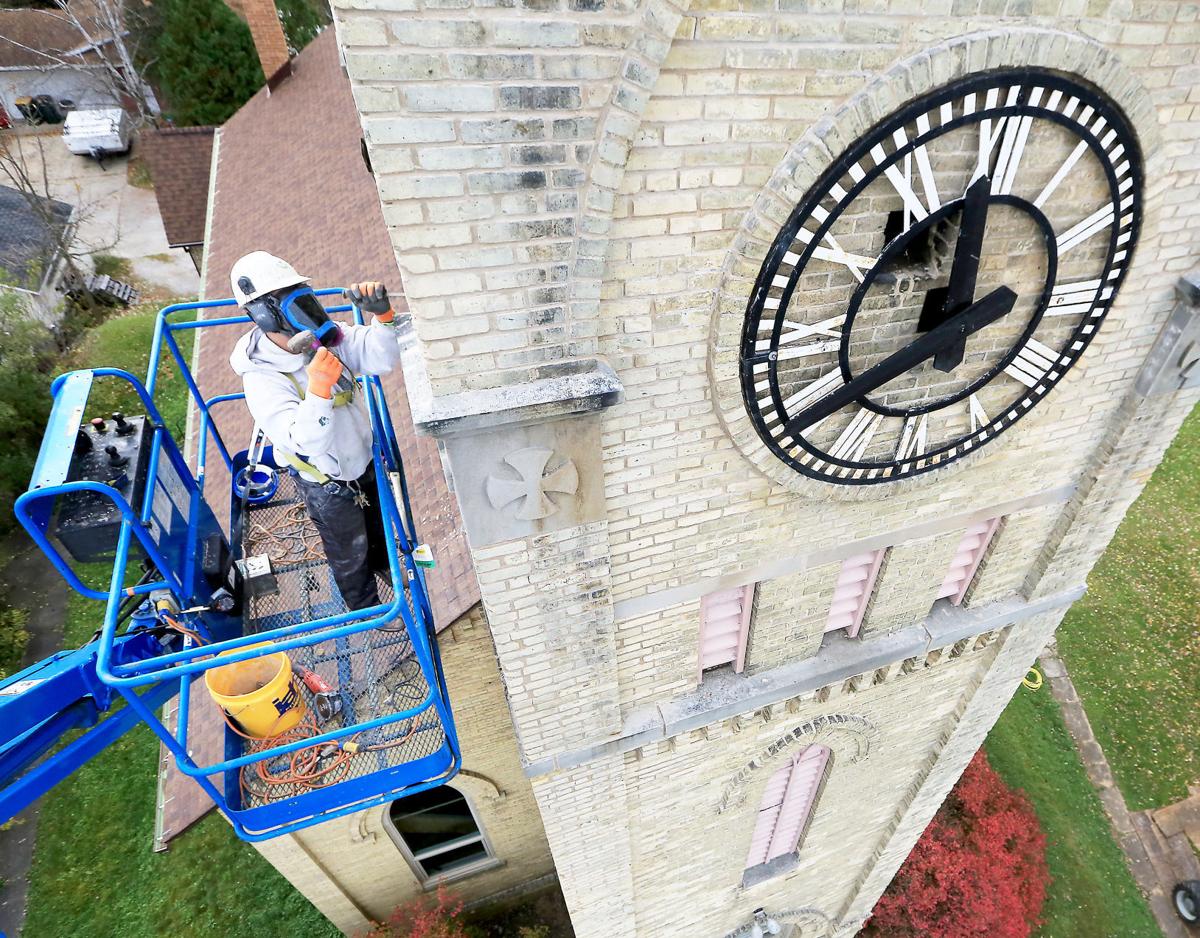 Kurt Schwarting of Statz Restoration & Engineering works on the mortar joints of the clock tower above the Waterloo Area Historical Society Museum. The museum is housed in the former St. Joseph's Catholic Church, built in 1869.  The clock tower was added in 1888, but the clocks weren't installed until 1990. About $45,000 of the estimated $55,000 needed to restore the tower has been raised. 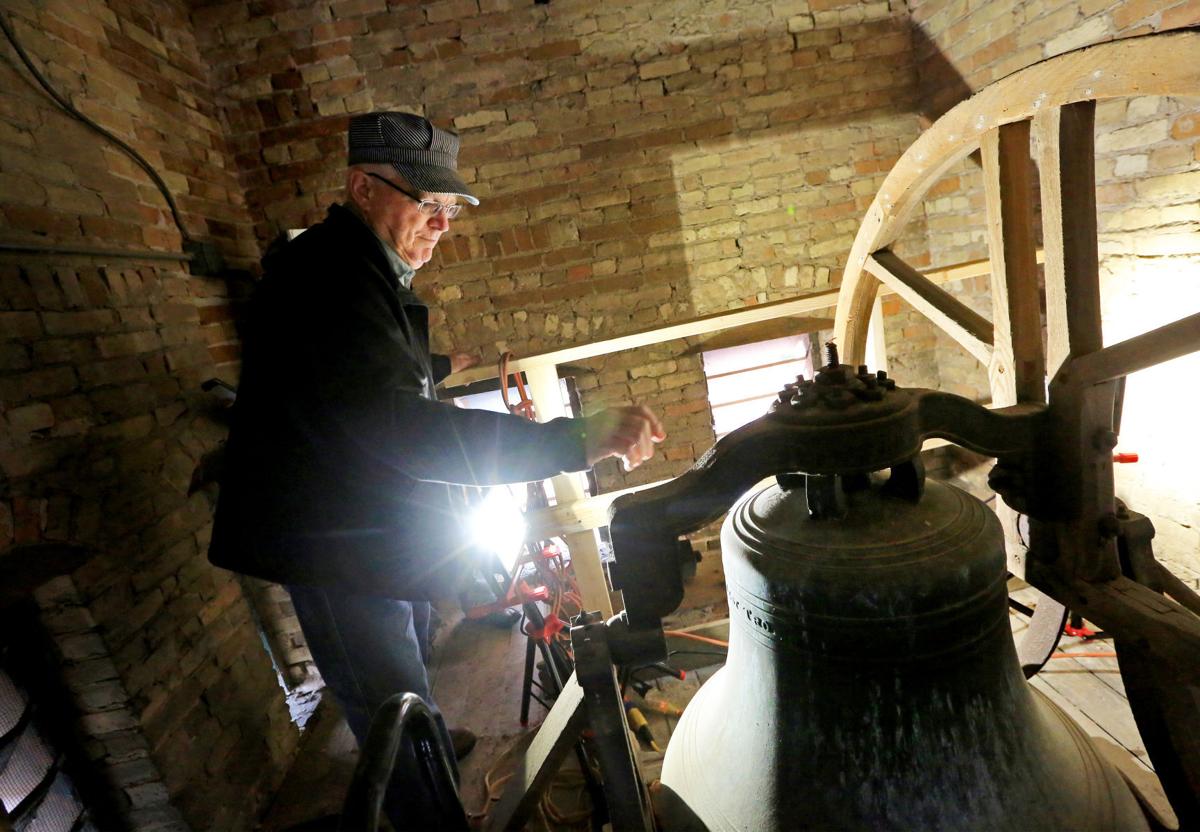 Jim Raymond views an 1850's-era church bell housed in the bell tower above the Waterloo Area Historical Society Museum in Waterloo. The bell was made by the Meneely Bell Company in Troy, New York, and installed in 1888 at the time of the tower’s construction. 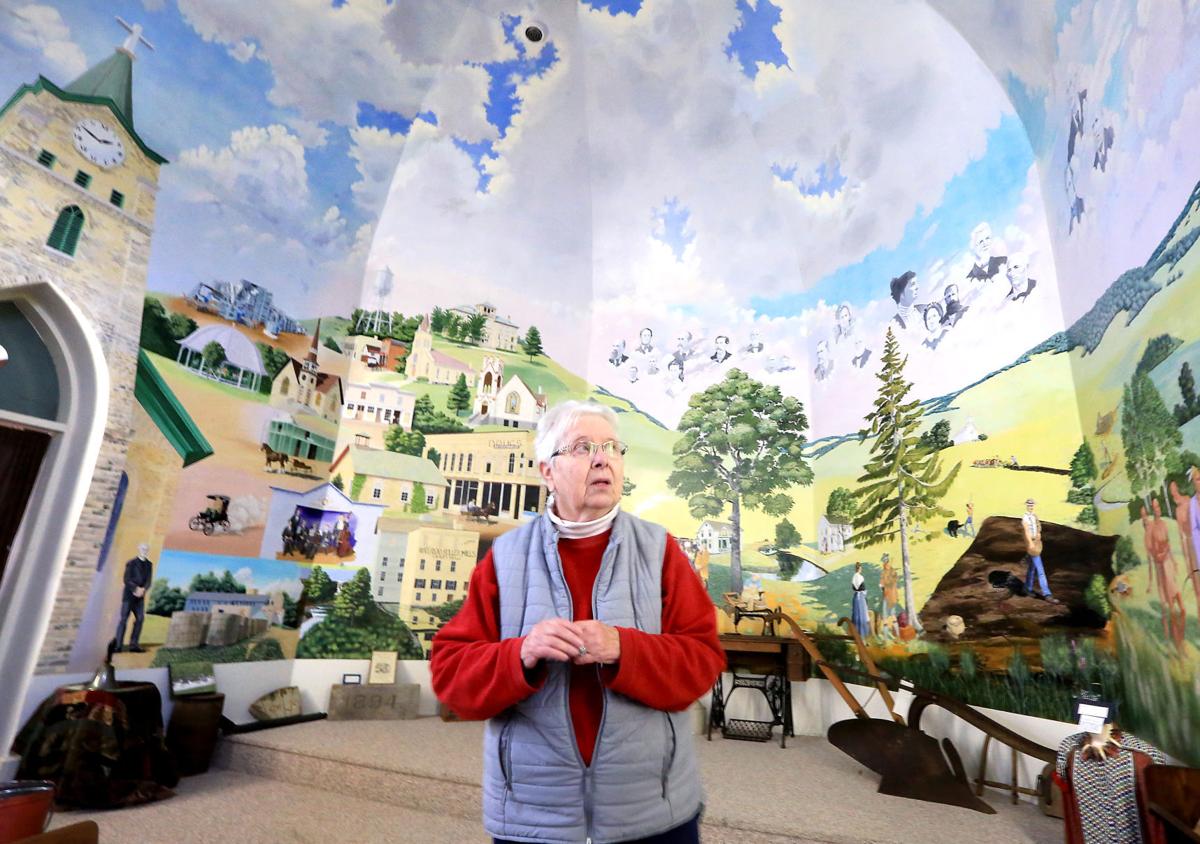 Maureen Giese, president of the Waterloo Area Historical Society, shows off the mural painted in 1977 inside the former church that now houses the society's museum The mural depicts events, businesses, people and places of Waterloo, including the clock tower, left, built in 1888 for St. Joseph's Catholic Church. The Historical Society purchased the church in 1976 after St. Joseph's built a new church home. 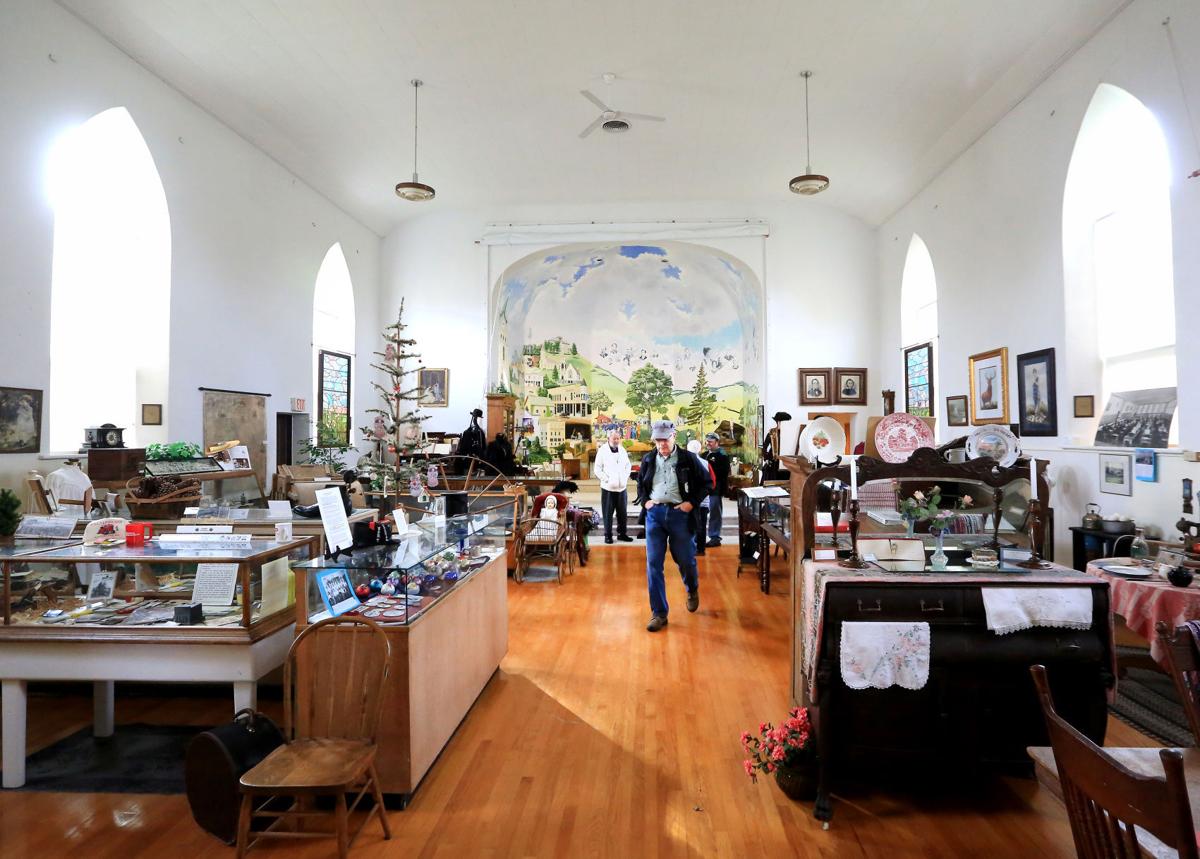 Instead of pews, the sanctuary of the former St. Joseph's Catholic Church in Waterloo is filled with artifacts of the Waterloo Area Historical Society. The former church serves as the society's museum and is under restoration. 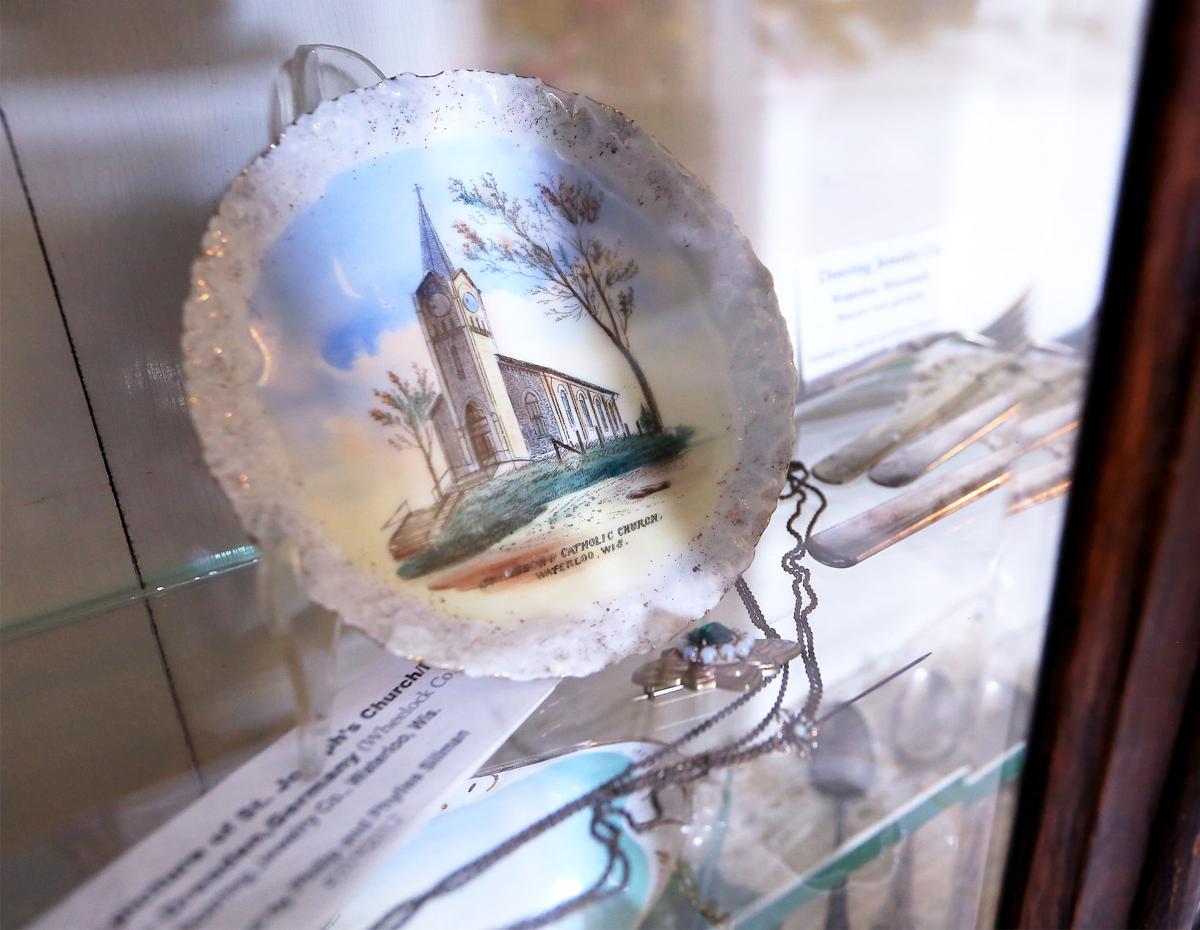 A plate commemorating the former St. Joseph's Catholic Church in Waterloo is among the items displayed in the Waterloo Area Historical Society Museum. The museum has called the former church home since 1976. 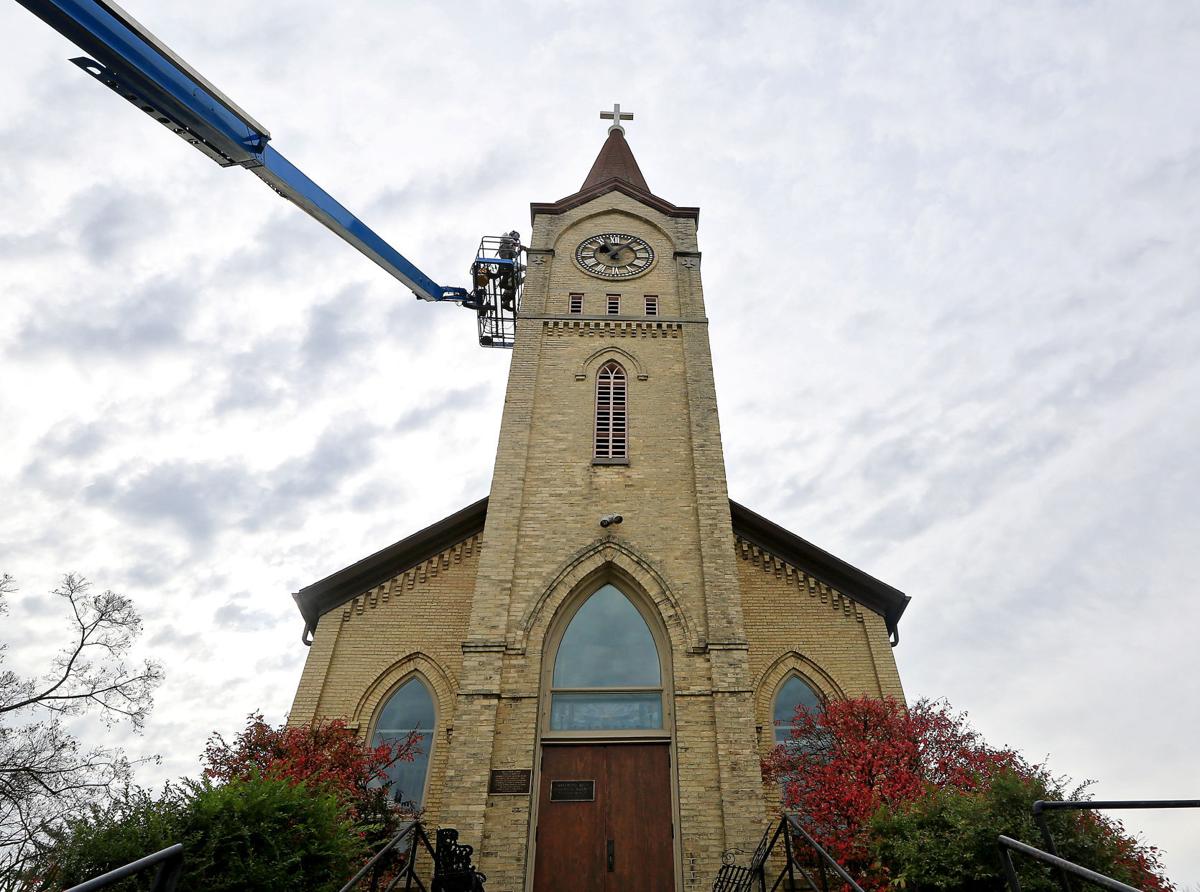 Kurt Schwarting, of Statz Restoration & Engineering, uses a 125 foot long boom lift to reach the east side of the clock tower at the Waterloo Area Historical Society Museum. Bricks and mortar are being repaired and replaced on the tower that was constructed in 1888 when it was St. Joseph's Catholic Church.