In October 2011, a senior fellow with a right-leaning Milwaukee-based think tank wrote a column in this newspaper on the Occupy Wall Street movement, which in the wake of the 2008 financial meltdown sought to draw attention to income inequality and the influence of corporations on politics.

Mike Nichols, of what is today known as the Badger Institute, declared the “scattershot, uber-populist movement that has grown shoots everywhere from Green Bay to Milwaukee to Appleton is unlikely to ever amount to much more than sloganizing.”

Occupy Madison — and, more specifically, its current incarnation as the OM Village of “tiny homes” — celebrated its fifth anniversary last month with panels, a historical retrospective, tours, socializing and a fair amount of left-leaning politics.

The development has since late 2014 made its home on a one-third acre lot formerly occupied by a car-repair shop at the corner of North Third and East Johnson streets on Madison’s East Side. It currently includes eight, 99-square-foot homes designed to be outfitted with electricity but no running water; bathroom and kitchen facilities sharing space with a central workshop; and a store selling clocks, birdhouses, Wisconsin-shaped cutting boards, jewelry, OM shirts and other items, many of which are made by residents.

The path from Occupy Wall Street to the Village was not an easy one.

Occupy Madison was launched in October 2011 in the Near East Side Reynolds Park to emulate its bigger New York City cousin, with adherents eschewing party politics and embracing collective decision-making.

But by the time it moved later that month to a vacant lot in the 800 block of East Washington Avenue — now home to a Festival Foods grocery and tony apartment development — it was well along the way to being a homeless encampment of two to three dozen people.

The city kicked them out on May 1, 2012, and over the next two years they made their homes in lots or campgrounds in and near the North and East sides of Madison, including an extended stay at Token Creek County Park in DeForest. There were some 30 temporary locations in all.

In December 2012, Occupy Madison registered with the state as the nonprofit Occupy Madison Inc. By July 2013, the group had settled on the plan to build tiny homes, and the first was completed just before Christmas that year. By January 2014, OM was eyeing its current spot at Third and Johnson, the city approved it in May, two more houses were done in July and the site opened late that year.

With a privacy fence, paved walkway and landscaping, OM Village today could pass for the world’s tiniest gated community or cul-de-sac. It’s seen visits from activists from around the country interested in its small-scale approach to not only building housing for the homeless, but in building self-reliance and marketable skills among the people it seeks to house.

OM Village has had seven total residents on site, although it’s approved for up to nine. The four current ones have all been there several years.

“I feel we’re stronger if we stick together,” said resident Russell Albers, 40, who works in manufacturing.

He said he’s not interested in government-subsidized housing because it comes with government rules.

“I stay here based on to fight the cause. ... It’s a cause to help other people out down the road,” he said. “There needs to be more occupy movements like this one.”

Luca Clemente, co-president of the OM board, said that in order to get tiny homes of their own, residents are required to put in at least 500 hours of sweat equity building them. East and La Follette high school students have been building the homes’ frames, then turning them over to Occupy to finish.

“I did all the insulation and the paneling. I did all the baseboards,” said resident Sofia Martinez, 48, a waitress. “I love it. For two people it’s too much. For one person, it’s perfect.”

The idea behind the Village is not to be a shelter or a temporary stop for the homeless, but a community.

“We allow people to stay as long as they want,” Clemente said. “This model works best for what we call the working poor.”

Brenda Konkel, a longtime advocate for the homeless and progressive activist, said the Village’s budget is about $24,000 a year, and that the nonprofit generally breaks even from month to month. Village members and volunteers emphasize that the group gets no tax dollars.

What the group sells in the shop “more or less takes care of our monthly bills,” Clemente said.

Although it has a board of directors, a budget and official nonprofit status with the state and federal governments, OM has sought to remain faithful to its anti-establishment roots.

Decisions are made by consensus, a process that might take a long time, according to board member Allen Barkoff, but “no one walks away from these decisions feeling like they’ve been disrespected and that’s the good thing about it.”

Clemente said he’s sometimes asked why the Village doesn’t have more people, but “we have to have a culture of mutual respect, and that takes time to foster.”

He called such social cohesion Occupy’s “real framework” and said that, without it, bringing in a bunch of homeless people to live there could be a “nightmare.”

“No one here pretends that this kind of model is going to solve the homeless problem,” Barkoff said of the tiny house village. “But this is a part of it.”

While there were concerns at first that OM Village would bring the kinds of behavior, mental health and substance-abuse problems often associated with the homeless, city officials today agree that the endeavor has been largely problem-free.

Police report no serious issues at the location, and building inspector George Hank said “the location has not been a problem.”

“The last case was in 2015, and it involved trailers that appeared finished but were not moved to approved sites,” Hank said, adding that “on a personal note, I live a couple of blocks away and I have not heard concerns from my neighbors.”

Heidi Wegleitner, who represents the area on the Dane County Board and lives about two blocks away from Occupy, said the “village has been a wonderful neighbor.”

OM Village resident Gene Cox, 45, said stereotypes about the homeless “go away when you have people living around us.”

OM Village is currently raising money for a 432-square-foot addition to the main building that would include a kitchen, laundry, dining area and community area, with a three-season porch attached.

The group hopes to begin construction in August on the $150,000 project. Konkel said it already has about $50,000 in the bank for the work.

Barkoff said much in American society remains unchanged since the 2008 financial meltdown that led to the Occupy Wall Street movement — including the existence of complicated financial instruments, people who go without health insurance, a federal minimum wage that hasn’t increased since 2009 and, on East Washington Avenue where Occupy once set up shop, “a lot of high-rise buildings that only people of means can afford.”

“It’s these conditions that really lead toward homelessness and many other bad situations for a number of people,” he said.

But he said improvements in homeless services locally are in part attributable to OM’s work and advocacy, and points to the opening in 2017 of the city’s first homeless resource center and the “housing first” approach to homelessness that the city adopted in 2014.

"The temporary use is needed so people don't freeze this winter," Occupy Madison co-president Brenda Konkel said. "It's literally a matter of life and death for some folks." 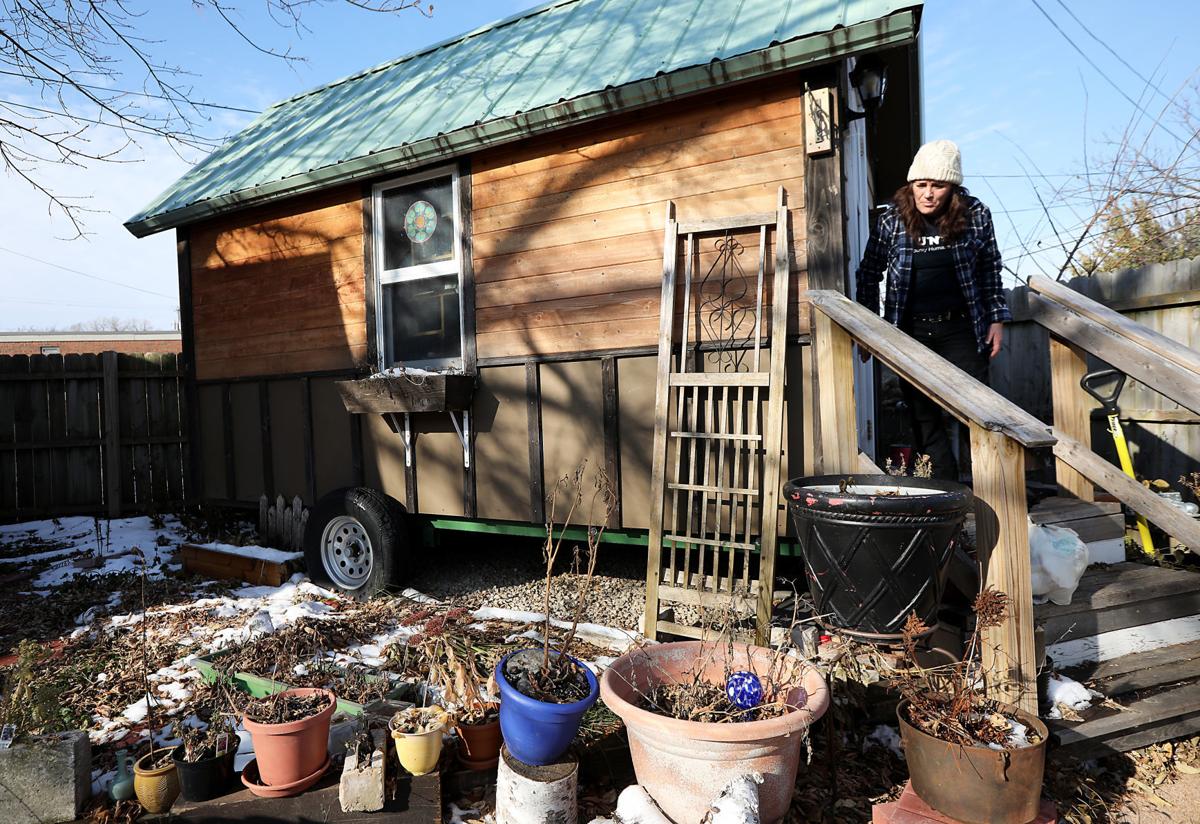 Sofia Martinez looks over her garden outside her home at the Occupy Madison tiny house village on Madison's East Side. The village began as a local incarnation of the Occupy Wall Street movement, morphed into an itinerant homeless encampment and is today a five-year-old nonprofit providing housing to a handful of working poor. 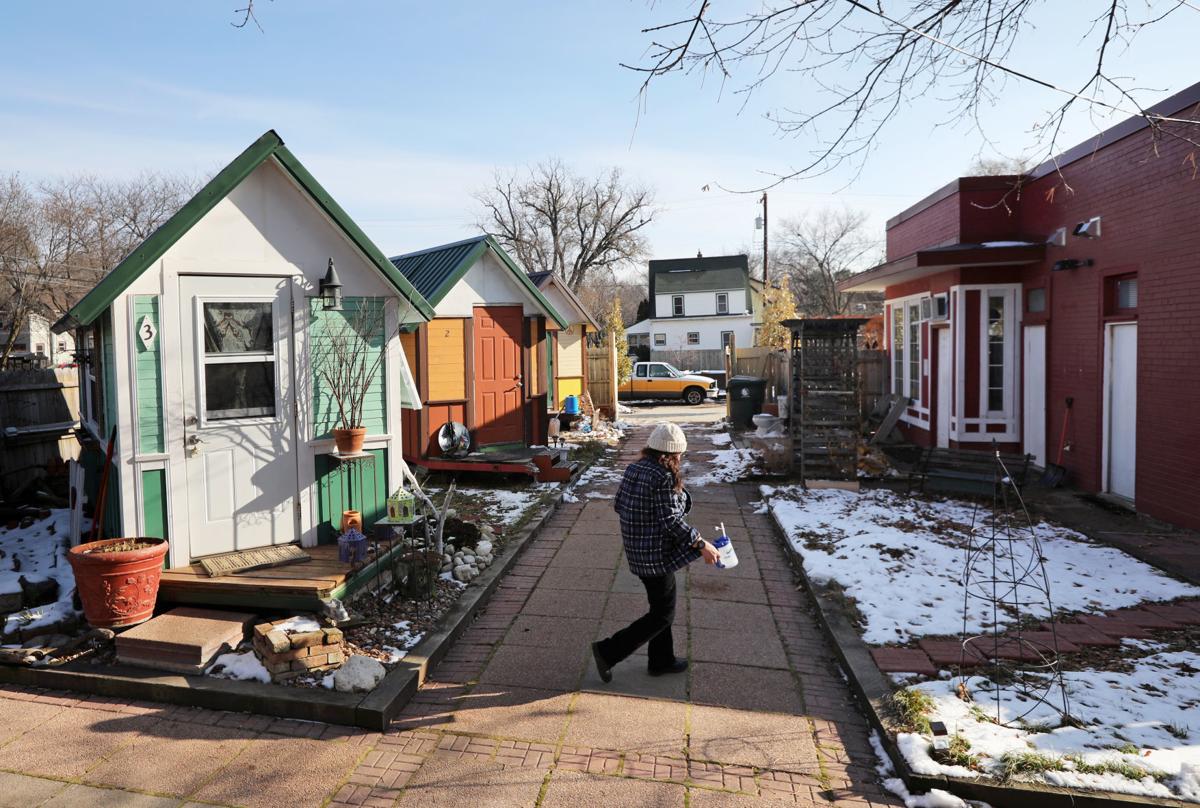 The village can host as many as nine residents in their own 99-square-foot homes. 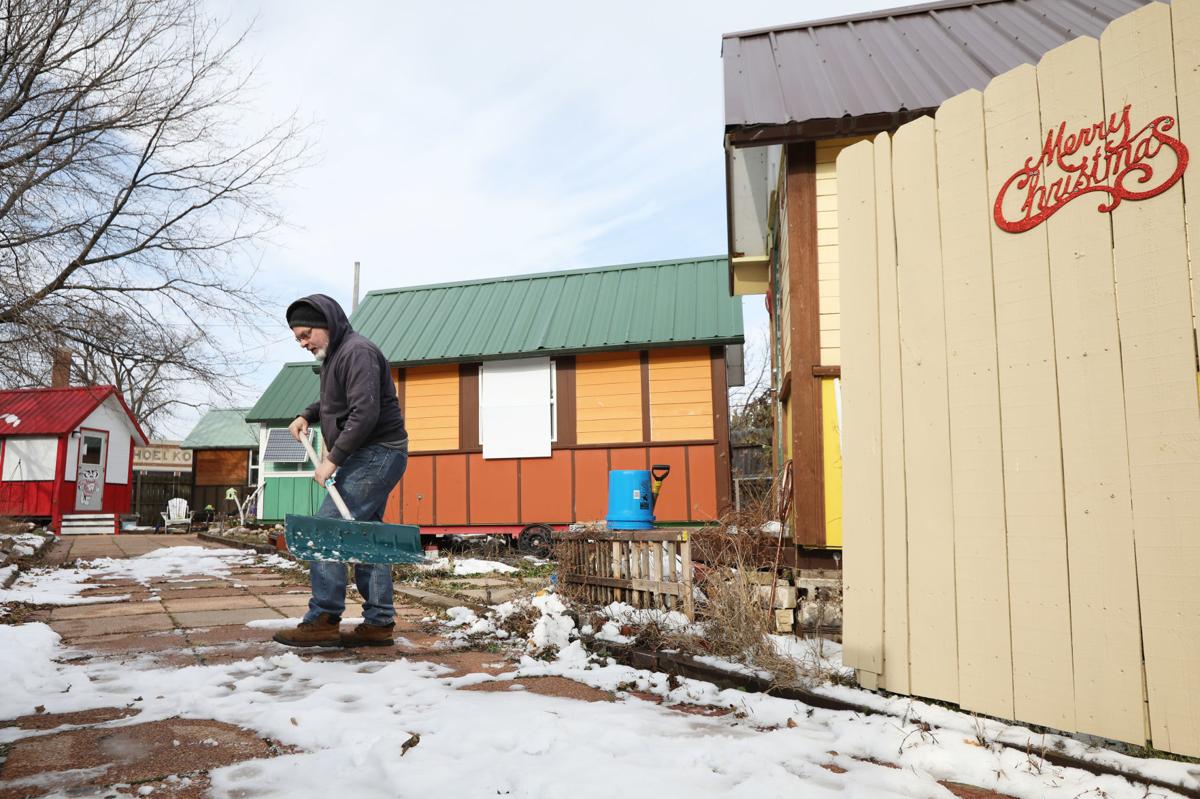 Gene Cox, a resident of the Occupy Madison tiny house village, shovels snow in a common area outside his home. 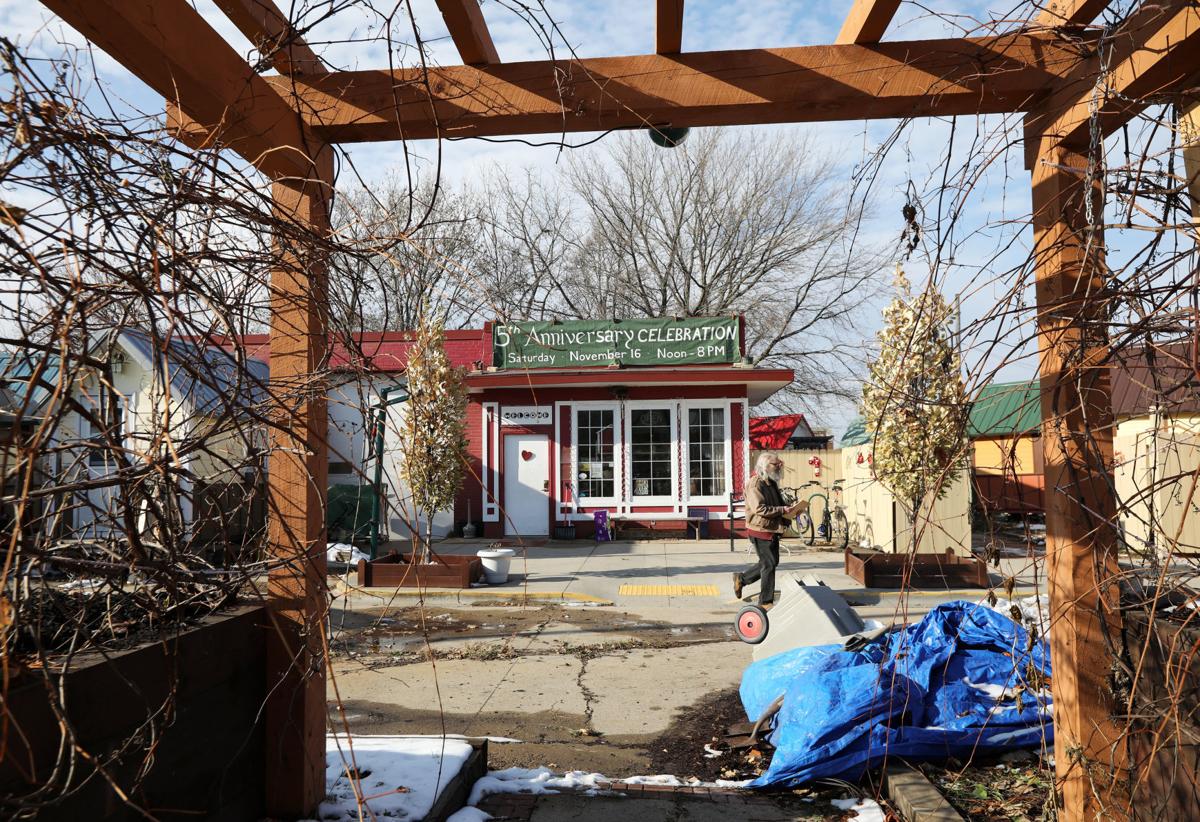 Residents of OM Village must put in 500 hours of sweat equity to get their own homes. 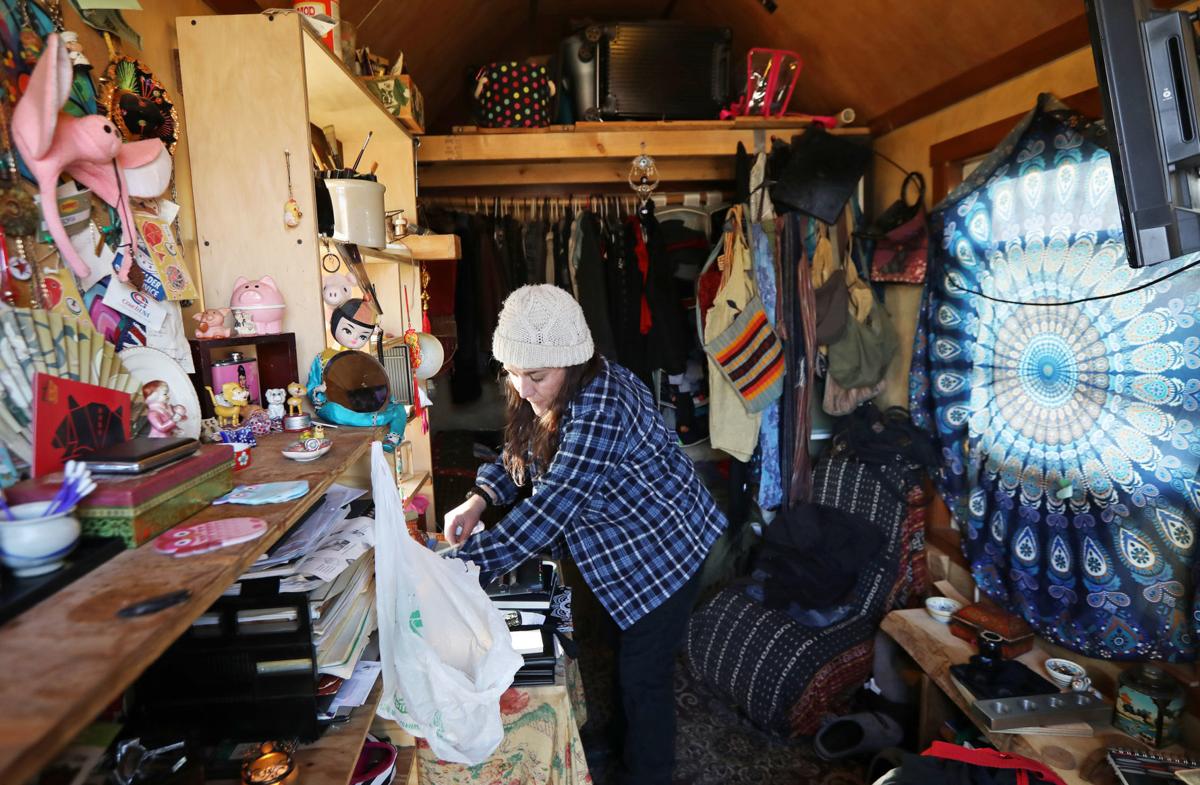 Sofia Martinez says her tiny home at the OM Village is just right for one person. 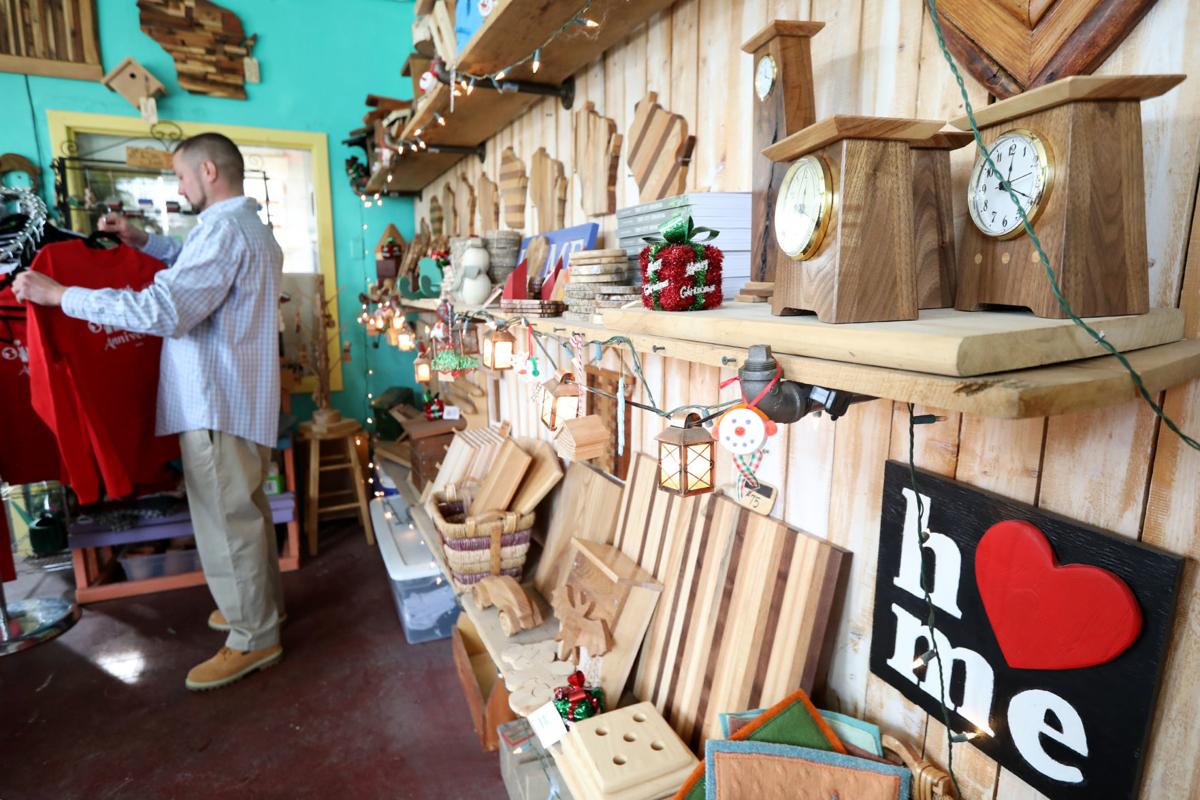 The store at the tiny house village includes cutting boards, bird houses and other items made by residents. Sales from the store largely cover the village's monthly expenses.