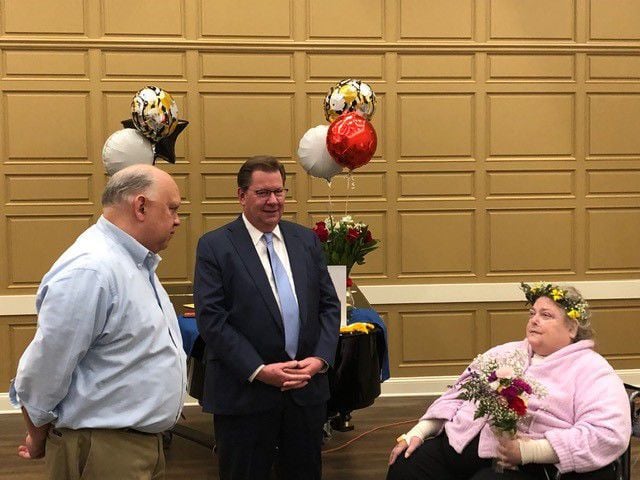 Michael Leon, 56, and Jacqueline Captain, 62, are married at the Capital Lakes nursing and rehabilitation facility on March 3, after 22 years together, by friend Dale Gregory. 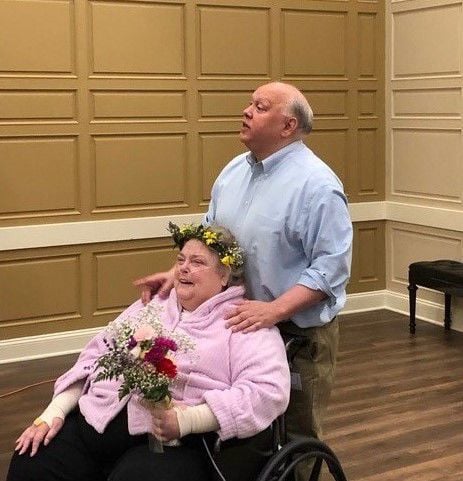 Leon with his wife Captain after they said their "I dos" in front of a few family members and friends. Leon said they had to keep the ceremony small because of Captain's infection. 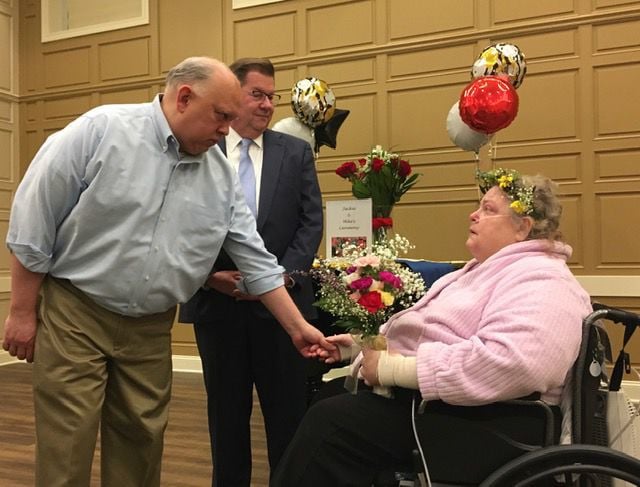 Leon holds Captain's hand as they say their vows to each other during the marriage ceremony, performed by friend Dale Gregory.

March 3 was one of the happiest days for Michael Leon and his partner, now wife, Jacqueline Captain. The couple decided they would get married after 22 years together. Eleven days later, they would have to stop seeing each other.

The nursing and rehabilitation facility Captain has been in and out of since April 2019 with an infection and other health problems decided Saturday to close its doors to visitors due to the COVID-19 coronavirus pandemic.

Many of the people at the nursing facility, including Captain, are highly susceptible to infection and could easily catch the new coronavirus, and Captain said they are no longer allowed to leave their rooms.

Captain, 62, last checked into Capital Lakes skilled nursing and rehabilitation facility the weekend before March 3, when she told Michael there was no time like the present to get married.

“We didn’t know if we were going to be able to get married because I’ve been in and out of hospitals and Capital Lakes,” Captain said. “We kept making plans, setting dates, and I’d end up getting sick again.”

Captain said she was comfortable getting married at the nursing facility because she has spent the most time there in the last year and gotten to know the people there well.

“She said, ‘Go get us married. I don’t care if we do it in the emergency room,’ and I went and got the marriage license,” Leon recalled.

The couple was married by an old friend — attorney Dale Gregory of Fuhrman & Dodge, S.C. in Middleton — in Capitol Lake’s Grand Hall with some 10 people in attendance, including four of Captain’s siblings and some of Leon’s friends. Leon said they had to keep it small because Captain is “still on the mend.”

Leon, a public relations consultant and writer in the Madison area, met and started dating Captain in 1998. They moved in together in 1999 and have lived together since, currently in Fitchburg.

Captain is a project manager in Madison currently on leave due to her health. She formerly worked as a museum curator and was a consultant for the United States Holocaust Memorial Museum in Washington, D.C., before its opening in 1993.

Leon knows his wife is safer in the nursing facility with its doors closed for now, because the new coronavirus could “really do a lot of damage” there. He said he works with the staff there to mitigate feelings of loneliness by making sure Captain is still in touch with the outside world and involved in tasks that need her attention, such as voting by absentee ballot.

“It’s very difficult not being able to see my Jackie,” he said. “For anyone to be isolated during the challenge of recovery, it’s kind of a kick in the gut. But, we’re doing our best.”

Captain, meanwhile, is anxiously waiting for the day the lock down is over.

EDITOR'S NOTE: This story has been updated to correct the name and location of Middleton law firm Fuhrman & Dodge, S.C.

"The impact has been terrible," one taxi manager said. "The only thing that's keeping us alive is medical appointments."

Publisher and co-owner Jeff Haupt said Isthmus was profitable before the coronavirus hit.

Demand for absentee ballots for the April 7 statewide election has now eclipsed demand in all of the last four spring elections as the COVID-19 coronavirus pandemic threatens to keep voters from the polls on Election Day.

But the refund credit on some campuses may be applied to other outstanding bills, such as tuition.

Gov. Tony Evers imposed new restrictions Wednesday, limiting the number of people who can be present, while asking providers to prioritize children of medical providers and other essential workers.

The area will see much warmer weather with highs in the 50s next week, according to forecasters.

Michael Leon, 56, and Jacqueline Captain, 62, are married at the Capital Lakes nursing and rehabilitation facility on March 3, after 22 years together, by friend Dale Gregory.

Leon with his wife Captain after they said their "I dos" in front of a few family members and friends. Leon said they had to keep the ceremony small because of Captain's infection.

Leon holds Captain's hand as they say their vows to each other during the marriage ceremony, performed by friend Dale Gregory.