WILLIAMS BAY — The round, wooden floor here has been a platform for some of the biggest names in science.

Albert Einstein walked its surface in 1921.

So, too, has Subrahmanyan Chandrasekhar, who won a Nobel Prize for his work on dwarf stars and was one of the world’s foremost authorities on stellar structure and astrophysical hydrodynamics.

But this is no ordinary floor.

It is 73 feet in diameter, considered the world’s largest indoor elevator and can rise 26 feet. It would make for a fantastic dance floor, but the 37.5-ton platform’s sole purpose at Yerkes Observatory in Williams Bay is to provide convenient access to the world’s largest refracting telescope.

A $20 million effort by a local nonprofit is trying to make sure the elevating floor, the 40-inch telescope and the rest of the historic facility remain viable for another century after it was gifted last month to the Yerkes Future Foundation by the University of Chicago, which no longer had a need for the facility.

The foundation wants to bring back tours and programs by spring 2021 and there are plans to expand its research capabilities, improve the technology and provide a unique space for public and private events. Much of the funding will be used to restore the 60,000-square-foot building and its three main domes, each with its own telescope.

“It’s in great shape for being 123 years old,” said Ed Struble, who has been the director of building and grounds at Yerkes for nearly 30 years and is continuing that role with the foundation. “There’s a lot of work we’re going to do to it, but I look at it as being in great shape. I’m really impressed with the attitude of the people taking over because we’re just going to tighten up everything.”

Members of the foundation bring years of experience in business, finance, fundraising and conservation efforts. Only it’s not just a local effort. The foundation’s plan is getting worldwide attention, which could help bolster funding for the restoration project, operational costs, the establishment of an endowment and the hiring of staff, including the current search for an executive director.

Assistance has come from John Briggs in New Mexico, the former president of the Antique Telescope Society and an expert in telescope and observatory preservation. Officials from the Adler Planetarium in Chicago and Lowell Observatory in Flagstaff, Arizona, are on board, while scientists, astronomers, astrophysicists and historians throughout the world have contacted the foundation over the past 18 months with encouragement and support.

In April, Dianna Colman, chairwoman of the foundation and who has extensive fundraising experience, was invited to speak about Yerkes to the Northeast Astronomy Forum, the world’s largest astronomy and space expo.

“If all this was going to be was a dusty museum, it wouldn’t be worth it,” Colman said during a tour of the observatory last week. “It has to be revitalized. It has to become a vibrant institution again.”

In the 1890s, Chicago millionaire Charles Tyson Yerkes Jr. provided about $400,000 in funding to construct the Great Refractor and build the observatory that bears his name. Yerkes built mass transportation systems in Chicago and London and was asked to fund the project by the president of the University of Chicago and George Ellery Hale, a young professor at the university who wanted to study the sun.

From 1897, when it opened, to 1908, Yerkes housed the largest operating telescope of any type in the world. The 64-foot-long steel telescope tube holds two 40-inch diameter lenses cast in Paris, ground and polished in Cambridge, Massachusetts, and together weigh about 500 pounds. The telescope, now equipped with 1960s and 1970s-era electronics and a glass-plate camera, is constructed of steel and rests on a pedestal of concrete, brick and steel secured 40 feet into the ground. All told, the telescope and support structure weighs an estimated 82 tons.

It’s all housed in a dome that’s 90 feet across with a slit to provide views of the universe from a hill on the northwestern shore of Geneva Lake in Walworth County. The University of Chicago in March 2018 announced it no longer had a need for the observatory and in June of that year, 300 people attended a community meeting in Williams Bay before the facility was closed four months later. The transfer to the foundation was made on May 1 of this year.

Tom Nichols, a member of the foundation’s board, an investment manager and a conservationist who sits on the Geneva Lake Conservancy board, said that the observatory has been primarily a self-contained entity for the University of Chicago but can now be used by a wide range of universities, colleges and independent researchers and provide more access to the public.

“We’re getting a lot of knocks on the door,” Nichols said. “For the past 123 years, that has never been the case.”

The property includes a glass plate library with thousands of images of stars, planets and distant solar systems. There’s a full machine shop, two homes that will be renovated for visiting scholars and researchers and, besides the 90-foot dome that holds the Great Refractor, five other smaller domes with telescopes. The facility also includes labs where cameras and telescopes were developed for an airborne observatory in a Boeing 747. The halls of Yerkes are lined with historic photos that show images of researchers, astronauts and expeditions by Yerkes staff to the South Pole for observations at the Center for Astrophysical Research in Antarctica.

There are also plans for landscaping, a larger parking lot and the removal of invasive species that would open up the hillside and provide views of the lake.

Struble worked for Ramada Inn before transferring to Wisconsin, where he then took a job at Yerkes. He served as the chief of the Williams Bay volunteer fire department for 16 years and lived on the Yerkes grounds for 19 years before moving to nearby Elkhorn. Struble knows every inch of the 48-acre property, which, despite its age, remains relevant and appears to have decades ahead of it.

“Any astronomy buff would think that this is the Holy Grail of astronomy,” Struble said as he stood on the steps of the main entrance. “Those are the kind of people from around the world that have made trips to come here.”

After recently receiving ownership of the Yerkes Observatory from the University of Chicago, the Yerkes Forward Foundation is moving ahead wit…

The decision to close the two mills is driven by "the accelerated decline in graphic paper demand resulting from the COVID-19 pandemic," the company said.

The event typically draws more than 60,000 people from around the world and has a more than $45 million economic impact to the Madison area.

David Gates has chronicled 35 pieces of artwork created in the late 1930s and early 1940s as part of the New Deal.

The Experimental Aircraft Association's 68th annual convention and fly-in that draws about 600,000 people is canceled this year due to the COVID-19 pandemic. 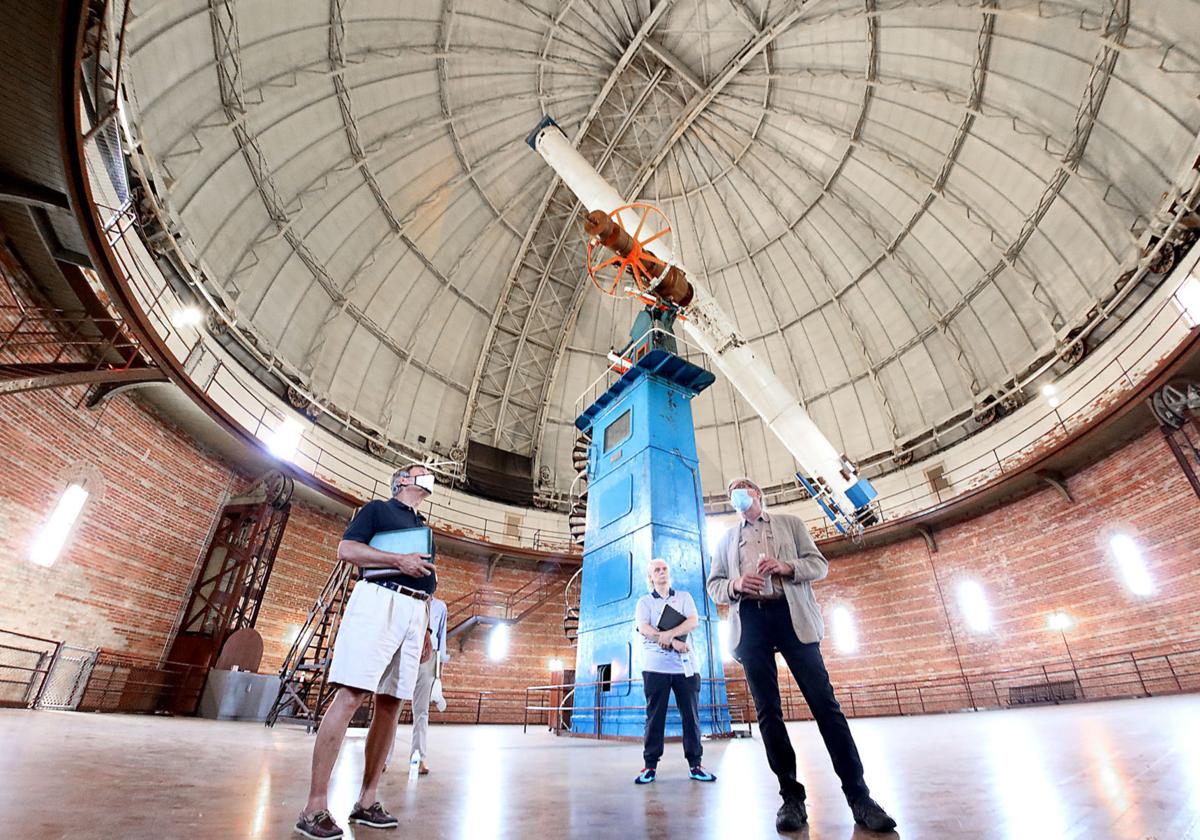 Centered inside a 90-foot diameter dome, the 1890s-era refracting telescope at Yerkes Observatory in Williams Bay towers over visitors. The University of Chicago last month transferred ownership of the 123-year-old facility to the Yerkes Future Foundation, a preservation group that plans to restore, refurbish and reopen the historic research center. 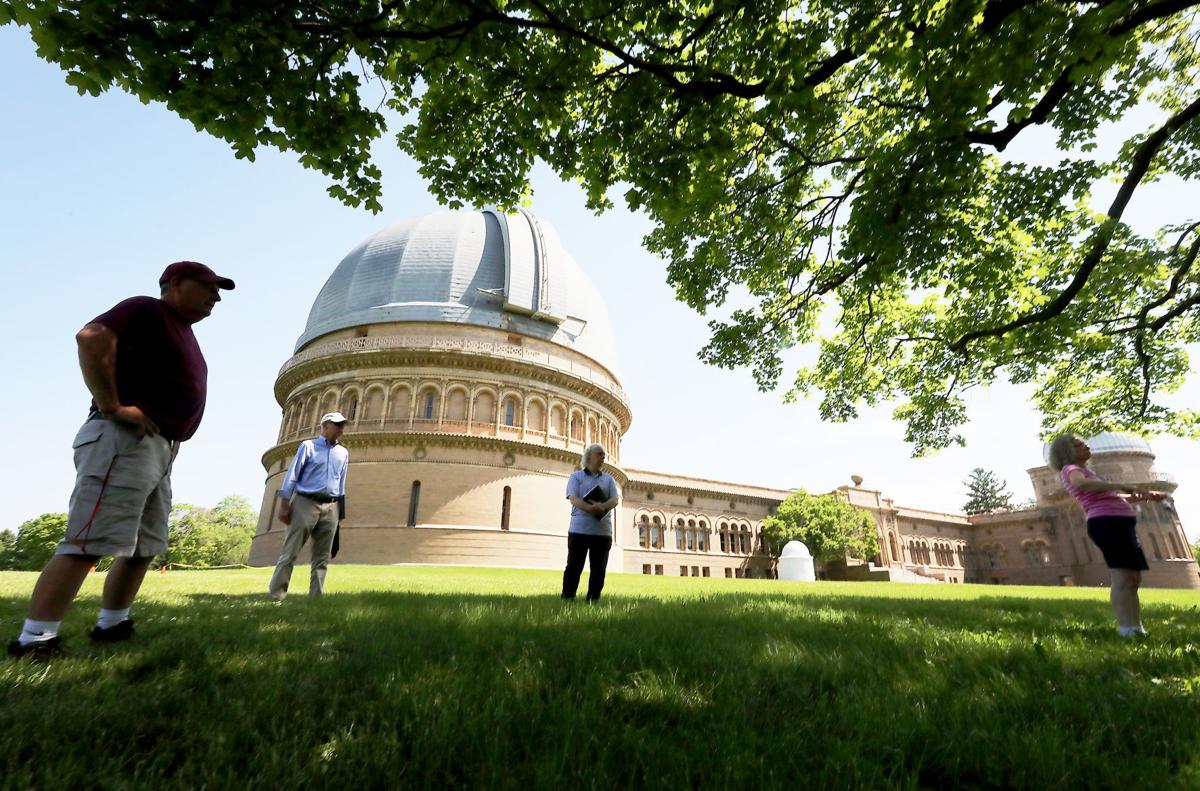 Members of the Yerkes Future Foundation find shade under a large maple tree on a portion of the 48-acre John Olmsted-designed grounds of the Yerkes Observatory in Williams Bay. The 60,000-square-foot facility, home to three domes each with its own telescope, was constructed between 1894 and 1897. 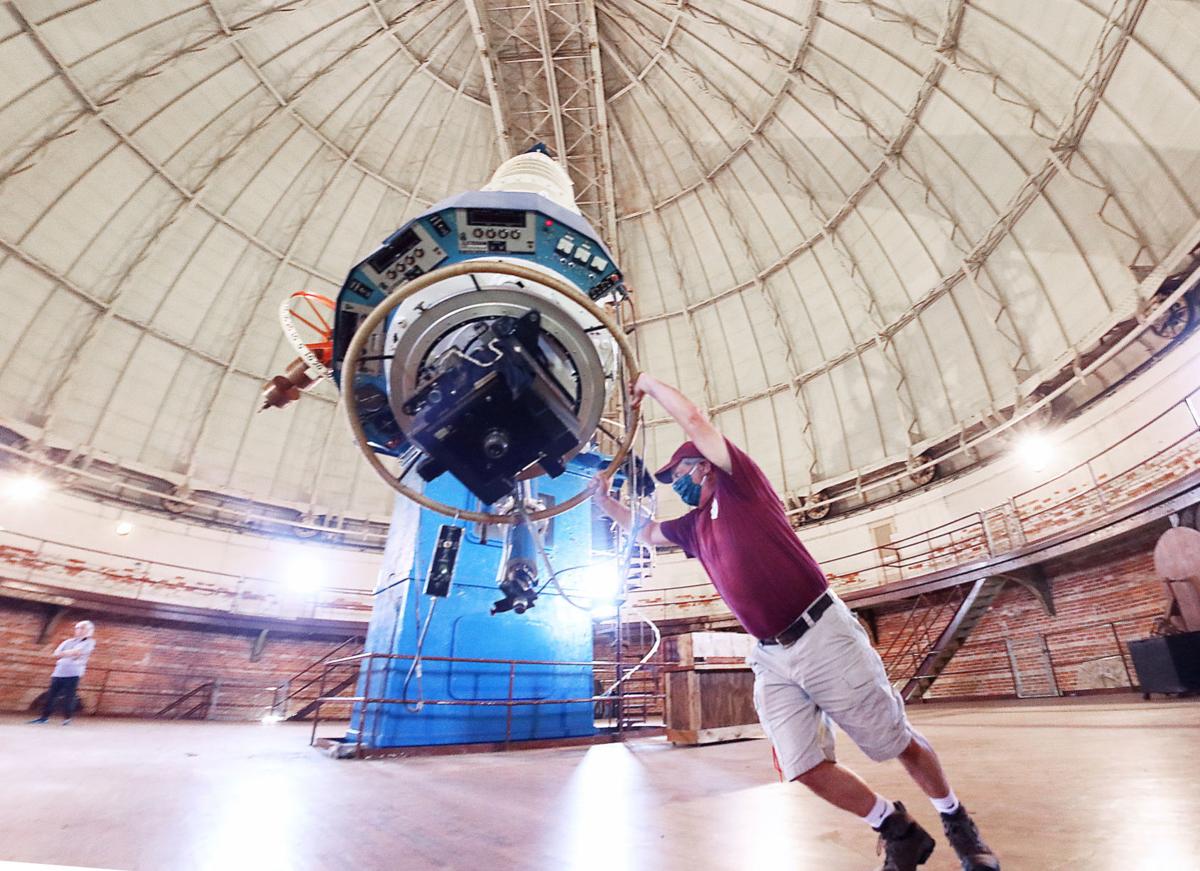 Built in the 1890s, the world's largest refracting telescope is maneuvered by hand by Ed Struble, who has served for nearly 30 years as director of building and grounds at the Yerkes Observatory in Williams Bay. The floor can also be raised and lowered to bring people closer to the eye piece. 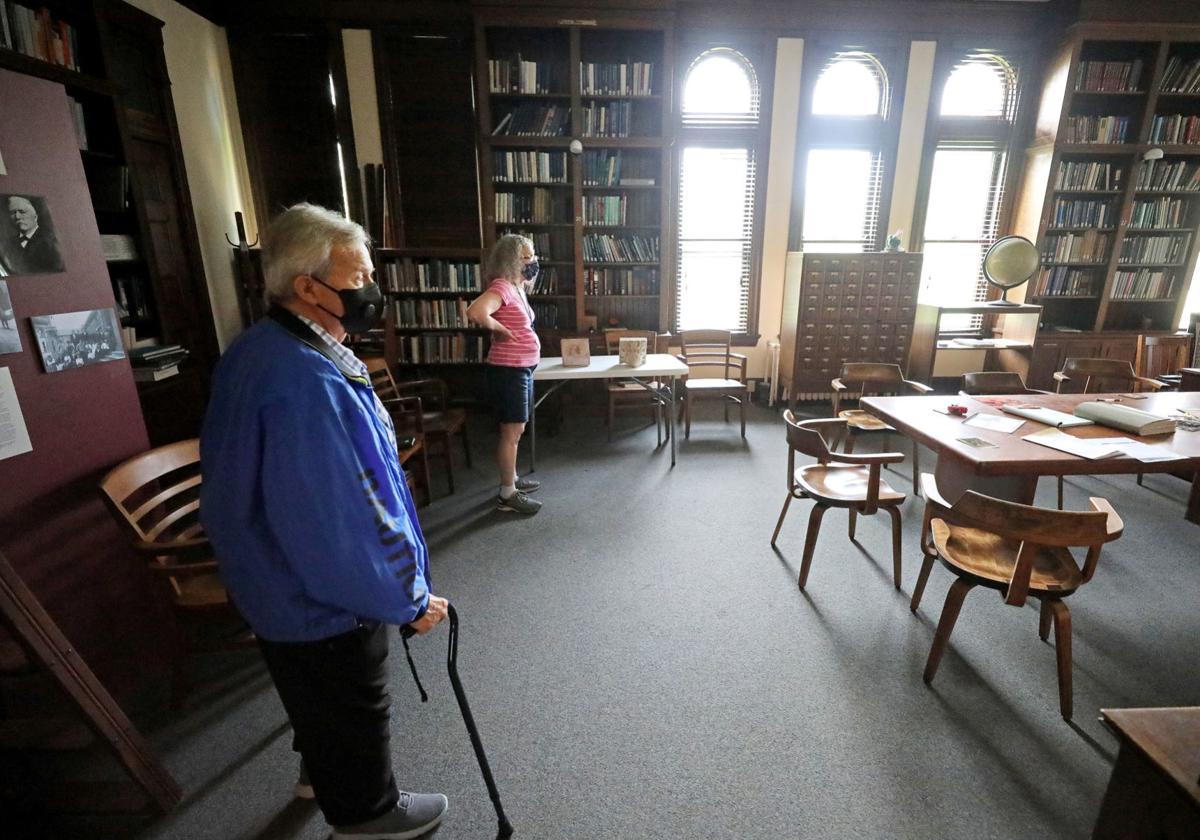 Yerkes Future Foundation committee members Chuck Ebeling and Dianna Colman look over the library of the Yerkes Observatory in Williams Bay. The facility is also home to laboratories, a machine shop and a vault that holds thousands of glass-plate images of stars, planets and distant solar systems. 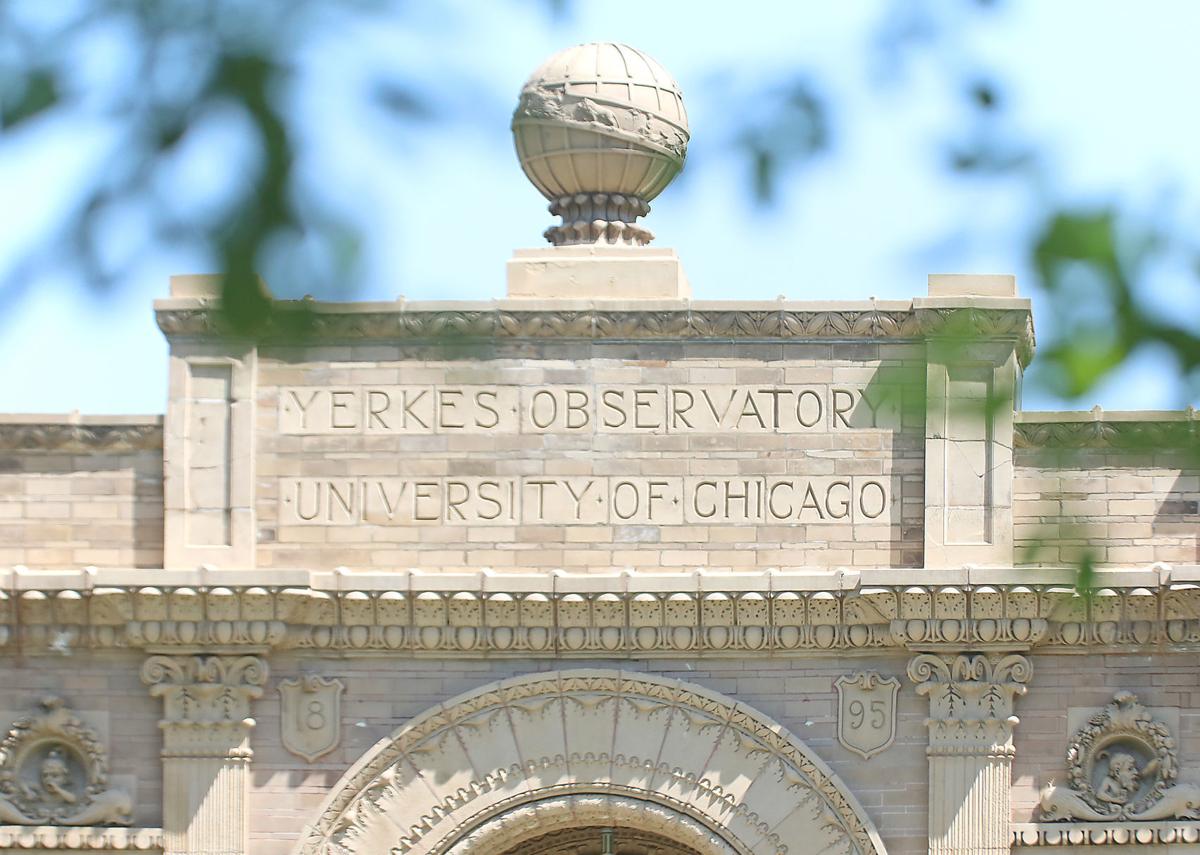 In operation since 1897, ownership of the Yerkes Observatory in Williams Bay was transferred last month from the University of Chicago to the Yerkes Future Foundation, which has plans to raise $20 million for its renovation and operations. 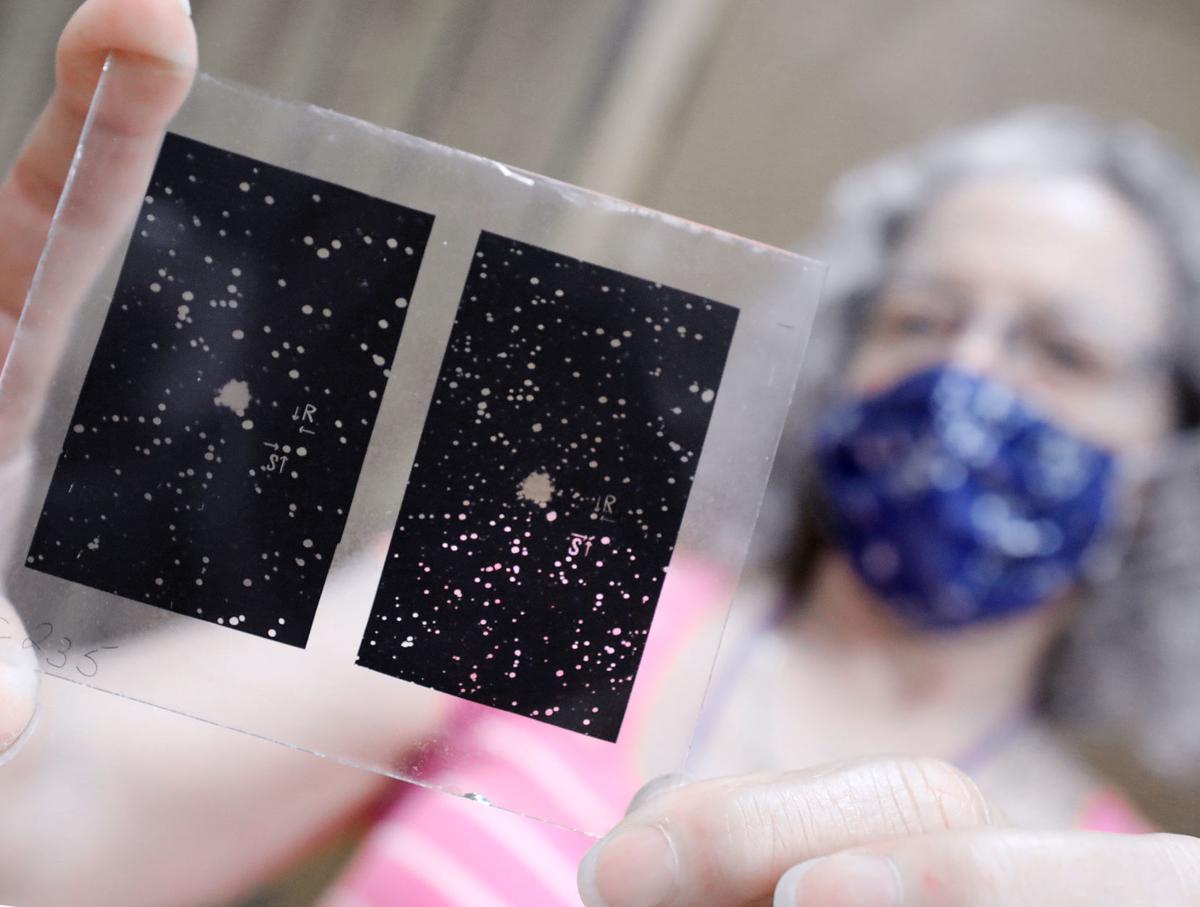 One of tens of thousands of glass photograph plates captured by the 40-inch refracting telescope at the Yerkes Observatory in Williams Bay is held by Dianna Colman, chairwoman of the Yerkes Future Foundation. 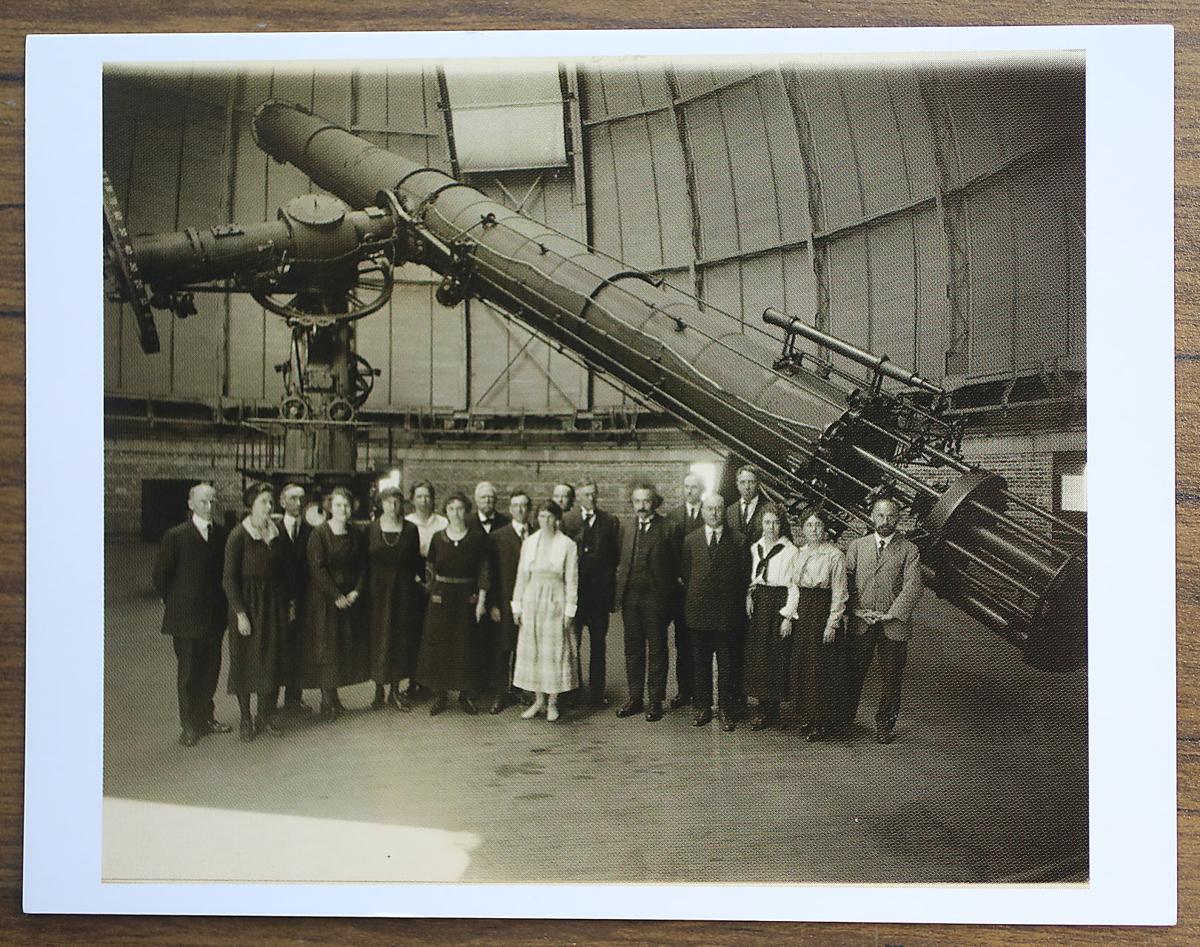 Famed mathematician Albert Einstein, seventh from left, appears in a 1921 photo with staff at the Yerkes Observatory in Williams Bay. The facility has hosted scores of influential and groundbreaking researchers over its 123 years.