There’s something magical happening in Middleton.

In the basement of a local home are shelves meticulously organized with stacks of sweaters sorted by color. The sweaters were deemed unusable by St. Vincent de Paul and sent to a group of crafty volunteers who transform the well-loved wool into mittens ready to take on a winter in Wisconsin.

Their crafty cause? ReMitts — an organization of roughly 25 volunteers who give new life to old sweaters before making them available to the public in exchange for a donation to a local food pantry.

Since 2009, ReMitts has been raising money for area food pantries.

When asked about why they chose food pantries specifically, ReMitts founder Janet Tupy said pantries are a cause that everyone can rally around.

In their first year, the folks behind ReMitts hoped to raise $1,000. They were blown away when they raised nearly $4,000.

“That’s when we realized there was a demand for these products,” Tupy said.

So far they’ve garnered more than $225,000. This holiday season, the time when ReMitts are available at local retailers, they hope to surpass a quarter of a million dollars.

That’s not an outrageous goal as Tupy said last year they received more than $50,000 in donations.

Mittens are not “sold” by ReMitts, they are given in exchange for a $35-$45 donation to a pantry of the donor’s choosing. Checks, for example, are made out directly to a food pantry.

“It’s wonderful,” said Amy Lord, development director for The River Food Pantry. “For Janet and the group of ladies who thought of doing this, it’s a really unique way to support everybody. We’re just lucky we’re one of the beneficiaries.”

Last year, The River received more than $10,500 in donations because of ReMitts.

For perspective, The River’s monthly food budget is $16,500.

Volunteers for ReMitts made 1,600 pairs of mittens last year. They sold 1,400 and it was the first time they had a large surplus.

“Every year our goal is to sell what we make,” Tupy said. “We try not to stress ourselves with having a goal or committing to a certain number.”

The Tuesday ReMitts team is like a group of old friends joking around and just having a good time.

Workdays vary for the group. Sometimes the 9 a.m. to 3 p.m. period is spent just cutting the fabric, while other days they divide into groups where some will cut patterns or sort/assign decorative buttons or sit at machines sewing.

The ReMitts team is a dedicated bunch, even though there isn’t a set requirement for volunteering.

No one is committed to anything, so they can come and go as their schedules allow, Tupy said.

There are also a handful of “phantom sewers,” people she may never have even met, who contribute to the cause from the comfort of their homes. Even volunteers’ husbands chip in by taking the wool sweaters to laundromats and washing them in hot water to shrink and felt them.

Volunteering for the organization also has no age limit. The oldest volunteer is 90; the youngest are grandchildren of volunteers.

ReMitts is limited only by how many mittens the volunteers can make, Tupy said.

Making the mittens is also a relatively easy task for the crew and it gives them the freedom to be creative. The result is a multitude of mittens, each a one-of-a-kind creation.

“I love, love, love when we get a sweater that’s full of holes or shrunk so much that it can’t be used,” Tupy said. “We take that and make it into these mittens … we’re taking something old and giving it new life.”

Not only is it an opportunity to be creative and have fun, but it provides local food pantries with crucial support.

Lord said there isn’t a time of year that The River is “most needed” since the need is constant — although, the holiday season tends to bring more awareness to food pantries.

She is also grateful that ReMitts allows donations to be directed to the pantry of a consumer’s choosing. Sometimes donations go to The River, or one of the other large pantries, or they go to a smaller community pantry.

Spreading the wealth and “filling the gaps” in pantry support is great since there are so many avenues to fulfill the needs of the community, Lord added.

By suggesting a few local pantries to donate to, ReMitts gives consumers options. However, suggesting a national name like St. Vincent de Paul, even visitors to the city could be familiar with that organization.

As the years go on, the folks behind ReMitts continue to be amazed by the dedication of the community around their mittens.

Tupy said the ReMitts retail partners are doing “wonderful” things for the organization by allowing them to bring in their wares every holiday season.

With nearly 30 retail spots throughout the area, the mittens sell so well that volunteers have to “shut down” locations one by one and consolidate the remaining inventory as January approaches. Mittens are usually pulled from the stores around the new year.

“When they’re advocates, things move so much better,” she said. “(The staff) takes ownership of it — they enjoy it.”

ReMitts retail locations can be found on their brand new website remitts.org.

Beth Amos has been writing novels for more than 20 years, but she doesn't make a habit of telling everyone about her other job while working as a nurse.

University Theatre's production of "Is He Dead?" opens Thursday and runs through Dec. 10. The play, penned by Mark Twain in 1898, was adapted by playwright David Ives.

On behalf of the volunteers at ReMitts, I would like to thank the State Journal for telling our ReMitts story on the front page of the Thanksg…

Change has been planned and unplanned for Middleton Outreach Ministry. 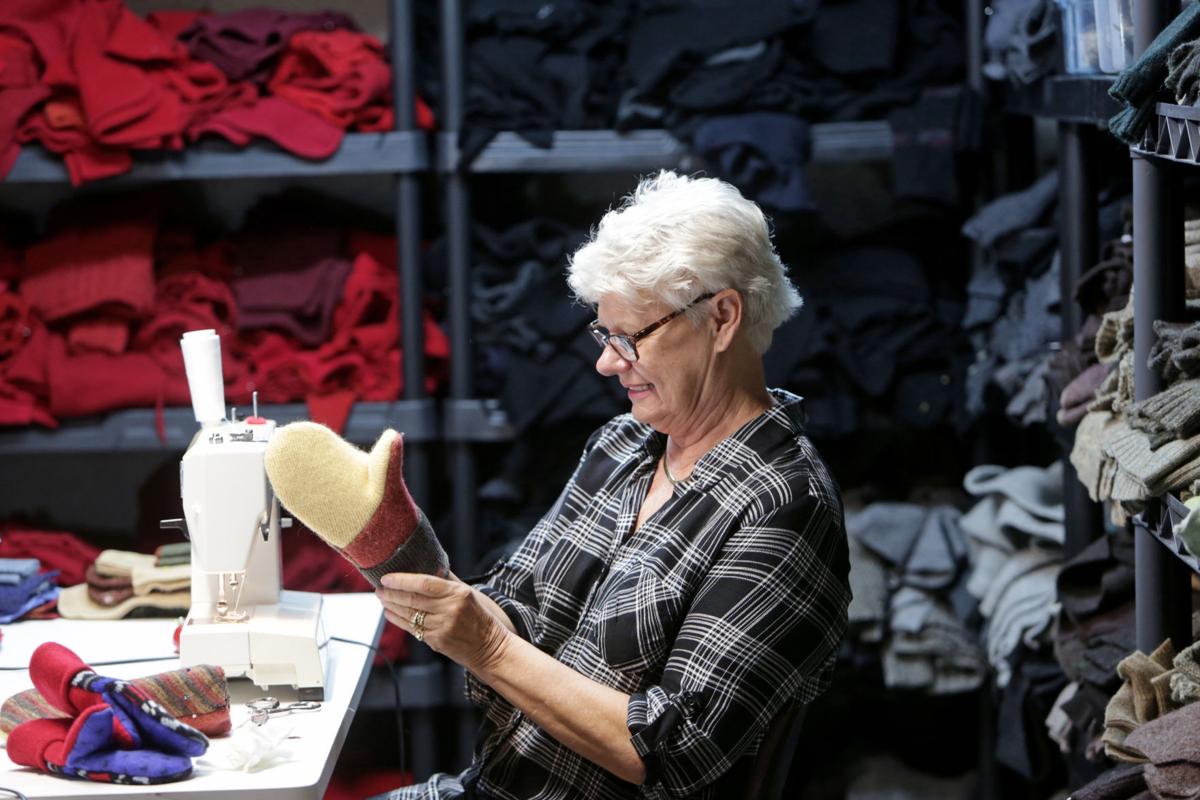 Susanne Porter is one of the roughly 25 volunteers for ReMitts. The organization takes discarded wool sweaters and turns them into warm mittens which people can receive in exchange for a donation of $35-$45 to a food pantry of their choosing. 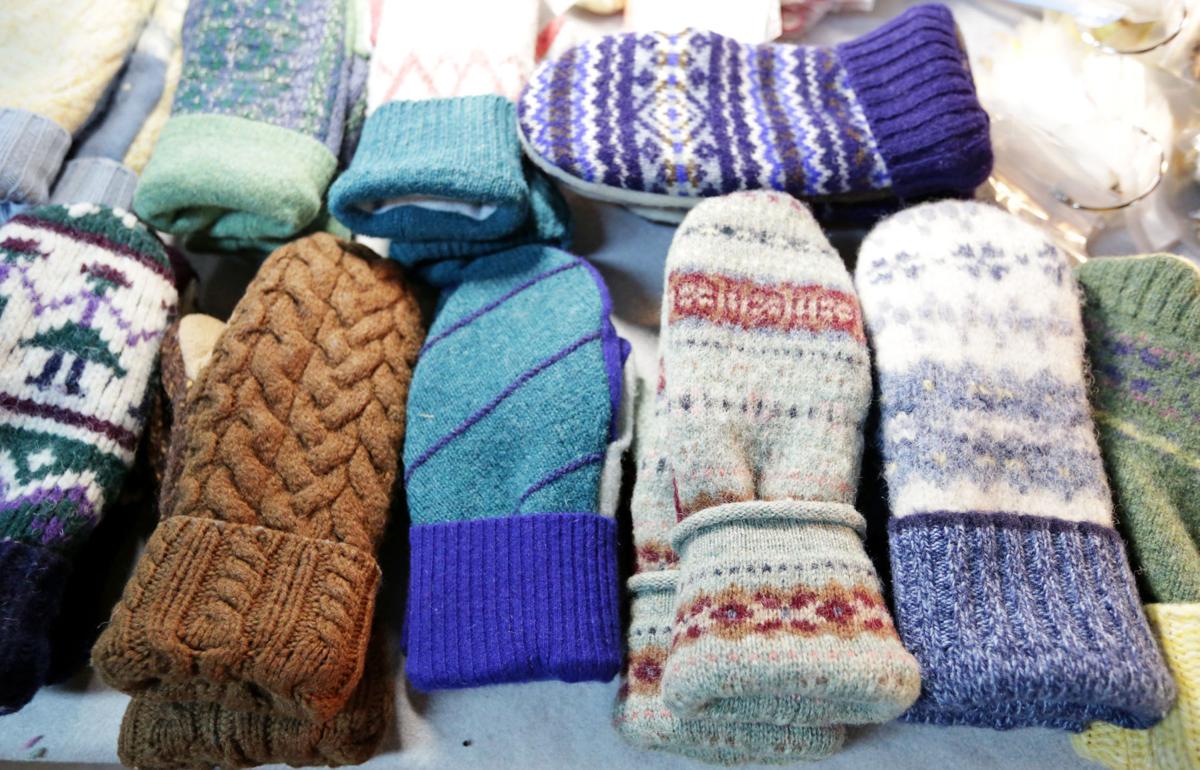 Making the mittens at ReMitts is something a volunteer with any level of skill can do, according to organization founder Janet Tupy. Before starting the group Tupy hadn't sewn since high school while other volunteers have varying experience - one volunteer is even a professional seamstress. 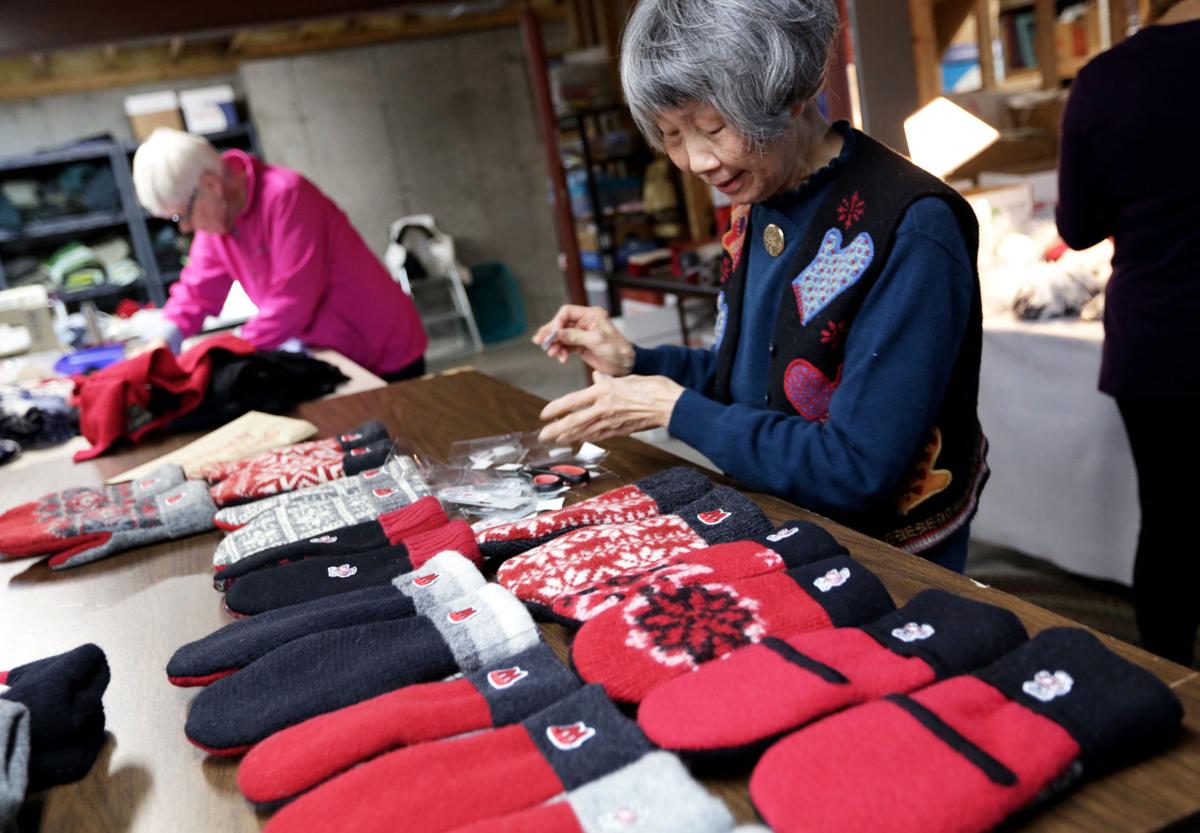 Kit-Yin Ling enjoys volunteering for ReMitts and said the other volunteers really enjoy one another. It's also great to see merchants who understand "the idea of community service" and allow ReMitts to showcase their wares during the holiday season. 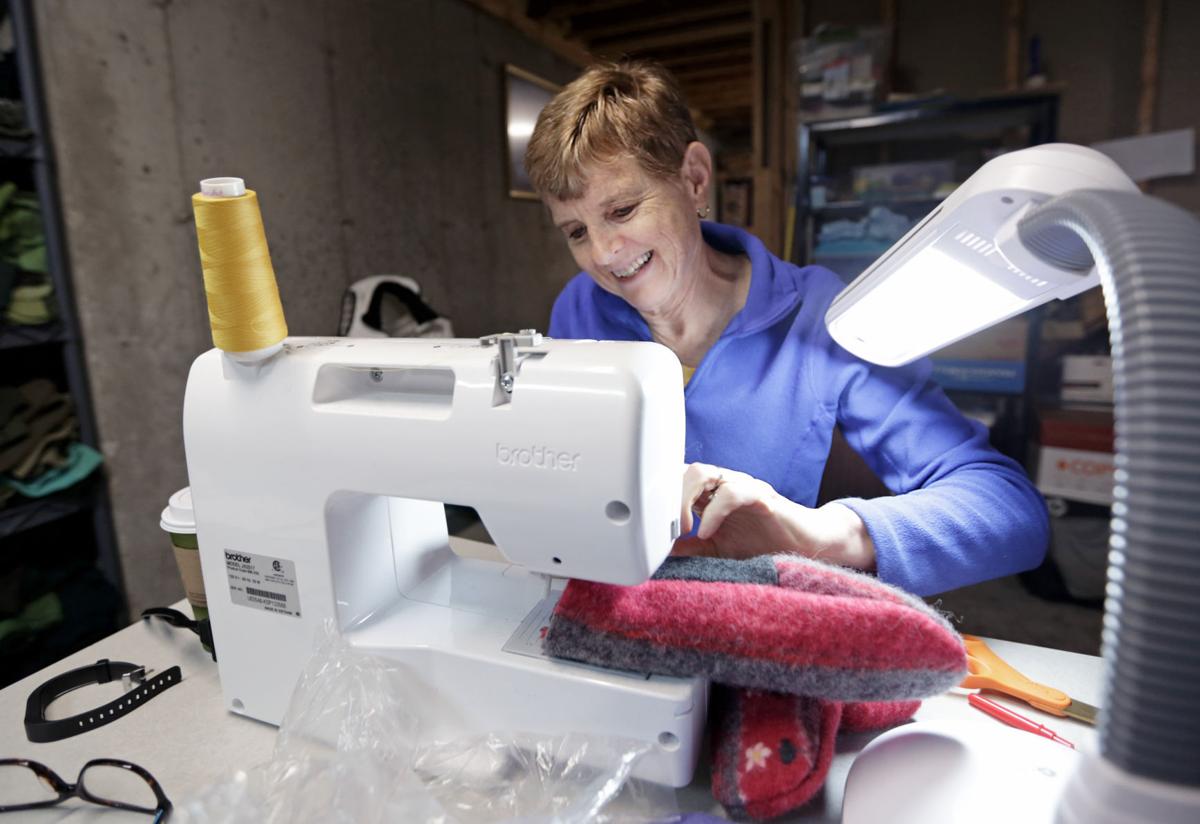 Janet Tupy, founder of ReMitts, said there is a level of "instant gratification" making the mittens. It isn't as time consuming "as something like knitting a sweater which can take months or even years," she added. 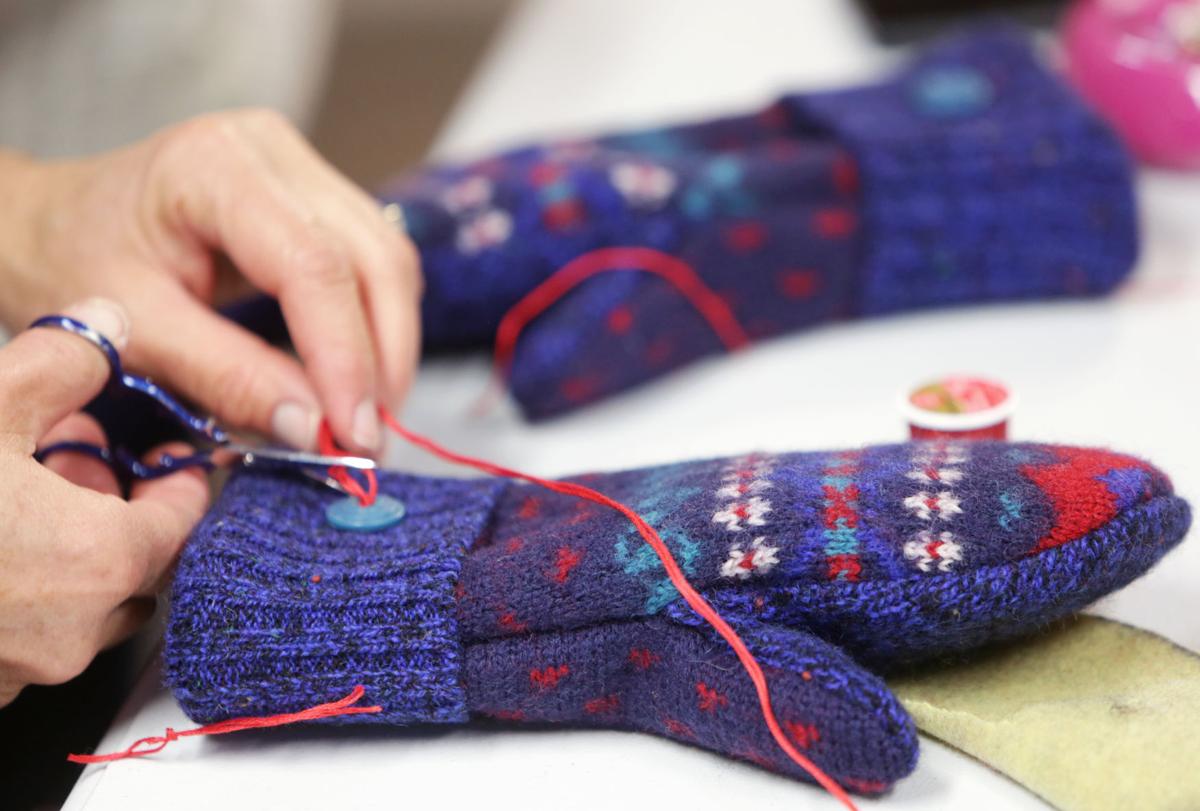 Betsy Nordstrom, of Middleton, sews a button on a mitten during a weekly gathering of ReMitts volunteers. With the exception of university appliques, virtually everything is donated to the organization from the sweaters to the buttons and thread, according to founder Janet Tupy.