One Confederate monument is gone and another is slated to be taken down at Forest Hill Cemetery after Madison Mayor Paul Soglin ordered their removal.

Soglin said in a statement Thursday that he directed city staff to remove a plaque and a larger stone monument at the Confederate Rest section of the public cemetery, saying, “There should be no place in our country for bigotry, hatred or violence against those who seek to unite our communities and our country.”

The decision aligns with similar ones throughout the United States to remove statues and monuments dedicated to the Confederacy after a violent protest Saturday involving neo-Nazis and white supremacists in Charlottesville, Virginia, left one person dead and several others injured.

Soglin said the violence in Charlottesville “prompted us to revisit the matter and to make this decision.”

A memorial plaque at the Confederate Rest section of the Near West Side cemetery was removed Wednesday afternoon.

It described the 140 people buried there as “valiant Confederate soldiers” and “unsung heroes.” The privately funded plaque, which rested on a granite structure, said the soldiers were buried in the Union state after surrendering in a battle and dying at Camp Randall as prisoners of war.

“Taking down monuments will not erase our shared history. The Confederacy’s legacy will be with us, whether we memorialize it in marble or not,” Soglin said. “We are acknowledging there is a difference between remembrance of history and reverence of it.”

A larger stone monument naming the deceased still stands, but is planned to be taken down.

Eric Knepp, who heads the Parks Division, which operates and maintains Forest Hill Cemetery, said city officials are working on the logistics of removing the second monument. It’ll involve heavy machinery, such as a crane, Knepp said.

Soglin said an “appropriate monument or plaque with the names of the deceased” would be installed, but added that it won’t give “reverence for the Confederate insurrection and treason against the United States.”

William Huggins, who financed the plaque with his wife, Evelyn, wrote an essay in the Wisconsin State Journal in 1981 that says the larger monument was erected in 1930 by the United Daughters of the Confederacy.

Huggins wrote in the essay, published just before the plaque was revealed, that “the spirit of the men beneath (the headstones) still remains upright and undaunted,” and continued by saying the memorial was meant to inform visitors about why the Confederate Rest exists.

Stephen Kantrowitz, a history professor at UW-Madison who specializes in the Civil War era, said he believes a replacement marker is appropriate to explain the historical context of the Confederate soldiers’ burials. But he takes issue with how the plaque “celebrates their actions as heroic.”

“It’s a story worth telling, but it’s not a history worth celebrating,” Kantrowitz said.

But the mayor brushed aside any idea of replacing the plaque. He said the complexities of the Civil War and how people came to join the Confederate Army may have factored into why the soldiers ultimately died in Wisconsin.

“I don’t know how, without a good five chapters, how we could tell that story,” Soglin said. “That’s the problem when people try to simplify history down to a couple paragraphs.”

On the same day Soglin announced the monuments’ removals, President Donald Trump tweeted: “Sad to see the history and culture of our great country being ripped apart with the removal of our beautiful statues and monuments.”

Earlier this week, Baltimore’s mayor sped up plans to take down four Confederate monuments throughout the city. A decision to take down a statue of Confederate Gen. Robert E. Lee prompted the rally in Charlottesville.

Kantrowitz said he has seen a “sea change” of public attitudes and perceptions toward Confederate monuments and statues after Dylann Roof, who expressed white supremacist beliefs, murdered nine people at a historically black church in South Carolina in 2015.

“Charlottesville and the sustained attention to it, both to the deaths there and the way the president has responded to it, has clarified for a lot of people that we have some sort of civic housekeeping to do,” Kantrowitz said. “Monuments that were celebrated or tolerated have moved into the realm of unworthy and even intolerable.”

Knepp, the parks superintendent, said the Parks Division has received complaints this week about the Confederate monuments following the violence in Charlottesville.

For years, people were allowed to display Confederate flags in that section of Forest Hill Cemetery.

The Confederacy’s “Stars and Bars” would hang on a flag pole at the burial site only on Memorial Day, but the pole was removed last September.

Volunteers had also placed small Confederate battle flags at each headstone for the holiday. A change to cemetery rules in May, however, only allows the flags of the United States, Wisconsin, Madison, branches of the U.S. Armed Forces and United Nations members to be displayed.

This essay by William Huggins appeared in the Wisconsin State Journal on May 24, 1981, and describes Huggins' effort to research the events th…

What do you think of Mayor Paul Soglin ordering removal of Confederate monuments at Forest Hill Cemetery?

Scott Walker: Donald Trump can speak for himself

"Would I occasionally like the president to do or say things slightly different than he does? Of course" Walker said.

Soglin, who last week ordered the removal of a 1981 plaque at the Confederate rest section of Forest Hill Cemetery, at a press conference Monday outlined three options for a larger stone monument placed at the West Side cemetery in 1931.

Despite being the mayor of Madison for decades, Paul Soglin is just now calling for the removal of Confederate monuments in Forest Hill Cemete…

The mayor’s decision to remove the granite monument listing the names of the Confederate soldiers interred in Forest Hill Cemetery is appalling.

Chris Rickert: Put Confederate monuments — and their removal — in context

It's not possible to have an appropriate remembrance of the Confederacy that doesn't put the evils of slavery front and center.

"It's politically expedient to ignore their involvement if you're considering seeking the Democratic Party's nomination for governor."

Graffiti including swastikas was sprayed on a monument with red paint next to the Gates of Heaven Synagogue building at James Madison Park Wednesday morning.

Dozens showed up Tuesday to voice their opinions on the two monuments, and the three options Mayor Paul Soglin has offered for their future. 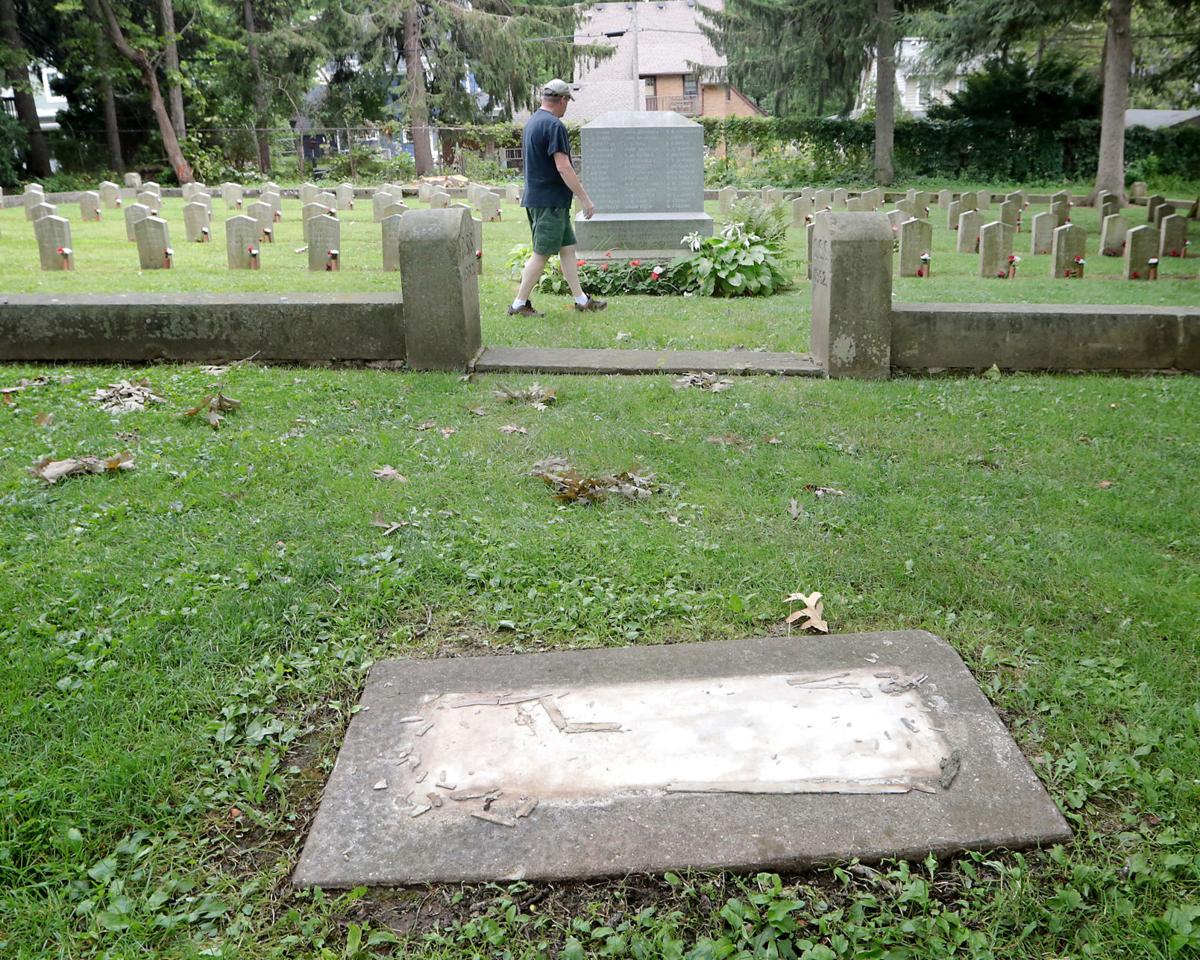 A concrete slab remains where a stone and plaque memorializing the resting place of Confederate soldiers of the Civil War was removed from the Confederate Rest section of Forest Hill Cemetery on Wednesday. 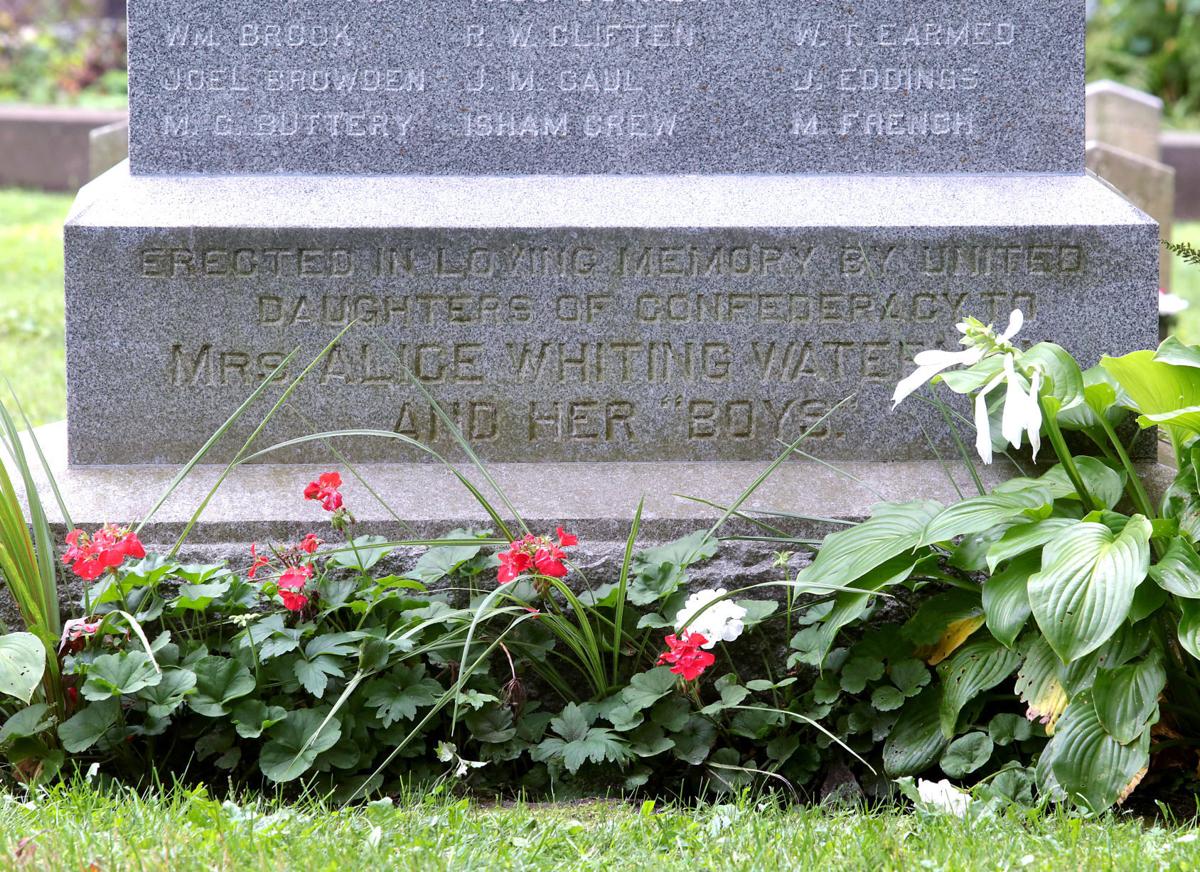 A larger, stone monument naming the deceased Confederate soldiers is slated to be removed from Forest Hill Cemetery, but the logistics are still being figured out. 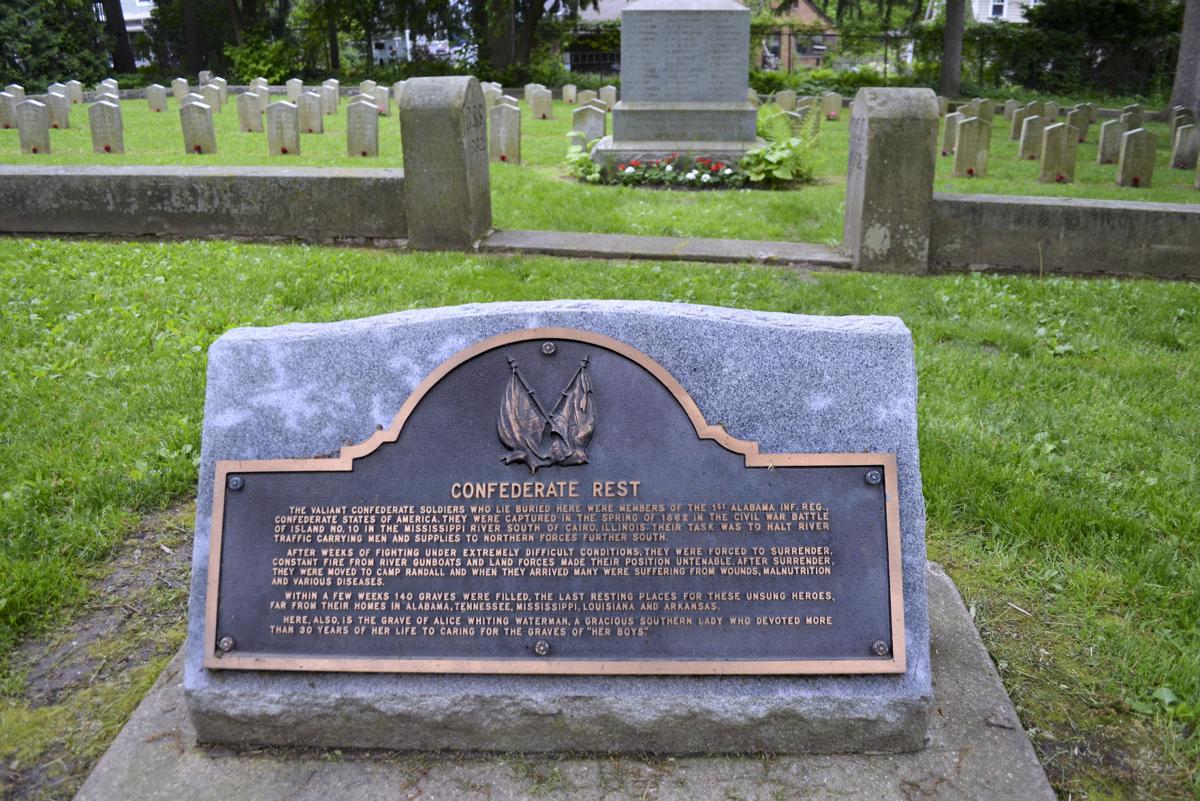 The 1981 memorial to the Confederate soldiers buried at Forest Hill Cemetery was removed Wednesday.