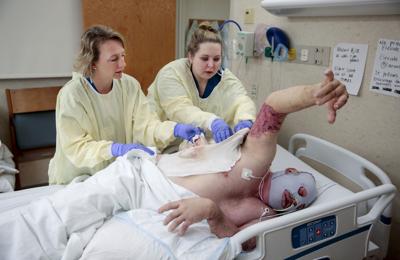 Five months after finishing nursing school, Angela Gibson reported to UW Hospital’s burn unit for a night shift that would change her life.

That afternoon — April 19, 1998 — a mentally ill man poured gasoline on an engaged couple aboard a Madison Metro bus and lit a match, severely burning the couple and seriously burning himself and three others.

Gibson, then 22, was assigned to care for the man, Salim Amara, found to have paranoid schizophrenia. Later, she became the primary nurse for the couple — Eric Nelson, then 29, burned on 97 percent of his body, and Heather Gallagher, then 24, burned on 87 percent of hers.

Through weeks of overtime, the delivery of excruciating but necessary wound treatments, months-long stays for most of the victims, Nelson’s near death and an emotional connection with Gallagher, Gibson discovered she thrived on the tension.

When the activity faded, she found stimulation in a different way: She got an M.D.-Ph.D. In 2015, after 14 years of additional school and training — during which she had two children — she became a burn surgeon and researcher at UW.

Now, 20 years after the inexplicable bus fire led Madisonians to raise more than $100,000 for the victims and cheer Nelson’s and Gallagher’s wedding the next year, Gibson is getting her adrenaline rushes from skin graft surgeries and satisfying her intellectual curiosity with lab studies seeking better ways to repair burned skin.

“When everything settled down, I realized I still yearned for that continual high intensity,” Gibson said.

A major burn “is the most stressful thing your body can go through,” she said. “All of your organ systems are involved. Your largest organ, your skin, is completely visible, and you can watch it heal.”

Cindy Schmitz, a nurse practitioner on the burn unit, was nurse manager at the time of the bus fire and hired Gibson for her nursing job.

As a doctor who worked as a nurse on the unit, Gibson “has a more global view of all of the pieces of care,” Schmitz said.

For the nurses, “she speaks their language; she’s walked in their shoes,” Schmitz said.

Why not med school?

Gibson, now 42, grew up in Waukesha. As an undergraduate at UW-Madison, she considered pre-med but decided on nursing.

Gibson had to care for Amara, then 20, a homeless man who later told a psychiatrist that voices he thought were coming from Nelson told him the devil was out to get him.

“I was the newest nurse, and he was the smallest burn,” with about 20 percent of his skin damaged, Gibson said. “It was one of those tests of your internal ethics — being able to shut down what you know happened and just take care of the patient.”

She spent months caring for Nelson and for Gallagher — who, like Gibson, was in her early 20s and engaged, reinforcing the idea that tragedy can strike anywhere and at any age.

By repeatedly cleaning the couple’s wounds and replacing their bandages, an intensely painful process that tests the nurse-patient relationship, Gibson got to know them well.

At one point, it appeared Nelson was going to die. Gibson and Schmitz brought Gallagher to his bedside to say goodbye.

But he rebounded. After nearly a year in the hospital, in December 1999, he married Gallagher on a cruise ship in Miami. Gibson was a bridesmaid.

She started talking about becoming a nurse practitioner or a physician assistant. When Dr. Michael Schurr, then co-director of the burn unit, overhead her, he said, “Why not just go to med school?”

Soon, she was volunteering in the lab of Lynn Allen-Hoffmann, a UW-Madison scientist who in 2000 founded Stratatech, a company that develops skin substitutes for burns and other wounds.

In 2001, Gibson embarked on an M.D.-Ph.D. at the university — four years of medical school and four years of graduate school, followed by six years of residency and fellowship training.

During graduate school, for which Allen-Hoffmann was her thesis adviser, Gibson and her husband had their children — Guyan, 14, and Sophia, 13, students in the Middleton Cross Plains School District.

She and others in the lab are looking to see if enough healthy cells remain in apparently dead tissue to allow surgeons to leave more of it on patients. If the right nutrients were added to spur the healthy cells to grow, some wounds might heal without the need for skin grafts from elsewhere on the body.

“I think we often remove too much (tissue), just to be safe,” Gibson said. “If we could take less ... and let the wound heal in on its own, the patient wouldn’t have to have a whole other wound.”

Products that could encourage such healing might include StrataGraft — a skin substitute from Stratatech, now part of the global company Mallinckrodt, in phase 3 clinical trials at UW and elsewhere — and even tilapia skin.

Last year, veterinarians placed the fish skin on the paws of black bears injured in wildfires in California, resulting in quick healing and discussion about other potential applications.

Gibson said caring for burn patients as a doctor and a nurse has helped her see that the invisible, emotional scars of trauma are often as much of a challenge as the physical ones.

“Burn survivors are always burn survivors,” she said. “They carry that trauma with them for their lifetime.”

Still, the resilience of patients like Nelson and Gallagher, who carry on despite continual pain and public stares, is inspirational, Gibson said.

“They go through this incredibly difficult time, and then they’re OK,” she said. “They get through it.”

As she looks back on the bus fire that sparked a turn in her career, and on her doubts about whether she could pull off an M.D.-Ph.D. while raising children, Gibson points to two key people who helped.

One is Dan Gibson, her husband, a financial planner. The other is Sharon Smith, her mother, who moved in with the couple when their children were young and still lives near them in Middleton.

Angela Gibson may not have attended every soccer game her children have played in, she said, but someone from the family is usually there. They have dinner together most nights.

It’s a milieu that has allowed her children to thrive, Gibson said.

“It’s about providing the right environment,” she said. “It’s kind of like a wound, right?”

Eric Nelson battles pancreatitis flare-ups once or twice a year, and Heather Gallagher broke her hand last month from a fall while walking the…

Deliverance from an inferno: Couple who survived horrific fire now focused on their future

There are days when the old anger, the anger that saved his life, returns to Eric Nelson, though its intensity has diminished with time.

MIAMI -- In a fitting tribute to the struggles they've been through, Eric Nelson and Heather Gallagher were married in about seven minutes on …

6 are badly burned in fire attack on bus; injured suspect, 20, arrested a mile from site

A man splashed and ignited a bucket of gasoline in a moving bus Sunday evening, sending four passengers and the bus driver fleeing the vehicle…

Whether it’s welcoming a new life, preparing for a life to end or dealing with the anguish or uncertainty of injury, surgery or disease, patients and families often turn to hospital chaplains for help with their mind, body and spirit.

The researchers are developing an online map, similar to a weather map, to track where E.coli, staph and other bacteria are most resistant to certain antibiotics. Currently, many doctors rely on paper tables that can be confusing to interpret.

The study results run counter to previous research on helmets and neck injuries.

Emergency room visits for suspected opioid overdoses increased 109 percent in Wisconsin from July 2016 to September 2017, the highest spike am…

By comparing test scores from nearly 60 years ago to health status today, including memory loss, researchers hope to identify factors that can help prevent Alzheimer’s.

The Madison company is part of Mallinckrodt Pharmaceuticals, a global company based in the U.K.

Stratatech, a Madison company developing regenerative tissue as an alternative to skin grafts in treating burns, has submitted a biologics lic…

The Food and Drug Administration has granted priority review to an application for StrataGraft, a regenerative tissue developed by a Madison c… 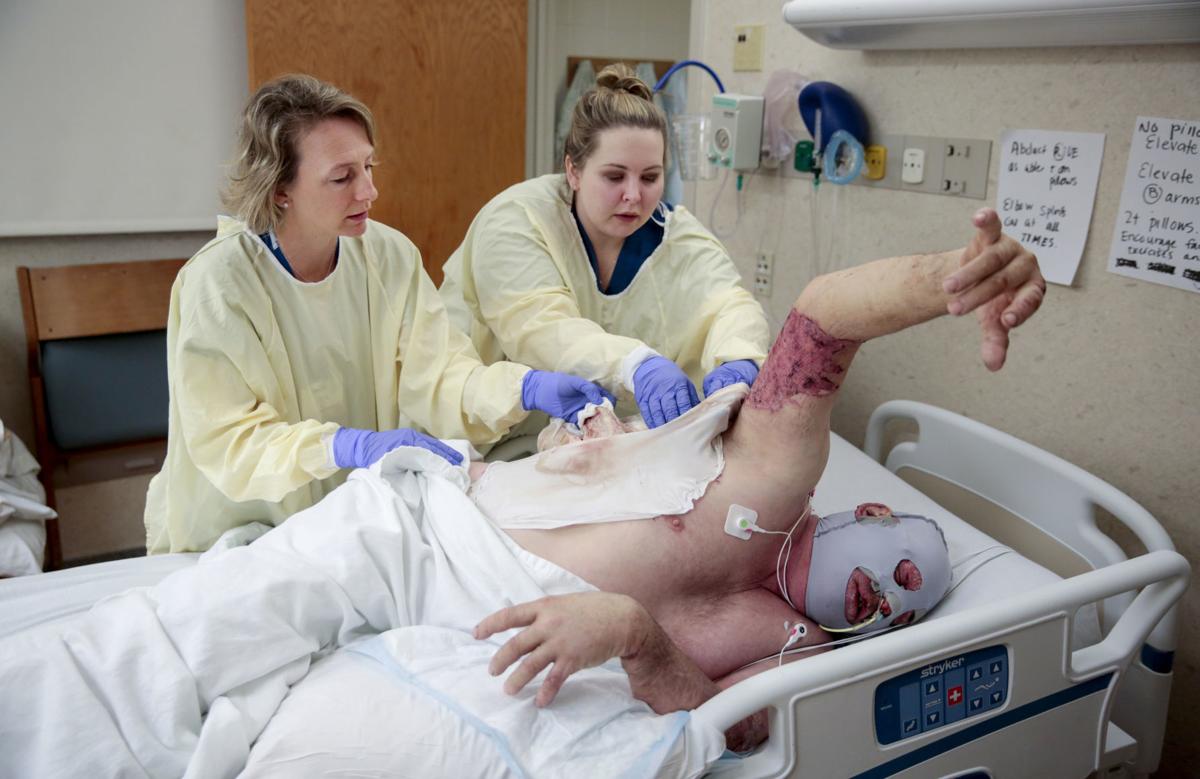 In UW Hospital's burn unit, Dr. Angela Gibson, left, and nurse Marie Clarke check skin grafts on Terry Krause, of Ripon, who was burned last month when a gas tank exploded on his wife's farm. Gibson was a new nurse on the unit on April 19, 1998, when a fire on a Madison Metro bus brought in six patients, including a couple burned on almost all of their bodies. The experience inspired Gibson to undergo 14 years of additional school and training to become a burn surgeon and researcher. 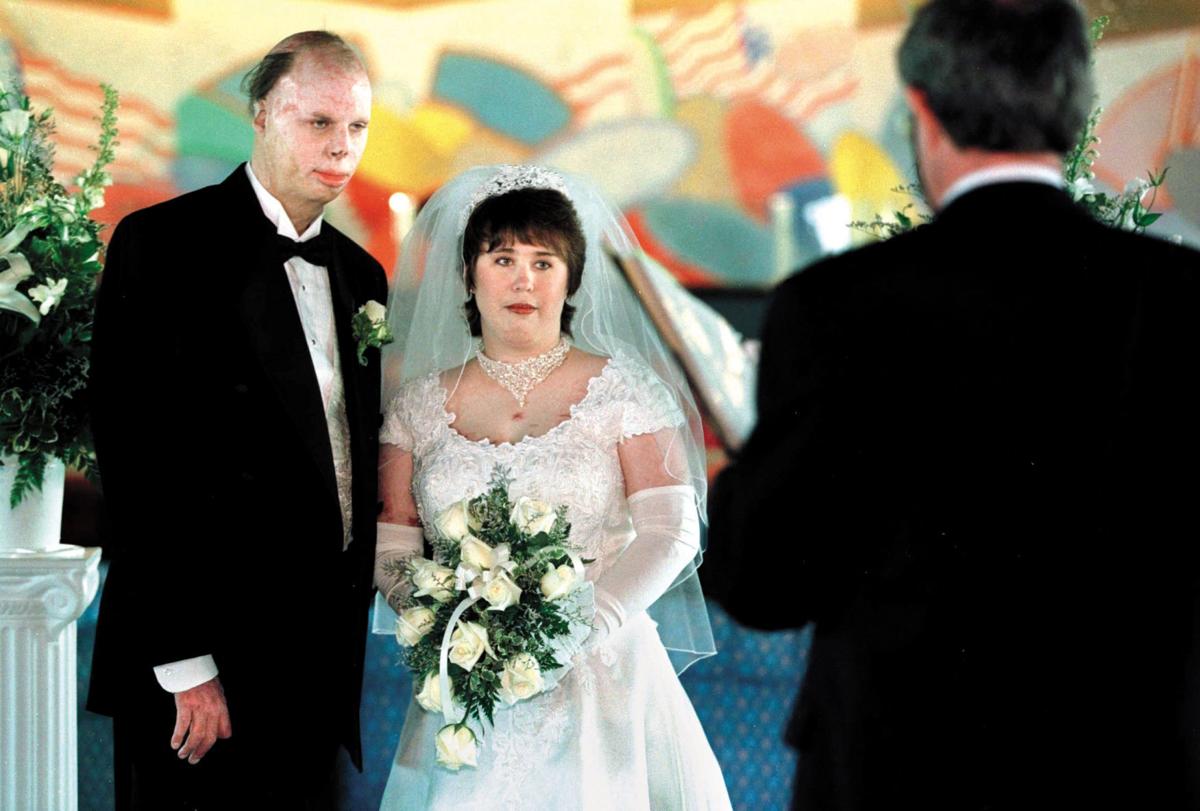 Eric Nelson and Heather Gallagher are married aboard a cruise ship in Miami in December 1999. The most seriously injured of six people in a Madison Metro bus fire on April 19, 1998, they now live in Kansas City, Missouri with their son, Dylan, 13. 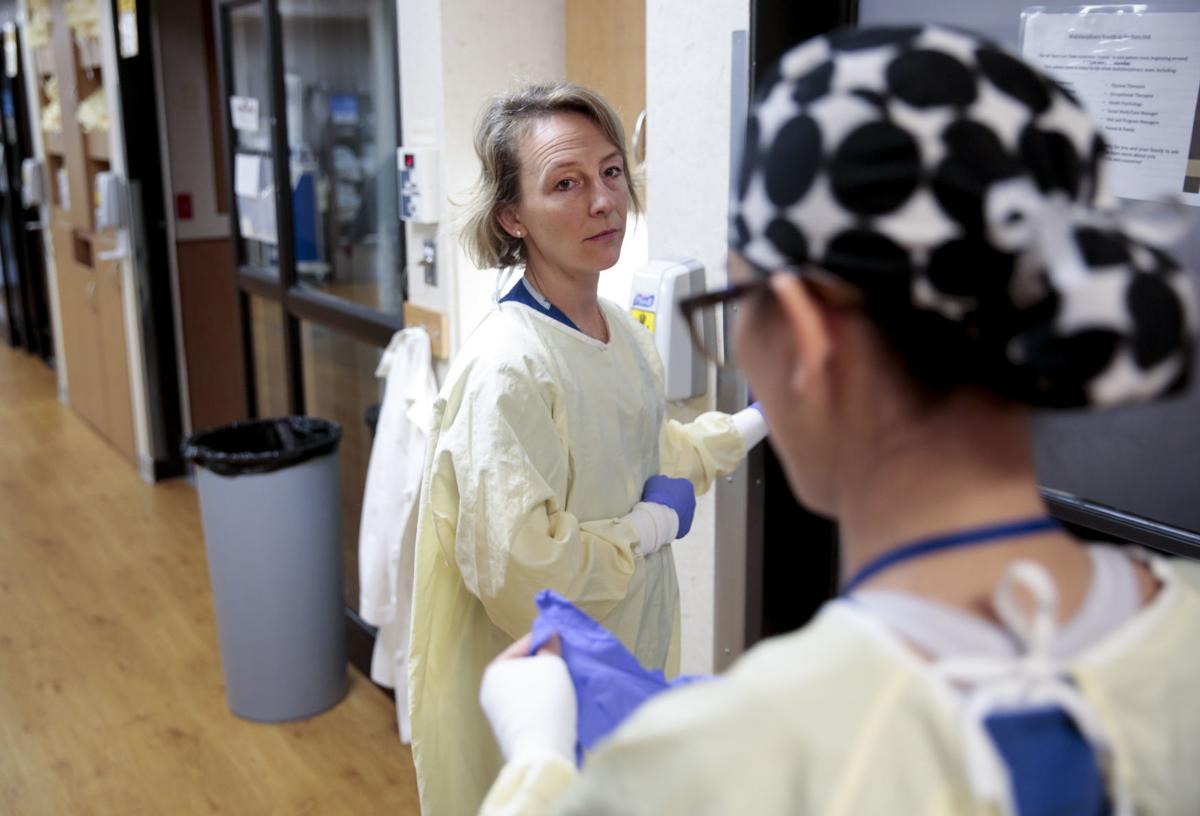 Dr. Angela Gibson, talking with Dr. Natalie Liu, a surgery resident at UW Hospital, said burn care is a good fit for people who flourish on adrenaline. The circumstances that cause serious burns are unfortunate, but doctors and other staff get to help patients heal their skin, the body's largest organ. "We thrive in that environment," she said. 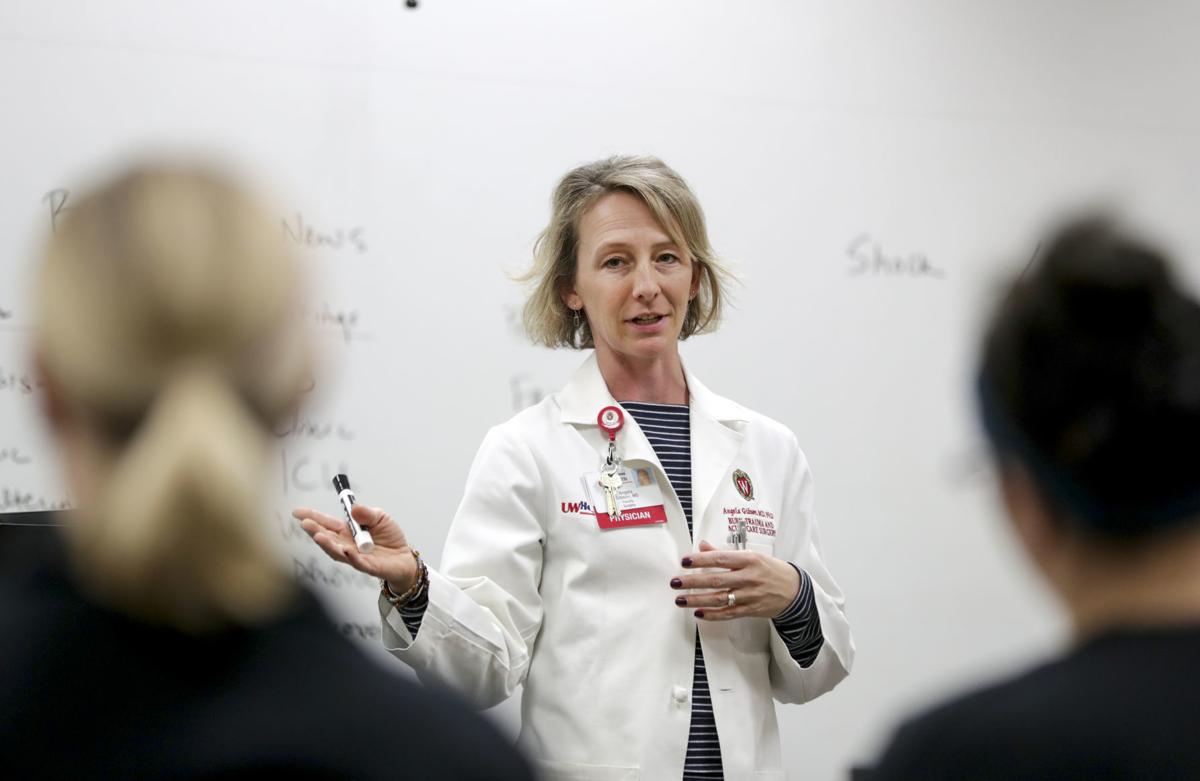 Dr. Angela Gibson talks to students at the UW School of Medicine and Public Health about breaking bad news to patients. "Setting is huge," she said. "Even if you're in the emergency department, you can find a small, quiet place to go." 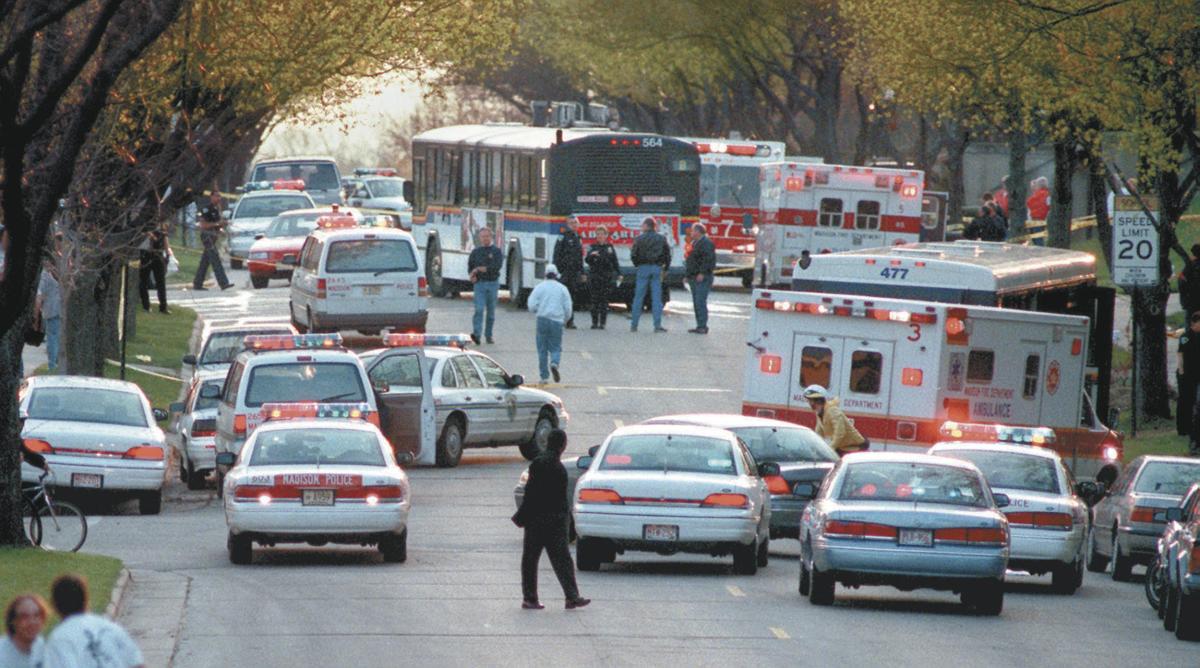 First responders converge on a Madison Metro bus after it was set afire by Salim Amara on April 19, 1998. The conflagration badly injured four passengers and the bus driver. Amara was also burned.