James P. Roberts first noticed Madison’s proliferation of tiny libraries about five years ago, during bike rides around the city.

An avid reader and author, he was intrigued. The bookshelves were so interesting that he began noting where he saw the little libraries on a large map of Madison.

“I’ve been a book lover all my life,” Roberts said. “I used to hunt regular libraries, and this is just an extension of that.”

Madison now has more than 400 of the Little Free Library installations, by Roberts’ count. Of those, more than 200 are officially registered with the umbrella organization, which got its start here eight years ago and has grown into a nonprofit with 75,000 registered libraries in 85 countries worldwide.

Todd Bol created the first little library in 2009 in the back of his garage in Hudson, a city about 243 miles northwest from Madison. He did it to honor his mother, a former schoolteacher who died in 2001. Then he had a garage sale, and people kept asking him if they could buy it.

“I built it to celebrate my mom’s life,” he said. “I had a garage sale, and people got so excited and thrilled about (the library). That excitement became a passion for me, and Madison was the first key launching point.”

He teamed up with Rick Brooks of Madison and, by 2010, the two had created Little Free Library.

The bookshelves, often creatively decorated to reflect the stewards’ literary interests or the houses they’re in front of, are full of free books for passersby. People can take as many as they wish, and leave some books behind for the next reader who comes along. The organization says millions of books are exchanged each year.

With only about half of Madison’s little libraries officially registered, it can be challenging to find them all. Roberts took it upon himself to find and document their locations, and he saw his map quickly filling up. To this day, he remains the only person with a comprehensive list of Little Free Library locations in Madison.

“The idea behind it is just so wonderful — a way to bring literature to people who don’t normally have it available,” said Roberts, 58, who eventually became involved in the organization. He is now one of the group’s Facebook page administrators, along with Megan Hanson, who works in its marketing and communications unit.

One of Little Free Library’s missions is to increase book access to low-income children by providing books in neighborhoods where they are scarce. Its website cites research showing that children who grow up in homes without books are typically three years academically behind children who have books in their homes.

“The only way we’ll have a strong democracy is if we have an educated society,” Bol said. “School systems just don’t have enough resources for that, and so it’s up to neighborhoods to step it up. Little Free Library is made of people who help their neighborhoods get educated.”

The group also aims to inspire a love for reading and build a sense of community. As more libraries are built, their stewards tell stories of many people they’ve met because of them, Roberts and Hanson said.

Hanson thinks it’s because the libraries offer a way to connect.

“Entertainment is very private, and a growing feeling of isolation in neighborhoods is part of the reason why Little Free Libraries is so appealing,” she said. “They provide a thoughtful, fun way to not only say, ‘I love books,’ but to want to share them. There’s an unspoken need (the libraries) managed to fill. That’s a really powerful thing, and I think that’s why it spread.”

As the number of libraries have increased nationally and across the world in recent years, Bol thinks much of the organization’s success stems from how quickly it took off in Madison.

“If we hadn’t had a success in Madison, we wouldn’t have continued,” he said.

As it’s grown over the years, Little Free Library leaders have started to look toward other ways to promote literacy. Programs include: the Impact Library Program, which leaves book-sharing boxes outside of libraries; Kids, Community & Cops, a program that helps officers and civic leaders build positive interactions with children by giving them books; and Action Book Club, a club that reads books on relevant topics and offers participants a chance to do related community service work.

How to register your library

If you'd like to register your Little Free Library with the national organization, go to https://littlefreelibrary.org/ and select "Register." Registering your library requires buying a charter sign for about $40. You can also add your library to the world map while on this web page.

Bol also hopes that more little libraries will continue to be built. He’d like to see one in every neighborhood, everywhere.

“I want to see it ignited around the world. We all do better when we all read better, and this shows that people are taking charge in their communities,” he said. “Wherever people are, there shall be books.”

Want to see your little library in this gallery?

To submit your library, please email a photo and address (including zip code) to wsjeditor@madison.com or share it with the Wisconsin State Journal on Facebook.

Want to see your little library in this gallery?

To submit your library, please email a photo and address (including zip code) to wsjeditor@madison.com or share it with the Wisconsin State Journal on Facebook.

Go to madison.com to see the first in a series of photo galleries of Madison's Little Free Library locations.

The first Little Free Library in Madison outside Cafe Zoma acted as a starting gun for a project that says "Take a Book, Leave a Book" that now covers all 50 states and 30 countries.

The little pantries are a way for communities to rally together and give back to those who need a little helping hand.

A row of 10 Little Free Libraries in front of Leopold Elementary School is operational again after being vandalized this summer.

The Little Free Library movement is celebrating its 30,000th library.

Executive Director of the Literacy Network Jeff Burkhart announced the grant from the Oscar Rennebohm Foundation Thursday and said it is the largest grant the network has received in its 44 years. 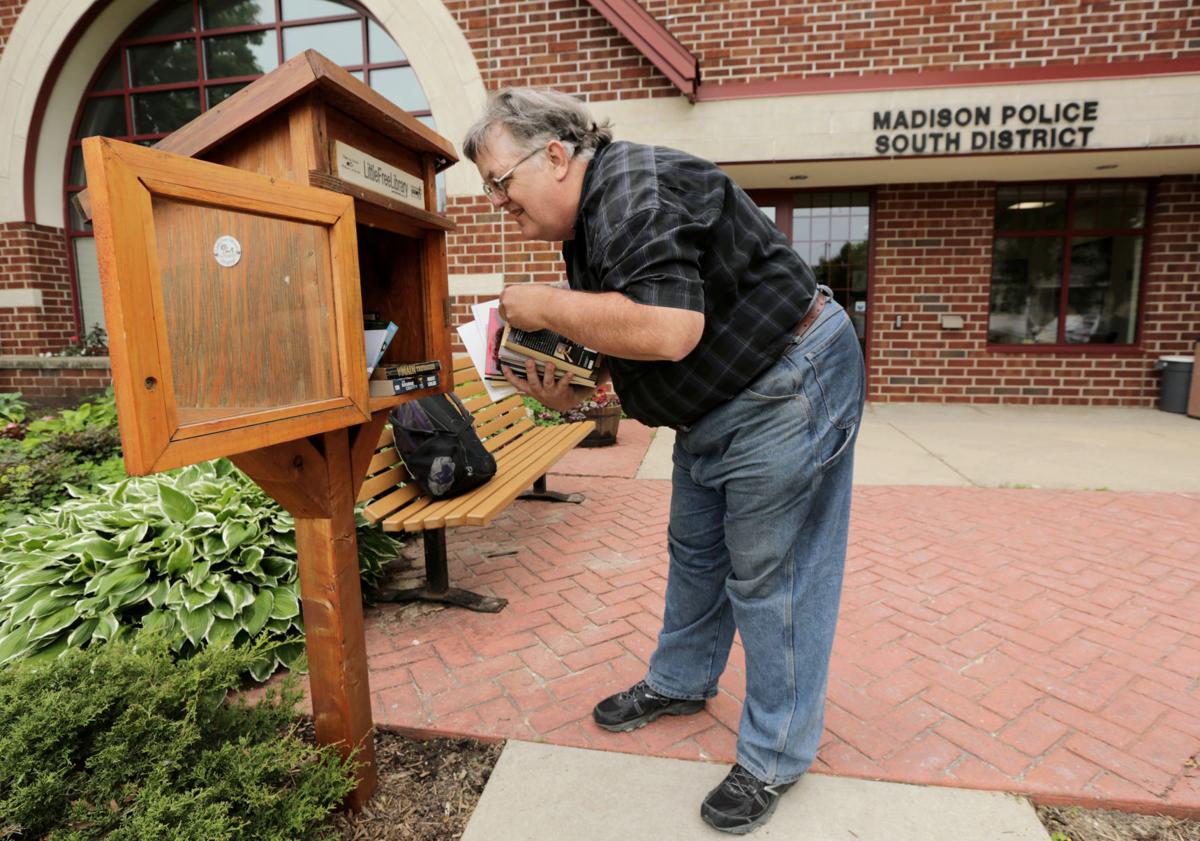 James P. Roberts, 58, of Madison drops off books and checks out the reading material in the Little Free Library outside of the Madison Police Department's South District police station. 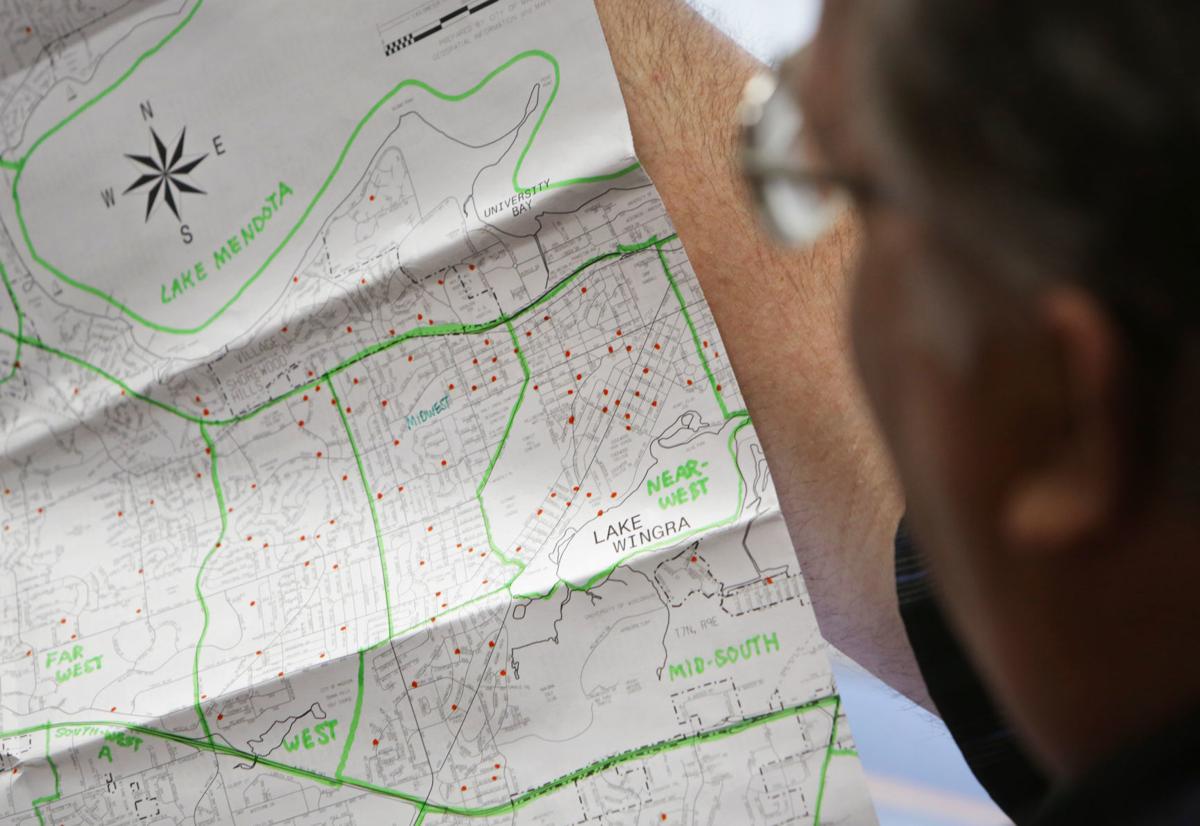 James P. Roberts shows a map of Madison where he has located all of the Little Free Library locations. Roberts has been mapping the neighborhood book exchanges for five years. 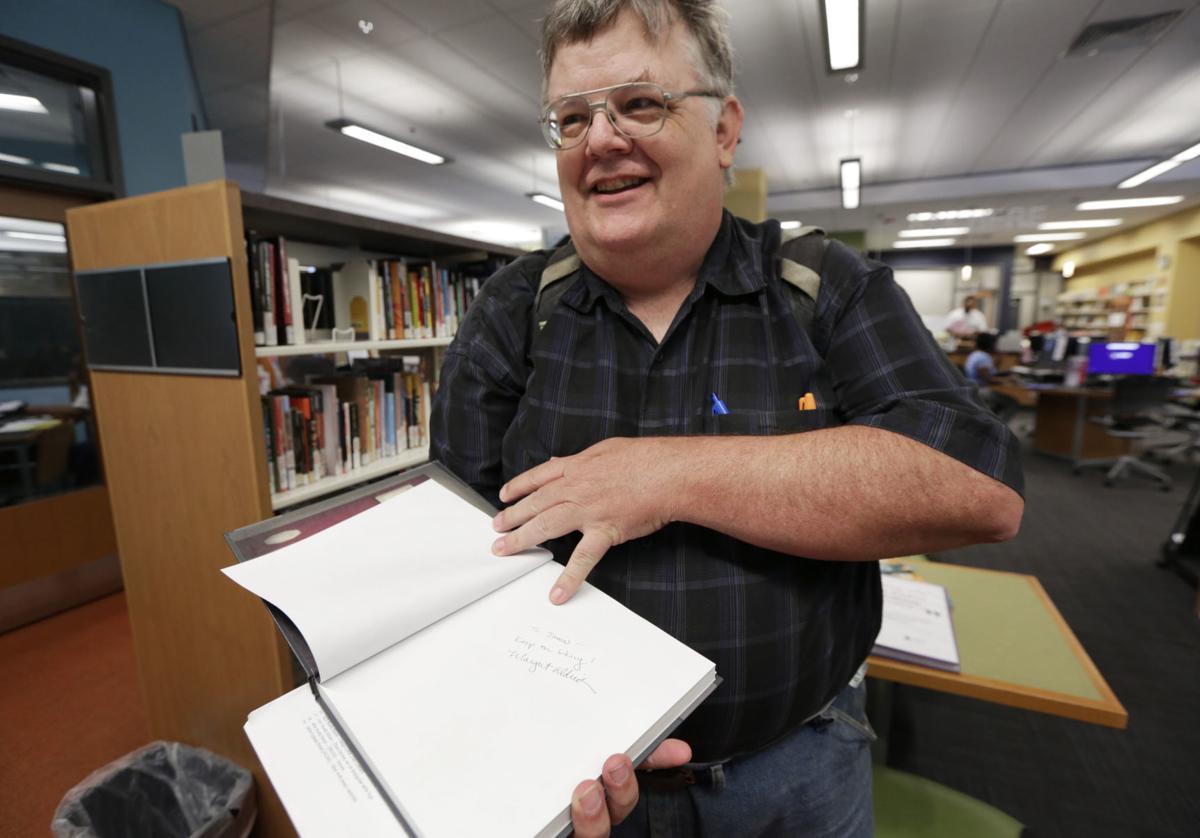 James P. Roberts has a signed copy of the book "The Little Free Library Book" where the author, Margret Aldrich, wrote a message to him that says "To James - keep on biking!" 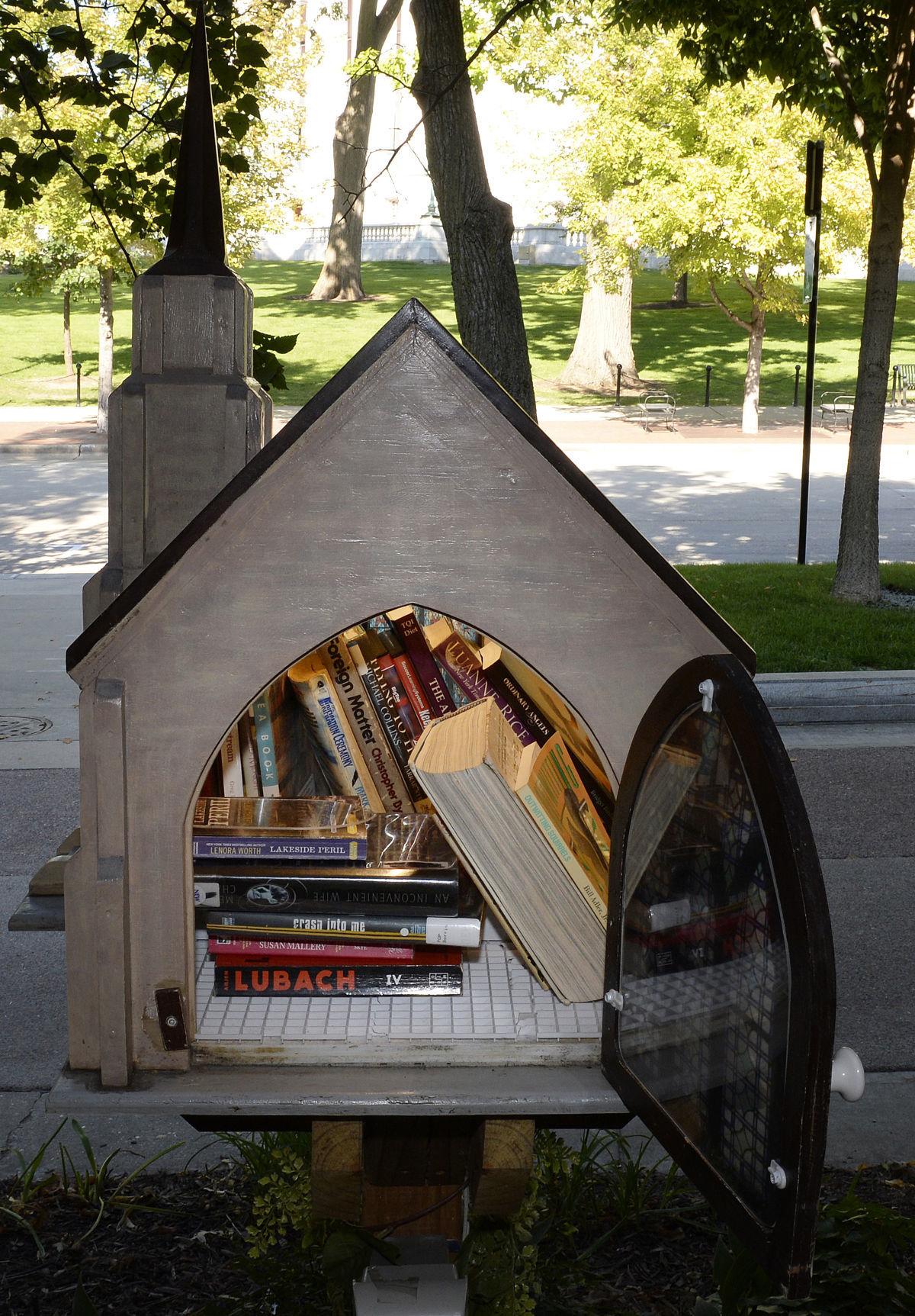 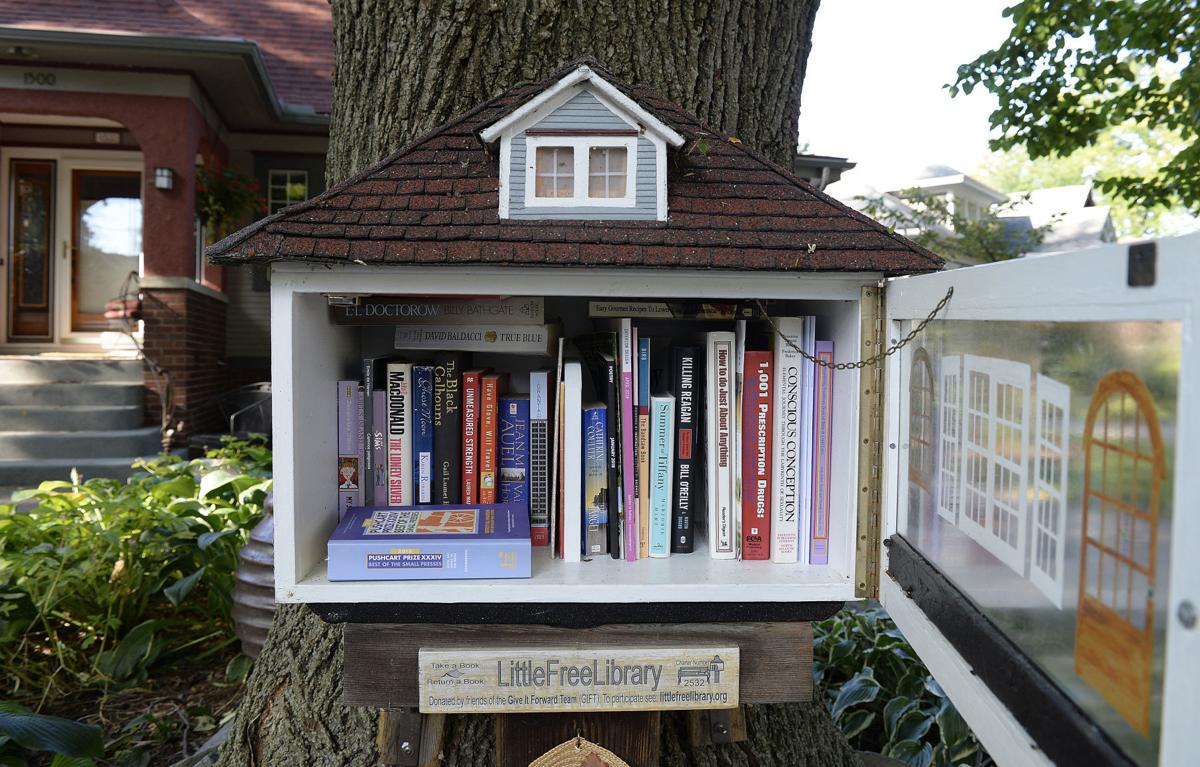 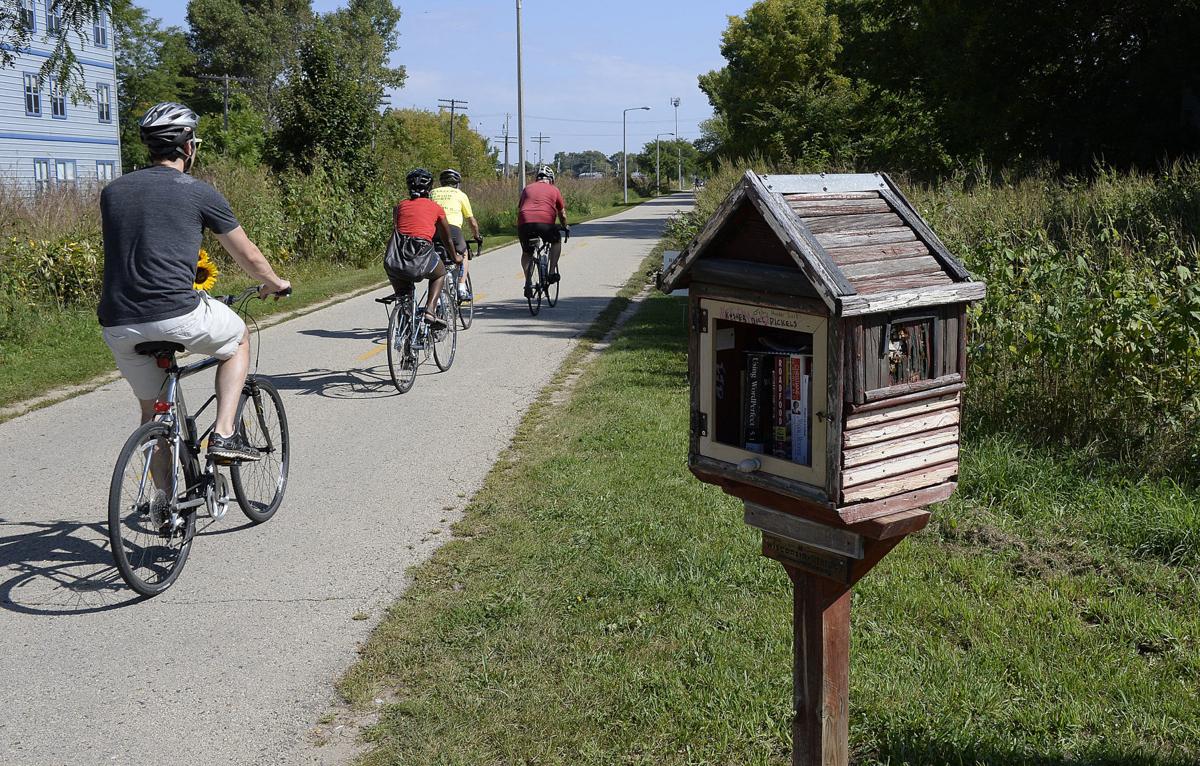